Yalitza Aparicio, the star of the Netflix film "Roma," is the Cinderella story of this Oscar season. Aparicio is the first indigenous Mexican woman nominated for best actress.

"I heard my name, and I just started crying because of the excitement," Aparicio said in Spanish through a translator in an interview with ABC News' "Nightline" co-anchor Juju Chang.

When asked what she thought about the state of representation in Hollywood, Aparicio said, "There are still so many characteristics that aren't reflected on screen, and the fact of sharing this category with women who are mostly white -- well, it's flattering to be in that category." 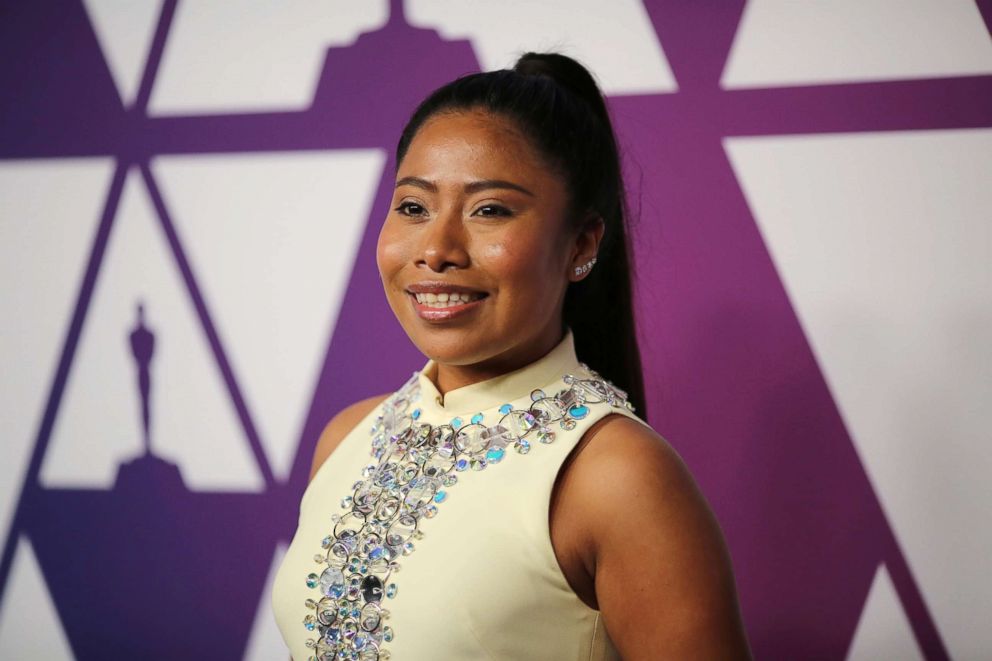 The 25-year-old first-time actor has also made strides in Mexico, where she is among the few indigenous women to ever make the cover of Vogue Mexico, on which she appeared in December 2018.

"When I was young, and I would watch television and would always see women who were so different from the ones I knew and who looked like me," she recalled through a translator.

In "Roma," which was shot in black and white and entirely in Spanish, Aparacio plays Cleo, a housekeeper and nanny. 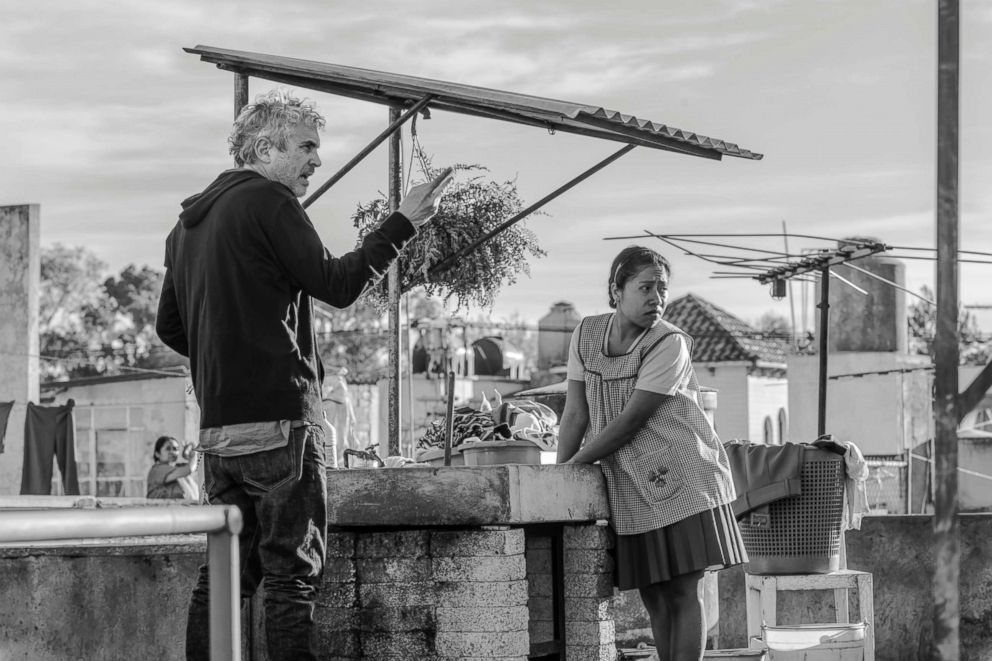 Netflix
Director Alfonso Cuaron and actress Yalitza Aparicio are pictured on the set of the Netflix film, "Roma."

The movie is a look at Cleo's intimate inner world and shows her relationships with the three young kids she cares for and her boss Sofia, played by classically trained actress Marina de Tavira, who is nominated for a best supporting actress Oscar.

De Tevira said she felt especially connected to her character's line about women having to take care of themselves.

"When [director Alfonso Cuaron] told me that line I really said I can really relate to this. I've seen it I've seen it in my mother. I've experienced it myself I've seen lots of women going through and I always ask myself why is this," de Tavira told Chang. "Why are women and children left so vulnerable in life?" 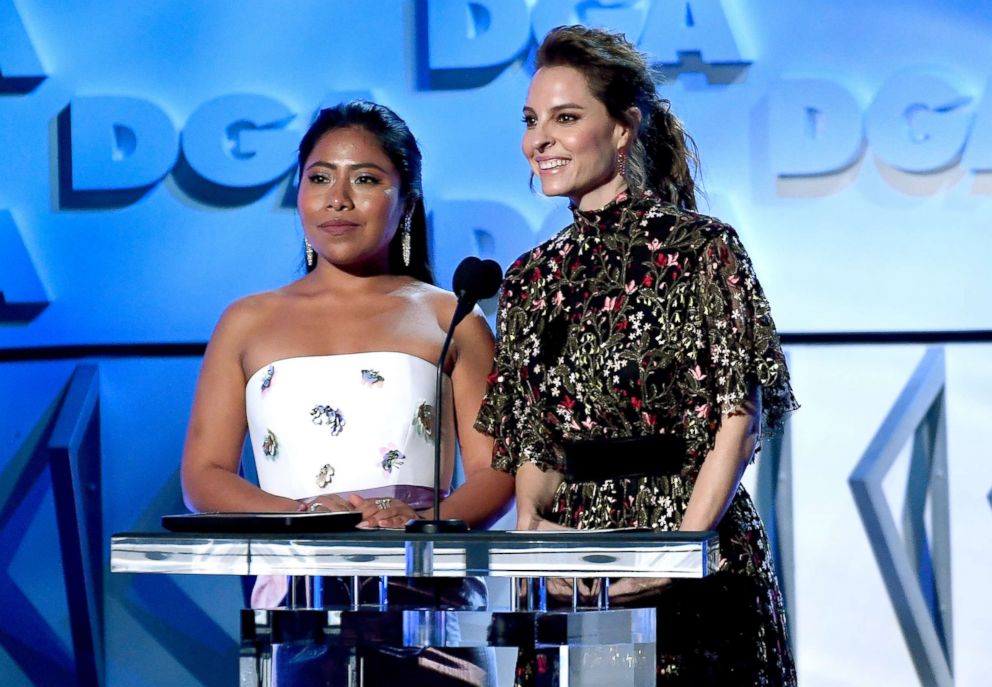 The film, which Cuaron wrote and directed, is the Academy Award-winning director's love letter to his nanny who helped raise him.

Aparicio set aside her career as a teacher to audition, moved by her own mother's sacrifices: leaving her own children to take care of others.

"I was inspired by her work. The reason why I chose to do the film was to pay tribute to her so she would realize how valuable her work is. Once I was filming, I tried to remember moments in which I saw how she did her work and thus achieve the character," Aparicio said through a translator. "I had the best mom in the world. She always taught me that just because we didn't have the means, did not mean you couldn't fulfill your dreams."

"Roma" has spurred a new wave of activism fighting for a national domestic workers' "Bill of Rights."

Cuaron even shot a public service announcement in conjunction with the National Domestic Workers Alliance (NDWA) and Participant Media, which also produced "Roma."

Adela Seally is a nanny living in the Bronx and works full-time caring for a 7-month-old in the suburbs of New York. She says she is fortunate in her situation, and advocates for others who often don’t have a voice. She is traveling to Los Angeles for a special Oscars viewing party on behalf of NDWA.

"I hope when people see this film they see there are many Cleos out there," Seally said. "To be able to embrace the profession as a real profession... I think would help people have more respect and dignity and encourage people to be happier about their profession."

"It's the work that happens inside of our homes that makes it possible for all of us to go out do what we do in the world every day knowing that the most precious elements of our lives are in good hands," Ai-Jen Poo, executive director of the National Domestic Workers Alliance, said. "We have to change policy and politics but we also have to change culture. The fact that we've so devalued the work of caring, and the work that goes into supporting families is a cultural phenomenon."

To de Tavira, Cuaron's "Roma" "was just about time for someone to say thank you" to people who are sometimes invisible.

"We need to be grateful because -- for example, for me, that I'm here, because there is a woman that lives with me and of course a father and my own mother. But that woman is like really the one that knows everything about what about schedule's about food about everything about illness and we really share motherhood," she said.

And as for the upcoming Oscars, both de Tavira and Aparicio say they never could have dreamed that this could happen to them.

"Sometimes my friends would joke like, 'What would you say if you won an Oscar or if you were nominated?' And I was, I never even dared to joke about that. It was like so far away from any reality I could ever imagine. So really, it's, like, I don't know. I'm still waiting to wake up," said de Tavira.

"It's been amazing to get to visit new places," Aparicio said through a translator. "I've had a chance to travel all the way to the other side of the world, a thing I never expected to do."