David and Sabrina Jaramillo took their family to an amusement park on Saturday to celebrate their eldest son's birthday, hoping to "have a good time." But a tragic accident on a water ride left one of their children dead and another in a medically induced coma.

"He was just taken from us," David Jaramillo added. "Love your kids. You just don't know when they'll be taken."

The Jaramillos had gone on several other rides before getting in line for the Raging River at Adventureland Park, a family-owned amusement park in Altoona, a suburb of Iowa's capital city, Des Moines. The parents boarded a raft with their 15-year-old son, David; their 14-year-old son, August; their 11-year-old son, Michael; and their niece, Nyla. As they buckled their seatbelts and embarked on the river rapids ride, their tube suddenly flipped over, leaving them all trapped underwater.

"I see the silhouettes of my sons trying to grab each other, grab us," the father recalled. "They want us to help them. We couldn't do it."

Both parents as well as one of their sons and their niece ultimately managed to break free and swim to the surface. But David and Michael were still stuck, and no one could reach them.

"I'm drowning," the father said. "The river was so intense, it was like a suction."

The family screamed for help. Witnesses and first responders jumped in the water and eventually helped get the other kids out of the tube.

"Our thoughts and prayers are with the Jaramillo family as they navigate the heartbreaking loss of their child," police said in a statement Monday. "Altoona Detective are working with the State Inspector and Adventureland Park to understand this tragic accident." 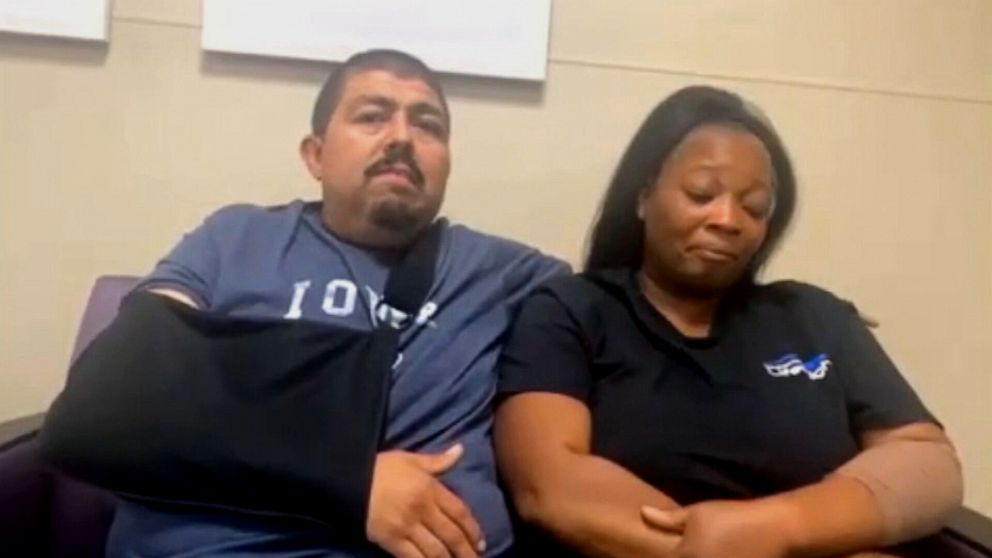 ABC News
David and Sabrina Jaramillo speak to ABC News for an interview that aired on "Good Morning America," July 6, 2021.

The Jaramillos described Michael as a "good kid."

"His heart was bigger than him," the father told ABC News.

"He was a baby, and I feel like Adventureland robbed me of my baby," the mother added, breaking down in tears.

Adventureland Park said in a statement Sunday that it was "saddened to learn of the passing of one Guest." An investigation into the deadly incident is ongoing and the ride remains closed for a "thorough inspection," the park said. The Raging River ride was last inspected on Friday and "was found to be in sound working order," according to the park.

"Adventureland is working closely with both the State and local authorities, and would like to thank them again for their efforts," the park added. "At this time, we ask for your thoughts and prayers for the Guest and their family, as well as for our team members who were onsite."

An attorney for Adventureland Park insisted that the Raging River ride is "safe."

"The Raging River ride has been in operation for nearly four decades," the attorney told ABC News in a statement Monday. "The ride was inspected by the State of Iowa the day before the incident and was in good working order."

MORE: What we know about the victims of the Surfside building collapse

But it's not the first fatal accident to occur on that ride. A seasonal employee, 68-year-old Steve Booher, was killed in June 2106 after falling onto the conveyor belt while helping guests get in and out of their rafts. The Iowa Occupational Safety and Health Administration fined Adventureland Park $4,500 for a safety violation, saying the park should install devices to ensure that ride assistants are positioned safely before operators let rafts advance, according to The Associated Press.

The Jaramillos have been in the hospital by David's side, waiting for their eldest son to wake up from the medically induced coma as he fights for his life. He turns 16 on Wednesday.

Meanwhile, their youngest son is struggling to cope with what happened.

"He's scared. It is a nightmare," the father told ABC News. "He closes his eyes and thinks about the water. When he wakes up, he realizes the nightmare's true. So there's no peace."