By Dr. Adjoa Smalls-Mantey
Share —
Sign up for our newsletters to get GMA delivered to your inbox every morning!

Since the Johnson & Johnson COVID-19 vaccine was granted emergency use authorization by the FDA, more than 450,000 people have been given the single-dose shot, according to the Centers for Disease Control and Prevention.

Unlike Pfizer's and Moderna's two-dose vaccines, the Johnson & Johnson vaccine uses another virus -- one that causes the common cold -- to deliver genetic information to cells.

Pregnant women were excluded in clinical trials of all three vaccines, and now many women who are expecting have been grappling with whether they should get vaccinated.

MORE: Why were hundreds of vaccine appointments canceled? Too many people cut in line.

The CDC has concluded they can receive the Johnson & Johnson one-shot vaccine after reviewing more than 200 pages of data provided by the company and the Food and Drug Administration.

Vaccine experts interviewed by ABC News said although pregnant women are advised against getting other live-virus vaccines, such as the one for measles, mumps and rubella, because they can pose a theoretical risk of infection to the fetus, the Johnson & Johnson vaccine doesn't contain live virus and should be safe. 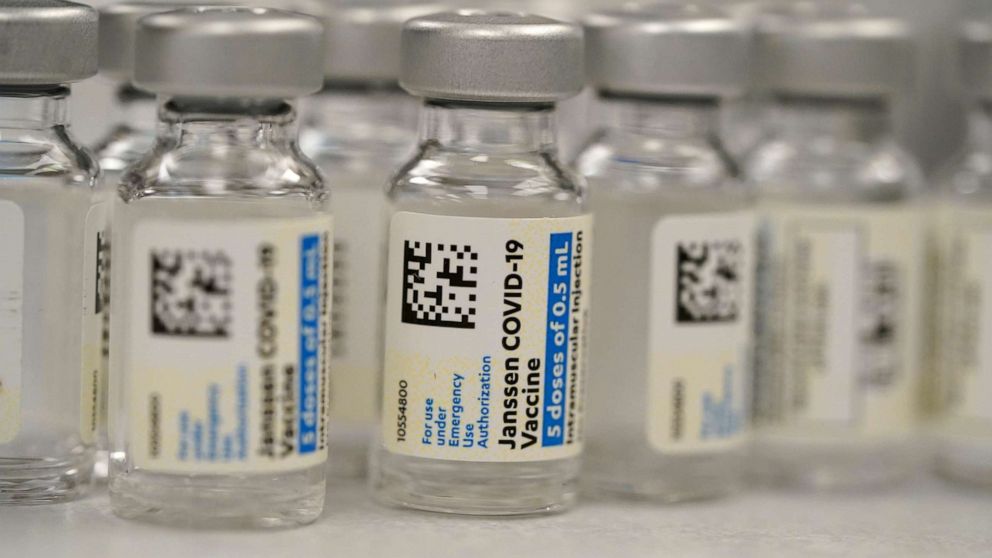 The vaccine contains an inactivated adenovirus that cannot replicate, a type of virus that can cause the common cold, called Ad26. The Ad26 vector contains a piece of DNA for the SARS-CoV-2 spike protein that triggers an immune response.

"Pregnant women certainly are asked not to receive live attenuated viral vaccines," said Dr. Paul Offit, a professor of pediatrics in the division of infectious diseases at Children's Hospital of Philadelphia and a member of the Food and Drug Administration's vaccine advisory board. "But this isn't an attenuated virus. It's a replication defective virus and doesn't reproduce itself."

This same type of vaccine has been authorized for Ebola, and has been studied extensively for other illnesses -- and for how it affects women who are pregnant or breastfeeding.

"Looking at the actual adenovirus vectors, this actually is something that has been studied, so it's a more 'tried and true' approach," said Dr. Jessica Shepherd, an obstetrician/gynecologist and chief medical officer of VeryWell.

Although any new vaccine carries some risk, experts said that for pregnant women the risk posed by COVID-19 is likely much more severe.

"It is unsettling that pregnant women were not included in the pre-approval trials," Offit said. "You don't have that information, so you're learning now as you go." 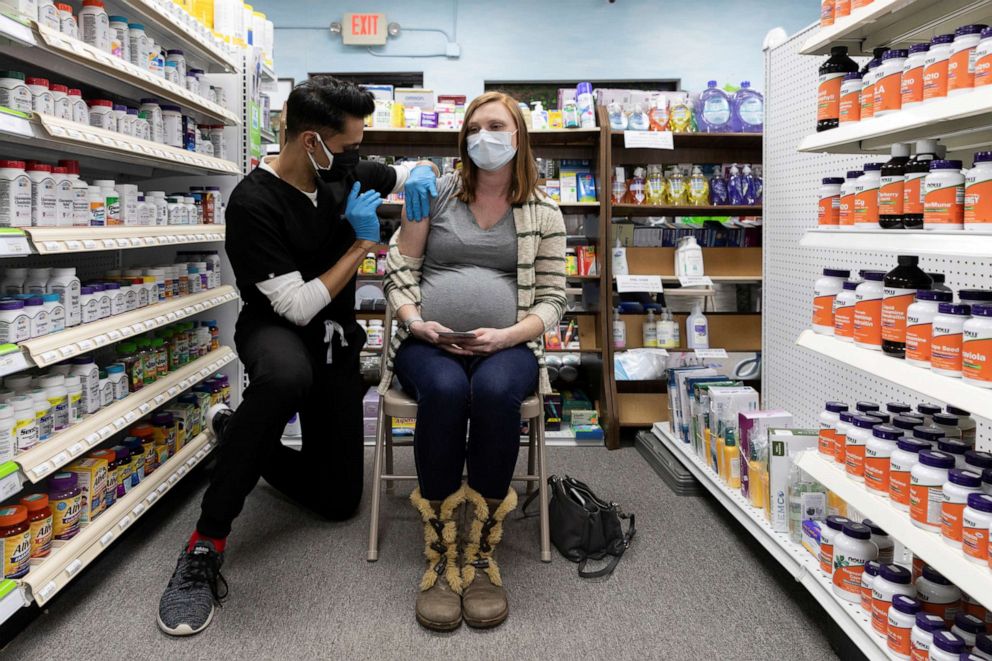 Hannah Beier/Reuters, FILE
In this Feb. 11, 2021, file photo, a pregnant woman receives the COVID-19 vaccine at a pharmacy in Schwenksville, Pa.

"But on the other hand," he added, "a pregnant woman who gets infected with SARS-CoV-2 is more likely to suffer severe [illness from the] disease than a woman of the same age who is not pregnant."

Several studies have shown that pregnant women are at an increased risk of high blood pressure, blood clots, pre-term delivery, severe illness and death from COVID-19.

At this time, the CDC recommends that pregnant women be prioritized for vaccinations and encourages them to speak to their doctors about the risks and benefits of a vaccination.

MORE: Dr. Fauci reflects on the pandemic's 1-year mark and how to get back to 'normality'

According to Shepherd, the primary immediate risks from the vaccine would be side effects in a person that are "very typical even outside of pregnancy." The most common side effects reported in the Johnson & Johnson vaccine trials were pain at the injection site, headache, fatigue, muscle aches, and nausea lasting one to two days.

Current data shows there's minimal risk of long-term adverse effects on a baby born to a mother who received the vaccine during pregnancy.

The vaccine can be taken during any trimester. Since other vaccines are recommended during pregnancy, the CDC currently recommends spacing out vaccine appointments a few weeks apart, if possible. 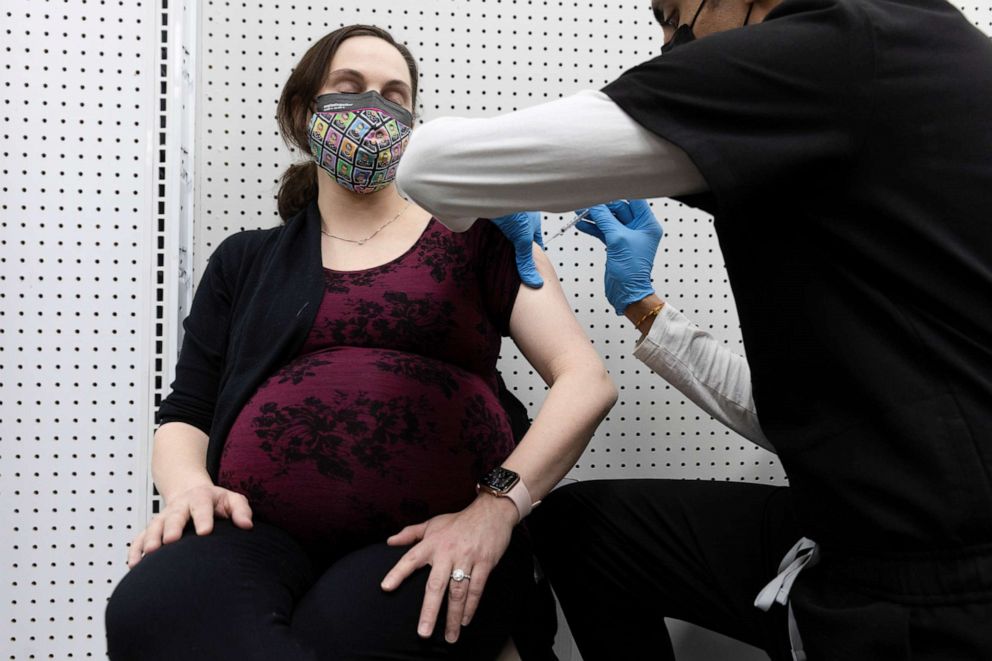 Hannah Beier/Reuters, FILE
In this Feb. 11, 2021, file photo, a pregnant woman receives the COVID-19 vaccine at a pharmacy in Schwenksville, Pa.

The American College of Obstetricians and Gynecologists and The Society for Maternal-Fetal Medicine share the same stance as the CDC, emphasizing that vaccination is a personal choice.

"It is OK if a patient decides on her own that she wants to get the vaccine in pregnancy, with the understanding that she knows the potential risks," said Shepherd, who advises all pregnant women to have a "thoughtful discussion" with their doctor.

"We do have science that clearly indicates that vaccination does decrease disease process, disease progression, and death," Shepherd added. "Risk vs. benefit, in the end at this point, is transmission and death vs. protection."

Adjoa Smalls-Mantey, M.D., D.Phil., trained in immunology, is a psychiatrist in New York City and a contributor to the ABC News Medical Unit. ABC News' Sony Salzman contributed to this report.