After the Biden administration finished one of the largest airlifts in the nation's history Aug. 30, organizations tasked with helping Afghans arriving in the U.S. are scrambling to ramp up operations following years of downsizing due to the Trump administration's slashed refugee program.

As Afghans flow in the country, organizations are asking the Biden administration to increase funding to help them recover and expand operations to accommodate the refugees.

Most of the 40,000 refugees who have arrived from the flights out of Kabul are Afghans, and the total number is expected to surpass 50,000 in the coming days and weeks, Department of Homeland Security Secretary Alejandro Mayorkas said Friday.

The refugee resettlement agencies that help transport individuals and families from the airport, provide them with housing and aid them with finding employment are facing numbers not seen in the last four years, according to Kristyn Peck, CEO of Lutheran Social Services of the National Capital Area, a nonprofit that provides community services, including refugee and immigrant resettlement.

"The evacuation of Afghan allies was chaotic, but their settlement doesn't need to be," said Krish O'Mara Vignarajah, CEO of Lutheran Immigration and Refugee Service, one of the nine nonprofits partnered with the Department of State to resettle refugees.

MORE: Trump to cut refugee admissions to new record low while those accepted left in limbo

But LSSNCA has identified a $1.8 million funding gap it needs to close to fully resettle the 500 refugees it has helped over the last month. And that number doesn't include funding for those still arriving, Peck said.

In 2020, the Trump administration slashed refugee admissions to a historically low ceiling, capping the number allowed in the country at 15,000 -- 3,000 people fewer than the prior fiscal year and roughly 55,000 fewer than the last cap set by former President Barack Obama. That also caused reductions in government funding of refugee organizations, which receive federal funding per refugee they help with resettlement. As a result of the lower cap, organizations received less funding because they were resettling fewer people, according to LIRS.

In response to smaller budgets and a lower demand for services, many organizations were forced to close offices and reduce staff. 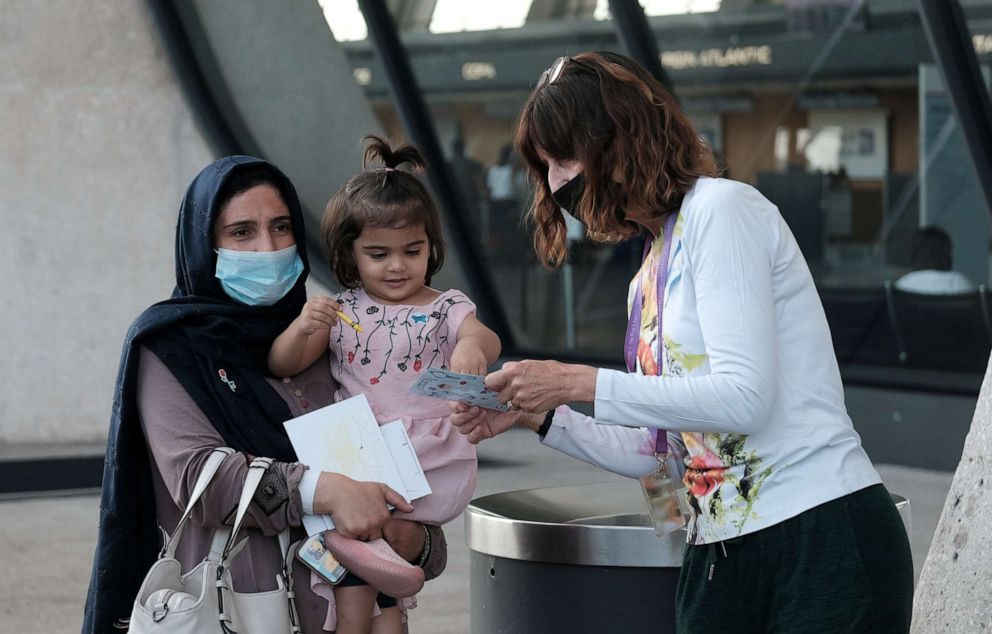 LSSNCA, based in ​​Washington, D.C., was resettling 500 people a year under the Trump administration, down from 1,500 in the last year of the Obama administration. The U.S. was on track to admit the lowest number of refugees in the program's 41-year history after President Joe Biden backtracked in April on his promise to admit more refugees, leaving former President Donald Trump's 15,000 refugee cap in place.

After pressure from Democrats on Capitol Hill, Biden reversed course in May and raised the refugee number to 62,500. But ramping up in time to meet the growing need remains an issue.

World Relief, another of the State Department's partner agencies for resettlement, had to close a third of its U.S. offices as a result of the Trump administration's caps, according to Senior Vice President of Advocacy and Policy Jenny Yang. Rebuilding World Relief's capacities to meet the sudden demand for services has been a significant challenge, Yang said.

"When you have limited capacity, even in the U.S., or more strained capacities in the U.S. to receive refugees, then we're dealing with now the work of building up programs again," Yang said. "I think all of that is very challenging."

Peck said the mobilization has been like going from being the local corner store to becoming a Target, saying LSSNCA's staffing structure makes sense for 500 people a year, not 500 people a month. The organization is being forced to completely restructure the way it functions to accommodate the number of refugees arriving, Peck said.

"We are providing services in real time while we are simultaneously meeting every single morning on, 'What policies need revising? What processes need revising? What doesn't work at this scale? What new positions do we need to bring on?'" she said. "It is a daily process of improvement so that we can rethink our systems."

Compounding the funding shortfall is the fact that the majority of Afghans coming to the U.S. hold humanitarian parole status because they have yet to be fully processed for their special immigrant visas or through the refugee program. The federal government provides 90 days assistance, including $2,275 per person admitted under humanitarian parole status -- $1,225 in direct assistance to the refugee and $1,050 to the resettlement agency for administrative costs to provide resettlement services, according to LIRS.

But those with humanitarian parole status are not eligible for the same federal benefits -- such as financial, food and health care assistance -- as SIV holders or those in the refugee resettlement program, and refugee organizations must cover additional costs. 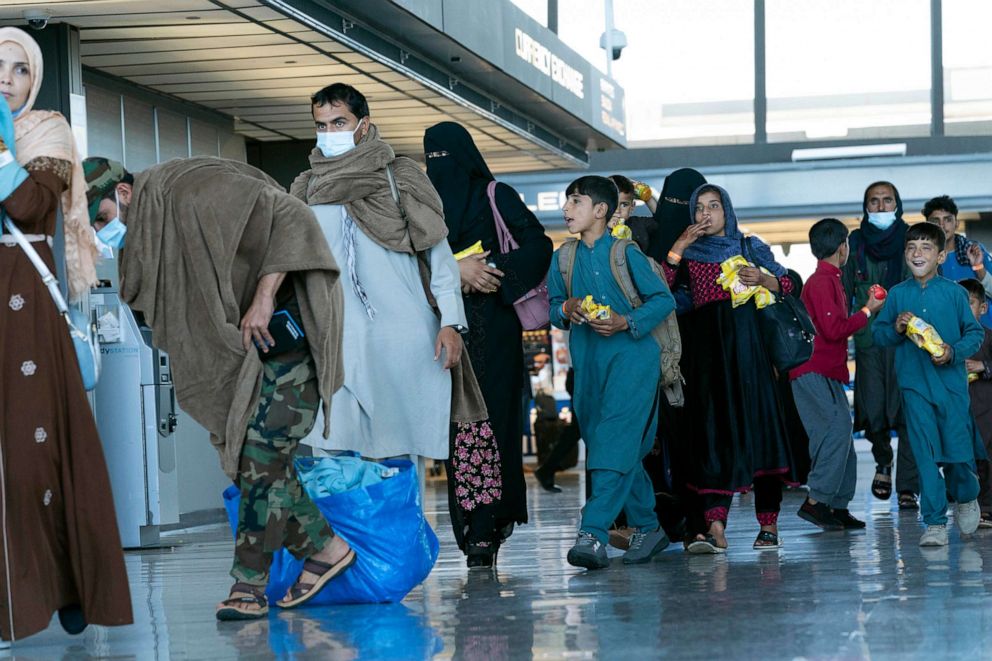 Jose Luis Magana/AP
People evacuated from Kabul, Afghanistan, walk through the terminal before boarding a bus after they arrived at Washington Dulles International Airport, in Chantilly, Va., on Sept. 2, 2021.

For example, Peck said a family her organization was helping to resettle needed immunizations in order to keep their parole status. But because they did not qualify for federal benefits through the Office of Refugee Resettlement, the organization had to cover the costs at about $300 per person.

Communities and businesses across the nation have stepped up to donate money or items and offer volunteer services to help support the refugee organizations as they grapple with the sudden influx of refugees. Airbnb announced on Aug. 24 it would provide free housing to 20,000 Afghan refugees worldwide, and the same day Walmart made the pledge to donate $1 million to three organizations helping to resettling refugees, veterans and their families.

LSSNCA and LIRS have both relied on the Airbnb partnership to secure temporary housing for arriving Afghans since finding housing on such short notice can pose a significant challenge, according to both of the organizations' CEOs.

Peck said the LSSNCA had to dedicate a team of volunteers to unpack and organize private donations that cover the floor and reach to the ceiling at the group's office.

But while the outpouring of support from private companies and individuals has helped make a difference, refugee organizations say it isn't enough for a crisis of this size. 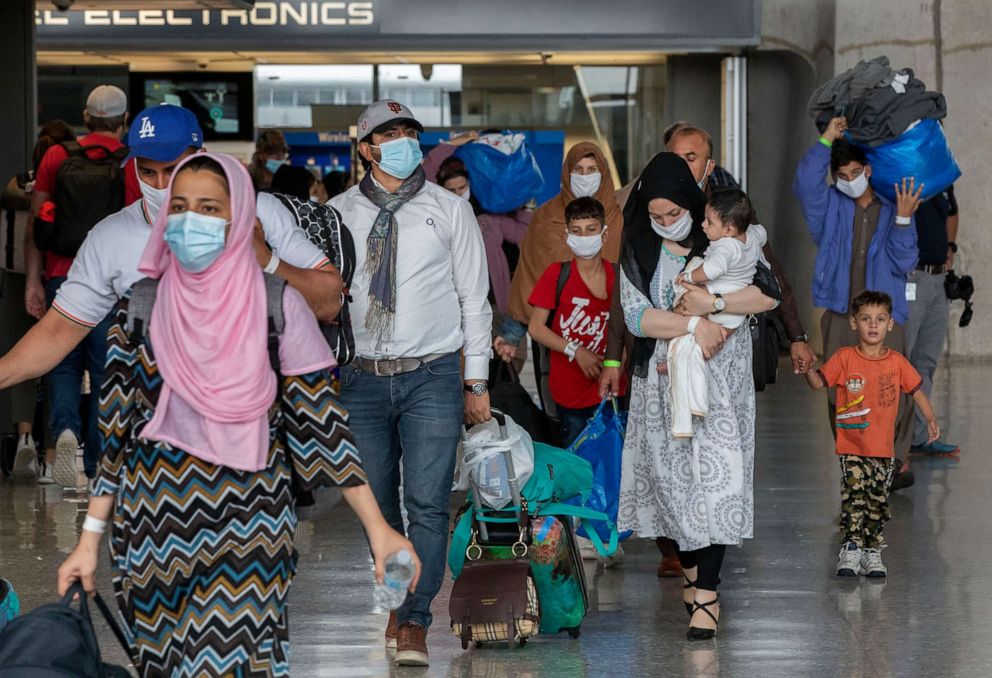 Gemunu Amarasinghe/AP
Families evacuated from Kabul, Afghanistan, walk through the terminal to board a bus after they arrived at Washington Dulles International Airport, in Chantilly, Va., on Sep. 1, 2021.

The organizations are calling on Congress and the Biden administration to guarantee funds for the resettlement of Afghans and to expand the same federal benefits available to refugees and SIV holders to those with humanitarian parole status.

Vignarajah said both Congress and the White House need to "adequately fund the resources for newly arrived families" in addition to being proactive about the legal status of those being admitted.

"The administration and Congress need to be forward thinking about their legal status," Vignarajah said. "That's going to have a huge impact on services and benefits they may be eligible for and what peace of mind we can give them."

On Aug. 16, Biden authorized $500 million for refugees and those at risk due to the Taliban takeover of Afghanistan. But it is not clear how much of that funding will be set aside for refugee agencies coordinating the effort to resettle Afghans in the U.S.

Mayorkas said Friday that America is "reestablishing its leadership in the world as a place of refuge," and the president announced the same day that former Delaware Gov. Jack Markell will be his point person for resettling Afghan refugees arriving in the U.S., serving as the coordinator for what the White House is calling "Operation Allies Welcome."

Also on Friday, Reps. Seth Moulton, D-Mass., and Don Bacon, R-Neb., introduced the WELCOMED Act which, if passed, would extend the same federal benefits as SIV holders to those admitted with humanitarian parole status.

Then on Tuesday, the Office of Management and Budget asked Congress to pass a short-term continuing resolution to secure $6.4 billion for processing Afghans overseas and resettling those arriving in the U.S. Afghans will receive benefits such as "assistance with housing and basic necessities, employment, English language training, medical treatment and more," an official said Tuesday.