It's been one month since 21 people were killed in the mass shooting at Robb Elementary School in Uvalde, Texas -- 19 children and two teachers. The shooting on May 24 has left the community of Uvalde, a city west of San Antonio, in mourning.

Among those killed were seventeen 10-year-olds, one 11-year-old, one 9-year-old and two fourth-grade teachers. One boy's family described him as "the life of the party," while one girl's family said she "had the biggest heart." One girl wanted to become famous on TikTok, while another wanted to be a marine biologist; another, a veterinarian. Among the deceased were also several sets of cousins.

This is how the families of some of the victims want their loved ones to be remembered.

Alexandria Aniyah Rubio, 10, was known as "Lexi," and was an honors student at Robb Elementary School.

When asked how she wants Lexi to be remembered, Kimberly Rubio, Lexi's mother, told ABC News that "Alexandria Aniyah 'Lexi' Rubio was driven, athletic, intelligent and fierce, with a beautiful smile that more often than not turned into a hearty laugh. That smile. When you think of her, remember her smile, and let that be a guiding light for change."

Lexi was killed in the attack on the same day she received a good citizen award and a certificate for being a straight-A student from her school, according to her family.

The day her daughter died, Kimberly Rubio wrote on Facebook, "We told her we loved her and would pick her up after school. We had no idea this was goodbye." 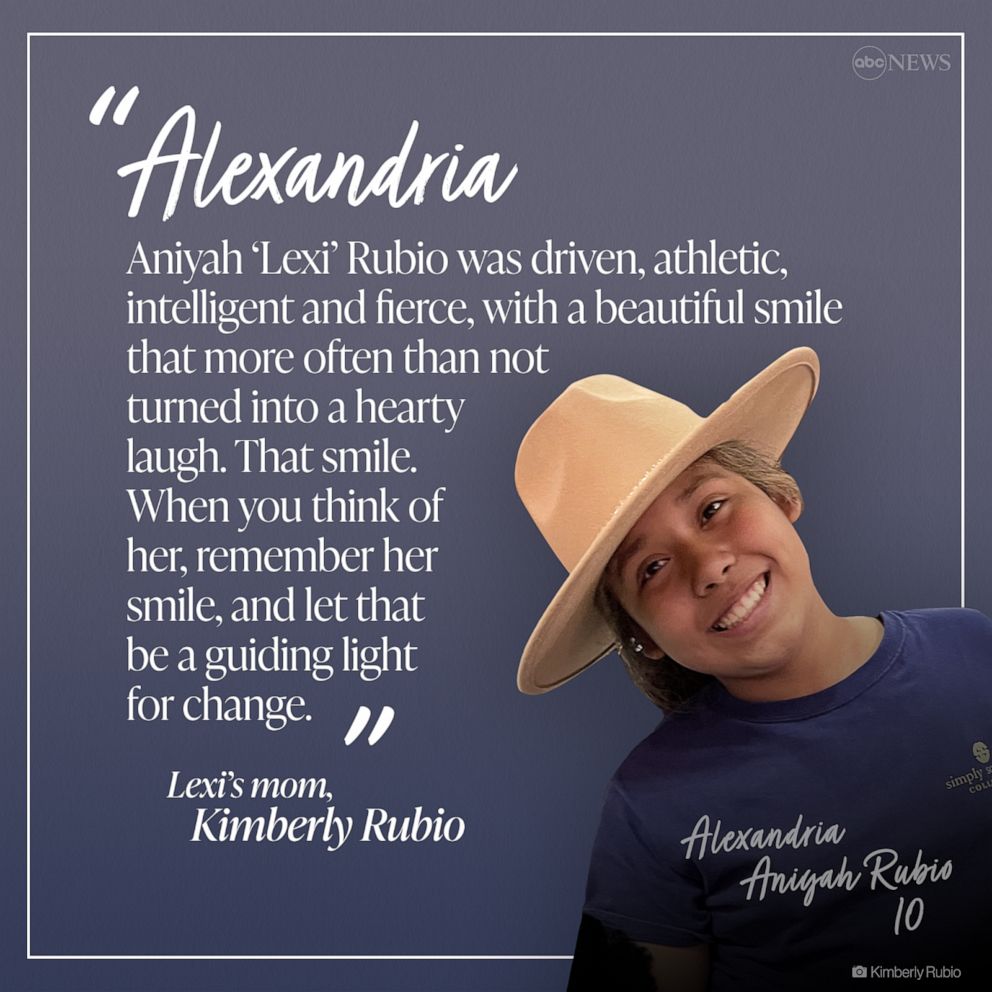 ABC News Photo Illustration, Kimberly Rubio
Kimberly Rubio on her daughter, Alexandria Aniyah Rubio, who was among those killed in the shooting at Robb Elementary School, May 24, 2022, in Uvalde, Texas.

Annabell Rodriguez, 10, was an honor roll student who shared a close bond with her sister, Anastasia, and her twin sister Angeli. Her favorite color was baby blue.

"She had a whole future in front of her. Ever since she was a little kid she wanted to be a veterinarian."

Gallegos told ABC News if there was a stray dog, her daughter would always try to help them. "I was so proud of her."

Gallegos described how Annabell's siblings have been dealing with the loss of their sister: "Anastasia has been taking it really hard. She's been crying every night. She doesn't really want to be in public. My other little one, she's still like lost. She doesn't understand what's going on." 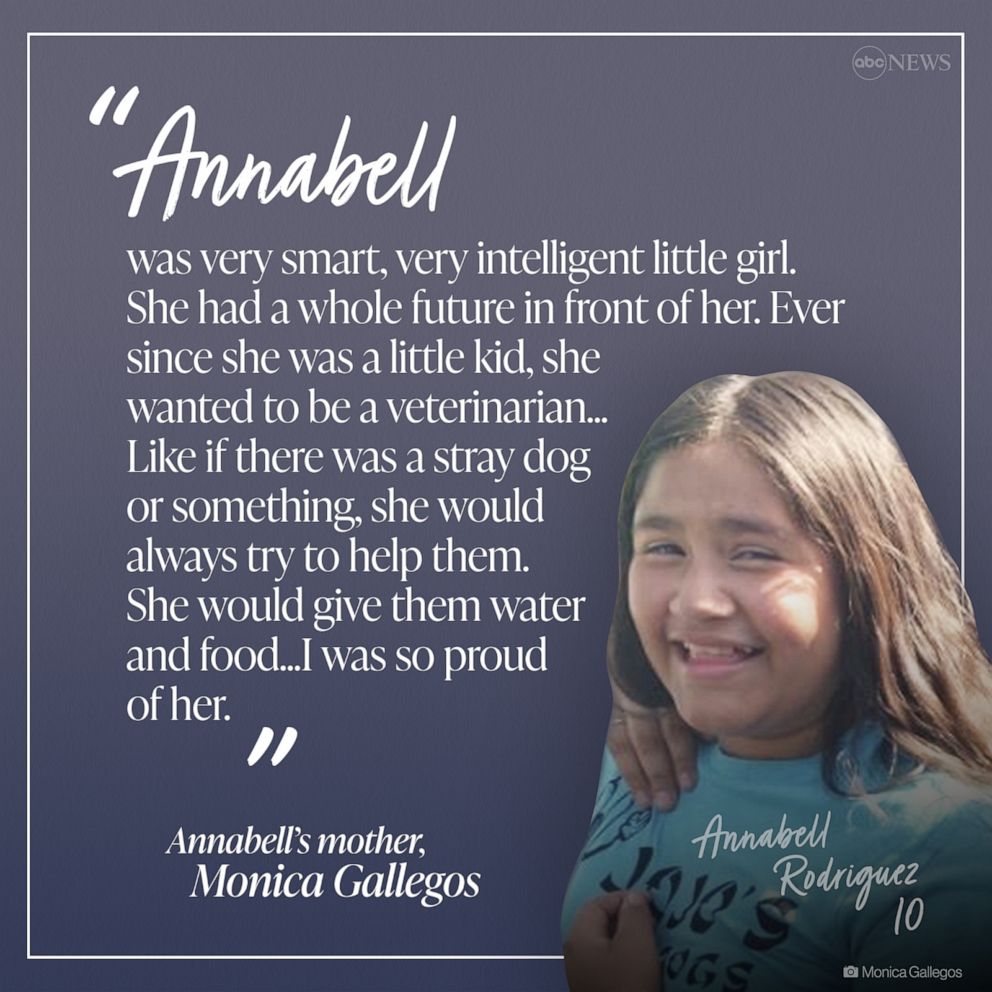 ABC News Photo Illustration, Monica Gallegos
Monica Gallegos on her daughter, Annabell Rodriguez, who was among those killed in the shooting at Robb Elementary School, May 24, 2022, in Uvalde, Texas.

Jacinto Cazares, the father of Jacklyn Cazares, told ABC News that his daughter "had the biggest heart."

"My little girl was full of life and touched so many people. She had the biggest heart," he said.

"Jackie was the one that would go out of her way to help anyone. It gives me some comfort, that she would be the little cracker that would have done something to help her classmates in that very scary scenario."

Her uncle, David Hernandez, told ABC News that Jacklyn was "always the life of the party."

"She knew how to make people laugh no matter how bad you were feeling," he said. "She told her mom that she was going to be famous one day and go to Paris, France, to see the Eiffel Tower. But just in case it didn't happen, she had a backup plan, so she started a piggy bank and put loose change that she found around the house because she was going to get to Paris one day."

Hernandez said that he misses Jacklyn and her cousin, Annabel Rodriguez, "so much that some days I don't want to get out of bed." 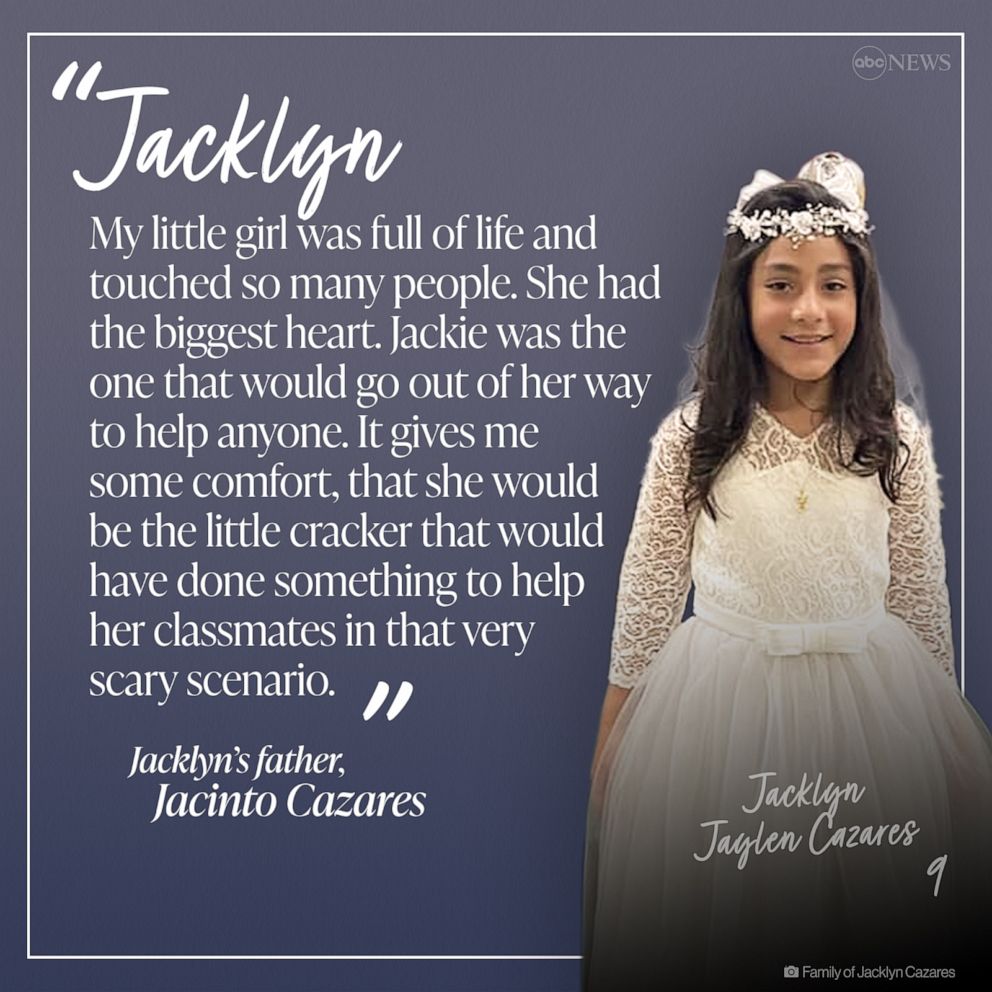 ABC News Photo Illustration, Family of Jacklyn Cazares
Jacinto Cazares on his daughter, Jacklyn Cazares, who was among those killed in the shooting at Robb Elementary School, May 24, 2022, in Uvalde, Texas.

Xavier James Lopez, 10, was known as the "life of the party" by his family. On May 23, on the night before the shooting, Xavier's grandmother, Amelia Sandoval, said that she stopped by his home for supper. When it was time to say goodbye, "[Xavier] hugged me from behind and said 'I love you G mom,'" Sandoval told ABC News. "I said 'I love you, see you tomorrow.'"

"I love him. I loved him. And I will continue to love him for the rest of my life. I can't wait till the day that we meet up again," she said.

Shortly after the shooting, Sandoval told ABC News about her grandson, who loved dancing. "He liked baseball, he liked soccer... When his parents had barbecues, he was always the life of the party. He always liked dancing. He always loved doing things with his mom. Doing face masks. Doing TikToks."

"We loved him very much and he will be greatly missed." 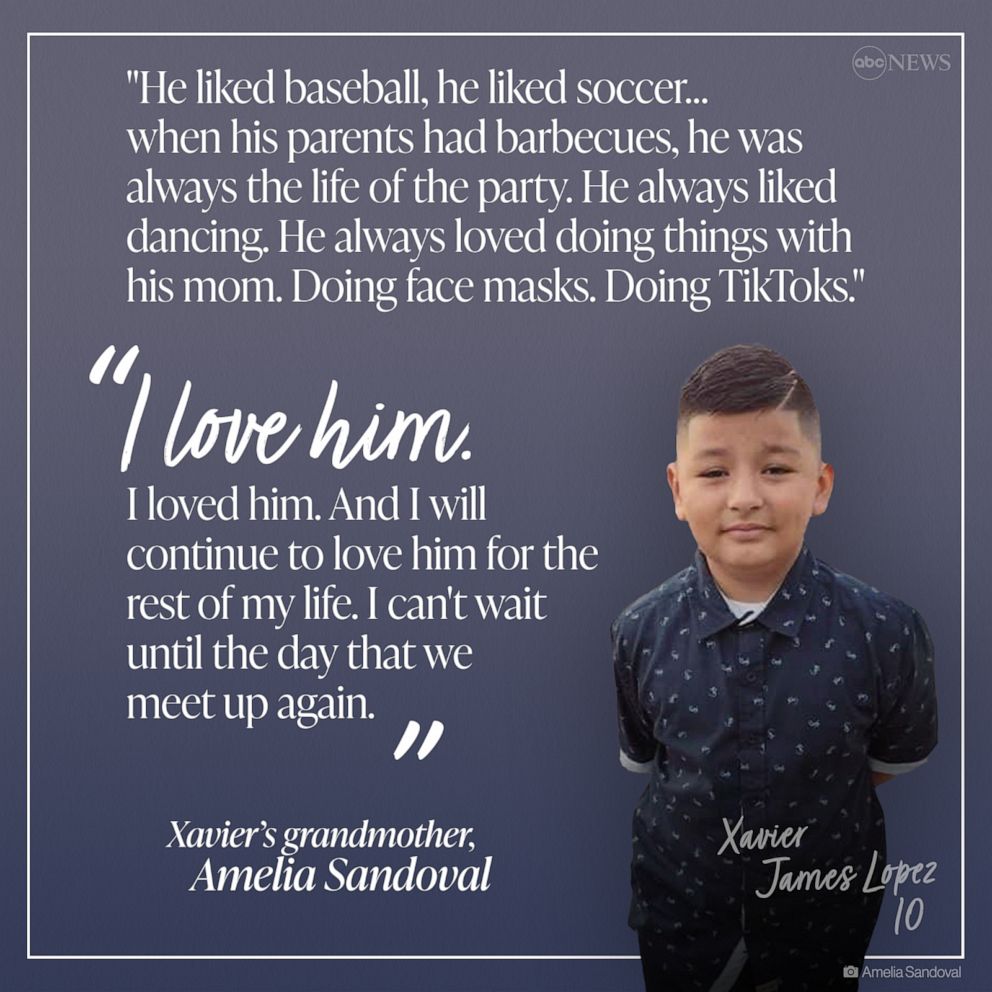 ABC News Photo Illustration, Amelia Sandoval
Amelia Sandoval on her grandson, Xavier James Lopez, who was among those killed in the shooting at Robb Elementary School, May 24, 2022, in Uvalde, Texas.

During a White House press conference on June 7, actor Matthew McConaughey spoke of how the small shoes were the "only clear evidence that could identify her."

Rodriguez wrote that her daughter's favorite meal was a #13 from Whataburger with a side of sliced jalapeños, and her favorite drink from Starbucks was a Mango Dragonfruit Refresher.

"She was sweet, charismatic, loving, caring, loyal, free, ambitious, funny, silly, goal-driven and best of all, my very best friend," Rodriguez wrote. "She loved to call me 'mama.'"

"Her dream to become a marine biologist started in kindergarten and she had her heart set on Texas A&M University in Corpus Christi. She loved animals and babies so much." 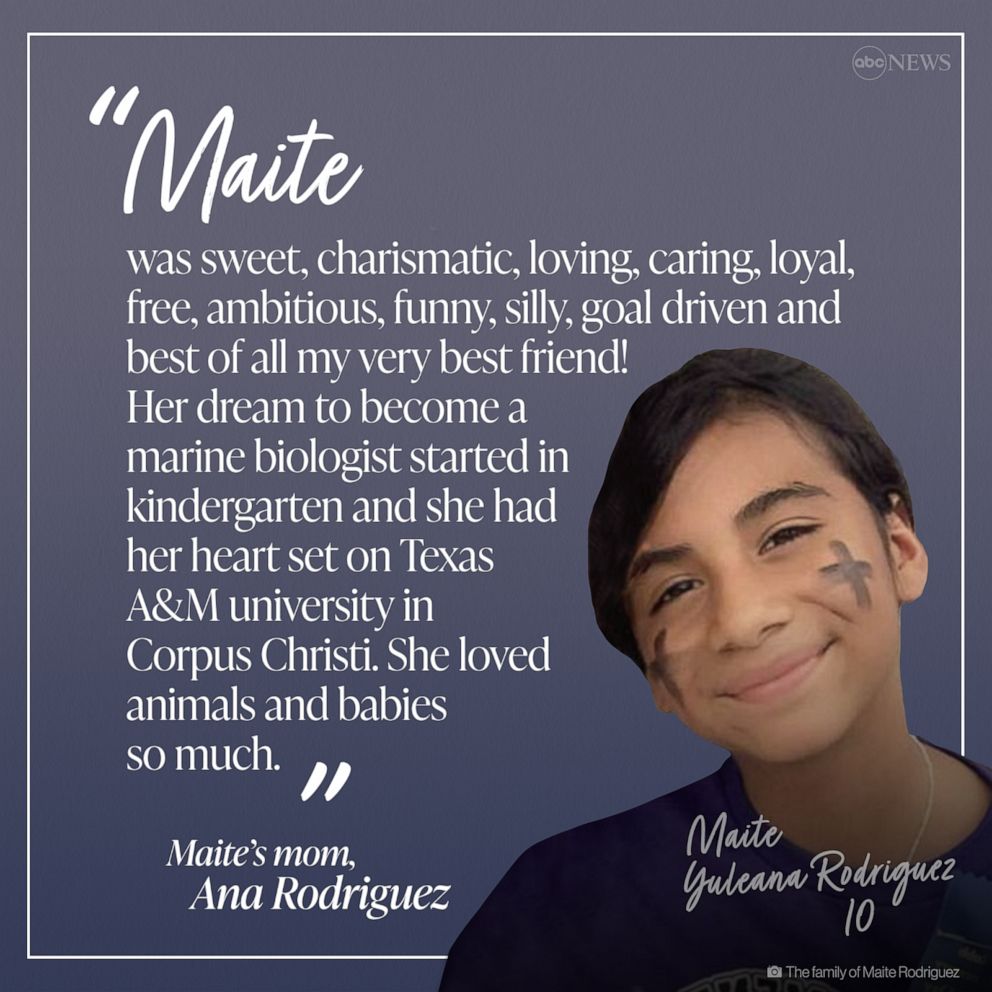 ABC News Photo Illustration, Family of Maite Rodriguez
Ana Rodriguez on her daughter, Maite Yuleana Rodriguez, who was among those killed in the shooting at Robb Elementary School, May 24, 2022, in Uvalde, Texas.

Fourth-grader Makenna Lee Elrod was "a light to all who knew her," her aunt, Allison McCullough, told ABC News. "She loved her family and friends so much."

"Makenna was 10 years old and loved to play softball, gymnastics, loved to dance and sing, play with Fidgets and spend time with her family," including her brothers, sisters and cousins, McCullough said.

Her aunt told ABC News that she loved animals and made friends everywhere she went. "Makenna was a natural leader and loved school," she said.

"Makenna loved going to the ranch with her dad to feed animals and ride on the ranger. She was full of life and will live on in the hearts of all who knew and loved her."

"Her smile would light up a room. Makenna loved to write notes to her family and leave them in hidden places to be found later."

The teachers who shielded Makenna were McCullough's best friends, McCullough said. She and Makenna's mom are twins and both teachers for the district.

"Makenna was so beautiful. We are devastated." 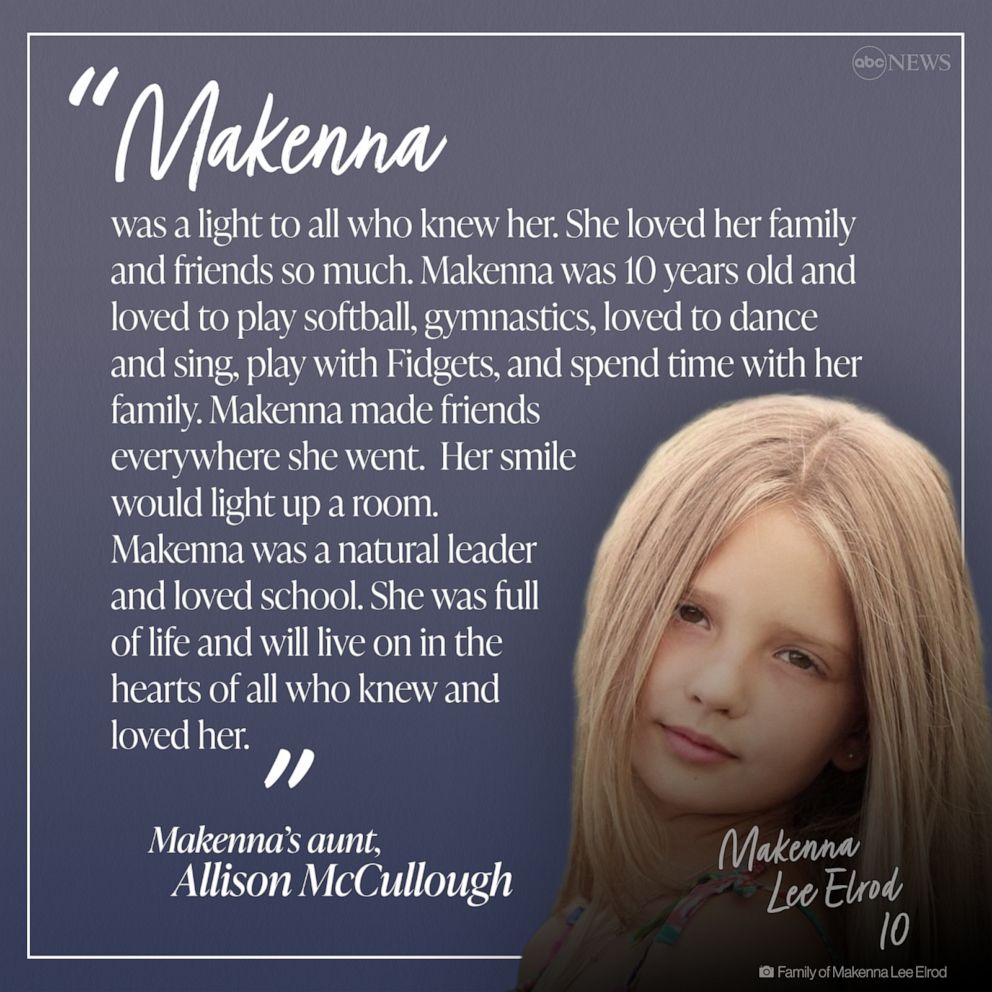 ABC News Photo Illustration, Family of Makenna Lee Elrod
Allison McCullough on her niece, Makenna Lee Elrod, who was among those killed in the shooting at Robb Elementary School, May 24, 2022, in Uvalde, Texas.

Salazar said he had three field days with his daughter, and she won all her races and earned six first-place ribbons. Running was where "she really excelled," he said.

"I think she was just really looking forward to track meets and being able to race."

He told ABC News that when he first held his daughter as an infant, he "couldn't believe that I had a daughter... I had two sons and I felt like, OK, you know, I think we're complete now as a family."

Speaking on all the children who were killed in the shooting, Salazar said, "These children could have been the next president." 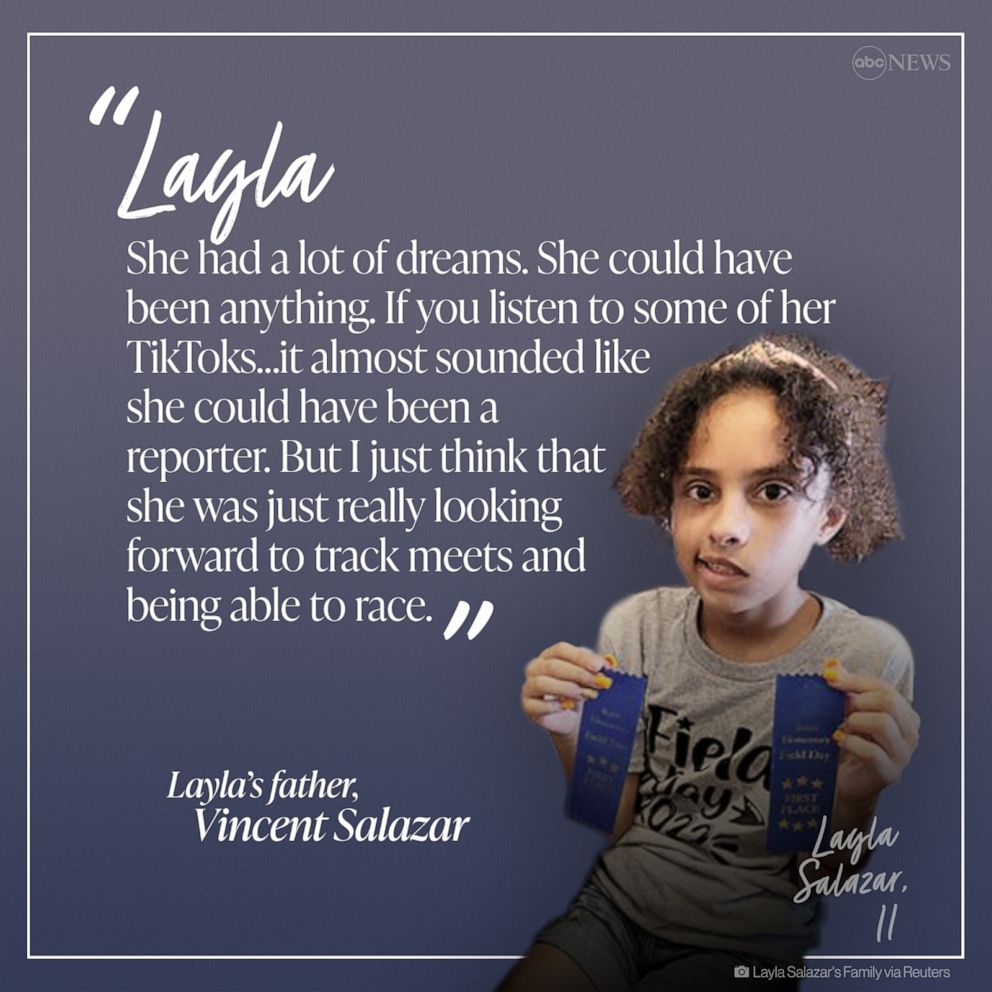 ABC News Photo Illustration, Layla Salazar's Family via Reuters
Vincent Salazar on his daughter, Layla Salazar, who was among those killed in the shooting at Robb Elementary School, May 24, 2022, in Uvalde, Texas.

Eva Mireles, 44, was a fourth-grade teacher at Robb Elementary School. Her daughter, Addy Ruiz, told ABC News that her mom was adventurous, brave and strong.

"My mom had the most beautiful smile. It was contagious," she said. When asked how she wants her mother to be remembered, Ruiz said, "She was a hiker, a CrossFitter, a teacher, a hero. She loved karaoke and her dog Kane. She was the glue to our family," she said.

"Our lives will never be the same but I'm glad that we got to have her for the short time we did. I will forever be proud to be her daughter. I want the world to never forget her name: Eva Mireles. Robb Elementary fourth-grade teacher who selflessly jumped in front of her students to save their lives." 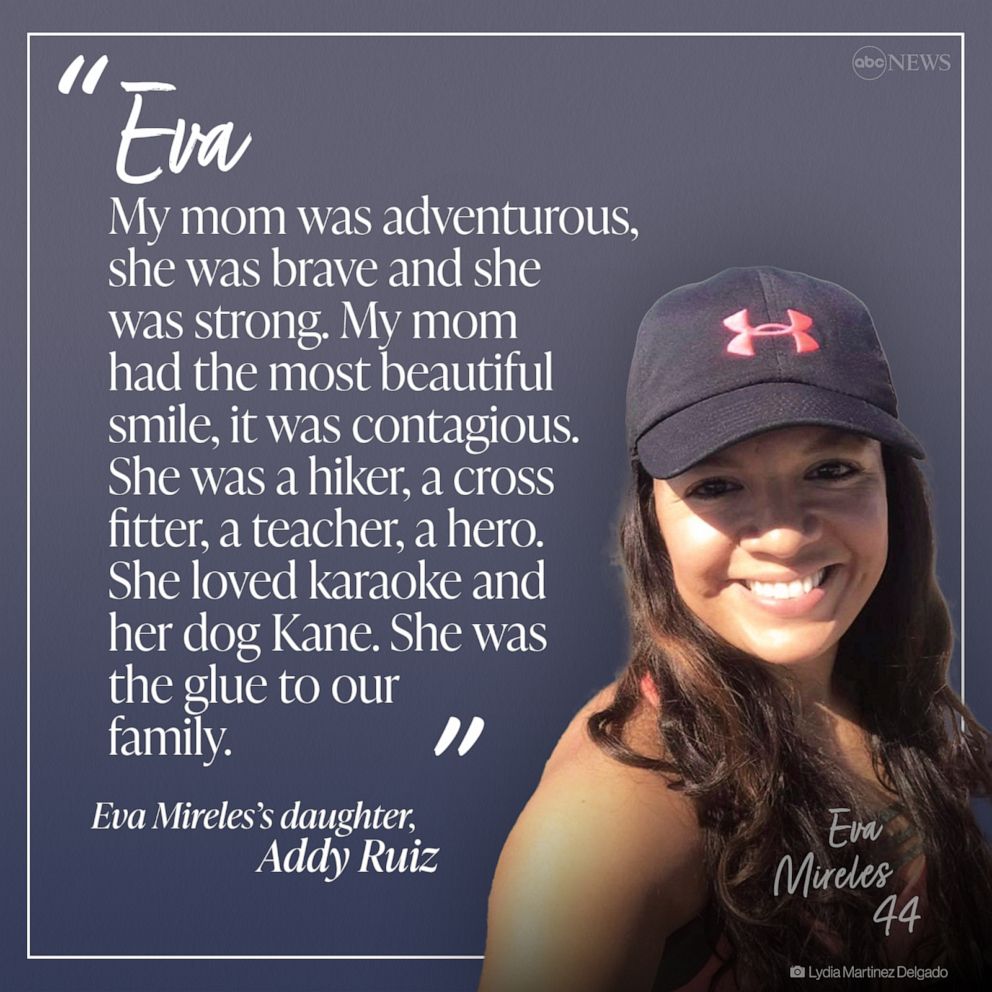 "Oh my God, she was a very talented little girl. She loved to draw. She was real sweet. Never getting into trouble," she said. She said her granddaughter was drawing artwork to try to submit to win the Doodle for Google artwork competition.

The last time she saw her granddaughter was on Mother's Day. "They showered me with gifts," she said. 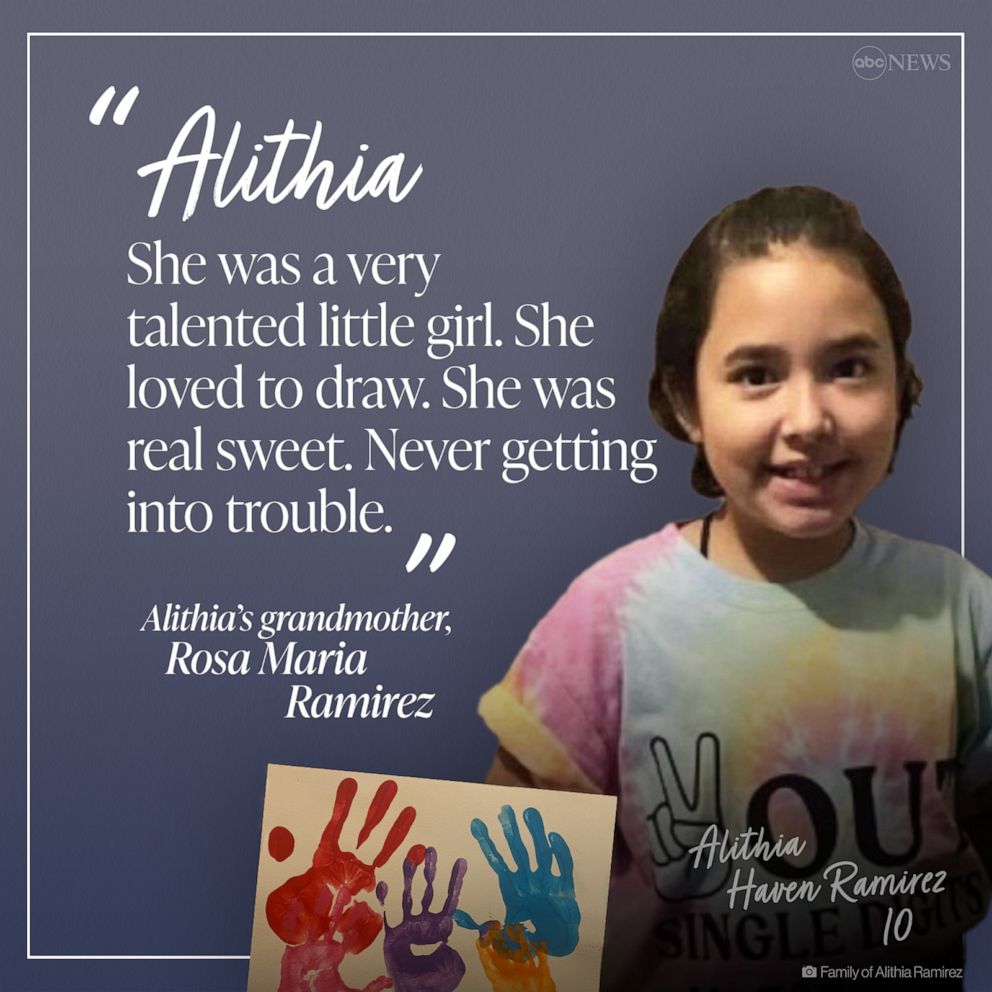 ABC News Photo Illustration, Family of Alithia Ramirez
Rosa Maria Ramirez on her daughter, Alithia Ramirez, who was among those killed in the shooting at Robb Elementary School, May 24, 2022, in Uvalde, Texas.

Tess Mata, 10, was described by her family as a bubbly little girl. She loved to dance and had dreams of one day being TikTok famous.

"She deserves to be remembered," Tess' mother, Veronica Mata, told ABC News. "She put a smile on everybody's face every time she was always dancing. She always had the biggest smile ever. So I want her to be remembered, for the awesome little girl that she was." 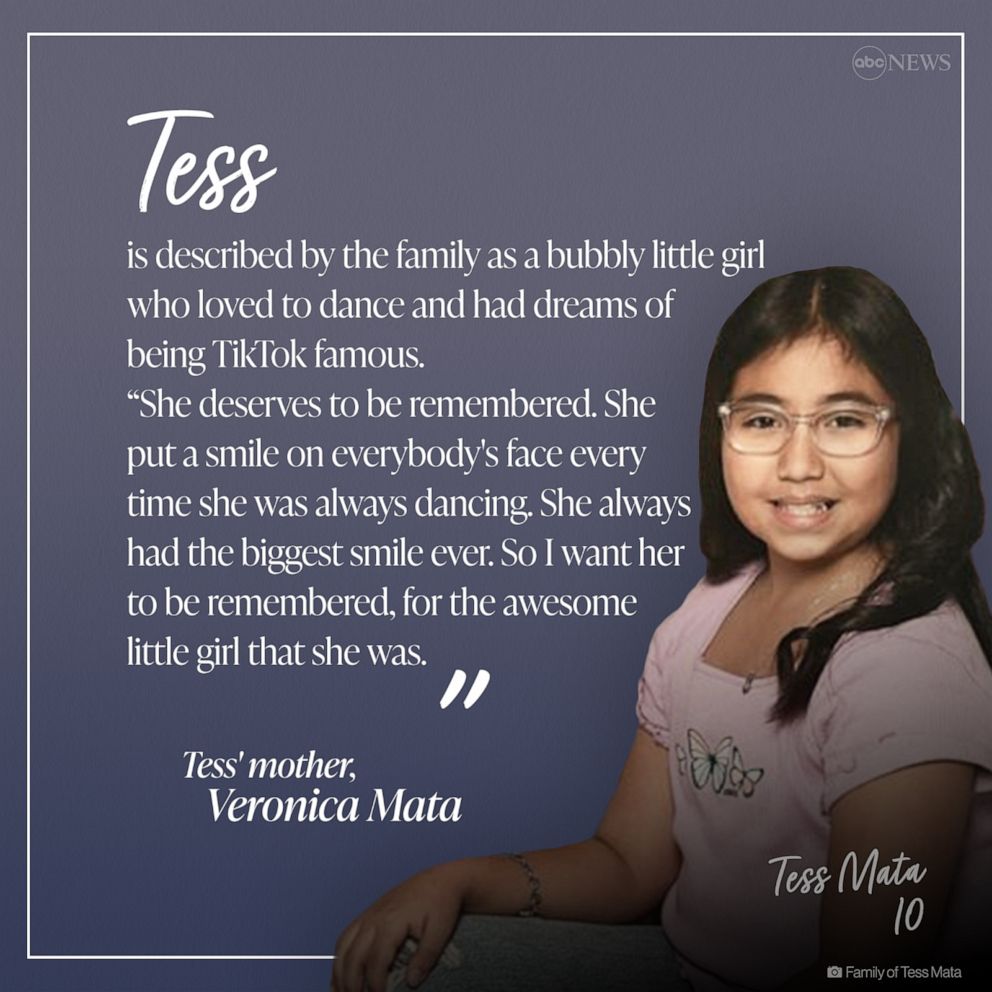 ABC News Photo Illustration, Family of Tess Mata
Veronica Mata on her daughter, Tess Mata, who was among those killed in the shooting at Robb Elementary School, May 24, 2022, in Uvalde, Texas.

Rojelio Torres, 10, was described as a happy boy by his mom and aunt, who loved to be helpful.

"He was happy. He was helpful," Rojelio's mother, Evadulia Orta, told ABC News.

"He played with his brothers. He was loving, caring. He liked to help a lot of people. At school he was a good student," she said.

She said that a teacher once described to her how Rojelio would always offer to help clean up after class.

"I'm going to miss him because he was my life," she said. 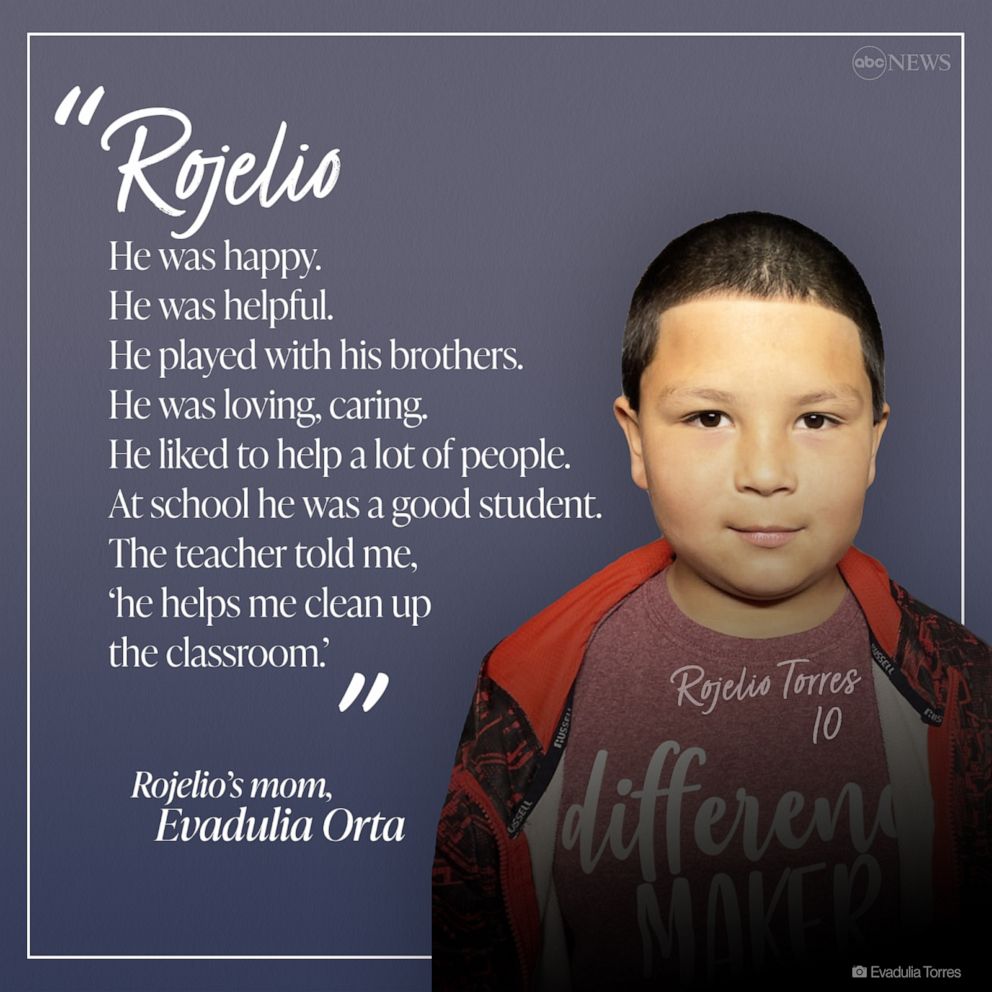 ABC News Photo Illustration, Evadulia Orta
Evadulia Orta on her son, Rojelio Orta, who was among those killed in the shooting at Robb Elementary School, May 24, 2022, in Uvalde, Texas.
Editor's Picks