Rep. Ayanna Pressley, D-Mass., revealed in an interview Thursday that she has been living with symptoms of alopecia, an autoimmune disease that causes hair loss.

In an interview with The Root, the freshman lawmaker said her desire to be honest with her supporters at home and abroad, many of whom identified with her signature Senegalese twist hairstyle, spurred the decision to disclose her condition.

"I think it's important that I'm transparent about this new normal," she said.

As a Black woman, the personal is political. My hair story is no exception. Sharing a very personal story today to create space for others: https://t.co/1sh11Q1Qp2

Alopecia causes a body's immune system -- which is supposed to fight external pathogens -- to attack its own hair follicles, resulting in hair loss, according to the National Institutes of Health. It is neither painful nor contagious, and in some cases, hair may even grow back.

There is no cure for alopecia, though, and its cause is uncertain. Experts believe an undefined combination of environmental and genetic factors can trigger the disease.

Pressley said that she first discovered signs of the condition in the fall last year, when she noticed small patches of missing hair during a hair appointment.

She soon started finding "sinkfuls of hair" and tried to stymie the progression of the disease with a variety of techniques.

"Every night I was employing all the tools that I had been schooled and trained in throughout my life as a black woman because I thought that I could stop this," she said, adding that she didn't want to sleep because she feared waking up to more lost hair and facing down "a person who increasingly felt like a stranger" to her in the mirror.

Pressley said that she came to the decision in December to eventually disclose her condition while hiding in a restroom stall in the U.S. Capitol -- right after voting to impeach President Donald Trump.

She had worn a wig that day, but said, "I couldn't recall the last time I'd ever felt more naked." 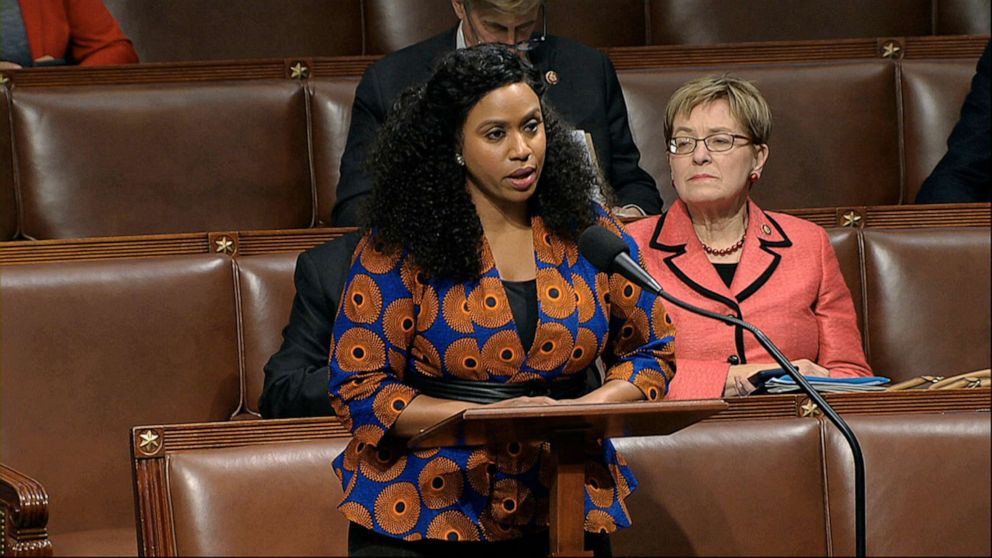 House Television via AP, FILE
Rep. Ayanna Pressley speaks as the House of Representatives debates the articles of impeachment against President Donald Trump at the Capitol in Washington, Dec. 18, 2019.

Despite well-meaning efforts to comfort her -- some have tried reminding her of the India Arie song "I Am Not My Hair" -- Pressley said her hair was a "synonymous and conflated part" of her personal and political identities, and that at the end of the day, "I still want it."