Congress welcomed a record number of women in 2018 -- 102 in the House and 25 in the Senate, with the 116th class becoming the most diverse group of lawmakers in U.S. history. But the new high could only be attributed to successes in the Democratic Party, including a number of historic firsts for Democratic women of color.

For Republican women, the outcome was dismal. The GOP entered 2019 with eight female senators -- an improvement, but far short of the 17 on the Democratic side. And in the House, out of 197 Republicans, a mere 13 were women, compared to 23 during the last cycle. 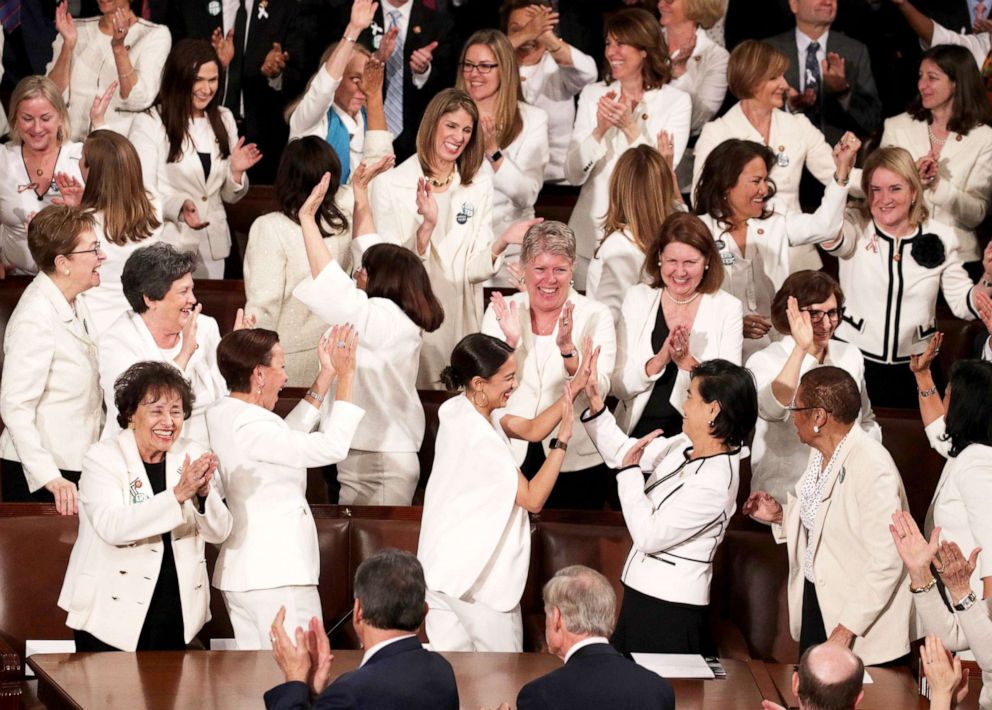 Alex Wong/Getty Images
Female lawmakers cheer during President Trump's State of the Union address in the chamber of the U.S. House of Representatives in the Capitol, Feb. 5, 2019.

But will record runs translate to record victories in November that could bolster gender and racial representation in Congress? Experts say that structural barriers remain, starting at the primary level, which hurt female candidates' chances in both parties.

An uphill climb for women, but bleaker for Republicans 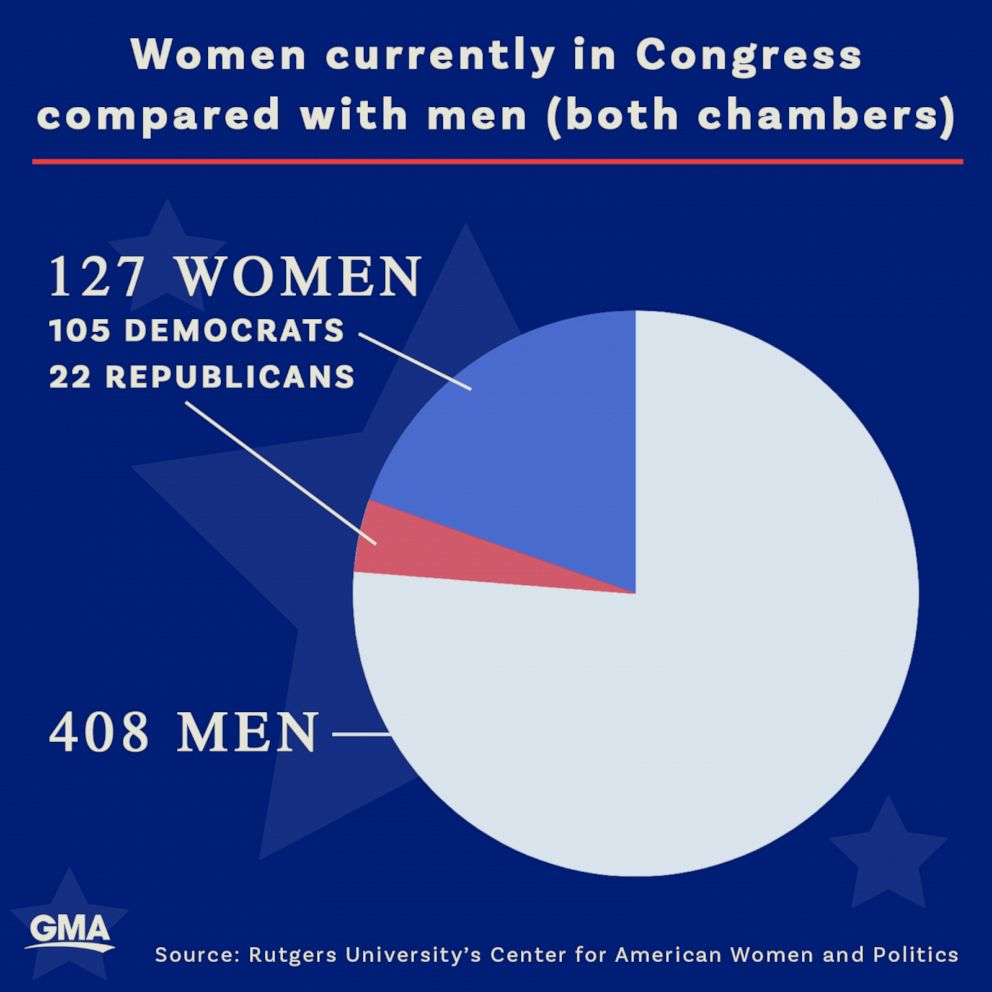 There are currently 127 women serving in Congress -- 105 are Democrats and only 22 are Republicans. Among them, there are 47 Democratic women of color, but only one woman of color in Congress is a Republican.

Following the GOP's failures in 2018, Rep. Elise Stefanik, who made history in 2015 as the youngest Republican woman ever elected to Congress, led a group of representatives in writing a letter to Republican leadership urging them to conduct a "transparent" autopsy to assess "the structural operations" that led to these "disappointing results." A GOP autopsy was also conducted in 2012 in response to similar concerns.

"We fell short across multiple demographics, including women, who represent a growing segment of America's voting population," the letter said. "Minimizing or ignoring the root causes behind these historic losses will lead us to repeat them." 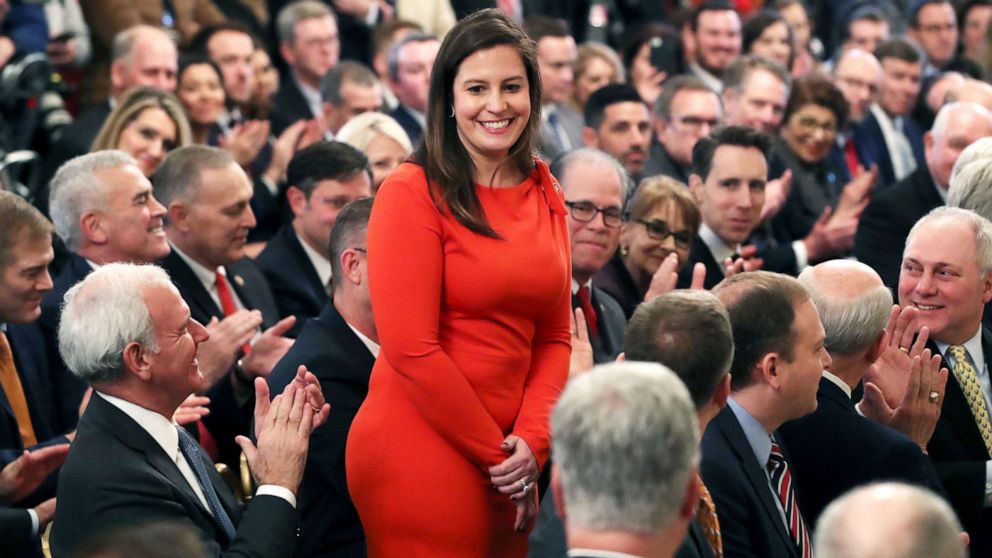 Kelly Dittmar, director of research at CAWP, said that as the Republican Party faces a representation problem in Congress, the GOP is also dealing with a "gender gap in partisanship" and a "lack of racial and ethnic diversity" in party membership, which "certainly translates into candidacy." 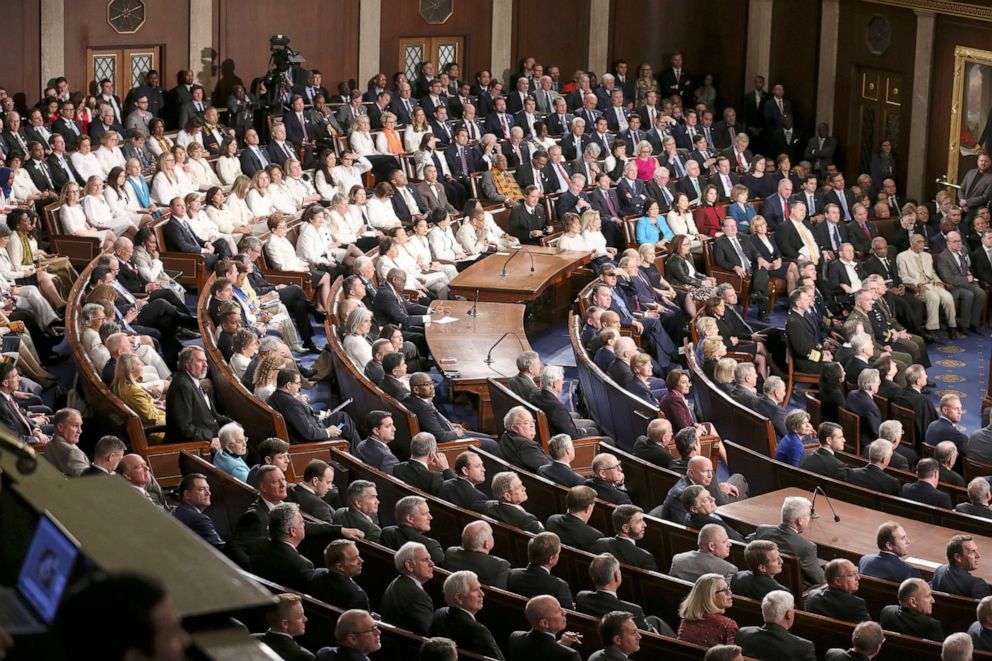 Sipa USA via AP, FILE
Democrats and Republicans lawmakers listen during President Trump's State of the Union address to a joint session of Congress in the chamber of the U.S. House of Representatives in Washington, Feb. 5, 2019.
Editor's Picks

According to a June 2020 Pew Research report, 56% of female registered voters identify with or lean toward the Democratic Party, compared with 42% of men.

The report also finds that the GOP "continues to maintain an advantage in leaned party identification among white voters," 53% to 42%, while "sizable majorities of Black, Hispanic and Asian American voters identify with or lean toward the Democratic Party."

If you don't believe in systemic racism or systemic sexism, then you're not going to solve the problem.

Leah Wright Rigueur, a professor of public policy at the Harvard Kennedy School, said that bolstering the campaigns of women and women of color as early as possible is crucial because sexism and racism have historically shut them out of the political system, where they are often overwhelmingly outraised and outspent by white men who have access to networks of wealth and power. 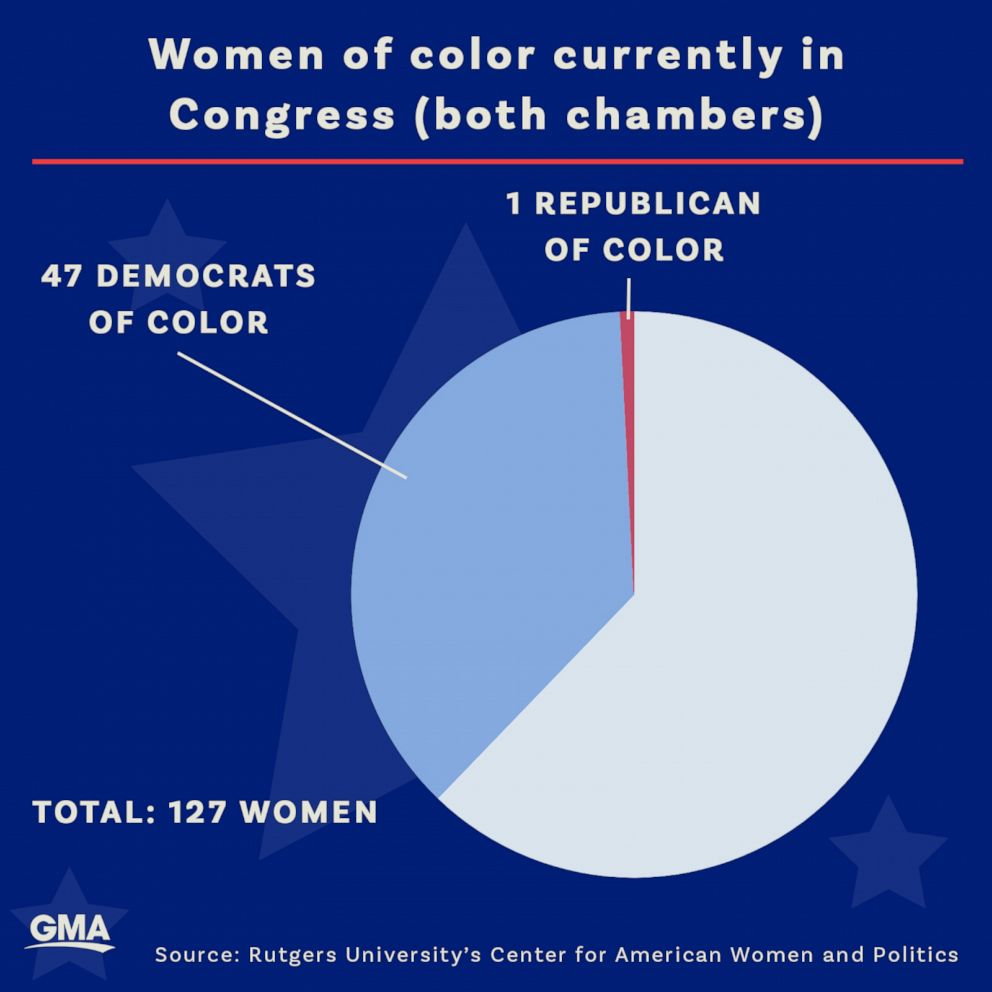 And although the factors behind the partisan gap in representation are complex, she said that the big picture boils down to a deficit in support -- particularly at the primary level. 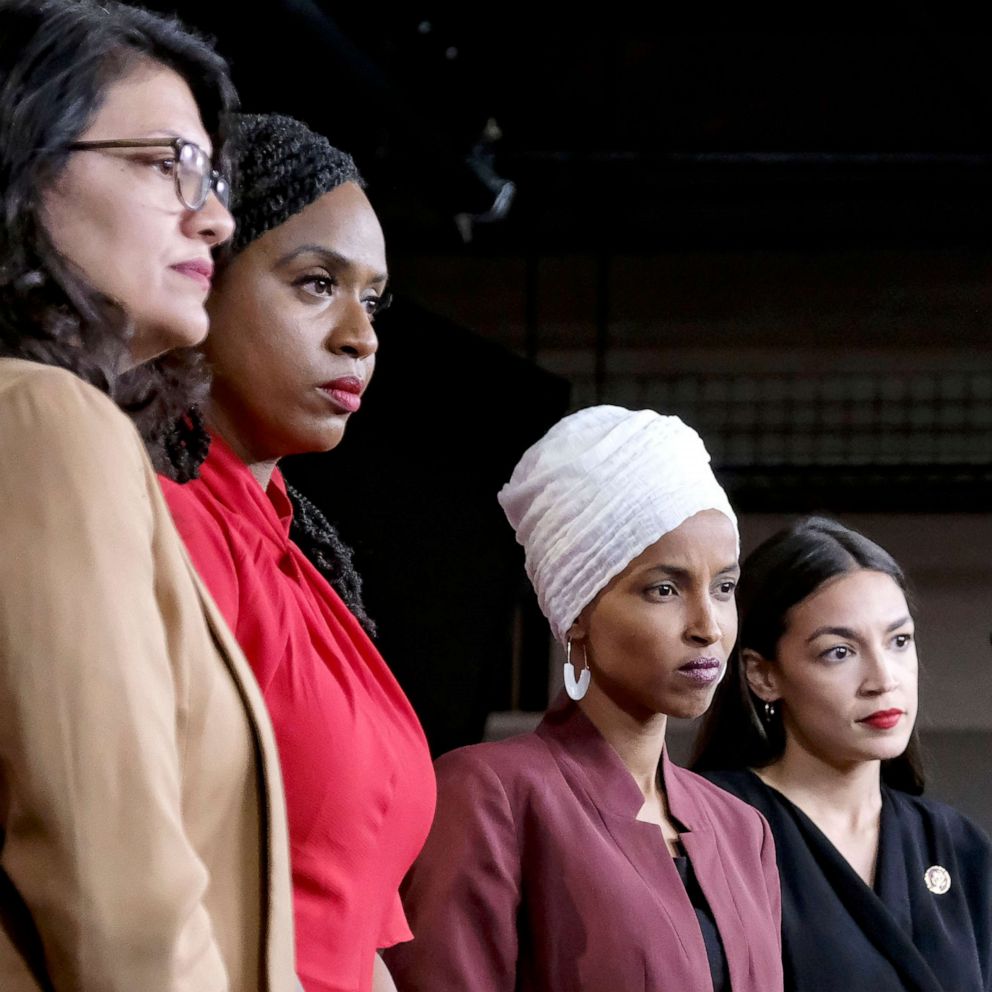 According to Julie Conway, who runs ViewPac --- one of a small number of Republican groups working to support female Republican candidates -- an underlying factor to the deficit in support for women and women of color is that "Republicans historically have really shied away from gender politics and identity politics."

And the problem with the theory of supporting the "best candidate," regardless of gender or race, Conway said, is that it ignores the fact that "the apparatus really tilts towards Republican men."

You have to recognize the actual institutional biases that prevent (women and women of color) from succeeding.

According to Rigueur, the lack of acknowledgment of sexism and structural racism contributes to why "the Republican Party is where the Democratic Party was in the 1970s when it comes to representation."

"The problem is that you have to recognize the actual institutional biases, biases that prevent these people from succeeding, if you want them to succeed," Rigueur said.

"If you don't believe in systemic racism or systemic sexism, then you're not going to solve the problem, right? It's not just going to magically go away, it's actually going to get worse," she said. "So step one is actually recognizing that there's a problem. Step two is recognizing the origins of those problems -- and the Republican Party is still on step one."

Democratic Rep. Veronica Escobar, who made history in 2018, along with Rep. Sylvia Garcia, by becoming the first Latinas to represent Texas in Congress, said that "part of what has prevented lots of women from running for Congress is that it is so incredibly expensive."

"What I found was, thankfully, there are [Democratic] groups that have been established to help women like me, that were instrumental in my success -- groups like Emily's List, groups like Poder Pac ... a group founded by Latinas, for Latinas, to help get them elected to Congress," Escobar told "Good Morning America." "I also had the benefit of support from Latino Victory [Fund], and other organizations that really stepped in to really help uplift my run and help me raise money. Without them, it would have been a significantly more challenging race." 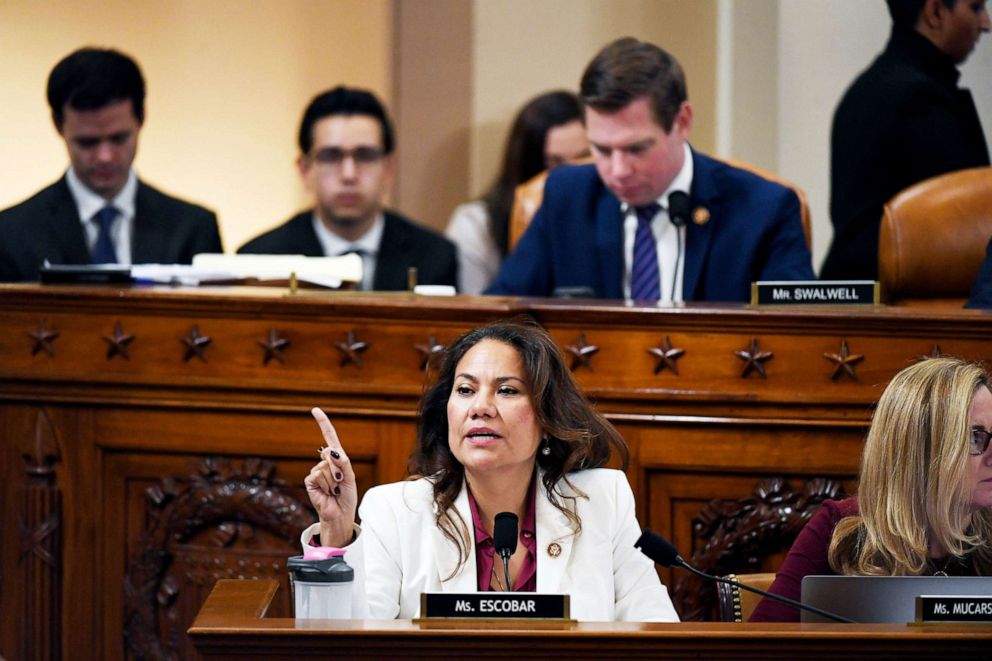 Conway said that over the past couple of years there has been a "slow change" and a small increase in early support for female GOP candidates, but groups like ViewPac and Elevate PAC remain few and far between.

"No one comes close to what we do," Conway said. Although ViewPac supported 27 Republican non-incumbent women this cycle in seats considered "competitive enough" to endorse, she said the resources GOP groups provide can't compare to the highly developed organizations and networks of support for Democratic women.

"You're not going to win an election with a $5,000 check from ViewPac," Conway said. "The Democrats have had generations of advantage here because they have always encouraged Democratic women to run, and [groups like] Emily's List have done a phenomenal job of supporting women as early as possible and encouraging them and training and giving them the resources to be successful. There will never be an Emily's List on the Republican side."

Emily's List, one of the largest national groups that supports Democratic women who support abortion rights, was founded in 1985 at a time when there was a total of 25 women in Congress: 12 Democrats and 11 Republicans in the House, 2 Republicans in the Senate and no female Democratic senators.

The group's name, "Emily," stands for "early money is like yeast." 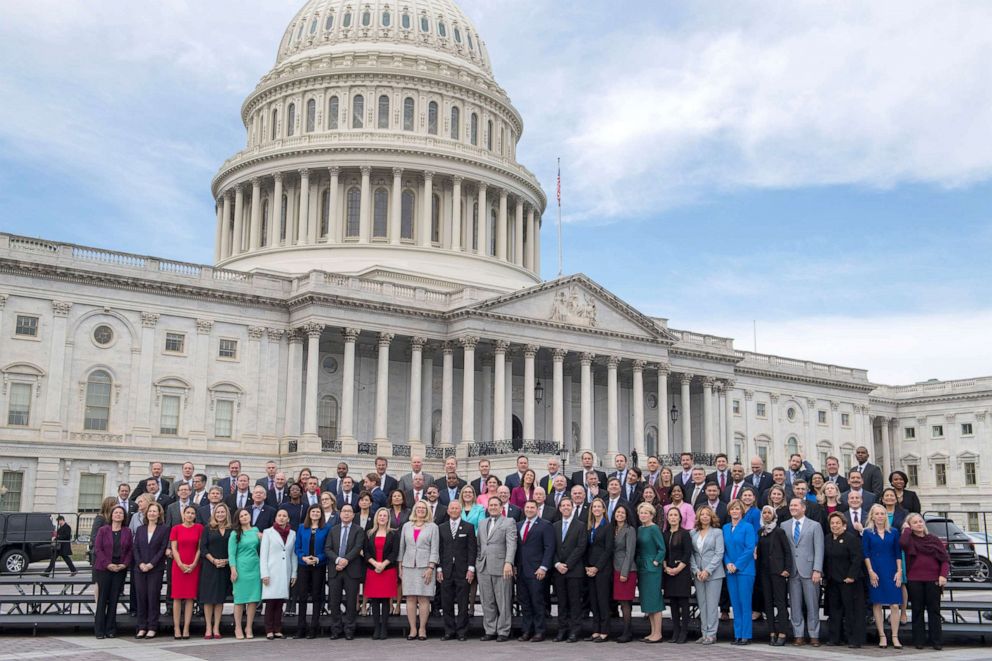 CQ-Roll Call Inc via Getty Images, FILE
Members-elect from the 116th Congress pose for the freshman class photo on the East Front of the Capitol on Nov. 14, 2018.

"It took this very intentional work of Emily's List, and I credit our founder Ellen Malcolm, who came up with this idea that we needed to build enough organizations and resources around women candidates, in this case, Democratic women candidates, so the Democratic Party would take them seriously and invest in them," Stephanie Schriock, the president of Emily's List, told "GMA."

"After three decades, we got to a place where we were working hand-in-hand with the party on a lot of recruitment and it was still a little bit of a challenge, but we were already much further ahead than our Republican counterparts because there were no real organizations solely focused on the election of Republican women every single year," Schriock added.

According to a CAWP analysis, there are a record 298 female nominees for U.S. House in 2020, including 115 women of color -- 82 Democrats and 33 Republicans, which are new highs for each party. 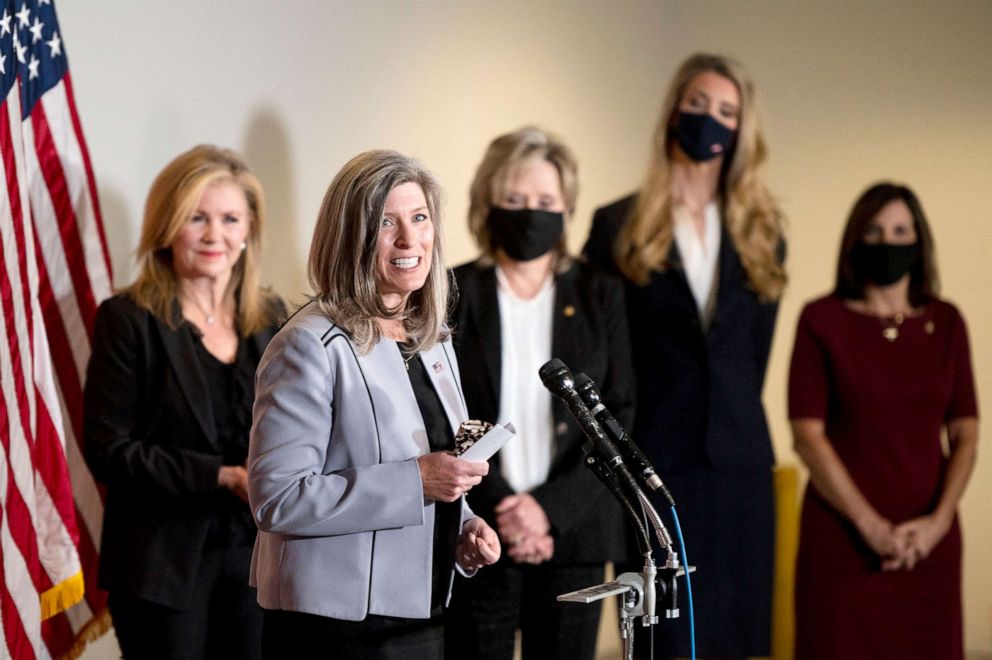 Rigueur said that although it is important to "celebrate the wins," we should recognize that this is "a fragile celebratory moment."

It's going to be an exceptionally long time before we achieve any sort of parity as women.

"We celebrate great progress when it comes to race and gender, but we also have to recognize that the progress that we see is fractional, it's incremental, it's gradual, and that it doesn't necessarily reflect transformative change," Wright told "Good Morning America." "So again, record numbers, that's fantastic. But do those record numbers actually translate into record wins?"

According to a Sept. 18 analysis by The Cook Political Report, cited by CAWP, women are competing in about 32 races that are considered toss-ups. 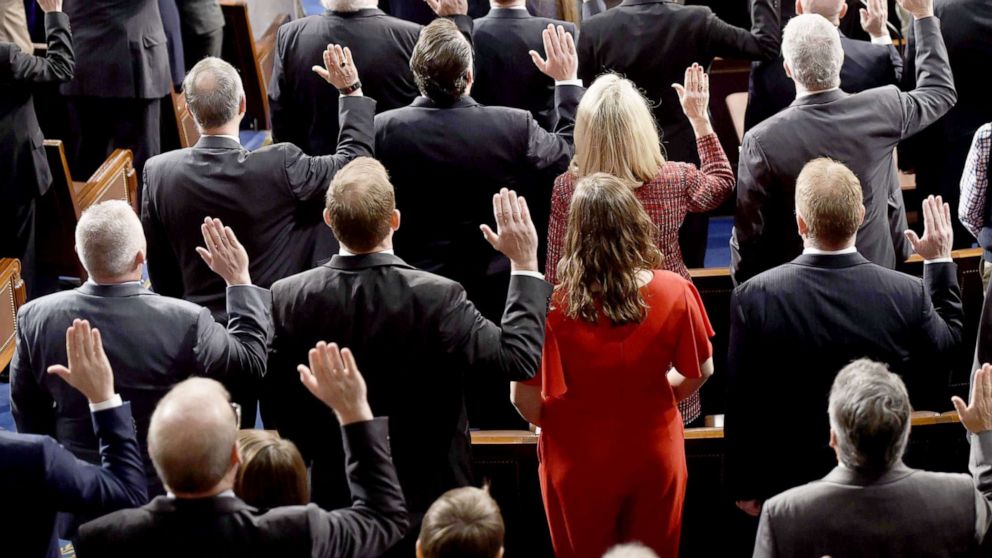 Saul Loeb/AFP via Getty Images, FILE
Members of Congress take the oath during the opening session of the 116th Congress at the Capitol, Jan. 3, 2019.

"It's going to be an exceptionally long time before we achieve any sort of parity as women," Conway said, adding that "we could have a million Republican women running but if they're not running in seats that are competitive, again, it doesn't matter."

Among the 20 women who are nominees for U.S. Senate, there are 12 Democrats and eight Republicans. Only two are women of color -- both Democrats competing in solidly GOP districts. To date, only five women of color have ever served in the Senate. They were all Democrats.

"I think when it comes to women of color in the Republican Party, if it was a real priority of the party, you would recruit and back women of color in particularly competitive and winnable districts, and we haven't seen that," Dittmar said.