The actual number of infections from COVID-19 in Los Angeles County may be as high as 55 times the current number of confirmed positive cases, according to preliminary results from antibody tests conducted as part of a joint venture between the University of Southern California and the Los Angeles County Department of Public Health.

After testing nearly 900 people, researchers estimate that as many as 442,000 people throughout the county of nearly eight million adults had the virus as of April 9. That's just 5.6% of the population.

"So we have a long way to go," lead investigator Neeraj Sood, a USC professor of public policy, told ABC News on Monday. "We're still early in the epidemic and more people will likely get infected. "

The results were from the venture's first round of testing. The study by USC researchers and the public health department is ongoing and will test thousands more in the coming weeks. 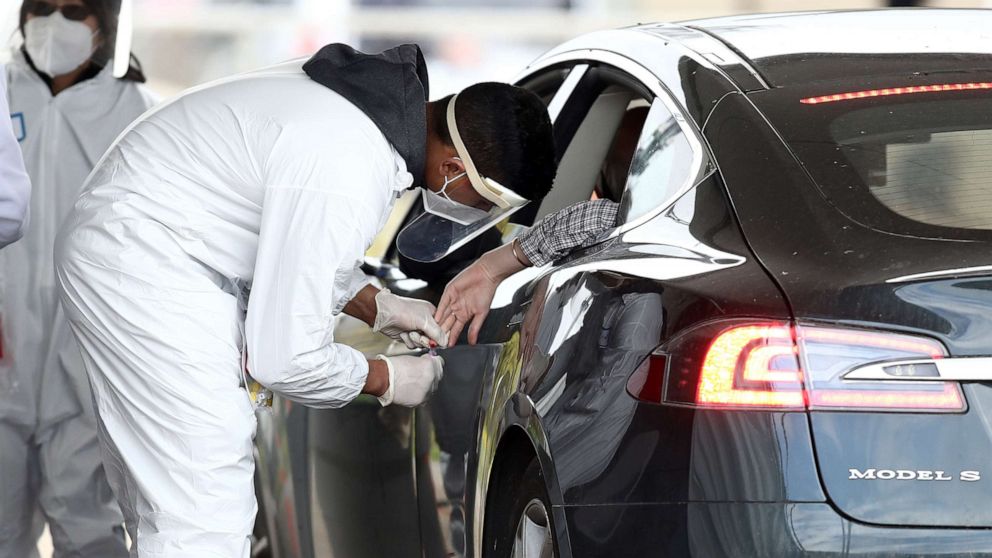 Ezra Shaw/Getty Images, FILE
A medical professional administers a coronavirus (covid-19) test at a drive thru testing location conducted by staffers from University of California, San Francisco Medical Center (UCSF) in the parking lot of the Bolinas Fire Department, April 20, 2020 in Bolinas, Calif.

Sood cautioned that while the antibody testing had likely uncovered hidden cases of the coronavirus, "these tests are not good for telling if someone has immunity."

Questions remain about whether antibodies for COVID-19 in people who've survived the illness provide immunity.

There were 7,994 confirmed cases of COVID-19 reported to the county by the time of the study in early April.

MORE: On a Florida island for the wealthy, everyone gets a coronavirus antibody test

"These results indicate that many persons may have been unknowingly infected and at risk of transmitting the virus to others," Dr. Barbara Ferrer, director of the L.A. County Department of Public Health, said in the news release.

Ferrer said the findings underscored "the importance of expanded polymerase chain reaction (PCR) testing to diagnose those with infection so they can be isolated and quarantined, while also maintaining the broad social distancing interventions."

She added that the data suggests the county's mortality rate is around 0.1% or 0.2% of true infections, but added that this was no consolation to the friends and families of the people who have died. The number of deaths related to COVID-19 in the county has surpassed 600.

MORE: On a Florida island for the wealthy, everyone gets a coronavirus antibody test

Researchers said that they asked the test subjects whether they had experienced COVID-19 symptoms in the last few months and many said they had. However, it's unclear how much of their symptoms were actually due to other viruses, such as the flu, that cause similar symptoms.

The USC study also cautioned that its test results had not yet been peer reviewed by other scientists.

The test subjects were found through a market research company and researchers used a rapid antibody blood test for the study.