As the debate surrounding gun reform legislation continues to whirl around Congress, activist groups are taking matters into their own hands, lobbying the American people directly.

Sandy Hook Promise, a gun safety advocacy group created after the shooting at Sandy Hook Elementary School in Newtown, Connecticut, in 2012, released an advertisement on Tuesday designed to tell viewers that the back-to-school season brings with it the threat of another mass shooting.

Survive the school year with these must-have #BackToSchool essentials. https://t.co/9KgxAQ0KGz
This PSA contains graphic content related to school shootings & may be upsetting to some viewers. If you feel this subject matter may be difficult for you, you may choose not to watch. pic.twitter.com/5ijYMtXRTy

Nicole Hockley, the founder of Sandy Hook Promise, told ABC News Senior Washington Reporter Devin Dwyer, "we're releasing this PSA in the back-to-school time because I think a lot of parents don't really understand what that school experience is like ... school shootings continue to increase."

"We're releasing this PSA in the back-to-school time because I think a lot of parents don't really understand what that school experience is like ... school shootings continue to increase," Sandy Hook Promise founder Nicole Hockley tells @devindwyer https://t.co/QNtQ04LMrN pic.twitter.com/ipgMivlrSs

Titled "Back-To-School Essentials," the video looks like an unassuming ad for school supplies and shows a young boy pulling a new backpack out of his locker.

But then as a young girl shows off a new binder to the camera, a teacher can be seen in the background rushing to close and lock the door. As another boy celebrates his new headphones that are, "perfect for studying," distant screams can be heard and students behind him begin to run out of the frame.

The darker undertones soon become overt when a boy is shown running down a hall, passing a fallen student. The sound of screams and gunshots echo from off-screen. 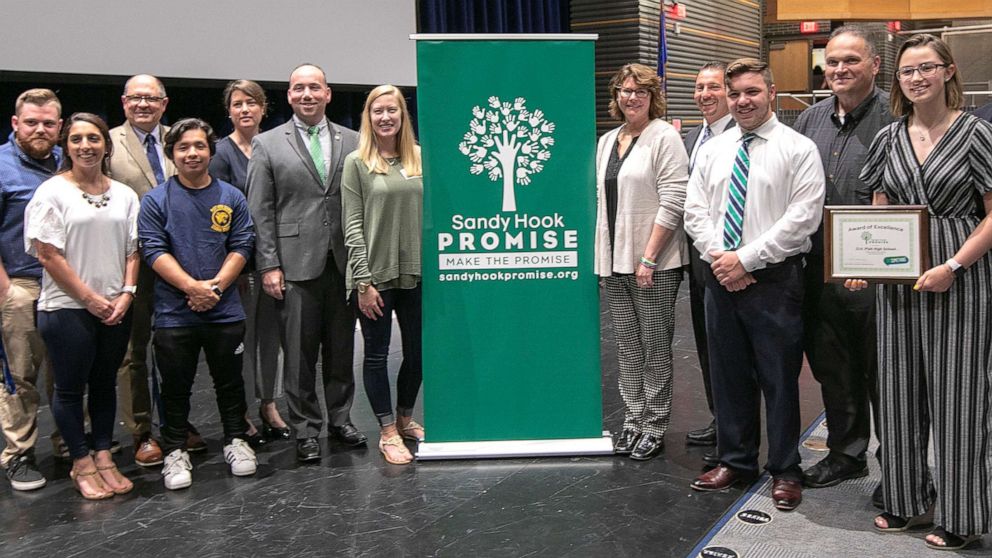 Dave Zajac/Record-Journal via AP
Sandy Hook Promise members, students and city and school officials pose for photos after an award presentation at Platt High School in Meriden, Conn., May 28, 2019.

"These new sneakers are just what I needed for the new year," the boy says to the camera.

Students are seen breaking windows to escape classrooms, tying socks around their legs to stop bleeding and clutching makeshift weapons beneath doorframes.

The ad concludes with a girl huddled in the bathroom, tears streaming down her face, as she sends a text message to her mother that reads: "I love you mom."

"I finally got my own phone to stay in touch with my mom," the girl explains.

(MORE: How one school is teaching students, including kindergarten, about active shooters)

As the bathroom door opens and heavy footfalls are heard slowly approaching, the screen fades to black.

"It's back to school time," the screen reads. "And you know what that means." 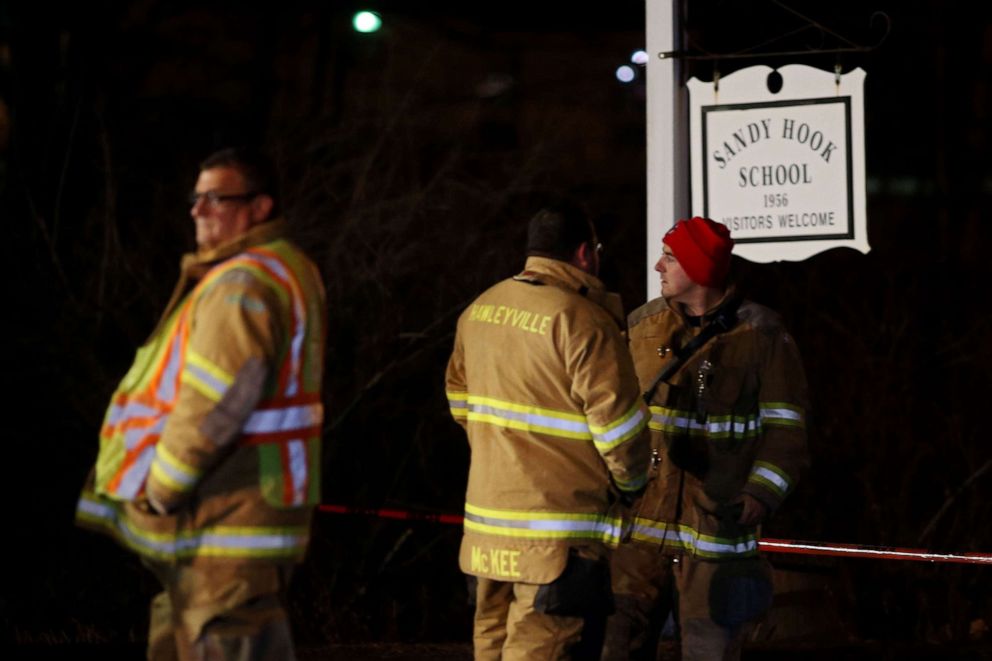 This ad comes just after a talk-a-thon by Senate Democrats on Tuesday evening, in which they protested inaction on gun violence.

The protest was organized by Sen. Chris Murphy, D-Conn., who served in the House for Connecticut during the mass shooting at Sandy Hook Elementary School. He has since made gun reform a central focus of his tenure.

Although the Democrat-led House has passed a version of gun reform legislation, Senate Majority Leader Mitch McConnell has repeatedly refused to put a gun reform bill on the floor unless it is first approved by the president.