At the start of the school year, it's not uncommon for school districts to be short bus drivers. Before the pandemic, Savannah-Chatham County Public School System in Georgia had been down 10% from what it needed, which is manageable, Paul Abbott, executive director for transportation for the district, told ABC News.

This year, he said the school district was down over 30% -- more than 110 drivers -- as it was gearing up for the return of students last week. As a result, the district has had to prioritize routes for around 20,000 students who are returning fully in person, leaving about 5,000 kids without the option of riding a school bus.

"We have the money, we have the buses, we have the parts. We have everything that we need except the critical resource -- bus drivers," Abbott said. "COVID just completely exacerbated the bus driver shortage."

The district is not alone. Schools across the country -- from Pennsylvania to Virginia to Missouri to Ohio to Texas -- have reported similar shortages.

"There's no doubt it's a national problem, similar to what we see in service industries as well," Curt Macysyn, executive director for the National School Transportation Association, which represents private school bus contractors, told ABC News.

MORE: Why restaurants are having a hard time finding staff right now

The reasons are varied. One is health concerns, especially as COVID-19 cases are rising in many parts of the country due to the highly contagious delta variant.

"During COVID, people chose their health over a position," Macysyn said. "With the delta variant, I think some folks who might have considered a return are probably gonna stay on the sidelines a little bit longer."

School bus drivers often include retirees. Abbott's prior school district, in Richmond County, Georgia, lost many older drivers during the pandemic, he said. "A lot of them left, just really out of health reasons and concerns for their own health. And you can't blame them." 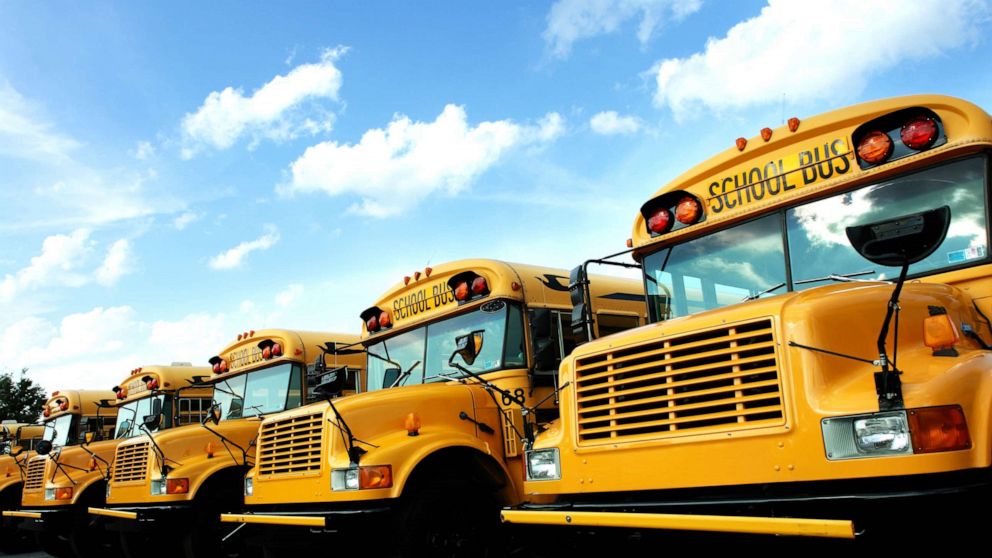 STOCK PHOTO/Getty Images
A Line of school buses is seen in this undated stock image.

Money, from enhanced unemployment benefits to a lack of full-time hours preventing people from applying, also may be a factor, Macysyn said. People with a commercial driver's license, which is required to be a school bus driver, also may have been drawn to other jobs in the transportation industry that offer more competitive pay, Abbott said.

The average hourly wage nationwide for a school bus driver is $17, according to Salary.com.

With DMV offices closed or offering limited hours during the pandemic, that also may have prevented people from getting or maintaining their CDL, Macysyn said. "When a lot of states' DMV agencies were closed, we weren't filling the funnel with new drivers."

To recover, schools need to attract new people into the industry by highlighting the benefits of the position, such as flexible hours and summers off, Macysyn said.

"I do think that this is an opportunity for us to highlight the industry and attract new individuals into the profession," he said. "It's a matter of putting focus and attention on a level of outreach that we haven't done before."

The Savannah-Chatham County Public School System has been holding regular job fairs, placing advertising on billboards, social media and radio, and reaching out to former employees to let them know about pay grade changes, school officials said. The school also is looking at increasing the number of drivers who are guaranteed eight hours a day versus just five, Abbott said.

"We're pulling out all the stops," he said. "We're looking at attendance supplements for people who have great attendance because you want to reward great behavior too. ... We're working on focus groups -- what to do differently with pay, with benefits, with personal days. We're trying to get a good idea of some things we can do to make it more appealing for somebody to come drive."

The school district has conducted dozens of interviews for prospective drivers, though it can take several weeks, if not months, to get on the road once hired. New bus operators need to undergo background checks, physicals and, if they don't already have one, get a CDL, which can all take up to 12 weeks, according to Macysyn.

In the long term, the National School Transportation Association is lobbying the federal government to allow a license just for school bus drivers that would remove a repair-oriented, under-the-hood vehicle inspection requirement under the CDL test that is only relevant to long-haul truckers, Macysyn said.

"Our thought is, let's remove that barrier to entry," Macysyn said. "We know that folks have been discouraged from pursuing their CDL because of the under-the-hood requirement."

For now, with schools consolidating or removing routes amid the staffing shortages, parents are scrambling for alternatives -- such as having a family member take them, carpooling or having the students walk or bike.