It was supposed to be a normal day for Alejandra Iglesias, a junior at Harvard.

It was a Tuesday, which meant she had a full day ahead of her campus internship and then class. But everything changed with an email.

As the coronavirus pandemic spread and the Centers for Disease Control and Prevention recommended social distancing to stop the spread of the disease, Harvard students received an email on March 10 from Harvard University President Lawrence Bacow, instructing students "not to return to campus after spring recess" to "limit the exposure to the disease among members of our community."

Students living on campus were directed to "move out of their houses and ... dorms as soon as possible."

"The second we got the notification, it was a sense of shock," Iglesias, who is a first-generation college student at the university, told "Good Morning America."

"Coming to Harvard was a complete dream. And it’s just sad to say that I came here hoping that this would be my home for the next four years and to be displaced in a way like this -- it’s just a very emotional time," she said. 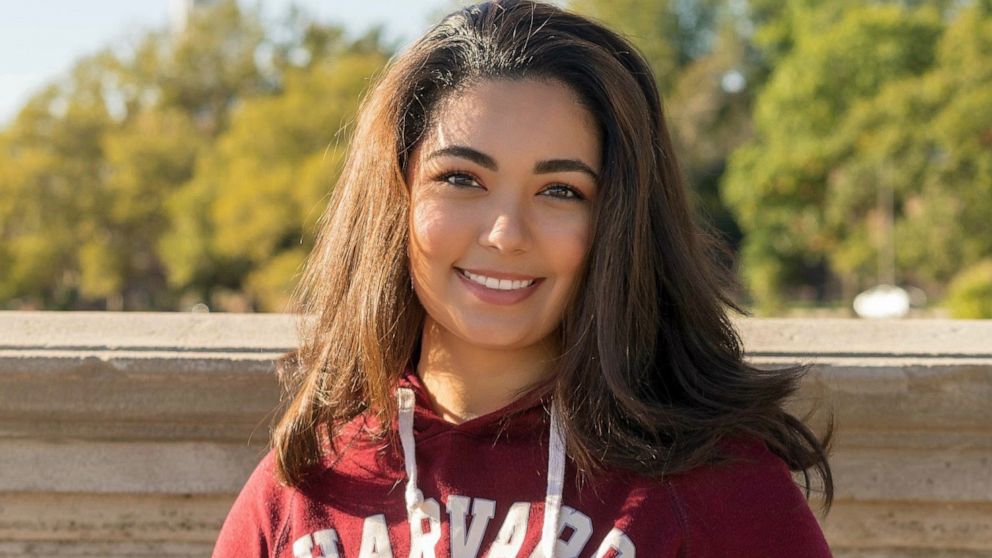 The sudden news hit low-income students who may not have the means to just pack up and leave, especially hard.

"It was very disheartening and I think it led to more confusion, not just for all students, but specifically for first-gen and low-income students," said Iglesias, who is the president of Primus, a student-run organization that represents all first-generation and low-income students. "To not know, 'How am I going to get home? Or, 'if I don’t have a place to go, what’s going to happen?'"

Boston had been Iglesias' home for the past three years and her safe haven -- especially when she and her mother became homeless last November.

But as she dealt with the uncertainty, Iglesias took action with her fellow board members at Primus to see how they could help get the proper resources for her classmates who needed help too. 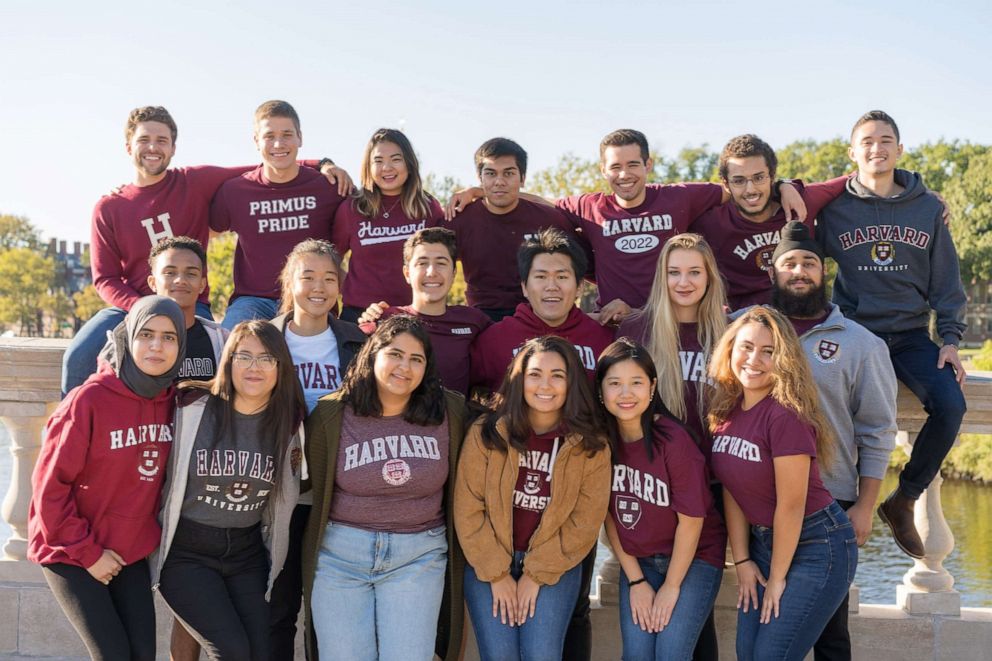 Courtesy Manuel Chavez/Harvard Primus
Members from the Harvard Primus group pose for a photo.
MORE: Widespread layoffs, influx in unemployment across US amid coronavirus

Opening up their homes

Iglesias and her colleagues identified three main urgent needs of students: storage for their belongings, housing for those who wouldn’t be able to go home and income for students who worked on campus.

With the help of another organization on campus, First Generation Harvard Alumni, they started a GoFundMe campaign and created a Google form for anyone in the area willing to open up their homes for temporary housing or storage for students.

"Having those areas of concern in mind, we began organizing on the alumni," said Dan Lobo, a Harvard alum and founder of the Harvard College First-Generation Student Union. "It’s obviously a very challenging situation, but I will say it’s been an incredible community response, which has been a sort of a bright spot in the situation."

MORE: Teacher writes 100 letters to her students after school shuts down for the year due to coronavirus concerns

In less than 24 hours after posting the Google form online, more than 900 people reached out, extending an extra room or place to stay and storage for students.

And in a matter of hours, the group raised almost $40,000 for students. Now, they’ve surpassed their goal and have raised more than $64,000 for first-generation and low-income students in need.

"It’s really just been alumni kind of spreading through our networks," said Harvard alum Ana Andrade, who reached out to current students. "It’s really been all to the credit of the mobilization of students. And then it just spread through networks, people just imagining the situation and helping out when they can." 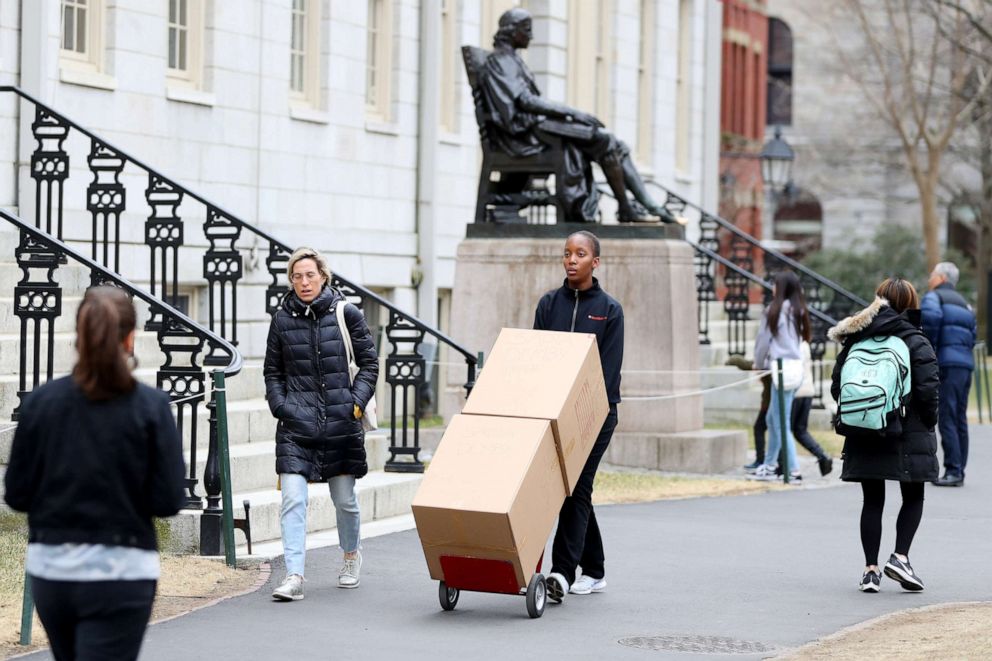 Maddie Meyer/Getty Images
Sophomore Sadia Demby moves her belongings through Harvard Yard on the campus of Harvard University on March 12, 2020 in Cambridge, Mass. Students have been asked to move out of their dorms by March 15 due to the Coronavirus (COVID-19) risk. All classes will be moved online for the rest of the spring semester.

Leaning on the first-generation community

At Harvard, there’s an undeniable sense of community among students and alums from across all generations. So, when the news of the sudden move-out spread, it came as a shock for many alums, including Mercedes Soto, who graduated from the university in 1990.

"It definitely seemed very sudden and abrupt. Most in need have the least resources," said Soto of the notice sent to students. "I just put myself in the shoes of the students."

Soto, who mentors Iglesias and a few other current students and was a first-gen student herself, was concerned how students were coping.

"I heard many students use the word 'eviction,' like 'I got an eviction notice.' If you’re coming from a low-income background where you’ve experienced housing insecurity or food insecurity and not knowing where your next meal is coming from, [that] comes with a lot of stressors."

For Andrade, 23, a first-gen college student who graduated from the university just last year, she too, was thinking about the students affected.

"If you’re a 19-year-old kid here and you’re dealing with this, it’s scary," Andrade said. "I knew of people that are in more precarious situations than my own and I think a lot of us recent grads think about other [students]."

Like Iglesias, Andrade also led a group at Harvard for students called "Act on a Dream," which supports undocumented students on campus, and knew of the financial toll that the news would have on students. She reached out to offer those on campus a place to stay.

"I made sure to reach out and say, 'there’s like, my floor, my grandmother’s and family’s house in the area,' so that if it comes down to it and if Harvard is not able to accommodate them, they have a place with me," Andrade said.

"It’s beautiful to see people come together and in times of need," she added.

While the entire Harvard community came together, uncertainty lies ahead for many students like Iglesias.

"It looks like I’ll be spending my next six months in New Jersey while I’m in the middle of figuring housing for my mom and not even having the job security and the income coming in for my term time job," she said. "A lot’s in the air right now and I really don’t know what’s going to happen next."

As the coronavirus pandemic continues to shift the lives of many students across the country to online courses or even canceled classes, everyone is adapting to a new way of learning and living.

Since the mandate to evacuate campus, the university has issued a few changes, allowing some students to remain on campus and providing more resources such as reimbursement for travel.

Harvard Dean Rakesh Khurana has also been sending updates to students, assuring them that the entire Harvard community would make it through together and bringing hope amid these challenging times.

"Throughout the remainder of this term, our faculty and staff will do everything they can to stay connected with you," Khurana wrote in an update Monday. "One thing you won’t hear from me is 'goodbye.' Because while we may have temporarily gone our separate ways, our journey together continues."