Sen. Ted Cruz returned to Texas Thursday evening a day after flying to Mexico with his family even as his state reels from a historic storm that has left hundreds of thousands of people without power and safe drinking water.

Cruz faced backlash after initial reports emerged on social media that he had jet-setted to Cancun despite the widespread crisis in Texas. Speaking with reporters outside his home upon his return Thursday evening, Cruz said in hindsight, "I wouldn't have done it." 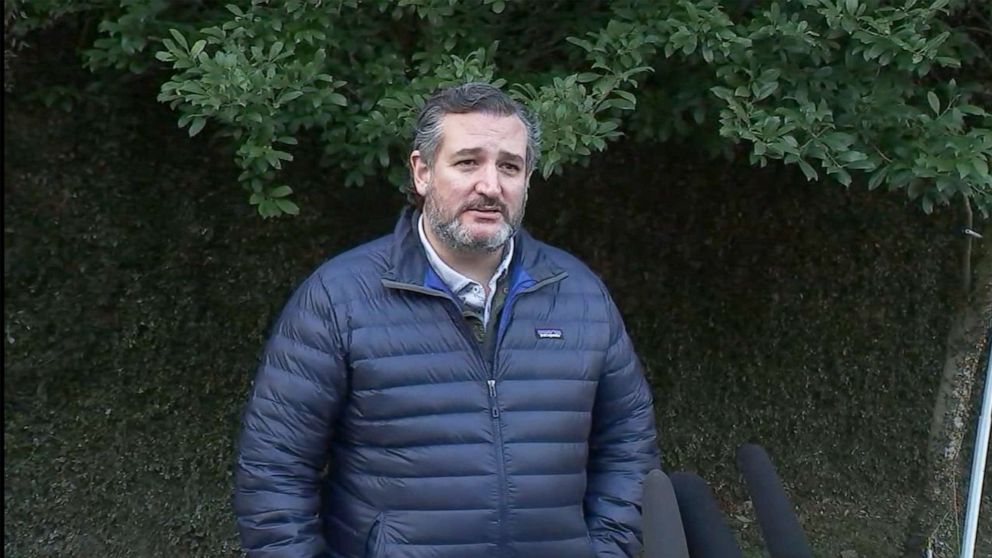 KTRK
Sen. Ted Cruz speaks with reporters outside his home in Texas after returning from a trip to Cancun, Mexico, Feb. 18, 2021.

"I understand why people are upset," he later said, adding he found some of the criticism "unfortunate." "My intention was to take care of my family."

Cruz reiterated his regret over the trip in an interview at his home with ABC's KTRK Thursday night, saying it was not his intention to "somehow diminish all the Texans that were going through real hardship" by flying off to Mexico with his family during the state's crisis.

The senator was initially scheduled to return to Texas on Saturday with his family, but changed his reservation in the morning to return Thursday evening, according to a source familiar with his travel schedule.

Cruz's office told ABC News the senator was tested Thursday morning for COVID-19 to comply with the new mandate requiring citizens to present a negative test before traveling to the United States.

"Leaving when so many Texans were hurting didn't feel right, and so I changed my return flight and flew back on the first available flight I could take," Cruz told reporters.

In a statement Thursday afternoon, Cruz said the trip was for his two daughters, Caroline and Catherine, and their friends.

"This has been an infuriating week for Texans ... Like millions of Texans, our family lost heat and power, too," Cruz said in a statement with ABC News.

"With school canceled for the week, our girls asked to take a trip with friends. Wanting to be a good dad, I flew down with them last night and am flying back this afternoon," he said.

"My staff and I are in constant communication with state and local leaders to get to the bottom of what happened in Texas. We want our power back, our water on, and our homes warm. My team and I will continue using all our resources to keep Texans informed and safe," Cruz added. 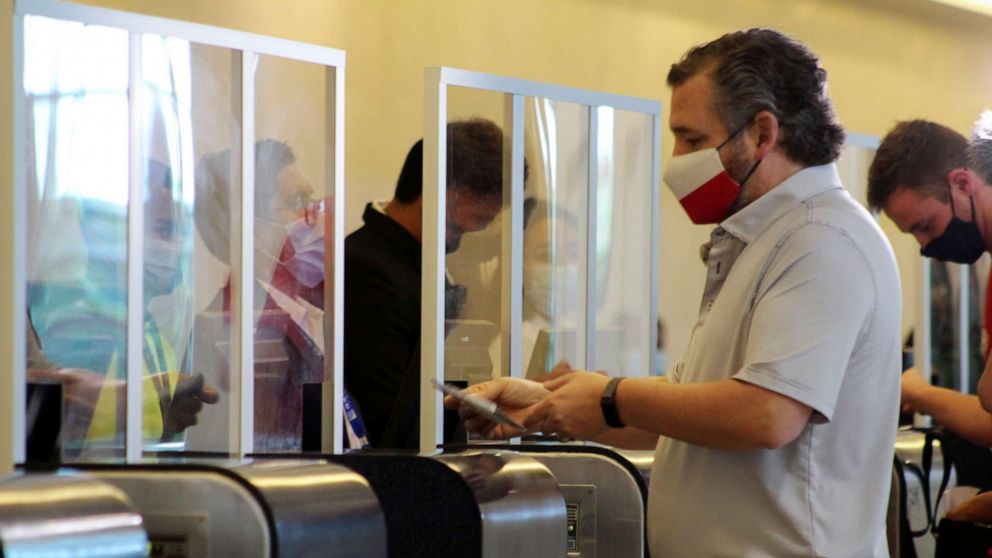 via Reuters
Sen. Ted Cruz checks his documentation at an airline counter at the Cancun International Airport before boarding his plane back to the U.S., in Cancun, Mexico, Feb. 18, 2021.

Cruz headed to Cancun for a long-planned family vacation, various media outlets had reported, including The Associated Press, CNN and Fox News.

The Houston Police Department confirmed to ABC News that Cruz's staff contacted police personnel on Wednesday requesting assistance upon the senator's arrival at the George Bush Intercontinental Airport, though they did not specify what type of assistance.

Police said he arrived at Terminal E and officers "monitored his movements" through the terminal. 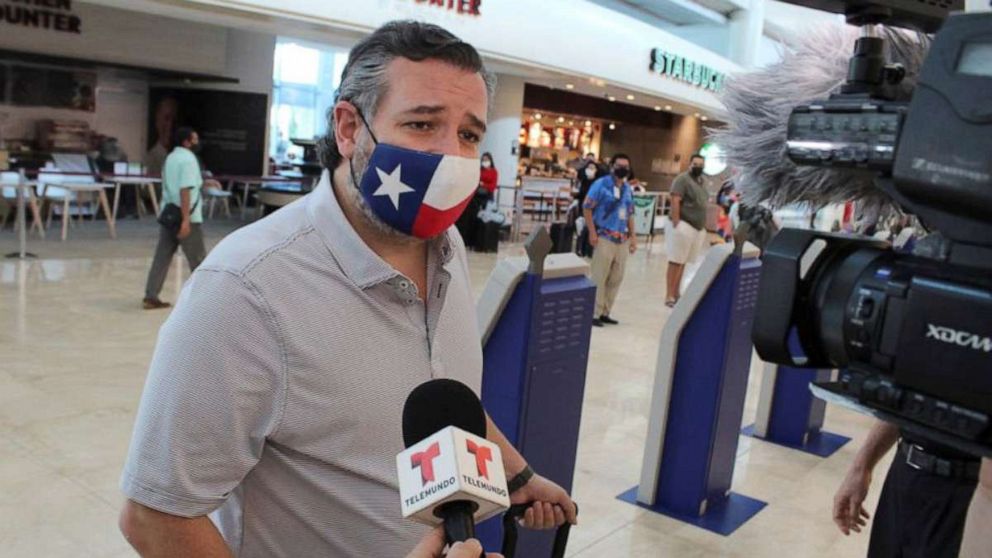 via Reuters
Sen. Ted Cruz speaks to the media at the Cancun International Airport before boarding his plane back to the U.S., Feb. 18, 2021, in Cancun, Mexico.

Critics slammed the senator on Twitter after photos emerged on social media of a man who appears to be Cruz aboard a plane.

The Lone Star state is in the midst of a crisis in the wake of a powerful storm that started Sunday, creating widespread power outages and burst pipes. Nearly 500,000 customers in Texas remained without power Thursday morning.

Houston Mayor Sylvester Turner said, "Well it's certainly much warmer where he's going" when asked about Cruz's trip during a press conference Thursday.

"My job is to stay here until the situation is resolved so that's it you know, I'm gonna let the senator speak for the senator," he added.

"That's something that he has to answer to his constituents about," state Republican Party Chairman Allen West told the AP about Cruz's travel. "I'm here trying to take care of my family and look after my friends and others that are still without power."

Texas Democrats called on Cruz to resign for seemingly abandoning his constituents in the midst of the storm.

MORE: Alexandria Ocasio-Cortez reacts to Ted Cruz's tweet on GameStop: 'You almost had me murdered'

Texas Democratic Party chairman Gilberto Hinojosa said, "Ted Cruz jetting off to Mexico while Texans remain dying in the cold isn't surprising, but it is deeply disturbing and disappointing." 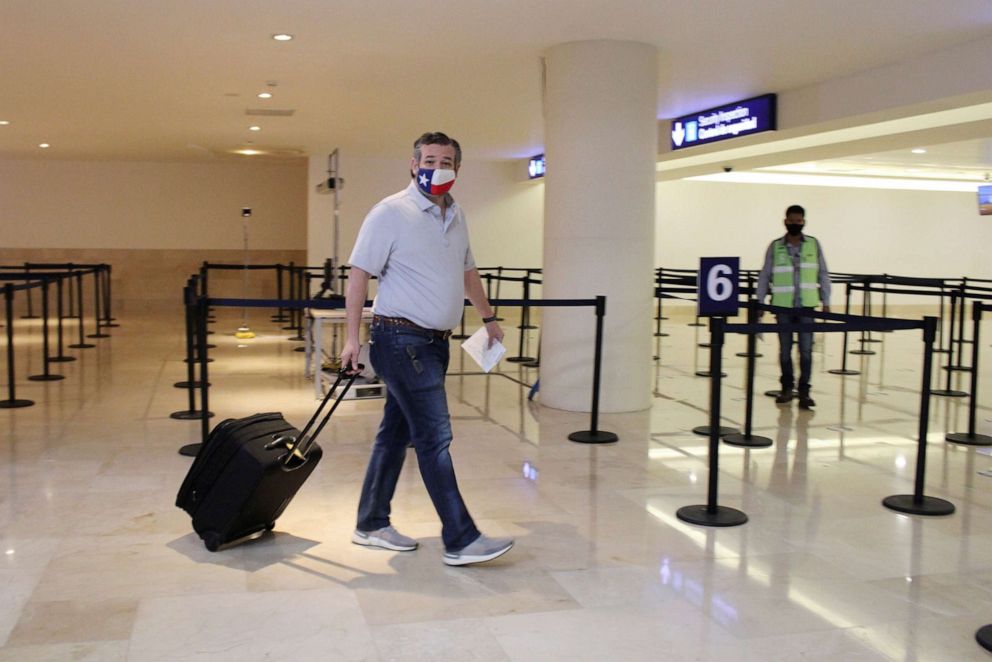 via Reuters
Sen. Ted Cruz carries his luggage at the Cancun International Airport before boarding his plane back to the U.S., Feb. 18, 2021, in Cancun, Mexico.

"The Texas Democratic Party calls on Ted Cruz to resign or be expelled from office… We must restore ethics, competence, and a government that works for the people," the group said in a statement.

Just on Monday, Cruz had urged residents to stay home in a radio interview that was shared on YouTube by his office in which he said: "So don't risk it. Keep your family safe and just stay home and hug your kids."

One day later, Cruz issued a public apology on Twitter after an old tweet of his from August resurfaced, in which he castigated California's "failed energy policies" and mocked their power grid system. 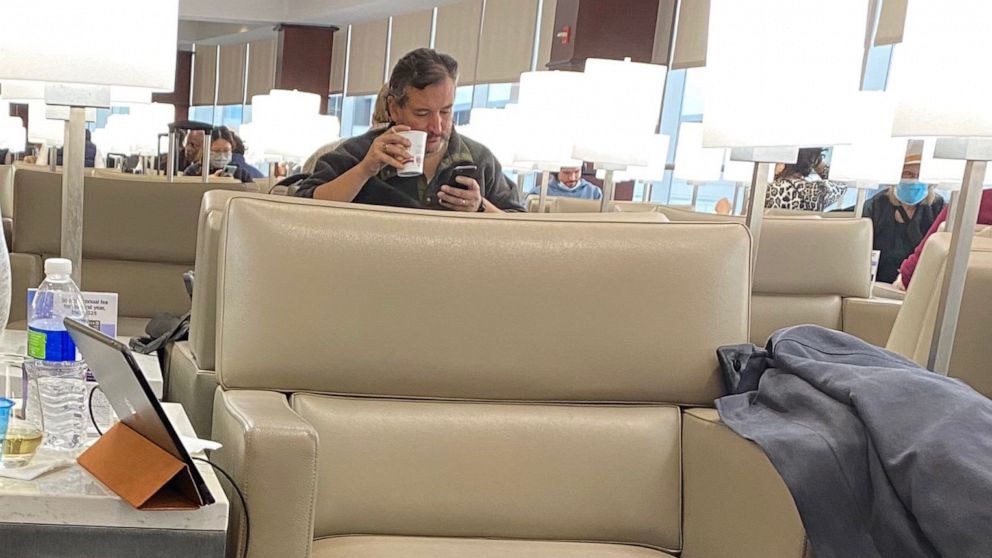 A Amatong/Instagram
Sen. Ted Cruz is seen at the United lounge at the Houston International Airport, Feb. 18, 2021.

This week's winter storm has also pushed Texas' grid system to the limit and resulted in millions being left without power on Wednesday.

"I have no defense," he wrote apologetically. "A blizzard strikes Texas & our state shuts down. Not good."

In December, Cruz eviscerated Austin Mayor Steve Adler as a "hypocrite" for vacationing in Cabo San Lucas, Mexico, during the pandemic after telling residents to stay home.