Serena Williams lost to Simona Halep at the Wimbledon final Saturday, falling short once again of an elusive landmark.

With this loss, Williams missed her latest opportunity to win her 24th Grand Slam title, which would put her tied with the record for most Grand Slam wins ever, a record Margaret Court set over four decades ago. 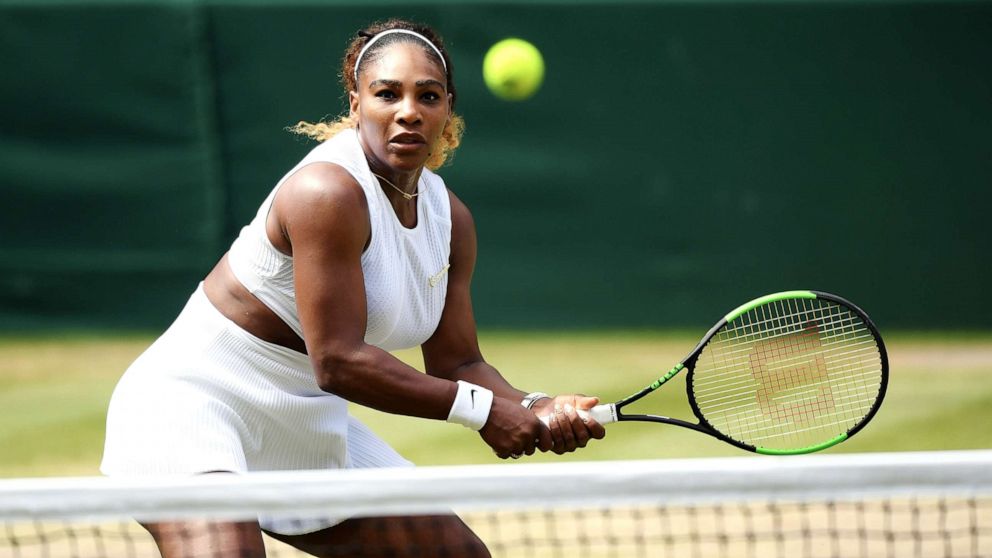 Matthias Hangst/Getty Images
Serena Williams plays a backhand in her Ladies' Singles semi-final match against Barbora Strycova of The Czech Republic during Day Ten of The Championships on July 11, 2019, in London.

Williams, 37, has been chasing that 24th win since the 2017 Australian Open, which she won shortly after learning she was pregnant. Since returning from giving birth to daughter Olympia, Williams has competed in three Grand Slam finals -- including this one at Wimbledon -- but has not won a final match.

Heading into the final, Williams appeared calm and measured, with that history-making number far from her mind.

It's really not about 24, 23 or 25. It's about going out there and giving my best no matter what. No matter what I do, I will always have a great career.

In an Instagram story between the semifinal and final, she delightfully kicked around a soccer ball with her daughter. On Twitter Thursday, Williams posted about one of her favorite topics -- superheroes -- asking, "Hela or Thanos- who wins?" 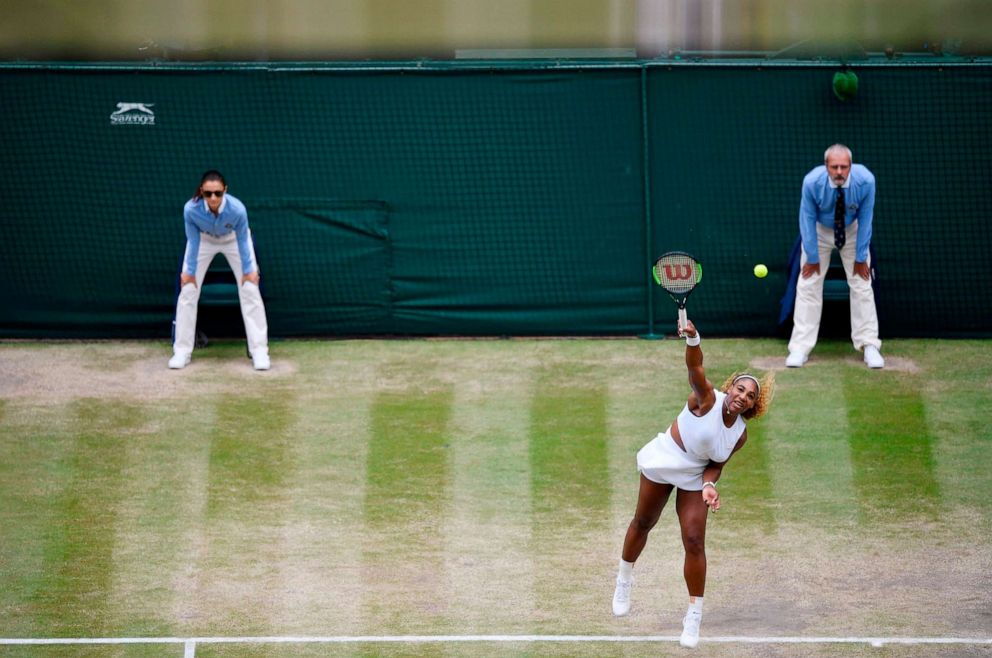 "It's really not about 24, 23 or 25. It's about going out there and giving my best no matter what. No matter what I do, I will always have a great career," she said at the tournament Thursday, according to Reuters. "I just kind of let it go this morning. I feel really calm about it."

The tennis icon breezed into the final with a semifinal match Thursday against Czech player Barbora Strýcová. She won in just under an hour in straight sets, 6-1, 6-2. 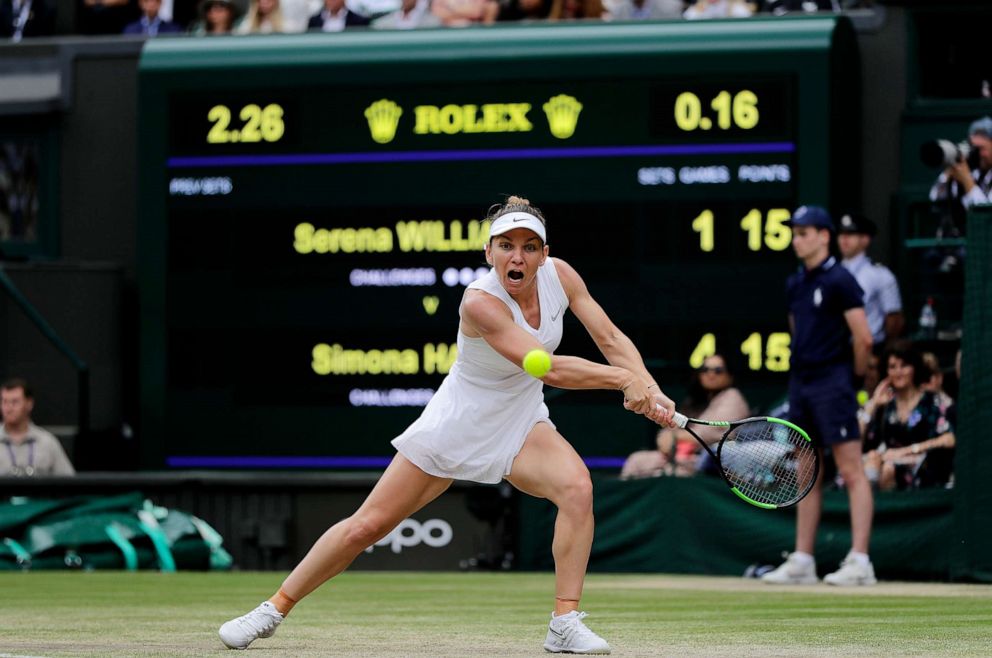 Ben Curtis/Getty Images
Simona Halep of Romania plays a backhand in her Ladies' Singles final against Serena Williams of the U.S. during Day twelve of The Wimbledon Championships in London, July 13, 2019.

But her challenger, Halep, 27, was coming in similarly charged up. She won her semifinal match over Ukrainian Elina Svitolina also in straight sets Thursday, 6-1, 6-3. Halep had previously beaten teen Wimbledon phenom Coco Gauff -- who knocked Williams' sister, Venus, out in the first round -- in straight sets.

(MORE: Teen tennis phenom who beat Venus Williams is out at Wimbledon)

Halep, who had won one Grand Slam before Saturday -- the 2018 French Open -- described herself Thursday as "desperate to win Wimbledon," according to Reuters, adding that she was focused more on that for herself than on Williams' record.

Williams caught attention during this Wimbledon for more than her hunt for 24.

In the mixed doubles, she played with Andy Murray, who said at the beginning of this year that he would retire from tennis after Wimbledon due to a hip injury.

The power duo made it to the round of 16 before falling, but were widely praised for their combined skills, including Williams' ability to return a 138 mph serve from Fabrice Martin -- apparently surprising even herself.

How about this for a return? 😱#Wimbledon | @serenawilliams pic.twitter.com/120ThjXFjM

Williams also had one royal supporter in the stands at Wimbledon: her pal Meghan Markle, the Duchess of Sussex.

Even so, what really mattered was on the court in the ladies' singles competition.

Shaun Botterill/Getty Images
Simona Halep of Romania celebrates championship point in her Ladies' Singles final against Serena Williams of the U.S. during Day twelve of The Wimbledon Championships on July 13, 2019, in London.

It's been a long road to this Wimbledon final for Williams, who won her first Grand Slam in 1999, and the path to this final since her return from pregnancy has not been easy. Her last Grand Slam final was a dramatic one at the 2018 U.S. Open, where her loss to Naomi Osaka was marred by a controversial confrontation with an umpire.

That last final left her shaken, she explained in an essay for Harper's Bazaar published this month, and uneasy about picking a racket back up.

But, she wrote, her daughter inspired her. 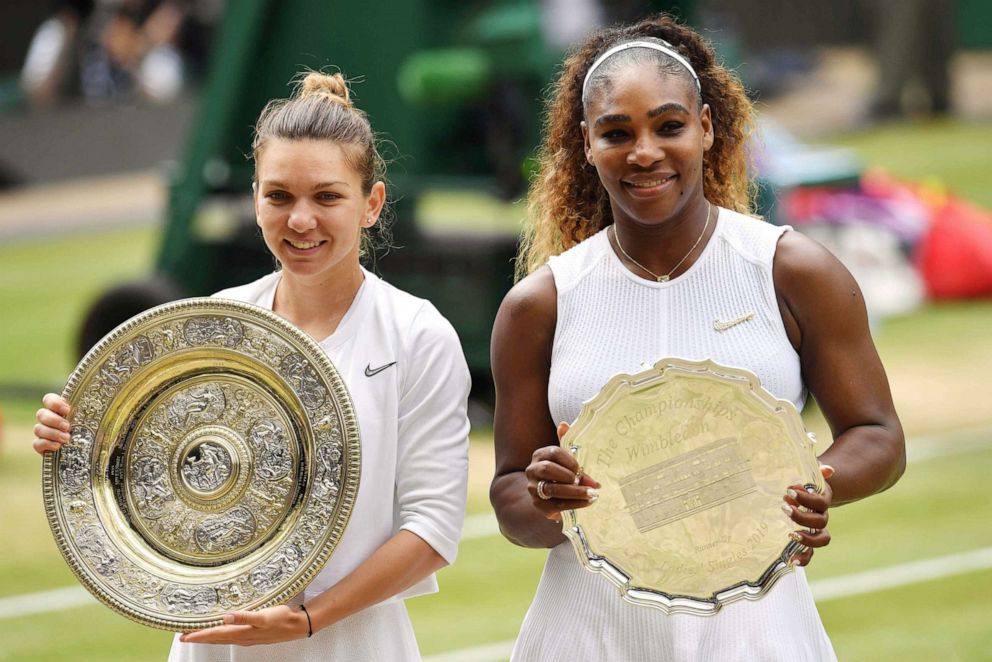 "Love breathes life and newfound perspective into people," Williams wrote. "It is not about quitting when someone presents a challenge; it's about getting up when you are down, dusting yourself off and asking, 'Is that the best you got?'" 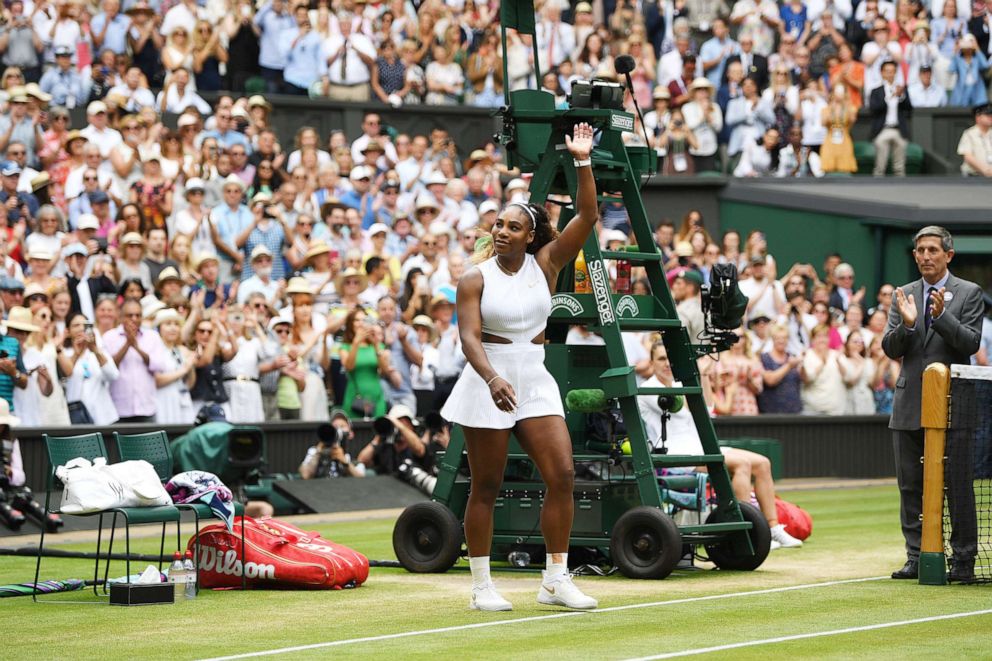 Shaun Botterill/Getty Images
Runner up Serena Williams of U.S. acknowledges the spectators as she walks up to receive her trophy following her Ladies' Singles final against Simona Halep of Romania during Day twelve of The Championships in London, July 13, 2019.

Her next opportunity for another Grand Slam title will be at the U.S. Open next month.