A hunger strike that started in Phoenix has made its way to the nation's capital. Students from different parts of the U.S. have gathered outside the White House participating in a hunger strike which they say is to help get the Freedom to Vote Act passed.

The students are part of Un-PAC, a nonpartisan, pro-democracy youth organization.

"For many months, we've been knocking on doors, we've been making phone calls, we've been meeting with senators, and it hasn't been enough," Shana Gallagher, co-founder and executive director of Un-PAC said. "We really feel an existential urgency around passing the Freedom to Vote Act, the federal democracy reform package that the Senate has landed on before the end of the year."

The hunger strike began in Phoenix on Dec. 6. On the fourth day of the strike, protesters met with Sen. Kyrsten Sinema, D-Ariz to discuss the legislation. 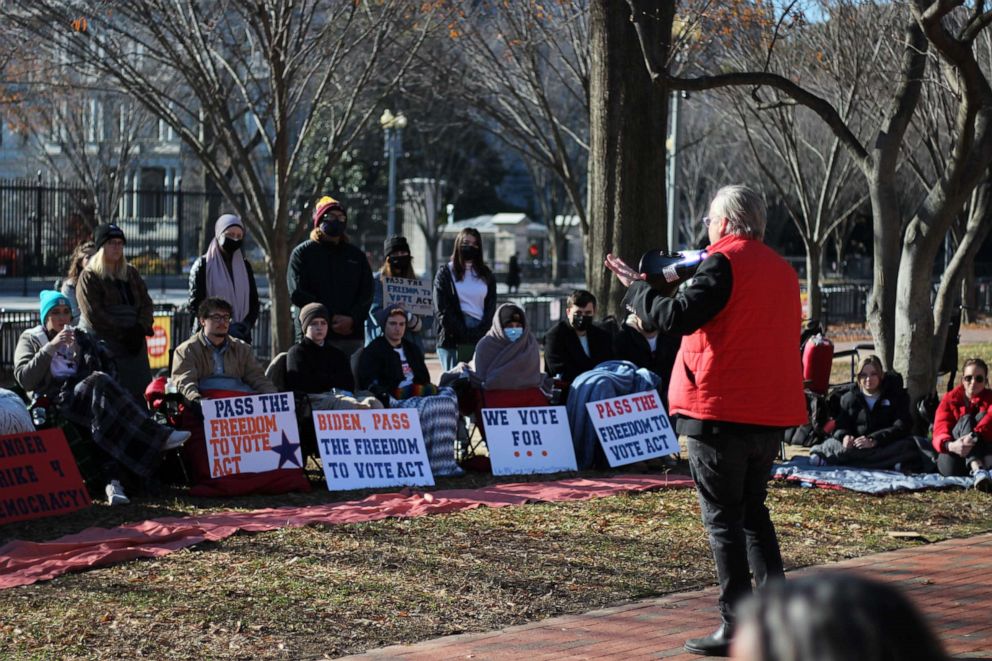 "She reiterated her support for the Freedom to Vote Act, and we hope desperately that when the time comes, she will do whatever it takes to pass the bill," Gallagher said. "But the meeting did go well enough that we decided we should move our hunger strike to D.C. because the person who needs to be prioritizing the passage of this bill now is President Biden."

As the group is about to enter the third week of their hunger strike, they say that many are feeling the impact of not eating.

"Every morning, I feel like I've been hit by a bus of exhaustion," Joseline Garcia, co-founder and the national organizing director of Un-PAC said. "My stomach feels like it's been twisted and tied up into knots, and there are sharp pains as if knives are poking it." 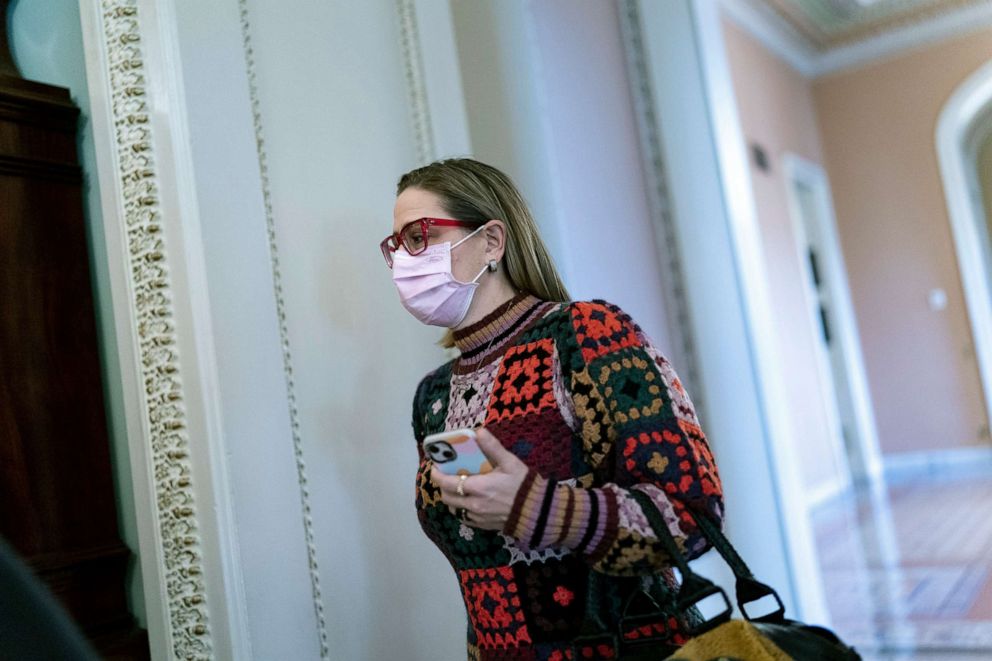 J. Scott Applewhite/AP
Sen. Kyrsten Sinema heads to a Democratic Caucus meeting as the Senate continues to grapple with end-of-year tasks at the Capitol, Dec. 16, 2021.

Before taking part in the hunger strike, the group discussed the risks, Garcia said.

"We considered the risks soon after we started considering this as a serious tactic," Garcia said. "We do have a team of medical professionals that check on us twice a day, to see where everyone is at."

The group has received online support from celebrities including Kerry Washington and Mark Ruffalo.

Our freedom to vote is on the line, and so are their futures. Thank you to the brave young people of @LetsUnPAC on Day 11 of a #HungerStrike4Democracy. @POTUS, please help make sure the #FreedomToVoteAct passes this year!

"When we are able to get access to platforms that are willing to amplify our message, it helps spread the word which will be necessary to move the Senate and President Joe Biden," Garcia said.

MORE: Democrats leave for the holidays with much unfinished business

Even though members of Congress have left Washington, D.C., for the holidays and the Senate is not scheduled to return until Jan. 3, some strikers including Callynn Johnson, a student at the University of Central Florida who flew to participate in the strike, say they remain committed to seeing this hunger strike through until they see movement on the Freedom to Vote Act.

"The current plan is that this is an indefinite hunger strike until we do see this bill passed. And as much as I would love to go home for the holidays and see my family, this very much depends on whether the Senate prioritizes this issue," Johnson said.