Thousands of protesters gathered outside the Supreme Court of the United States on Wednesday as it heard arguments in the most serious legal challenge to Roe vs. Wade in 30 years, sparking passion on both sides of the heated abortion battle.

More demonstrations were expected later Wednesday in what turned into a dramatic scene of dueling rallies as the court considered the most significant abortion rights case in decades. 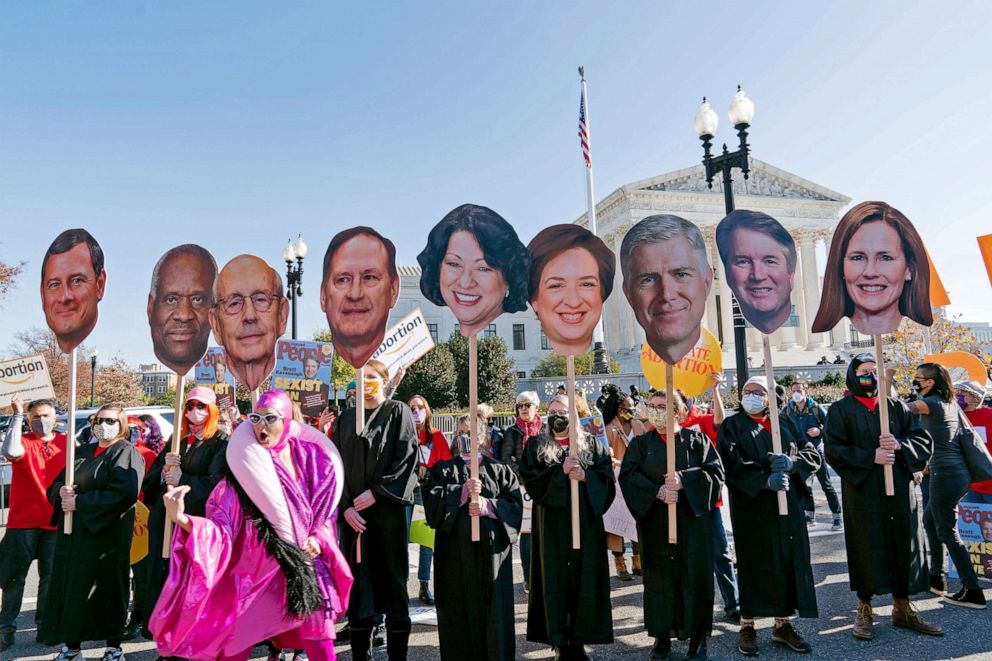 Jose Luis Magana/AP
Abortion rights advocates holding cardboard cutouts of the Supreme Court Justices, demonstrate in front of the U.S. Supreme Court, Dec. 1, 2021, in Washington, D.C. as the court hears arguments in a case from Mississippi, where a 2018 law would ban abortions after 15 weeks of pregnancy, well before viability.

The case involves a Mississippi law that bans nearly all abortions after 15 weeks of pregnancy with no exceptions for rape or incest -- breaking Roe precedent that doesn't allow states to prohibit the termination of pregnancies prior to fetal viability outside the womb at roughly 24 weeks, according to medical experts.

Outside the court, two sides formed, separated by an invisible but deeply ideological barrier.

"The 15-week ban was never about protecting pregnant people, but about controlling their bodies," said Jarvis Dortch, executive director of the American Civil Liberties Union in Mississippi, following the oral arguments. "The problems that we face in Mississippi aren't just our state's problems or the South's problems. They're problems we must face together." 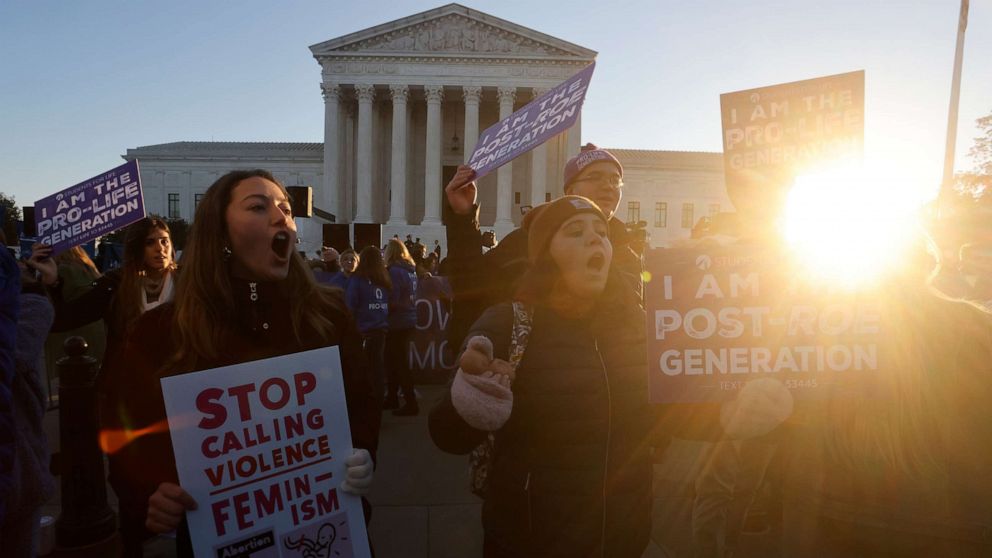 Women supporting abortion rights told ABC News they traveled from all of the country -- including from Ohio, Pennsylvania, Virginia, New York and Rhode Island -- taking time off work to hoist signs reading, "abortion is healthcare," "grow abortion power," "defend women," "hands off my body'" and "equality begins in the womb." They repeatedly chanted in unison, "My body, my choice!"

Asked about the possibility of the justices crafting a middle ground, a woman from Washington told ABC News there is no such thing.

"These are our rights. They've been recognized for years. It's settled," she said. 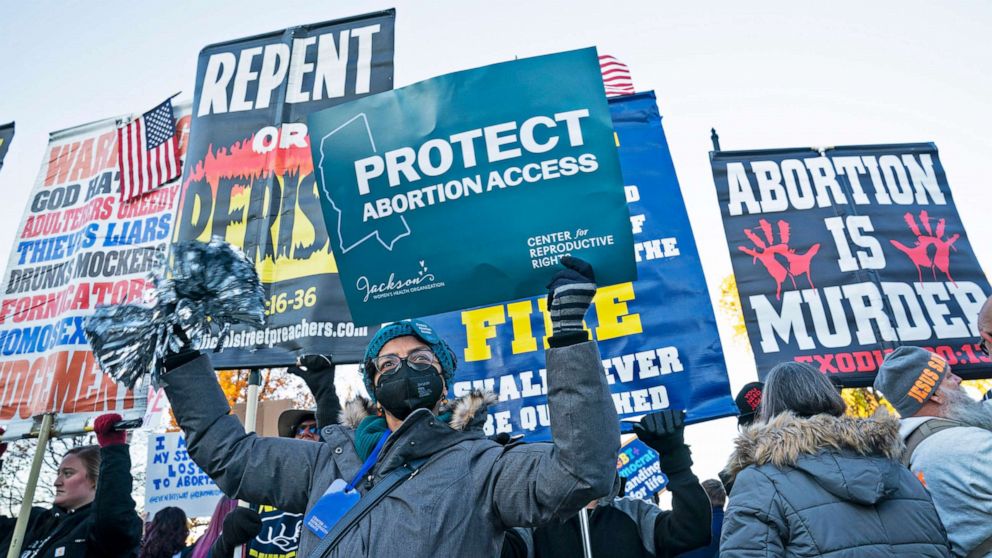 Jack Gruber/USA Today Network
Protesters, demonstrators and activists gather in front of the U.S. Supreme Court as the justices hear arguments in Dobbs v. Jackson Women's Health, a case about a Mississippi law that bans most abortions after 15 weeks, on Dec. 1, 2021 in Washington, D.C.

Meanwhile, abortion opponents carried crosses, prayed the rosary and sang hymns. ABC News' Devin Dwyer reported the sense from many is that this is the consequential moment they've been praying God would deliver.

Ibah, a NICU nurse from Virginia, arrived after her shift with a coworker to show protest abortion.

MORE: Parties prep for earthquake over future of abortion rights: The Note

Across the street, anti-abortion activists lined the sidewalk in the shadow of the U.S. Capitol holding dozens of oversized images of bloody aborted fetuses. Students from Liberty University arrived, with one telling ABC News more than 20 charter buses had come from the school to Washington. 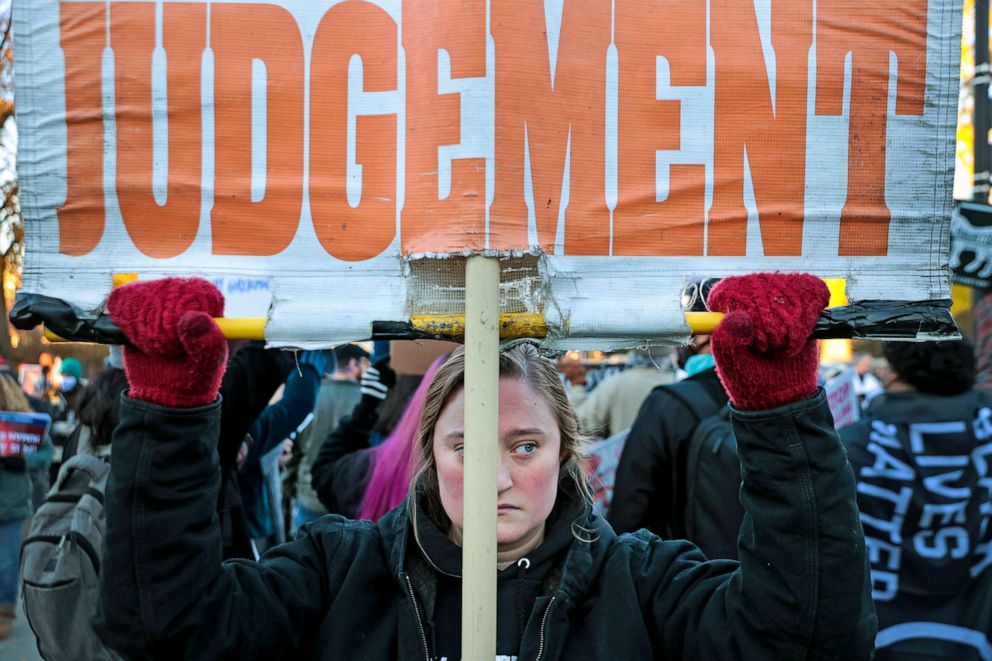 Chip Somodevilla/Getty Images
Protesters, demonstrators and activists gather in front of the U.S. Supreme Court as the justices hear arguments in Dobbs v. Jackson Women's Health, a case about a Mississippi law that bans most abortions after 15 weeks, on Dec. 1, 2021 in Washington, D.C.

Speeches from both sides boomed over separate microphones, as each side fought to dominate.

At one point, a woman protesting against abortion rights chanted "Hey, hey, ho, ho, Roe v. Wade has got to go," as others on her side began to encircle demonstrators holding orange letters that spelled out "abortion rights."

Amber Gavin, 33, an independent abortion provider from Philadelphia who travels to North Carolina and Florida for her work, took the train to the nation's capital, instead, on Wednesday to show her support.

"Unfortunately, you know, we see a lot of anti-abortion protesters outside our clinic, harassing our staff and our patients. It's something that we deal with on a daily basis and it does make care, nobody should be forced to go through that as they're accessing basic health care," Gavin told ABC News. 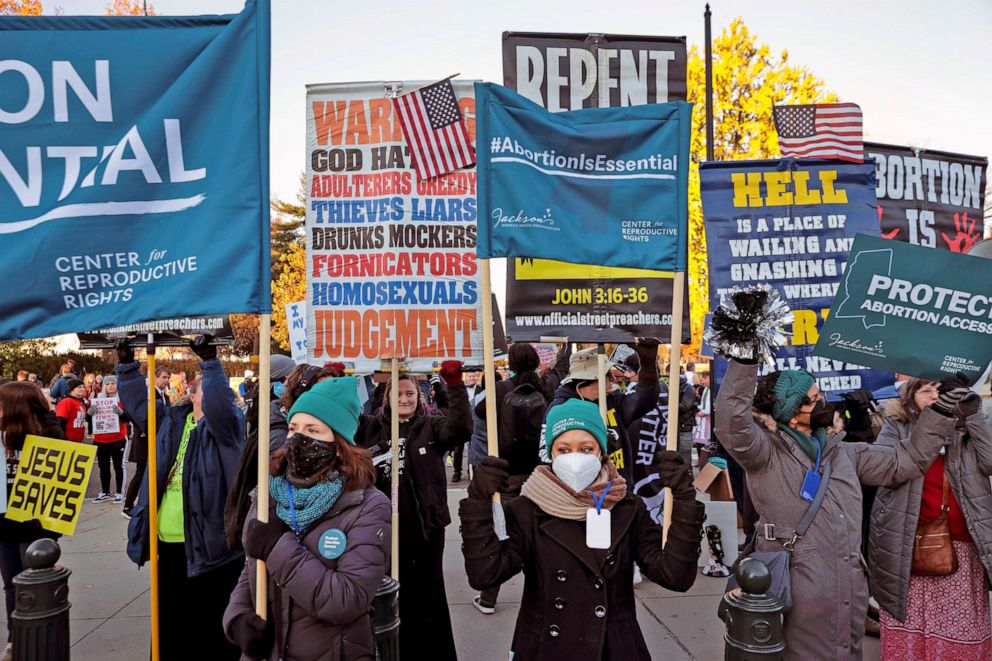 Chip Somodevilla/Getty Images
Protesters, demonstrators and activists gather in front of the U.S. Supreme Court as the justices hear arguments in Dobbs v. Jackson Women's Health, a case about a Mississippi law that bans most abortions after 15 weeks, on Dec. 1, 2021 in Washington, D.C.

Kimberly McGuire, 36, executive director of Unite for Reproductive & Gender Equity, said she came to the court on behalf of young women and people of color living in the Midwest and the South who were unable to come and speak for their own constitutional right.

"There are people in every single state who are poised to fight back if this court decides the wrong way, who will be on the steps of their state legislatures, who will be speaking out and fighting to get this right back," McGuire told ABC News.

The state of Mississippi, bringing its case to the high court after lower courts rejected it, argues Roe was wrongly decided and that each state should be allowed to set its own policy. 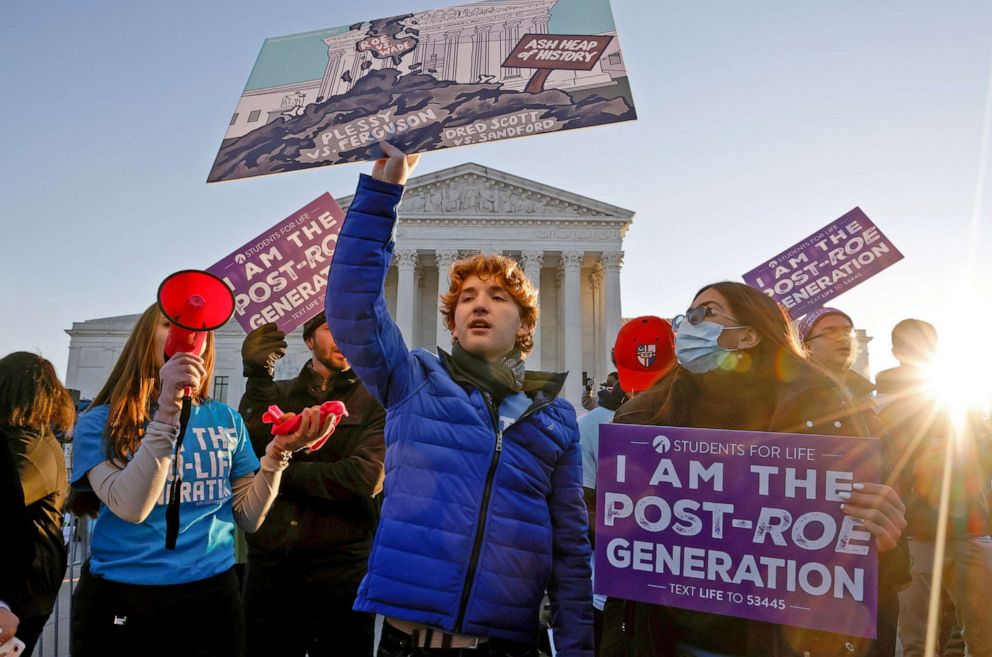 Jonathan Ernst/Reuters
Protesters, demonstrators and activists gather in front of the U.S. Supreme Court as the justices hear arguments in Dobbs v. Jackson Women's Health, a case about a Mississippi law that bans most abortions after 15 weeks, on Dec. 1, 2021 in Washington, D.C.

The Center for Reproductive Rights, a pro-abortion rights organization, which argues the decision to have an abortion should be left to a woman and her doctor, held a morning rally to kick off the historic day where women defended their constitutional right to an abortion and shared their own stories of having one.

"Having access to abortions made me a better parent because I was able to parent on my terms," said Kenya Martin, a pro-abortion rights activist outside the court.

A sea of abortion rights advocates huddled around a podium as movement leaders rallied the crowd's spirits ahead of arguments on Wednesday.

Justice Sotomayor: "The sponsors of this bill, the House bill, in Mississippi, said we're doing it because we have new justices...Will this institution survive the stench that this creates in the public perception, that the Constitution and its reading are just political acts?" pic.twitter.com/aXz9fo5L3q

"Abortion is not our dirty little secret. We did what's best for us and that's what matters," Martin added.

Shannon Brewer, director of Jackson Women's Health, the last abortion provider in Mississippi, made an argument for public health as well, reminding of the days before Roe when women died in resorting to so-called "back-alley" abortions.

"If you make abortion illegal, abortion does not stop," she said. 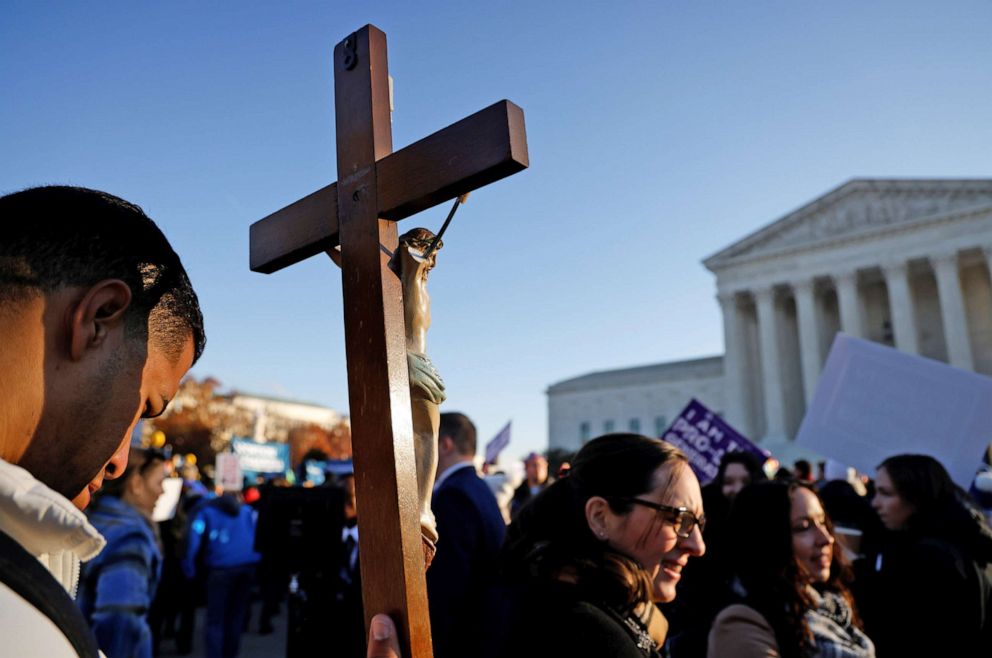 Jonathan Ernst/Reuters
Protesters, demonstrators and activists gather in front of the U.S. Supreme Court as the justices hear arguments in Dobbs v. Jackson Women's Health, a case about a Mississippi law that bans most abortions after 15 weeks, on Dec. 1, 2021 in Washington, D.C.

Lawmakers, including Senate Majority Leader Chuck Schumer, made the short trek from the Capitol to outside the Supreme Court to show support for their respective sides. Rep. Marjorie Taylor Green, R-Ga., chatted with anti-abortion protesters, while Rep. Cori Bush, D-Mo., who has shared her own story of getting an abortion, spoke to a fired up crowd to demand "freedom" and "justice."

"I'm a lover of liberty and I'm a lover of justice. Abortion care is a constitutionally protected human right and we demand it stays that way," Bush said. 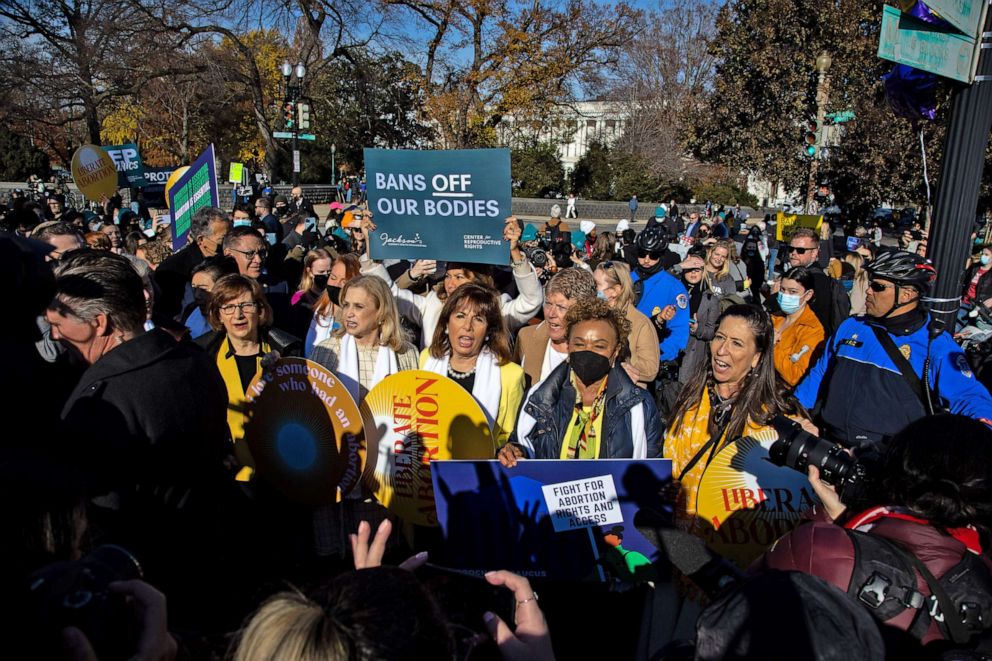 Bryan Dozier/Shutterstock
A group of Democratic members of Congress march to join the crowd at the Supreme Court in Washington, D.C. on Dec. 1, 2021, as arguments begin in the high-profile Mississippi abortion case of Dobbs v. Jackson Women's Health Organization.

Majorities of Americans support the Supreme Court upholding Roe v. Wade and oppose states making it harder for abortion clinics to operate, according to an ABC News/Washington Post poll this month. Three in four Americans, including majorities of Republicans, independents and Democrats, say the decision of whether or not to have an abortion should be left to a woman and her doctor.

Separately, the Supreme Court has a decision pending in a separate dispute over Texas' unprecedented six-week abortion ban, SB8, which has denied women in Texas of the constitutional right to an abortion for nearly three months. Activists on Wednesday took aim at the Texas law, as well. 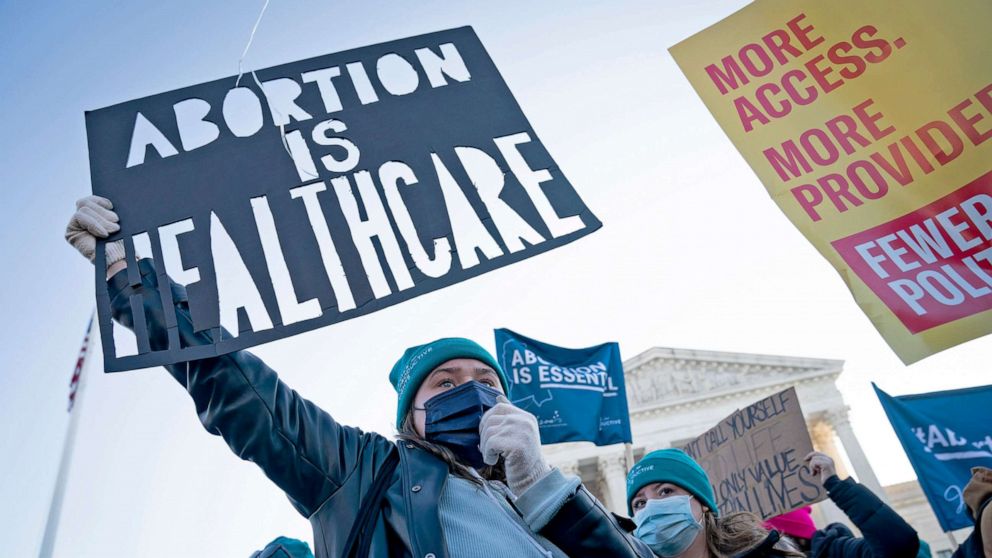 Jack Gruber/USA Today Network
Protesters, demonstrators and activists gather in front of the U.S. Supreme Court as the justices hear arguments in Dobbs v. Jackson Women's Health, a case about a Mississippi law that bans most abortions after 15 weeks, on Dec. 1, 2021 in Washington, D.C.

Amid the passion outside, inside, the court's six-member conservative majority appeared headed toward altering 30 years of settled law protecting a woman's right to end a pregnancy before fetal viability and uphold Mississippi's ban on abortions after 15 weeks.

"We are the majority," Nancy Northup, president and CEO of the Center for Reproductive Rights, told the crowd. "And we stand in the light."