Hundreds of thousands of young people have taken to the streets for the Global Climate Strike to raise awareness on climate change and urge lawmakers to create policies to help save the planet ahead of the United Nations Climate Summit next week.

The march is building on a "historic surge" of student protests and strikes for climate action, but adults also are formally invited to participate, according to the organizers behind the movement.

The strike on Friday is expected to include more than 1,000 locations across the U.S. and 4,500 worldwide, with more than 2,000 scientists pledging to attend as well, organizers said. 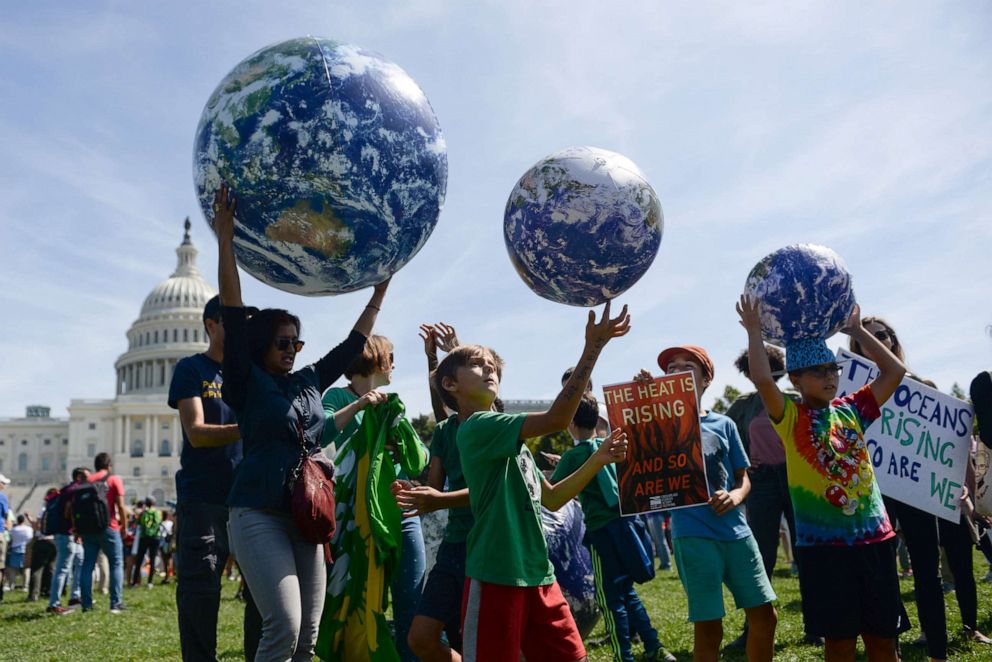 Erin Scott/Reuters
Young protesters participate in a rally near the U.S. Capitol as part of the D.C. Climate Strike March to demand action on climate change in Washington, September 20, 2019.

In London, many of the young speakers talked about “taking action” and phasing out fossil fuels by 2030. Large police presences have been reported near the various crowds, but the gatherings appeared largely peaceful.

The crowds appeared to be made up of a majority of young people. ABC News reporters spoke to one 9-year-old student in London who wrote a letter to her headmaster explaining why it was important for her to be at the protest on Friday. That young girl was accompanied by her mother, who had taken the day off work to attend with her daughter. 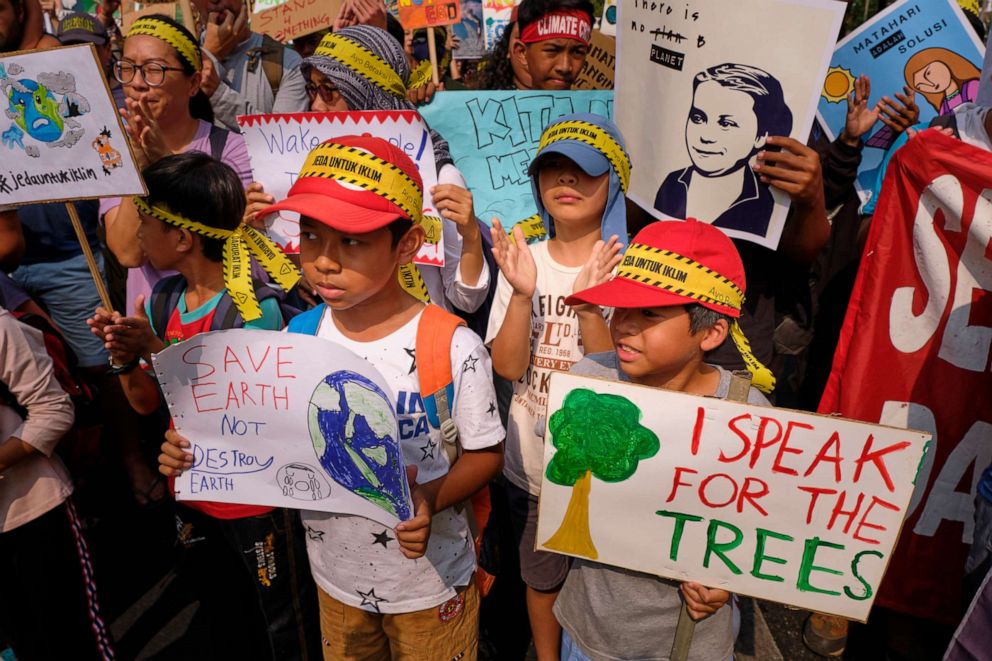 Ed Wray/Getty Images
School children participate in a demonstration calling for action on climate change on September 20, 2019, in Jakarta, Indonesia. 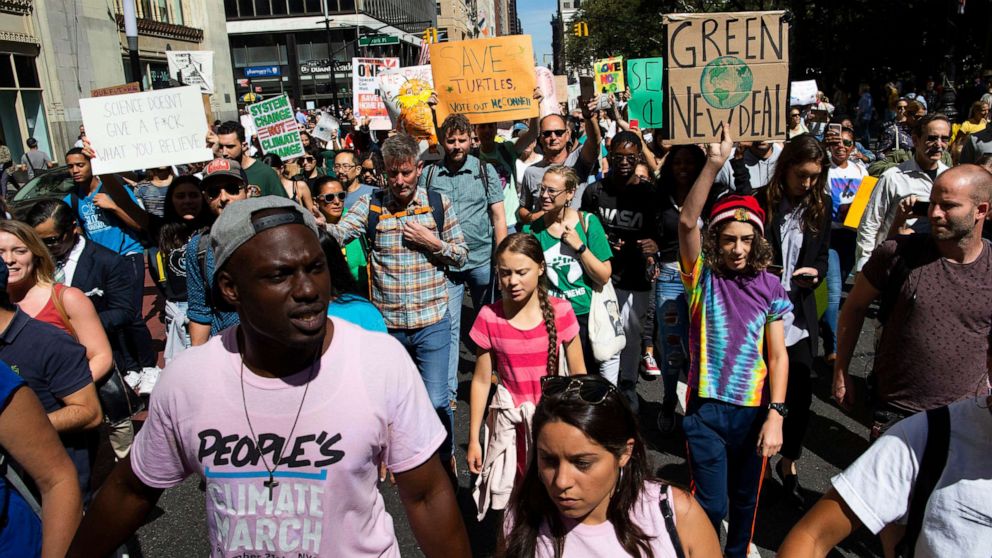 The lead organizer for the New York City march, 19-year-old Shiv Soin, told ABC News that more than 15,000 people have said they're interested in attending on the event's Facebook page. 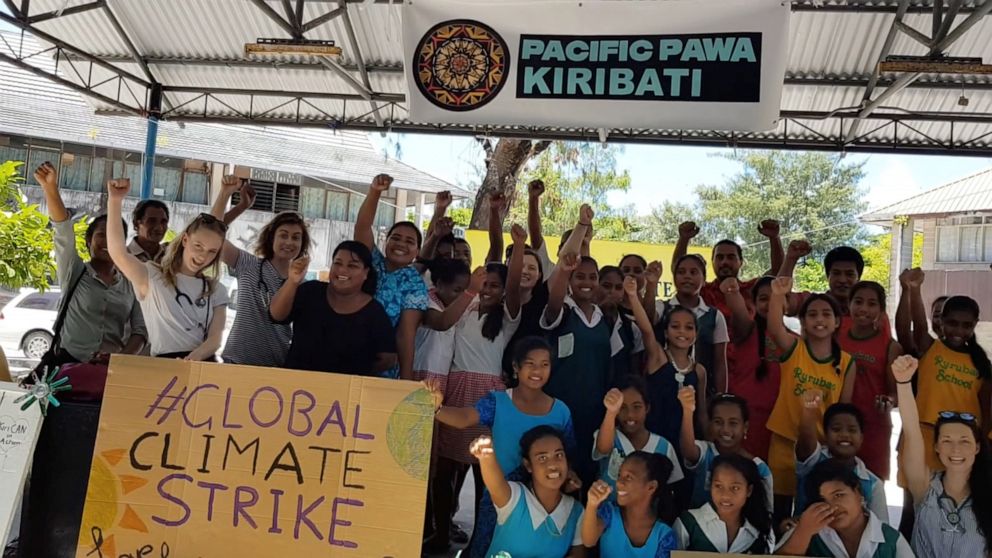 Jess Lugsdin via Reuters
Students from various schools participate in a climate change protest in Tarawa, Kiribati, September 20, 2019 in this picture obtained from social media. 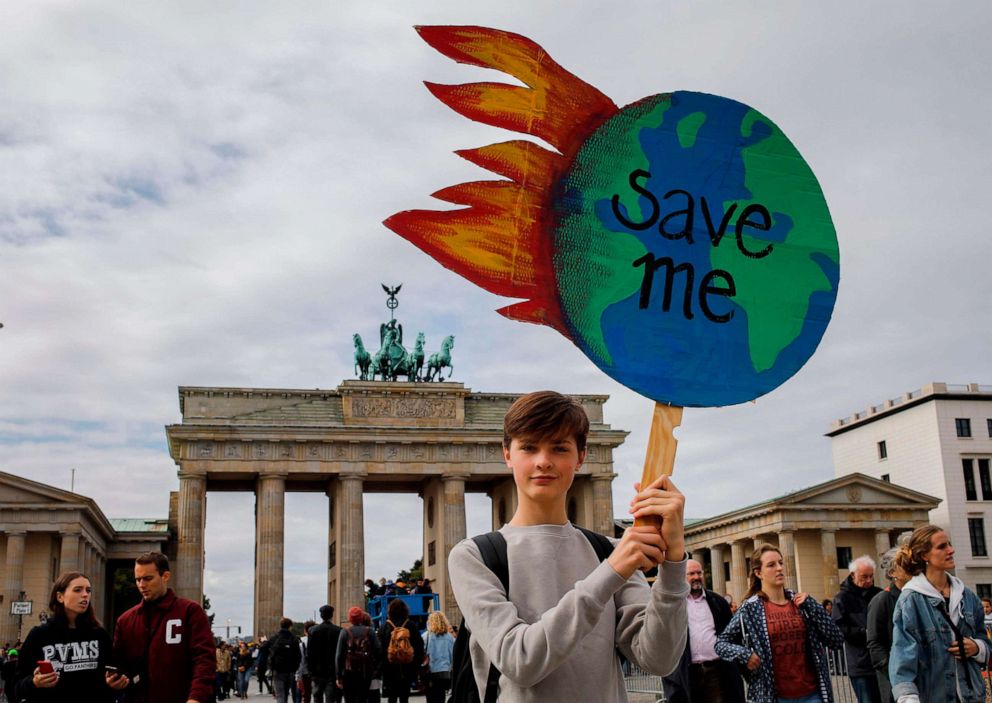 David Gannon/AFP/Getty Images
A protester holds a globe-shaped sign reading "Save Me" during the "Fridays for Future" demonstration in Berlin during a protest for climate action on September 20, 2019, part of a global climate action day.

"We're going to hold them accountable," he said.

Soin, a politics and economics major at New York University, became passionate about the climate fight after returning to New Delhi in 2011 to attend his grandmother's funeral, where he said he was hospitalized due to the poor air quality. 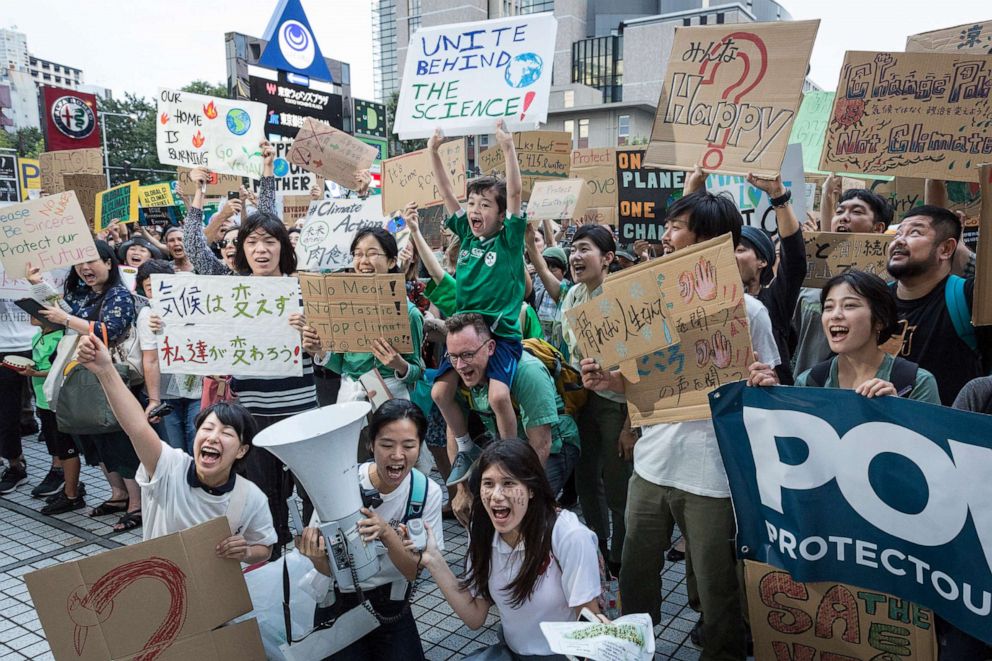 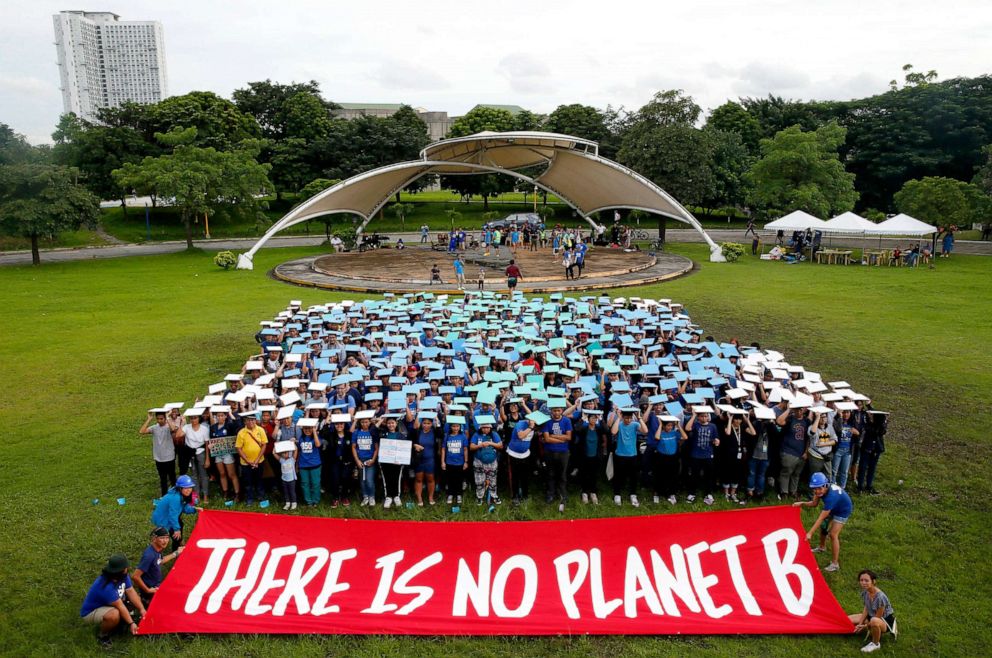 Bullit Marquez/AP
Environmental activists, mostly students, display their message in front of "a human globe" formation to coincide with the global protests on climate change Sept. 20, 2019, at the University of Philippines campus in Quezon city northeast of Manila.

Demonstrators in New York will meet at a rally in Foley Square and march south to Battery Park, where 16-year-old Swedish climate activist Greta Thunberg will be among the speakers, Soin said.

(MORE: Experts explain how the Brazilian wildfires became so devastating and what can be done to save the rain forest)

On Wednesday Thunberg implored U.S. lawmakers at the House Foreign Affairs Committee to "listen to the science" and take "real action" to curb carbon emissions. 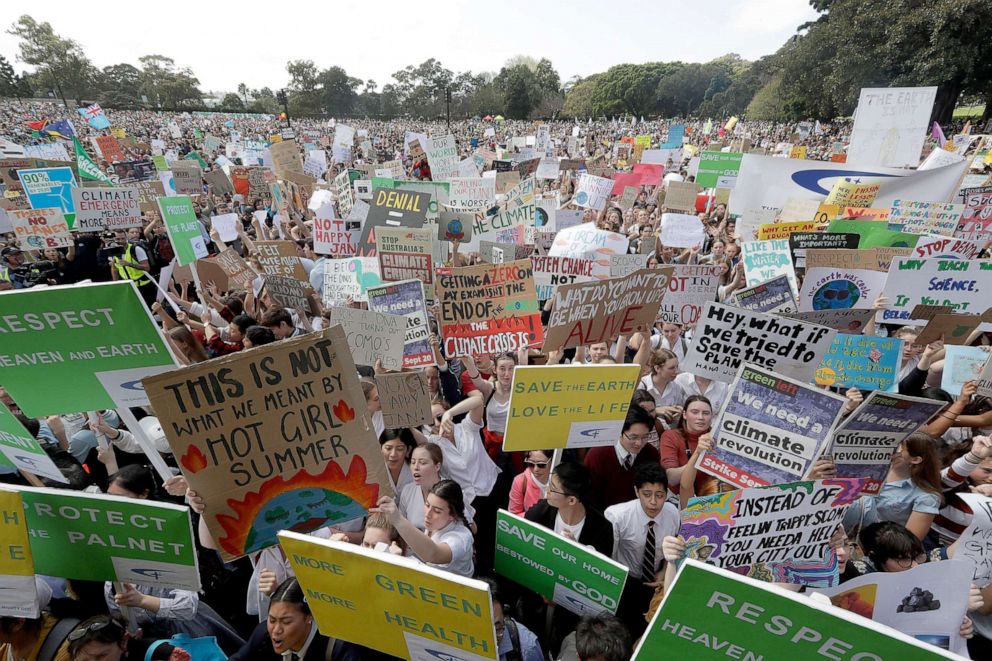 Rick Rycroft/AP
Thousands of protestors, many of them school students, gather in Sydney, Friday, Sept. 20, 2019, calling for action to guard against climate change. 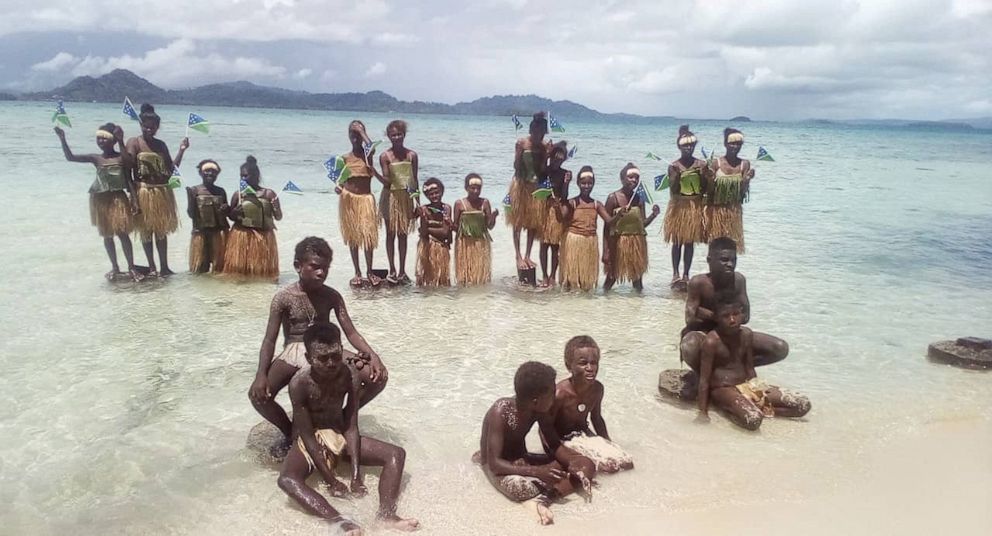 New York City Public Schools will be excusing 1.1 million students from class on Friday -- with parental permission -- so they can participate in the strike.

Activists began posted photos of the posters created for the strike earlier in the week. 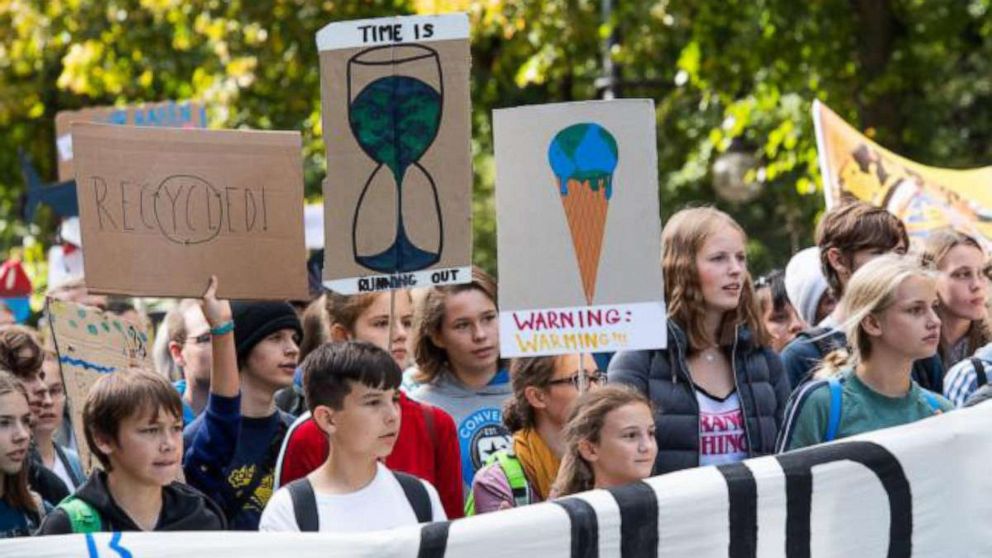 Christophe Gateau/dpa via Newscom
Demonstrators carry banners and posters on the street of June 17, in Berlin, Sept. 20, 2019. 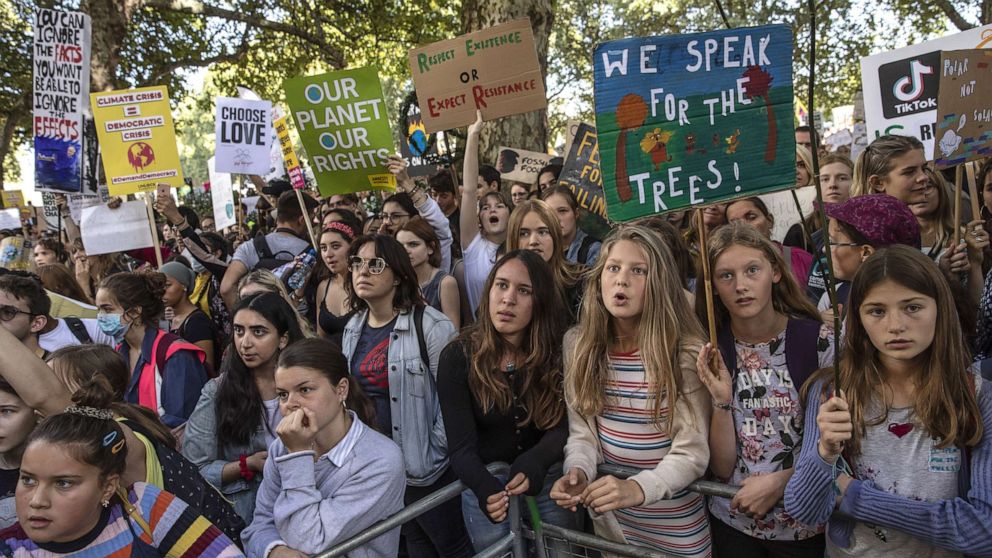 Dan Kitwood/Getty Images
Children listen to speakers as they attend the Global Climate Strike on September 20, 2019, in London.