The NFL informed teams this week that a workout will be held for former San Francisco 49ers quarterback Colin Kaepernick, who started kneeling during the national anthem before games in 2016 in protest of police brutality against black Americans, prompting both skepticism and cautious optimism from his supporters.

Of the tens of thousands of reactions to the workout on Twitter, according to social media intelligence firm Storyful, many on the left saw it as a PR stunt by the NFL, while many on the right saw it as an opportunity to show that Kaepernick's absence from the league has been due to poor playing ability, not controversy.

Mark Geragos, Kaepernick's attorney, told "Good Morning America" Friday, "The whole thing seems to me to be a manufactured stunt, for lack of a better term."

The NFL said in a statement to "Good Morning America," "We are looking forward to Saturday's workout with Colin."

Despite leading the 49ers to the 2013 Super Bowl, Kaepernick has not been signed to a team since the end of the 2016 regular season, when he opted out of his deal with the 49ers, becoming a free agent.

Kaepernick, who has been vocal about his desire to return to the NFL, filed a grievance against league owners in 2017, alleging they colluded to ensure he remains unsigned. The lawsuit was settled in February.

I'm just getting word from my representatives that the NFL league office reached out to them about a workout in Atlanta on Saturday. I've been in shape and ready for this for 3 years, can't wait to see the head coaches and GMs on Saturday.

The NFL has faced ongoing criticism and boycotts for its handling of Kaepernick's protest and his continued absence. In an apparent response, the league launched a social change initiative this January, but many social justice activists view it as disingenuous.

“No matter what happens at this workout, it does not change the systemic discrimination and corporate greed that exists across American sports," Rashad Robinson, President of Color Of Change, said in a statement to ABC News. "From the NFL, which have made it clear that they prioritize profits over justice, to the NCAA, which has exploited black athletes for decades with outdated 'amateurism' rules, the leaders of these leagues are constantly attempting to strip black athletes of their voice and power while profiting off of their talents. Everyone knows that Colin deserves a job, now we must continue to hold corporations accountable to ensure this blackballing never happens again.”

This workout could mean teams are willing to pick him up to start playing professionally again. But suspicion has grown as reports proliferate about apparently less-than-ideal conditions, including the workout being held on a Saturday, when scouts are typically at college games.

"Is this one beginning of a way to start to change those perceptions of the NFL? Yes, it probably is. You've got to start somewhere," Daniel Binns, CEO of Interbrand NY, a global consulting firm, told ABC News. "It takes a long time to gain trust in a brand, and you can lose that trust very quickly, and rebuilding it takes time and commitment." 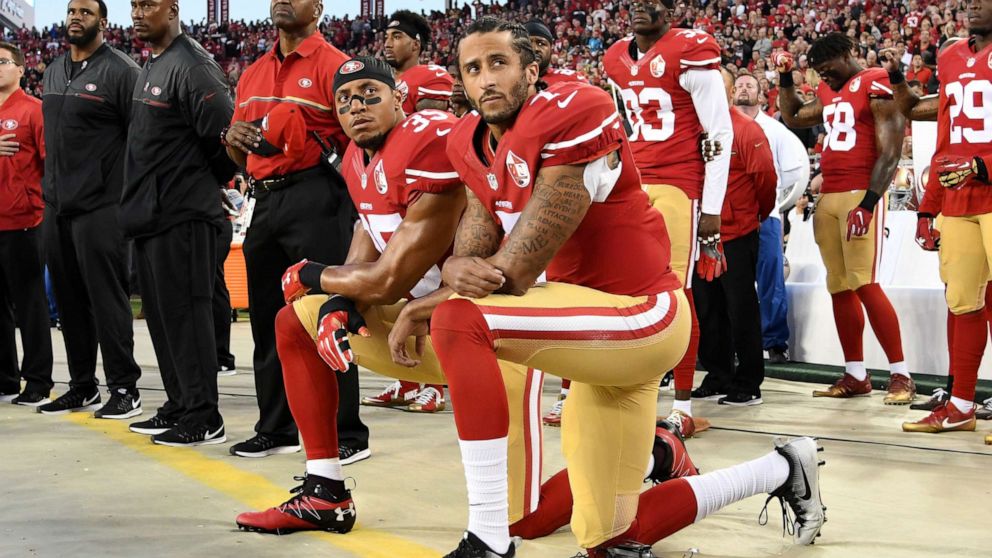 Thearon W. Henderson/Getty Images, FILE
In this Sept. 12, 2016, file photo, Colin Kaepernick #7 and Eric Reid #35 of the San Francisco 49ers kneel in protest during the national anthem prior to playing the Los Angeles Rams in their NFL game at Levi's Stadium in Santa Clara, Calif.

Binns said changing perceptions requires authenticity, and that comes from changes internally, including setting values within a company. Tina McCorkindale, president and CEO of the Institute for Public Relations, thinks the public is seeing authentic changes from NFL Commissioner Roger Goodell, and that this isn't a PR stunt so much as it is him acting without consulting much beforehand with advisers.

"I think a lot of the decisions have stemmed from him," she told ABC News, adding, "I just think he thinks it's the right thing to do and the right time to do this."

McCorkindale thinks Goodell has been moved by conversations, including with Jay-Z, who joined in partnership with the NFL and who supports Kaepernick, along with changing public opinions.

Acknowledging that the NFL is in a difficult position, Binns said, "They are living in a world where the customer and cultural changes are happening very fast, and they are struggling to remain relevant by responding to that, and obviously what they're trying to do with this is address it."

ABC News Sports Analyst and USA Today sports columnist Christine Brennan said Kaepernick's NFL workout, to which about a dozen teams have now committed, is "strange" and "out of the blue," but she believes the outcome is arguably more significant than the workout itself. 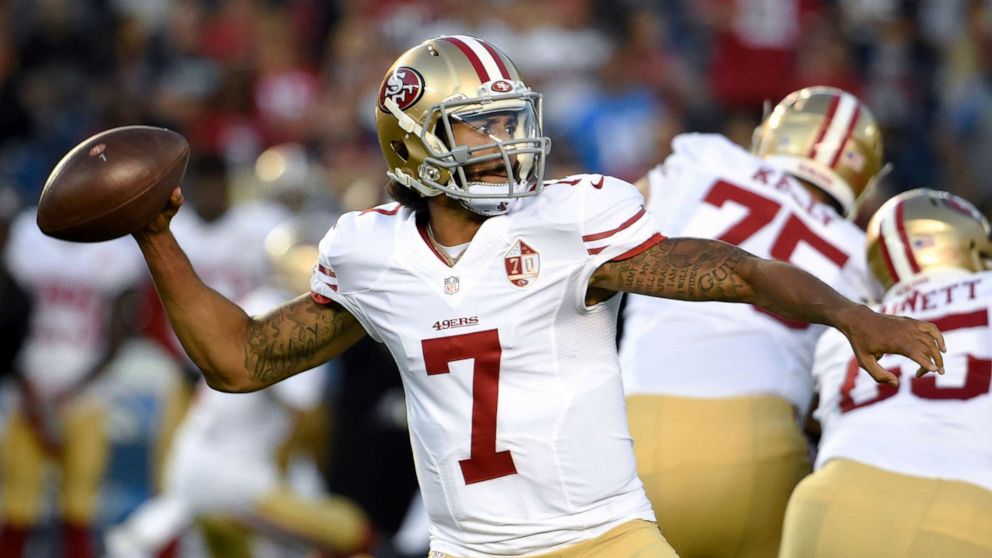 Denis Poroy/AP, FILE
In this Sept. 1, 2016, file photo, San Francisco 49ers quarterback Colin Kaepernick passes against the San Diego Chargers during the first half of an NFL preseason football game in San Diego.

Kenneth Cohen, Hintz Secretarial Scholar and curator at the Smithsonian National Museum of American History, said that the outcome of the workout would "skew the perception" of the debate.

"If he gets picked up, people will look at this moment and are likely to say that the league was pressured in this way and responded by creating an opportunity and that all along his abilities were of a level where he should have been picked up," he told ABC News, adding that if he doesn't get picked up, the workout could "be looked at as a PR stunt."

(MORE: Jay-Z faces backlash over NFL partnership as Kaepernick remains out of the league)

Carolina Panthers player Eric Reid, who was with the 49ers in 2016, and the first to join Kaepernick in kneeling, was skeptical of the NFL's intentions with the workout.

I asked Eric Reid if upcoming Colin Kaepernick workout is progress. This was his reply: pic.twitter.com/pDFs8gG4gk

"I'll quote Malcolm X," he said, "'if you stick a knife nine inches in my back and pull it out six, it's not progress, that's still a knife in my back,' so we'll see what happens."