The images of empty stadiums as athletes perform near-impossible feats at the Olympic Games in Tokyo is another sobering reminder of the toll the COVID-19 pandemic has taken on the world.

MORE: How the ban on spectators at Tokyo Olympics could impact athlete performance

The absence of thousands of screaming revelers could have an impact on athlete's performance -- even Simone Biles cited the empty arena as an added stressor after announcing she would drop out of the USA Women's gymnastics team final. The host country is missing out on millions of dollars of tourist revenue. 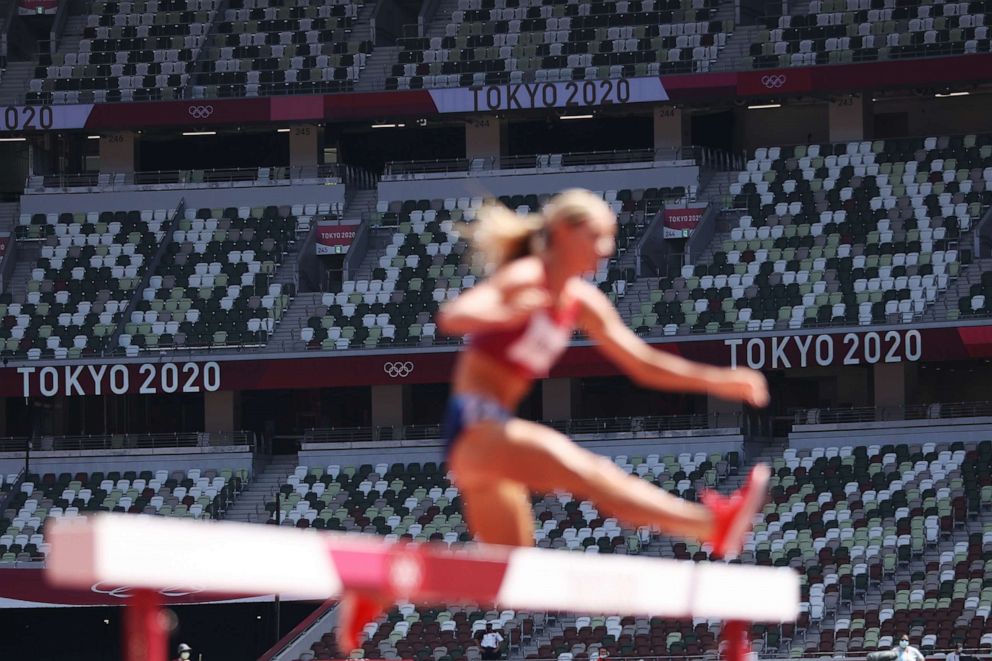 Patrick Smith/Getty Images
TOKYO, JAPAN - AUGUST 01: Seats remain empty as Emma Coburn of Team United States competes in round one of the Women's 3000m Steeplechase heats on day nine of the Tokyo 2020 Olympic Games at Olympic Stadium on August 01, 2021 in Tokyo, Japan.

But is there a silver lining to the unprecedented move to ban spectators -- a move Japan enacted to keep the spread of the virus at bay? Is there at least an environmental upside to eliminating such a historically large component from the weekslong event?

According to the experts, the short answer is "no."

The impact of no spectators traveling to the Games will likely be "relatively minimal," Jason Smerdon, a climate scientist for Columbia University's Lamont Doherty Earth Observatory, told ABC News.

"I trust it will ultimately amount to many tons of emissions avoided, but keep in mind that the disruptions to travel due to COVID (a much larger perturbation to global travel) only contributed to an overall reduction in 2020 emissions of about 7% below 2019 levels," Smerdon said. 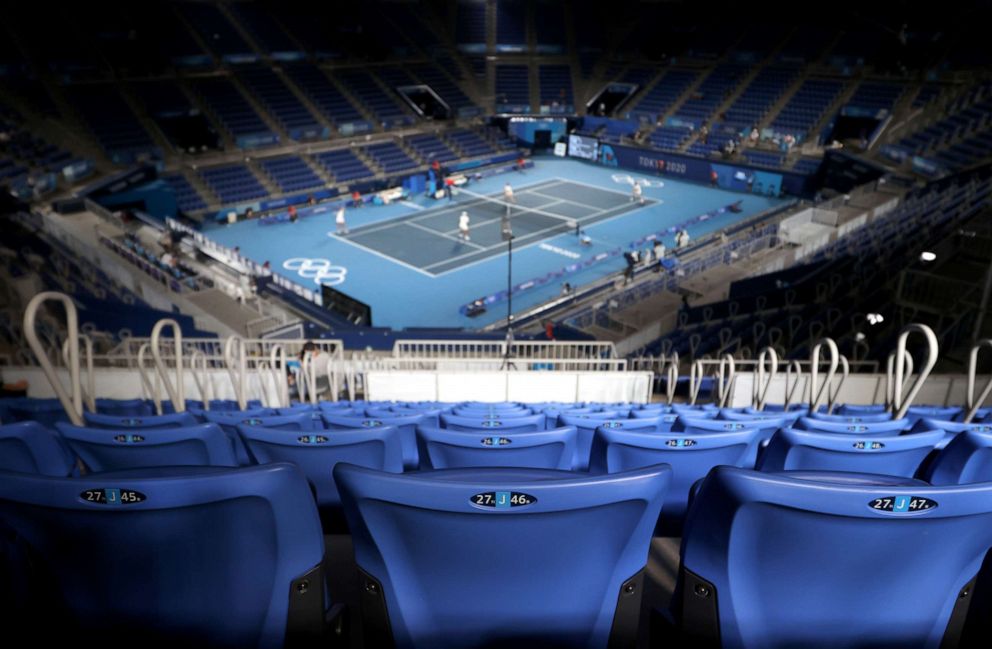 Dan Mullan/Getty Images
TOKYO, JAPAN - AUGUST 01: A near empty stadium is witness as Andrey Rublev of Team ROC and Anastasia Pavlyuchenkova of Team ROC play Aslan Karatsev of Team ROC and Elena Vesnina of Team ROC in their Mixed Doubles Gold Medal match on day nine of the Tokyo 2020 Olympic Games at Ariake Tennis Park on August 01, 2021 in Tokyo, Japan.

Globally, the aviation industry only contributed about 2.4% of greenhouse gas emissions in 2018, according to the Environmental and Energy Study Institute. When you factor in non-carbon dioxide effects, such as warming induced by aircraft contrails and other pollutants, the total contribution of commercial aviation increases to approximately 5% of world’s climate-warming problem -- still a relatively small amount.

And of the billions of international flights occurring every year, just a small fraction of them are going to the Olympics, Phillip Duffy, climate scientist and president and executive director of the Woodwell Climate Research Center, told ABC News.

MORE: Why green hydrogen is the renewable energy source to watch in 2021

However, air travel at "fairly big events," such as the Olympics or festivals such as South by Southwest, is responsible for the majority of the emissions, Julio Friedmann, senior research scholar at the Center on Global Energy Policy at Columbia University, told ABC News. Without the air travel, the event itself is likely responsible for somewhere along the lines of 35,000 tons of carbon dioxide emissions, but that number can increase to as high as a few 100,000 tons once the flying is accounted for, he said. 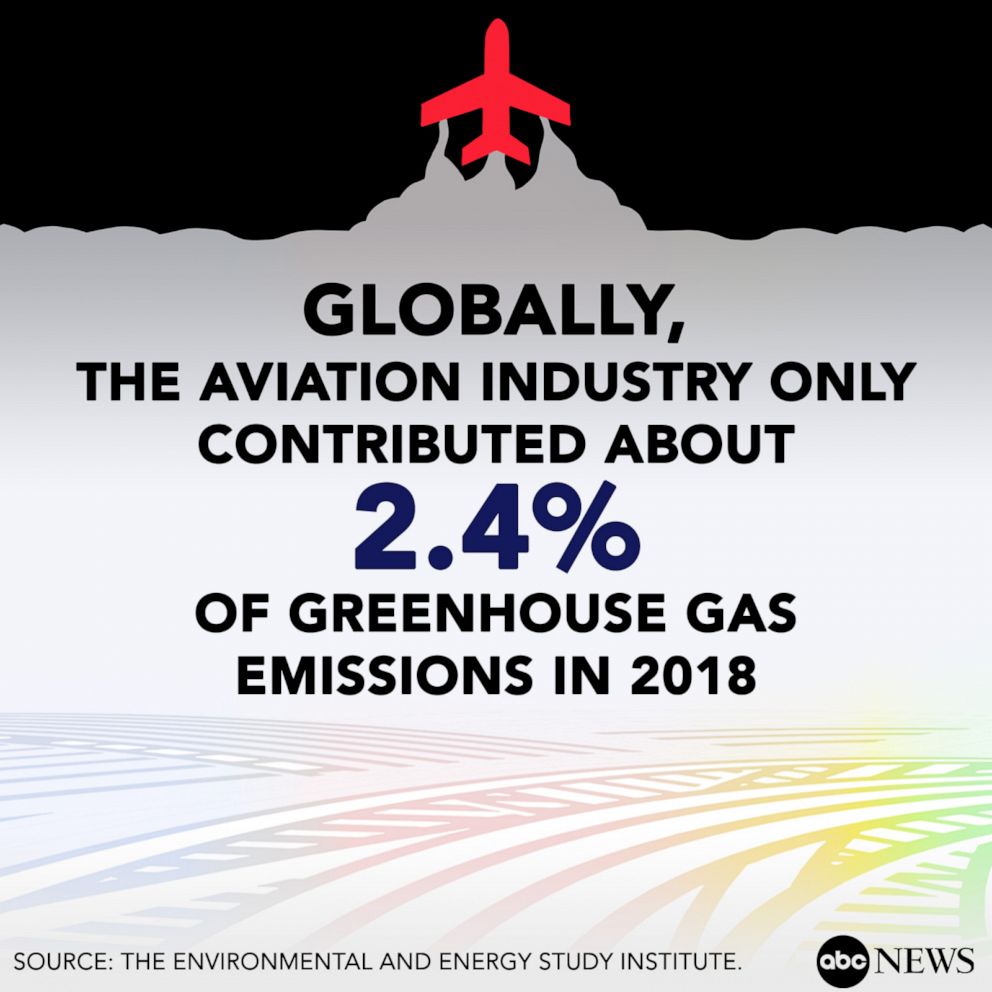 ABC News Photo Illustration
Globally, the aviation industry only contributed about 2.4% of greenhouse gas emissions in 2018, according to the Environmental and Energy Study Institute.

Friedmann estimated that if all of the travel to similar events were zeroed out, it would save maybe 100 million tons of carbon dioxide, while 51 billion tons of greenhouse gases are emitted every year.

Friedmann said there is a growing rhetoric surrounding climate change and the environment involving shame, such as shaming royals and celebrities for chartering private jets to fly around the world.

MORE: COVID-19 brought emissions way down in 2020, but what will happen when the pandemic is over?

"The idea that we can sort of shame our way virtuously into substantial emissions reduction by not attending events like this is bonkers, just doesn't make sense," he said.

What will really put a dent in emissions is systemic change and electing decision-makers who care about the issue as well as being open to new ideas, according to the experts.

"We have to be tolerant of new ideas and new solutions, we have to seek compromise that is essential to success," Friedmann said. "If we do not have it, we will not succeed. 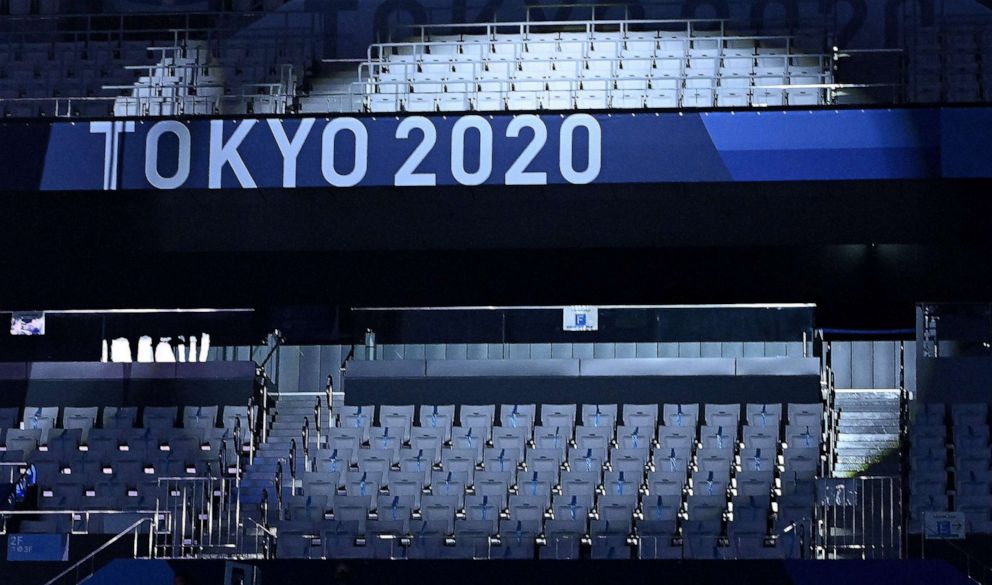 Attila Kisbenedek/AFP via Getty Images
A spotlight highlights empty seats in the stadium ahead of the women's 3m springboard diving final event during the Tokyo 2020 Olympic Games at the Tokyo Aquatics Centre in Tokyo on August 1, 2021.

Although the aviation industry accounts for such a small number of overall emissions, it will still be important to decarbonize in the future, Duffy said, adding that he believes overall business travel will remain much lower in the future due to new norms established during the pandemic.

"Everything counts, but decarbonizing is a much larger task than emissions associated with one event, even the Olympics," Smerdon said.