Lia Thomas, a transgender woman who generated controversy by competing on the women's swim team at University of Pennsylvania, said she plans to keep swimming, with an eye on the Olympics.

"I intend to keep swimming," Thomas told ABC News' Juju Chang in an interview that aired Tuesday on "Good Morning America." "It's been a goal of mine to swim at Olympic trials for a very long time, and I would love to see that through."

Thomas, of Austin, Texas, won gold in the 500-yard freestyle at the NCAA championships in March, becoming the first female swimmer in Penn's history to win an individual national title, according to the university.

After competing for three years on Penn's men's swimming team, Thomas also made history in that race as the first transgender athlete to win an NCAA division title in any sport.

"It was a goal of mine to be at that meet and do as well as I could," said Thomas, who competed in three races at the championships. "So to be able to fulfill that personal goal and be at that meet as well as the sort of fulfillment of competing as my authentic self was just such an amazing experience, to have these things that I've been working towards for so long all come together." 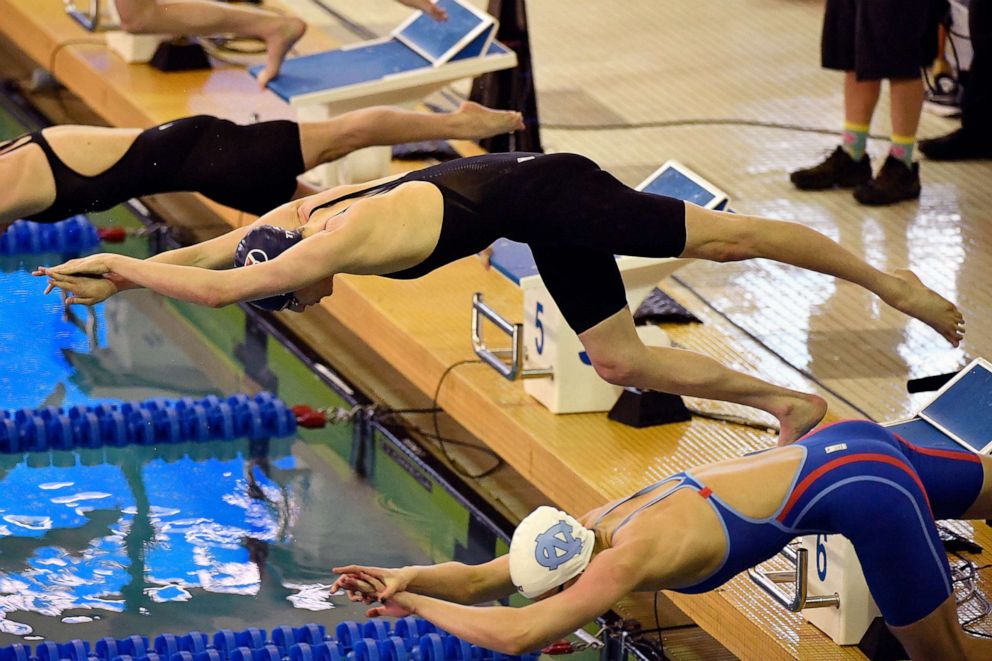 Mike Comer/NCAA Photos via Getty Images, FILE
Lia Thomas of the University of Pennsylvania Quakers dives in at the start of the 100 Yard Freestyle during the Division I Women's Swimming & Diving Championships held at the McAuley Aquatic Center, March 19, 2022, in Atlanta.

Assigned male at birth, Thomas said she fell in love with swimming at age 4, but as she grew older she said she felt increasingly disconnected to her body, explaining, "I didn't feel like I was a boy."

"When I was a young kid, my mom always would describe me as a very happy kid," said Thomas. "And then sort of in middle school and high school, as I, like, went through puberty, that shifted a little bit, with gender dysphoria from being trans, but I didn't have, I didn't yet know or have the language to describe that."

After high school, Thomas earned a spot on the men's swimming team at Penn, her dream school.

But by her sophomore year in college, Thomas said her gender dysphoria plunged her into a deep depression, and she struggled with suicidal thoughts.

"I was barely going to classes. I could really barely get out of bed," she recalled. "I said, 'I can't live like this anymore. I want to live again. I want to be able to do things I enjoy.'"

Thomas said a fear of not being able to compete in the sport she loved kept her from transitioning initially.

By 2019 though, at the end of her sophomore year, Thomas said she began hormone replacement therapy, a "gender-affirming treatment [that] uses female hormones to create a more feminine appearance," according to The Cleveland Clinic.

"The mental and emotional changes actually happened very quickly," said Thomas. "I was feeling a lot better mentally. I was less depressed."

She continued, "And I lost muscle mass and I became a lot weaker and a lot, a lot slower in the water."

Thomas began swimming on Penn's women's swimming team at the start of her senior year, following NCAA guidelines that athletes must complete one year of hormone replacement therapy to change gender categories.

The scrutiny over Thomas grew the more she achieved success in the pool. 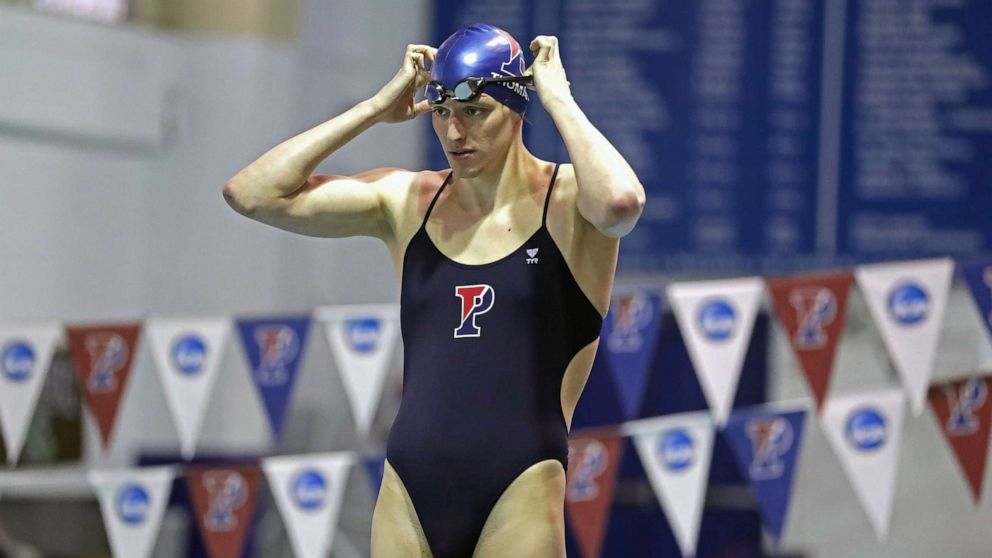 Hunter Martin/Getty Images, FILE
Lia Thomas of the Pennsylvania Quakers during a meet against the Brown Bears at Sheerr Pool on the campus of the University of Pennsylvania, Nov. 16, 2019 in Philadelphia.

In response to critics who say Thomas transitioned in order to win more swimming medals, she reiterated that is not the case.

"Trans people don't transition for athletics," she said. "We transition to be happy and authentic and our true selves. Transitioning to get an advantage is not something that ever factors into our decisions."

In January, the NCAA updated its transgender athlete eligibility guidelines to say that each sport's national governing body could make their own rules. Previously, the NCAA had a uniform hormone therapy requirement across all sports, according to ESPN. USA Swimming, the sport's national governing body, has used a review panel to make individual determinations on a case-by-case basis since 2018.

The NCAA then announced it would wait until next season to enforce the new guidelines, which cleared the way for Thomas to compete as a female at the 2022 NCAA championships.

In February, just one month after the NCAA's announcement, 16 of her Penn teammates and some of their parents signed an anonymous letter arguing she posed a threat to women's sports. The letter stated that while the signers supported Thomas' right to transition, they thought it was unfair that she compete against cisgender women.

"You can't go halfway and be, like, 'I support trans women and trans people, but only to a certain point,'" Thomas said in response to her teammates' letters. "Where if you support trans women as women they've met all the NCAA requirements, then I don't know if you can really say something like that."

She continued, "Trans women are not a threat to women's sports."

While the science on transgender athletes is new and evolving, some medical experts say the effect of higher testosterone during male puberty may never be fully erased.

Dr. Michael Joyner of the Mayo Clinic told ABC News that with hormone therapy, there are physical aspects of men that may remain among trans women. For a swimmer like Lia Thomas, those physical aspects may be “activated” due to the sport.

Despite existing evidence of what happens to a trans person’s body after hormone therapy, Thomas said she views herself in the context of other female athletes, all of whom vary in size, strength and ability.

"I'm not a medical expert, but there's a lot of variation among cis female athletes," she said. "There are cis women who are very tall and very muscular and have more testosterone than another cis woman, and should that then also disqualify them?" 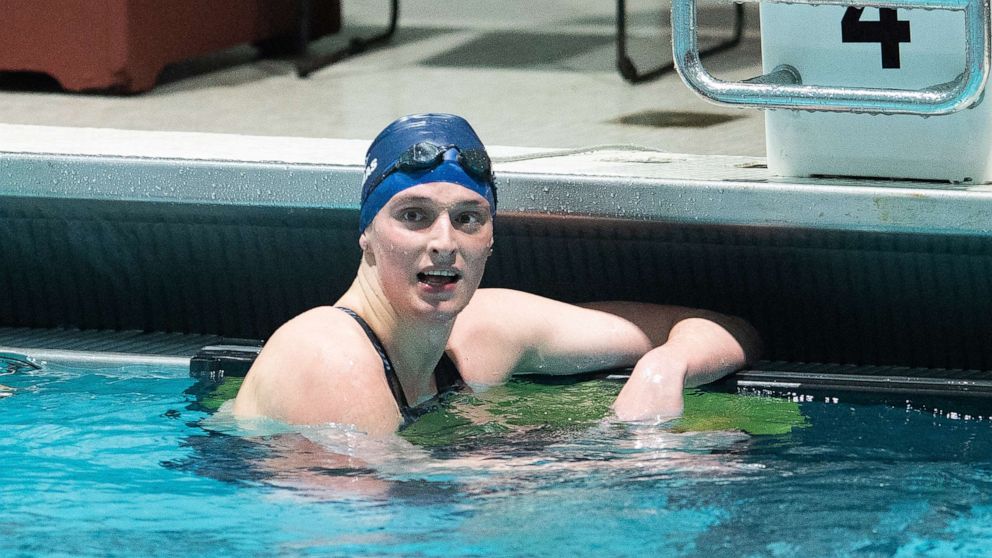 The controversy surrounding Thomas' collegiate swimming career coincided with more than a dozen states, including Oklahoma, Arizona and Florida, instituting bans to prevent trans students from participating in sports that align with their gender identity.

Research from the Centers for Disease Control and Prevention found that trans youth often report feeling isolated and excluded in academic environments. That discrimination puts them at increased risk for poor mental health, suicide, substance abuse, violence and other health risks.

Thomas said she does not see it as an acceptable option to prevent transgender people from competing in sports, or to limit them to competing only against each other or themselves, like in a separate swimming lane, for example.

"In addition to not allowing the full athletic experience, that's incredibly othering to trans people who already face immense discrimination in other parts of our lives," she said. "To then again have this discrimination in sports and be, like, 'Oh, OK, you can swim, but only over there, like in that lane.' It's very othering."

Speaking of her own experience of waiting longer to transition because she wanted to compete in swimming, Thomas added, "I don't think trans people should have to make that decision. It is something that caused me a lot of personal stress and I don't want other trans people to have to face that choice."

Thomas graduated from Penn in May and has said she plans to attend law school, in addition to continuing to compete in hopes of reaching the 2024 U.S. Olympic Team Trials.

The highlight of her college graduation, according to Thomas, was hearing her name called as Lia Thomas.

"When I actually got to walk across the stage and hear them say my name and walk across, it was very cool," she said, describing her emotion in that moment as "pure joy."