As Russia continues to raise the stakes in its war against Ukraine, Ukraine's first lady Olena Zelenska said she is focused on providing humanitarian aid to the people in her country.

Zelenska has launched her own foundation, the Olena Zelenska Foundation, to bring education, medicine and humanitarian aid to Ukrainians.

"Our main goal is to help as many people as possible to return home," Zelenska told ABC News' Amy Robach in an exclusive interview that aired Monday on "Good Morning America." "For them to be able to return, we need to restore hospitals, schools ... we need to rebuild their homes."

Robach spoke to Zelenska during the first lady's trip to New York City for the United Nations General Assembly, during which Zelenska launched the foundation at an event attended by former U.S. Secretary of State Hillary Clinton, as well as actors Matt Damon, Jimmy Fallon and Brooke Shields.

Zelenska's husband President Volodymyr Zelensky also delivered a video address at the event, remotely from Kyiv. "We are fighting for freedom and protecting our people," he said. "We are doing everything possible to engage our friends -- friends of freedom -- worldwide who are willing to contribute to our struggle."

According to its website, the foundation will focus on rebuilding schools and medical centers in Ukraine, so that every Ukrainian "feels physically and mentally healthy, protected, and able to exercise their right to education, work, and build a future in Ukraine."

Zelenska launched the foundation at a time of escalating tension in Russia's months-long war with Ukraine.

Earlier this month, Russian President Vladimir Putin announced a mobilization of reservists, which is expected to call up as many as 300,000 additional troops.

Zelenska, who spoke with Robach through a translator, said the developments are unsettling, describing the current time as not an "easy period" for the people of Ukraine.

"When the whole world wants this war to be over, they continue to recruit soldiers for their army," said Zelenska, referring to Russia. "Of course, we are concerned about this. We are worried and this is a bad sign for the whole world." 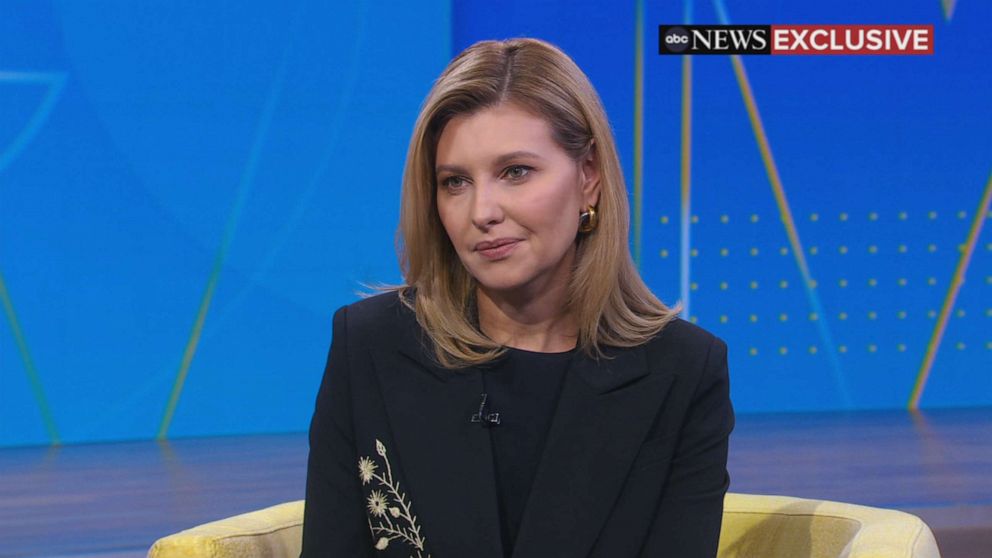 Zelenska's husband, President Volodymyr Zelensky, warned last week in a recorded address to the U.N. General Assembly that Moscow was trying to wait his fighters out.

Zelenska said she believes Ukrainians will continue to persevere in the face of conflict.

"The main difference between our army and the Russian army is that we really know what we are fighting for," she said.

Zelenska also spoke to Robach about the U.N.'s recent finding that wars crimes have been committed in Ukraine by Russian troops.

A U.N.-appointed panel of independent legal experts reported that Russian soldiers have "raped, tortured, and unlawfully confined" children in Ukraine, among other crimes.

MORE: Ukrainian first lady sits down for exclusive interview with ABC News: 'Don't get used to our pain'
Editor's Picks

The report followed an announcement by U.S. Secretary of State Antony Blinken in March that Russian forces have committed war crimes in the country.

Zelenska said she was not surprised by the U.N. report but is glad the crimes are internationally recognized now.

"On the one hand, it's horrible news, but it's the news that we knew about already," she said. "On the other hand, it's great news that the whole world can finally see that this is a heinous crime, that this war is against humanity and humankind."

Zelenska continued, "Now Ukrainian efforts at the international level are focused on creating an international tribunal for all responsible for crimes that still unfortunately continue to occur in Ukraine during this war."

As Zelenska works to help Ukrainians recover from the devastating effects of the war, she said support from the United States is "crucial."

"It's not war between Ukraine and Russia. It's war for values of all the world. A war for freedom, for human rights, for all that we love, all of the people of the world," she said. "And that's exactly what Ukrainians are fighting for now. So don't stop your support. It's very important for us."