After a summer plagued with grief, anxiety and anger, Uvalde found an escape, celebrating the high school's first home football game of the season. 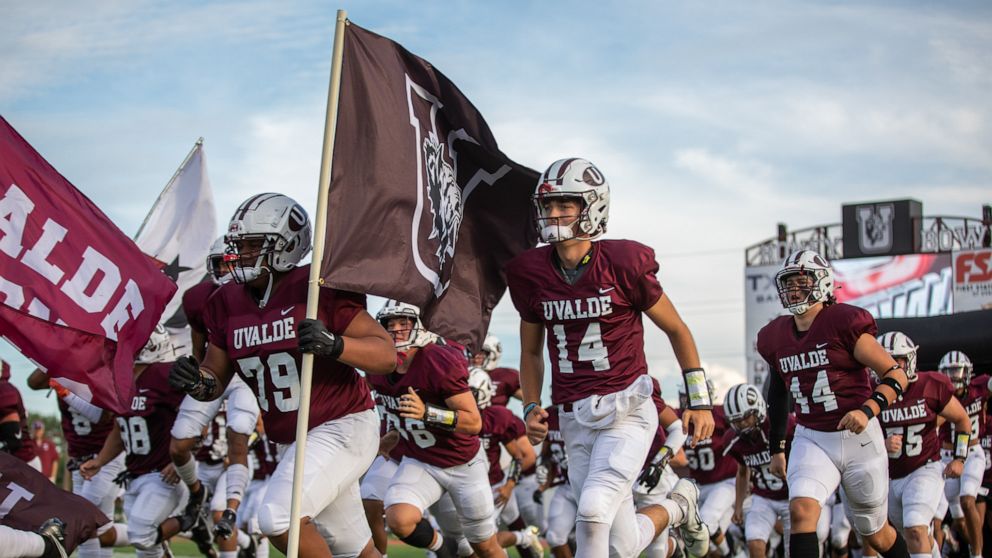 After a close, dramatic game, it was a storybook victory for Uvalde, winning 34-28. 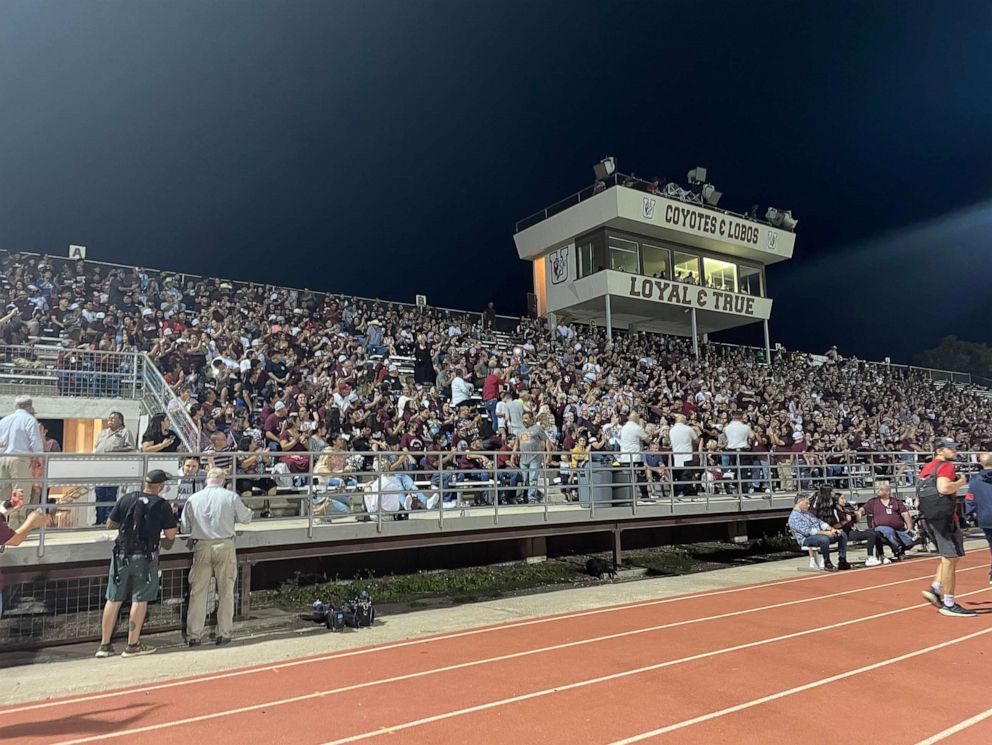 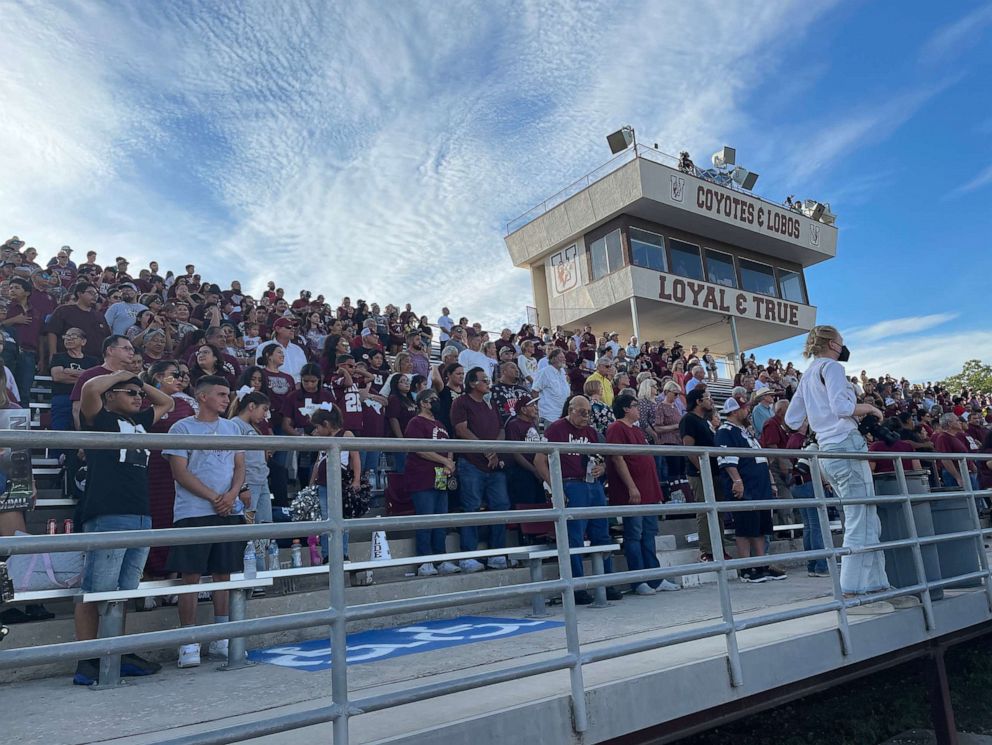 Uvalde's stadium is just 2.4 miles from Robb Elementary School, where 19 elementary students and two teachers were killed on May 24. 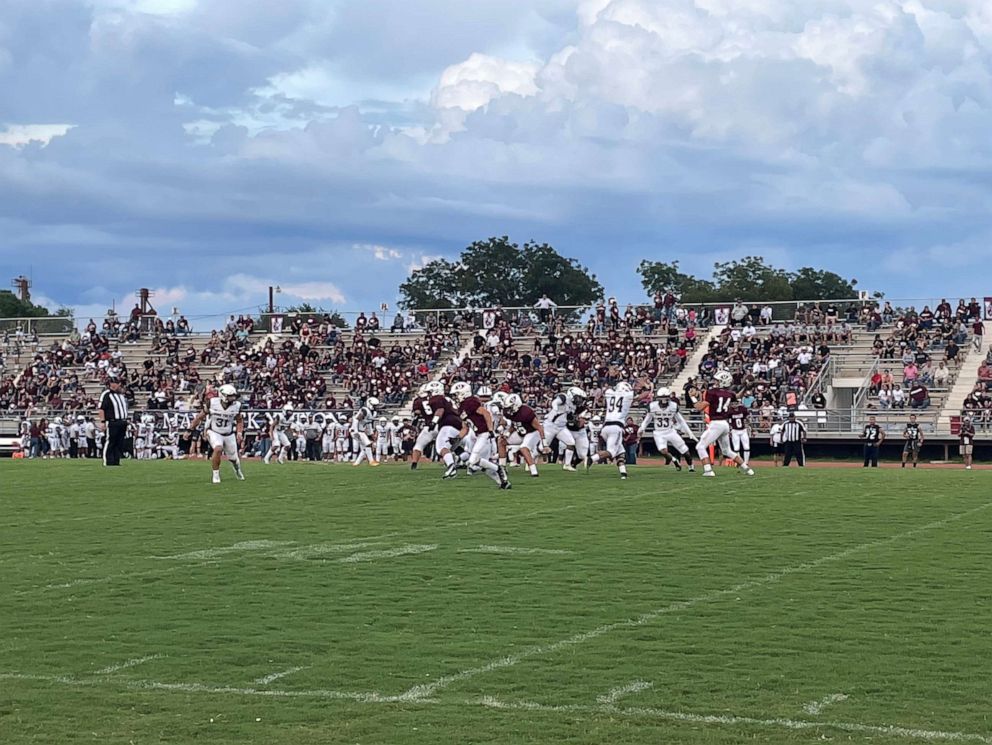 Uvalde held a prayer and 21 seconds of silence before the game, commemorating the 21 victims killed.

Uvalde cheerleader Andrea Perez, a junior, spent hours making a megaphone with her mom to honor the Robb victims. The football players have helmet stickers, she said, so she wanted her own way to pay her respects. 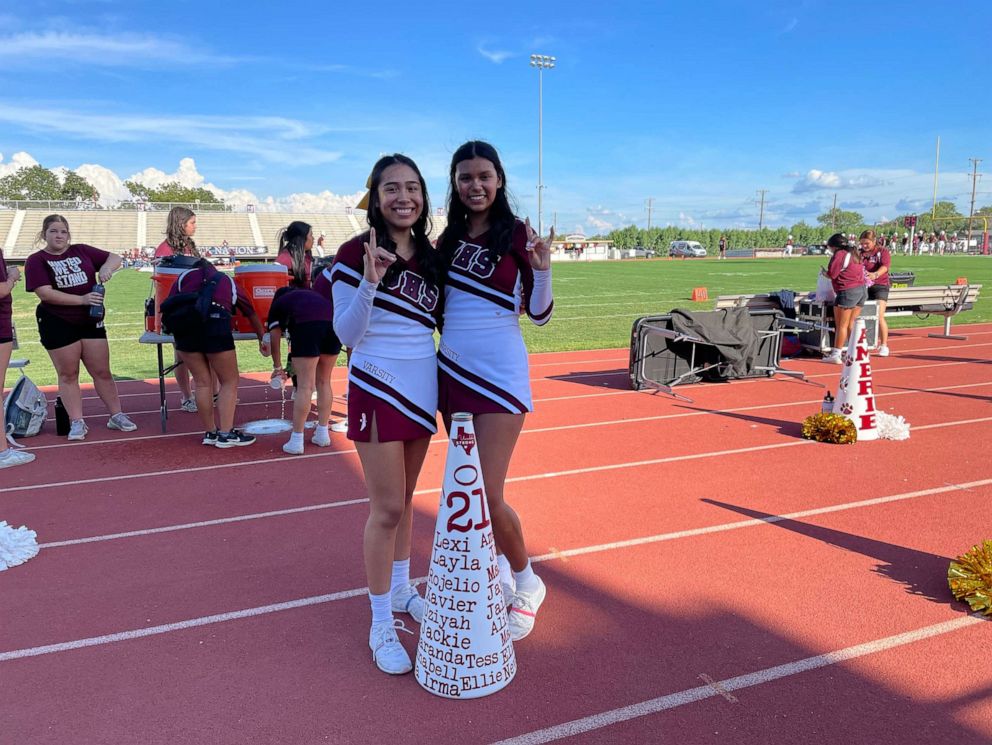 Senior Uvalde linebacker Justyn Rendon was selected by his coaches and peers for the honor of wearing the No. 21 jersey this season.

"I automatically started crying," his mom, Venessa Rendon, said when she learned the news. "I was proud. It was a very humbling moment."

Justyn Rendon said nearly everyone in town was impacted by the massacre, including his own family. His youngest brother was at Robb that day and survived.

"I was devastated, I couldn't get here fast enough. All the 'what ifs?' started playing through my mind," said his father, San Antonio police officer Eluterio Rendon.

MORE: 'Take responsibility': Experts push back on Arredondo's response to his termination

At practice "everybody didn't have to feel the sadness and the sorrow. They just were able to feel the comfort of the family that we have," the 18-year-old said.

As the team gathered for a pre-game dinner Thursday night, they were greeted by surprise visitors: Houston Texans coach Lovie Smith and Texans linebackers Christian Kirksey and Kamu Grugier-Hill.

Players from the ⁦@HoustonTexans⁩ here in Uvalde to surprise the football team ahead of their first home game, an event bringing the whole community together pic.twitter.com/KaTFlQCOq3

A night to remember for Uvalde's football team- a surprise visit from the ⁦@HoustonTexans⁩. Much more to come on ABC pic.twitter.com/rlMYEm14Lm

"Whenever you have the opportunity to be of help, to be of inspiration, or just to be a person that can get, you know, things of these young men's minds. You can talk ball with, or talk life with, you just want to be there," Texans linebacker Christian Kirksey told ABC News. "I think that we have a job not just playing football, but to be role models and to be a helping hand."

"I think it's awesome," Uvalde coach Wade Miller said of the NFL visit. "It makes us feel the love that we're getting from around the world and especially the state of Texas. And to have those guys here and keeping up with us, makes our kids feel really special." 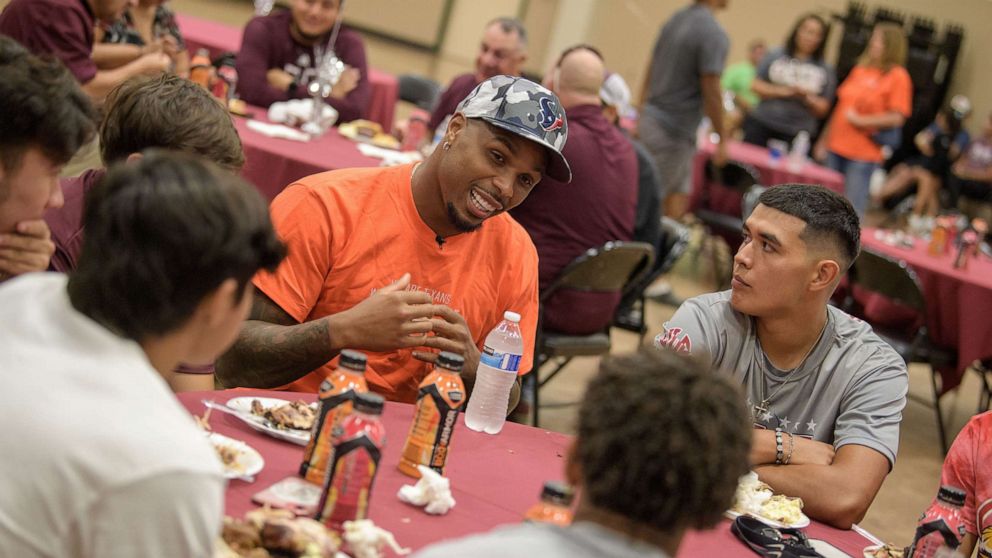 The surprises kept coming on "Good Morning America" Friday. The Texans gifted Uvalde with new uniforms and equipment for the season, and will honor the team with "Uvalde strong" stickers on their helmets at their first home game on Sept. 11.

"We'll always be in you corner, we'll always have your back," Kirksey said.

The Uvalde high school football team checks out their new cleats given to them by the @HoustonTexans. https://t.co/juXY67zRzo pic.twitter.com/gKmTvoK3OS

We stand with Uvalde. pic.twitter.com/UG8i3kz5je

The Texans also hosted a football clinic for the Uvalde community on Friday.

"The guys just enjoy giving back," Texans owner Cal McNair told ABC News. "All these guys have really embraced that as what they do and what they believe in." 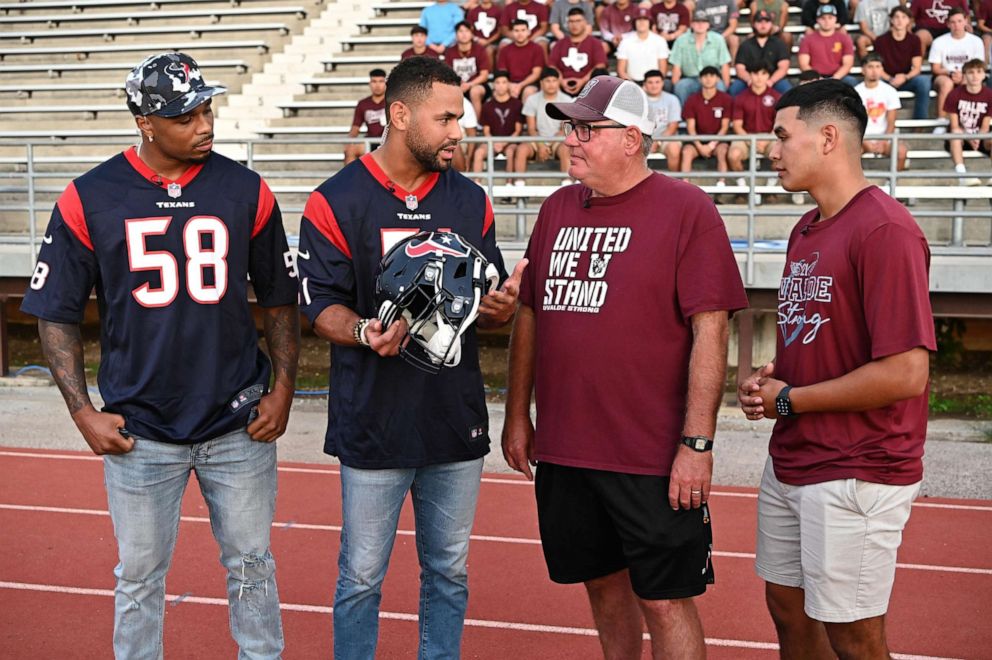 The special NFL visit was made possible by the Texans' athletic trainer, Roland Ramirez, who is a Uvalde native.

"It's been tough. Some really close friends have lost loves ones ... so it hits home for me," he said.

Ramirez said he's glad the Texans can offer encouragement to the high schoolers -- and he was especially excited to watch his alma mater take the field Friday night. 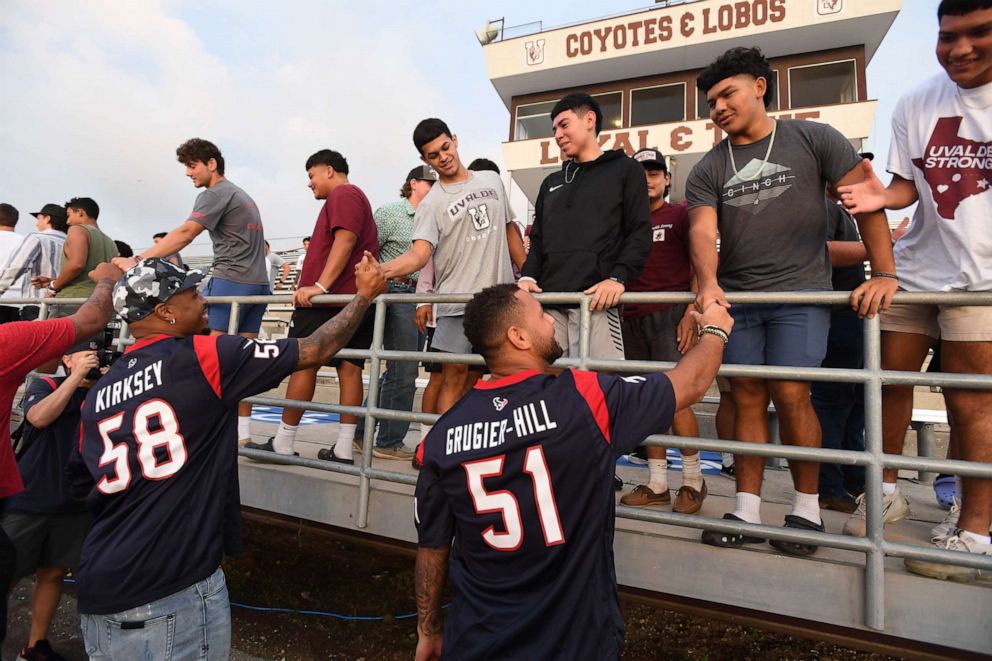 Uvalde football ended last season 2-8. But already this year is off to a new start.

The season began last Friday with an away game. Uvalde beat the Carrizo Springs Wildcats, scoring a total of 21 points -- a poignant and powerful reminder of the 21 lives lost.

"It was just a sign that the 21 angels are looking down at this community, and saying that they're here, that they're still present, and that they will remain present. So that was a pretty, pretty special moment," Eluterio Rendon said.

Defensive end Jonathan Elizondo, 17, said the tragedy has brought the team together and that they're mentally stronger now. 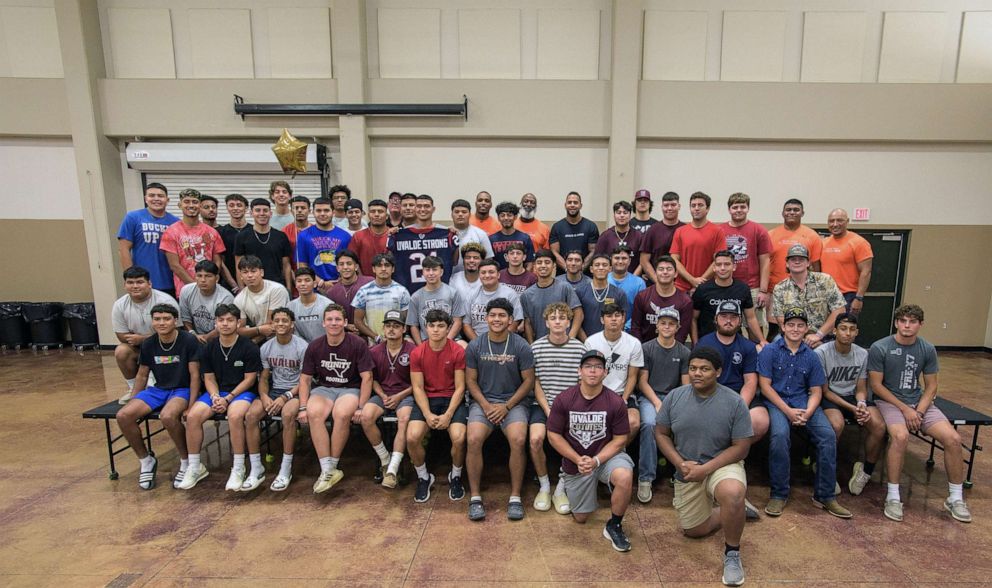 Elizondo transferred to Uvalde in the wake of the shooting to lend support to his family. He has cousins who attended Robb.

"I just don't want them to see this as, like, a tragic town, you know? I want there to be positivity again," he said. 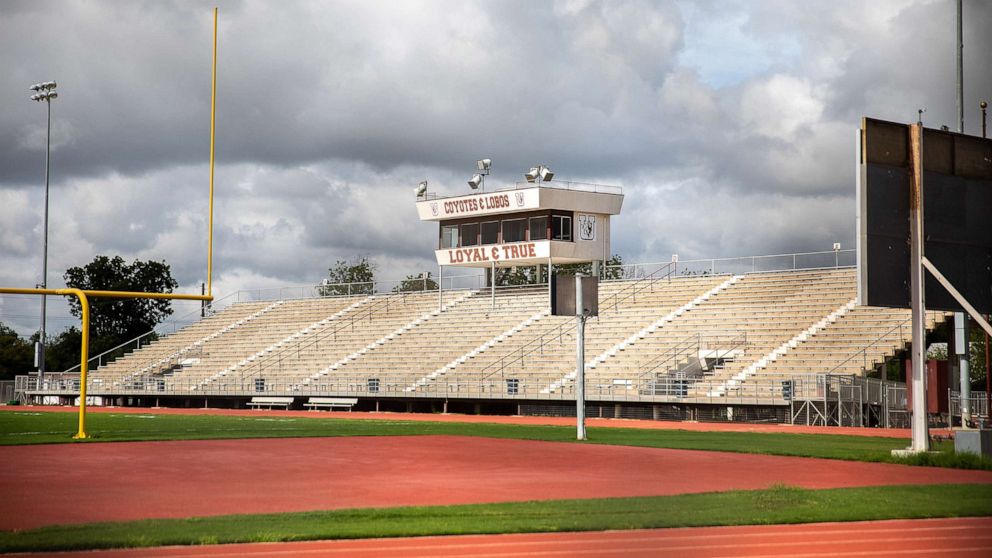 Football "brings everybody together" in Uvalde, and Justyn Rendon said he's excited to "bring the joy back to this town."

"It's gonna mean a lot more this season. ... It's gonna be very emotional, very exciting," he said. "And hopefully those little kids get to come out and watch us win. And that they don't have to feel like scared, or have to be sad, but they get to feel the joy of being around their friends, their families."

"This team means a lot to me," added 16-year-old quarterback Brodie Carnes.

"Our community is kinda down ... we're gonna go out there and play for them," he said.

"It took us a while to be able to smile again without feeling guilty," Eluterio Rendon said. "I believe that football will hopefully bring the community out ... find a reason to smile, by enjoying watching our kids do what they love to do." 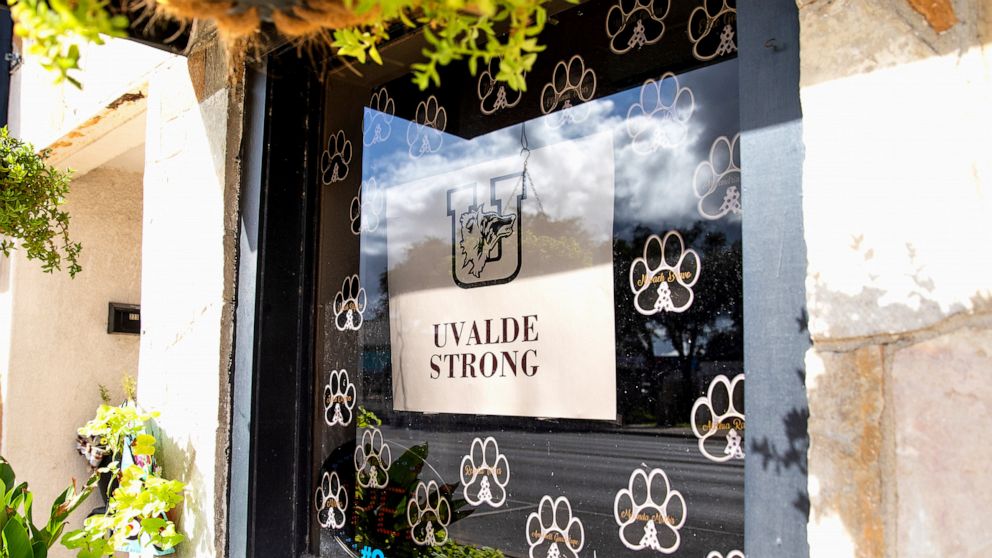 Kat Caulderwood/ABC News
A sign with the "Uvalde Strong" message and a Uvalde High School Coyote logo is displayed on the window of a building in downtown Uvalde, Texas, on Aug. 21, 2022.