Stacey Abrams, who captured national attention during her unsuccessful bid for Georgia governor in 2018, said she would be open to joining a 2020 ticket as the vice presidential nominee but will continue to make the fight against voter suppression her foremost mission.

“My responsibility in the primary is to ensure that we’re putting in place a fair fight structure that says in 2020, people will get to cast their ballots and have their voices counted,” she said in an interview with ABC News Correspondent Linsey Davis on "This Week".

Abrams said voter suppression is an issue that “has been baked into the DNA of America,” and one that has become more insidious over the last two decades, manifesting in subtle but still racialized ways, including voter I.D. laws, changes in registration requirements and varying absentee ballot procedures across communities.

“It’s no longer hoses and laws that say you cannot vote,” she said. “It is this insidious nature that says it’s race-neutral, that we’re just putting these laws in place for everyone. But we know that is has a disproportionate effect on the communities that have long been marginalized.”

Abrams maintained that her narrow loss in the election to Republican Brian Kemp was a result of voter suppression, including aggressive purging of voter rolls and denying the registration of new voters, long waits at polling places and malfunctioning voting machines. She has called Kemp, who as Georgia's then-secretary of state was the state’s top elections official, the “architect of voter suppression.” Kemp vehemently denied doing anything improper.

Abrams' election reform organization, Fair Fight Action, created just days after the Georgia election, has sued the state for having "grossly mismanaged" the 2018 election. In May, a federal judge ruled the case could go forward.

“I was hurt because there were thousands of people who wanted to be heard in this election who were denied that right, and no one should have the ability to strip away one of our fundamental constitutional opportunities,” she said. 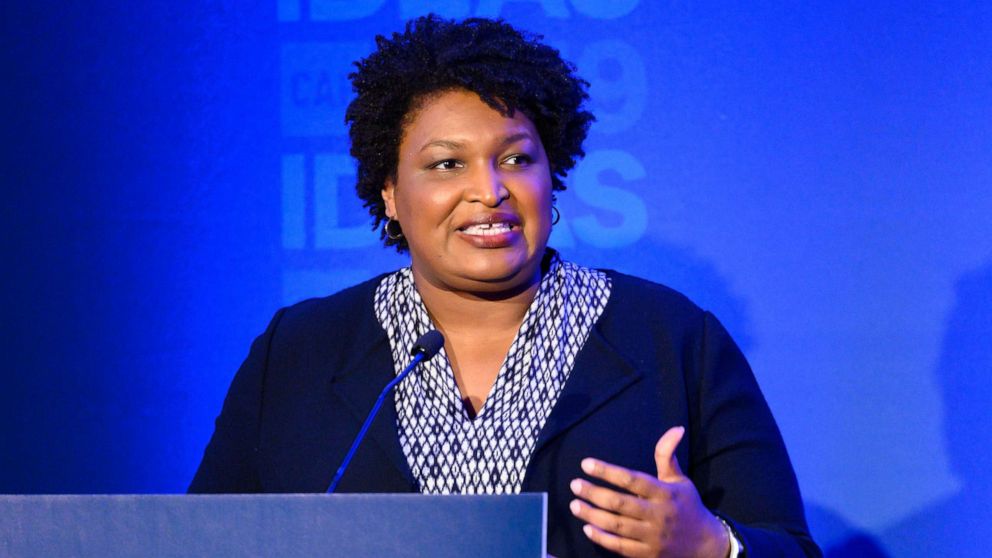 Abrams said where her campaign did win was in terms of voter engagement. Turnout among African American and Hispanic voters reached historic levels in 2018, and that, together with the fact that she was running to become the country’s first African American female governor, brought national attention to Georgia’s gubernatorial race. In February, she delivered the Democratic response to President Trump’s State of the Union address, in which she mentioned voter suppression.

“While I acknowledge the results of the 2018 election here in Georgia, I did not and we cannot accept efforts to undermine our right to vote,” she said in the response. “This is the next battle for our democracy, one where all eligible citizens can have their say about the vision we want for our country.”

A 2019 study by the National Bureau of Economic Research that analyzed the effects of voter I.D. laws found that they decrease neither voter turnout nor voter fraud, contrary to arguments made by politicians on both sides of the aisle. Previous research on voter suppression suggests that the magnitude of its impact on electoral outcomes is often minimal but that this impact tends to be more politically harmful for Democrats.

After months of speculation about her political future and whether she would join the crowded 2020 presidential field, Abrams announced on Wednesday she has decided against a run. Instead, Abrams launched a new voter protection initiative this week called Fair Fight 2020. It seeks to build the infrastructure she said is needed to ensure that the 2020 elections will be secure from foreign interference and voter suppression.

“If we do the work now, we will have an infrastructure in place, a network across this country that protects the right to vote,” she said on "This Week".

Abrams’s commitment to election integrity stems from her long history tackling voter suppression, beginning with her parents, who she said faced jail time as teenagers helping register African Americans to vote. They instilled in her the belief in the sanctity of voting.

“I was raised to believe that the right to vote is our most fundamental right and that you protect it, but more importantly, that you work for it,” she said. “For me, this is very personal.”

While many of the 2020 candidates don’t share the same personal devotion to election integrity, Abrams said they all have been responsive to calls for election reform and have the “bright ideas,” energy and passion necessary to secure the presidency. Her job, she said, is to use her experience and skills where they are most needed. And right now, she thinks where that is in the fight against voter suppression.

(MORE: Stacey Abrams still mulling a presidential run: '2020 is definitely on the table')

Abrams said the Trump administration is threatening this freedom and opportunity.

“In America, we can choose to vote or not vote,” she said. “Good candidates give you a reason to vote, but good government makes certain you can cast that vote. And what I take exception to is that we do not have people in government who are living up to their obligations. In fact, they are thwarting the will of the people by denying them access. And that's just wrong.”

But the candidates’ primary objective, Abrams argued, should not be beating Trump so much as it should be achieving “victory for our values” and restoring America’s standing domestically and internationally. She said any of the Democrats in the race now has the ability to do so.

“No matter who the nominee is, we are going to have a cogent message that shows how effective we can be and how ineffective and incompetent the current president is,” she said.

Although she said she is not actively pursuing the vice presidency, Abrams remains a prominent Democratic voice and something of a political celebrity. In suburban Atlanta, she often cannot walk down a street without someone wanting to shake her hand or even break out into song.

“It is an incredibly humbling thing that I don’t take credit for or take for granted,” Abrams said. “Hopefully, it’s a reflection that people know I am doing this for the right reasons, and they trust that I have their best interests at heart.”