It has been five years since the last words Eric Garner would ever utter was captured on his friend's cellphone video.

The incident on July 17, 2014, was one of the first to capture a seemingly minor interaction with police escalate out of control, and it served as a renewed catalyst for the national movement against police brutality.

From the deaths of Laquan McDonald in October 2014 to Cleveland's Tamir Rice in November of that same year, Garner's last words became a rallying cry each time another unarmed civilian was killed during a police-involved incident.

And it demonstrated the power of video to bear witness to controversial interactions with police.

A 5-year battle for justice

The death of Garner, a 43-year-old father of six, was ruled a homicide in August 2014 by Dr. Floriana Persechino, a senior medical examiner for New York City. In Persechino's report, she not only conducted a traditional autopsy, but used the cellphone video to determine that a "chokehold" triggered a fatal cascade of events, including an asthma attack, that led to Garner's death. 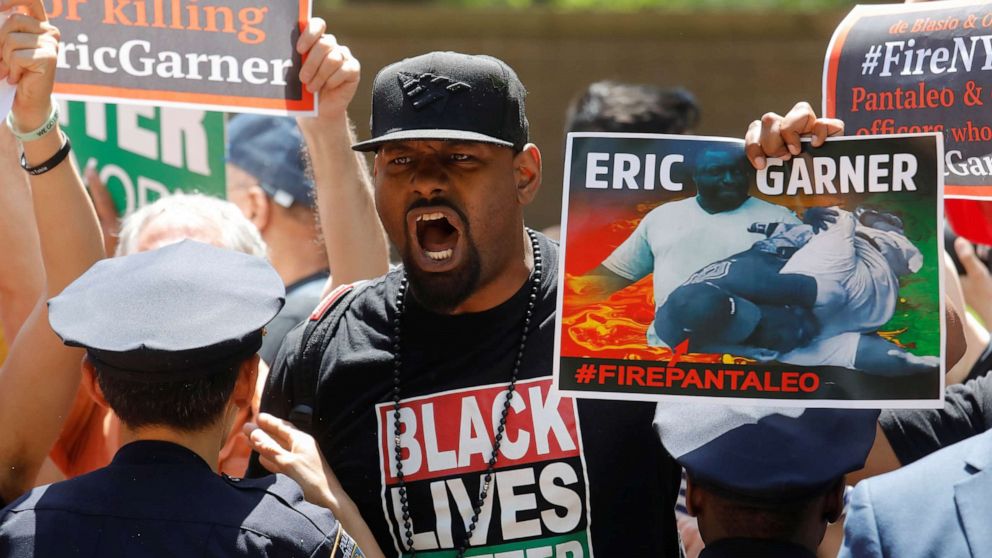 Shannon Stapleton/Reuters, FILE
Demonstrators protest during the disciplinary trial of police officer Daniel Pantaleo in relation to the death of Eric Garner at 1 Police Plaza in New York June 6, 2019.

(MORE: Eric Garner: How the NYPD Is Preparing for the Grand Jury Decision)

The NYPD's Internal Affairs Bureau launched its own investigation into Pantaleo's conduct. On Jan. 15, 2015, it concluded that a chokehold was administered and recommended charges, according to court documents. 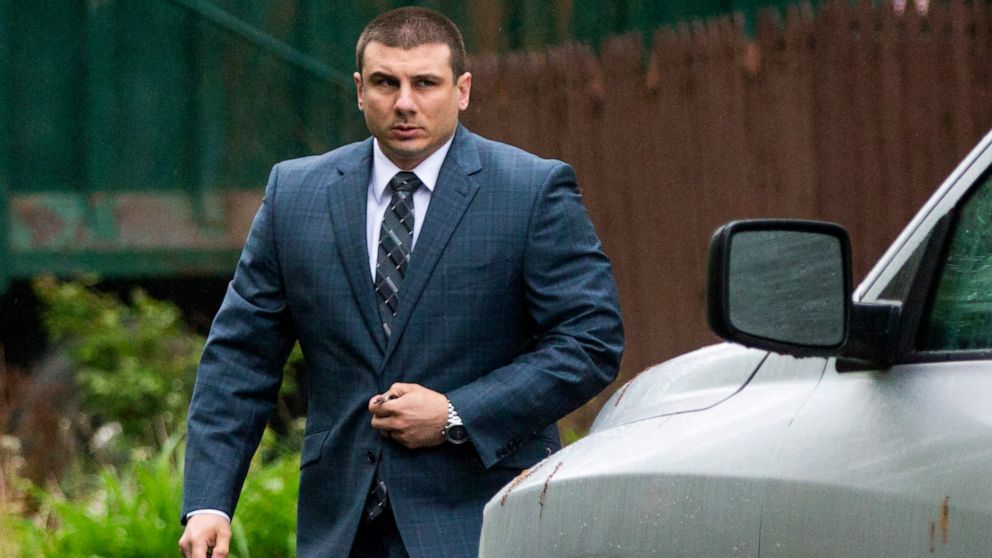 But the finding wasn't made public and the case languished for years while the NYPD awaited potential federal charges against Pantaleo.

A family fights for change and suffers another loss

Garner's eldest daughter and namesake, Erica, became an outspoken activist -- along with her grandmother, Gwen Carr -- calling for justice for her father. She also released a song called "This Ends Today," which includes audio from her father's confrontation with the officers.

Tragically, Erica Garner passed away in December 2017 after suffering a heart attack. She was 27. 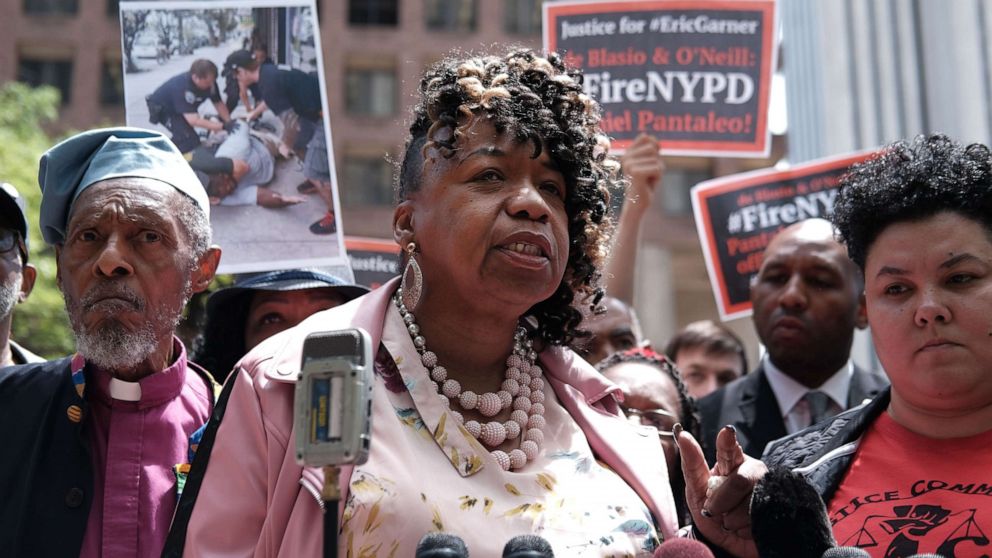 Spencer Platt/Getty Images, FILE
Gwen Carr, mother of Eric Garner, joins others during a news conference outside of Police Headquarters in Manhattan to protest during the police disciplinary hearing for Officer Daniel Pantaleo on May 21, 2019, in New York.

Since Eric Garner's death, his mother, a retired transit train operator, also became an activist and wrote a book, "This Stops Today."

"His death set the tone for a new normal where young black men and women now automatically document police interactions with their cell phones for fear of brutality and even death," Carr's website says.

Carr was embraced by other women like Iris Baez, Hawa Bah and Constance Malcolm, whose sons were killed by police officers who were also not charged. The heartbroken mothers joined with elected officials like the former New York City Public Advocate Leticia James, who is now the state's attorney general, to call for grand jury reform and for a special prosecutor to step in to investigate fatal police-involved incidents where an unarmed civilian was killed.

In July 2015, New York Gov. Andrew Cuomo issued an executive order assigning the state attorney general to investigate cases where unarmed civilians are killed during law enforcement-related incidents. The order was considered a temporary fix as Cuomo waits for lawmakers to pass a bill that would fully fund a separate office to conduct the investigations.

To date, nine states have created procedures to improve transparency into police-involved deaths or allegations of misconduct, according to the National Conference of State Legislatures. Only New Jersey, Maine and Montgomery County, Maryland, have passed laws to require outside law enforcement personnel to investigate police-involved deaths.

(MORE: Erica Garner, who became outspoken activist after her dad was police chokehold victim, has died)

Although Cuomo's executive order was too late for the Garner family, the state AG's office has investigated 17 cases as of May 2018.

Of those cases, the AG has charged two law enforcement officials: Officer Wayne Isaacs for the July 4, 2016, death of Delrawn Small, and Rensselaer County District Attorney Joel E. Abelove for allegedly concealing evidence during an investigation of a fatal police-involved shooting of a Troy, New York, man.

A jury acquitted Isaacs. And a state judge tossed Abelove's indictment, saying that the AG's office overstepped its jurisdictional authority to charge for felony perjury charges. 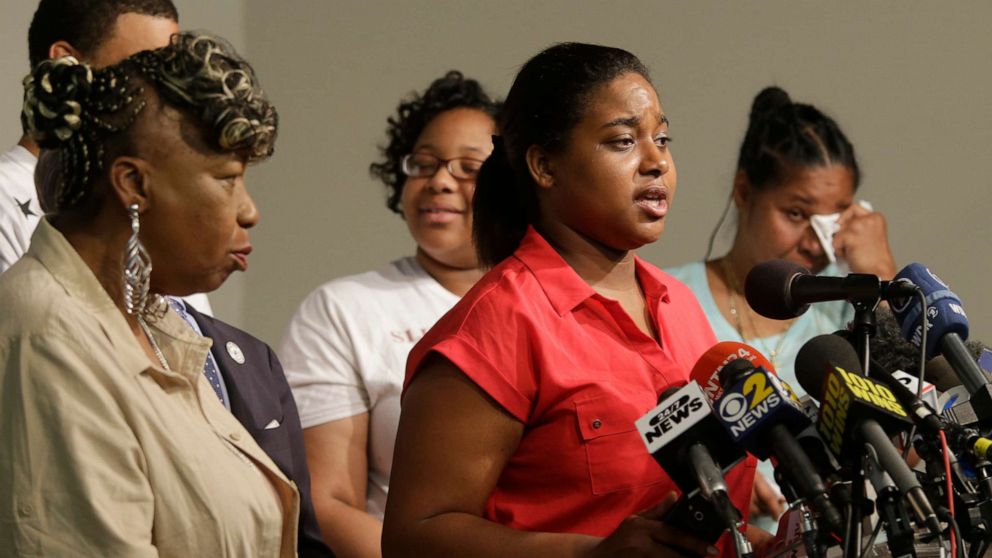 His last words, an emerging movement

Before Garner’s death was captured on camera and seen around the world, a relatively new hashtag, #BlackLivesMatter, was taking form. Following the 2013 acquittal of George Zimmerman, a Florida community watchman who shot an unarmed 17-year-old boy wearing a hoodie -- Trayvon Martin, who Zimmerman said looked "suspicious" -- a group came together to, among other things, shine light on the senseless killings of African Americans.

Others deaths would follow, including the 2014 police killing of Michael Brown in Ferguson, Missouri, and the organization and hashtag took the country by storm.

Among the deaths that Black Lives Matter protested was Garner’s. "I can’t breathe" was soon heard and seen in massive protests in New York City -- in chants, on placards, and in social media accompanying the now-famous hashtag, #BlackLivesMatter -- which contributed to a national discussion that even reached President Barack Obama’s White House.

Garner’s death was also among the first to be captured on video. In the months and years that followed, the deaths of other innocent black people were also seen worldwide -- Laquan McDonald in Chicago in 2014; Walter Scott in South Carolina in 2015; and Philando Castile in Minnesota in 2016, to name a few.

The police officers who killed McDonald and Scott were convicted and sentenced to prison terms; the officer who shot Castile to death was indicted but later acquitted in a trial.

The search for justice for Garner’s family, however, has been more elusive and filled with uncertainty.

Still, years after his death and the NYPD announced departmental charges against Pantaleo, no criminal charges have been filed against the officer.

The move came on the heels of a letter sent to the Department of Justice by the NYPD's deputy commissioner of legal matters, Larry Byrne, who wrote: "The NYPD has come to the conclusion that given the extraordinary passage of time since the incident without a final decision on the U.S. DOJ's criminal investigation, any further delay in moving ahead with our own disciplinary proceedings can no longer be justified."

The seven-day departmental hearing in May and June was conducted by the Civilian Complaint Review Board because federal charges were still pending.

During that CCRB hearing, Garner's mother and supporters sat inside the small courtroom within police headquarters in lower Manhattan to hear Pantaleo's attorney, Stuart London, charge that Garner caused his own death because of his weight and heart disease. Each day after the hearing adjourned, London and union representatives were greeting by dozens of demonstrators.

London maintains that Pantaleo did not use an illegal chokehold, but a takedown method called a "seatbelt."

Pantaleo, 33, did not testify during the hearing; instead, his lawyers submitted 75 pages of his interview with IAB for the department's consideration.

If found guilty, Pantaleo, who has been on desk duty, could face termination or a loss of vacation days. Ultimately, NYPD Commissioner James O'Neill or Mayor Bill de Blasio can determine the officer's fate by deciding his punishment.

Time is running out, though, for federal charges against Pantaleo -- the DOJ has just days to decide whether to prosecute him before the fifth anniversary of Garner's death.