Beyoncé and JAY-Z are turning heads as the stars of Tiffany & Co.'s latest ad campaign.

The power couple is seen together in the jewelry brand's "ABOUT LOVE" campaign which is inspired by the idea of modern love and photographed by Mason Poole against the backdrop of Jean-Michel Basquiat’s Equals Pi (1982).

Slated to officially launch globally on Sept. 2, this marks the first time the dynamic duo has starred together in an ad campaign.

"Love is the diamond that the jewelry and art decorate," the couple said in a statement surrounding their Tiffany & Co. debut. 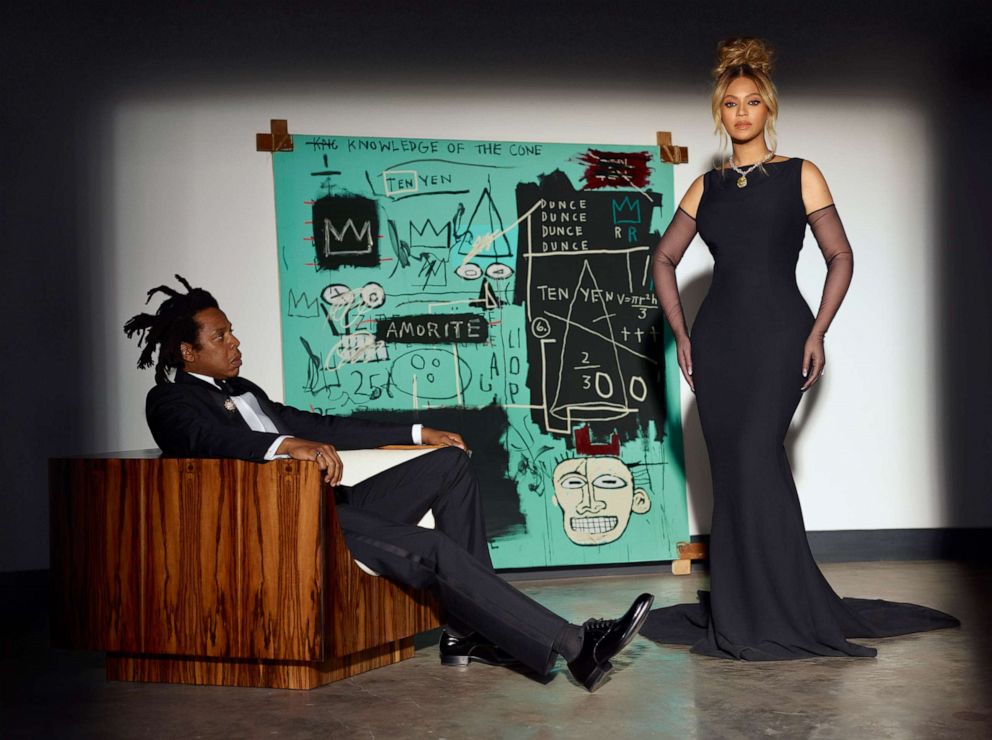 Beyoncé is wearing the jeweler's priceless Tiffany Diamond which has 128.54 carats and a unique 82 facets.

The is also the first time the stunning gemstone has appeared in a campaign. It has been worn only three times before since being purchased by founder Charles Lewis Tiffany in 1878.

Other notables who have worn the famous jewel include Lady Gaga during the 2019 Oscars as well as Audrey Hepburn for her legendary "Breakfast at Tiffany's" photo shoot in 1961.

Along with the famous diamond, Beyoncé also wears a beautiful black cutout dress styled by June Ambrose as well as Marni Senofonte. Her elegant updo was done by celebrity hairstylists Jawara Wauchope and Nakia Collins.

JAY-Z is also wearing some of Tiffany & Co.'s most unique jewels including Jean Schlumberger’s legendary Bird on a Rock brooch which was reconstructed as a pair of one-of-a-kind cuff links.

"Beyoncé and JAY-Z are the epitome of the modern love story," said Alexandre Arnault, Tiffany & Co. executive vice president of product and communications. "As a brand that has always stood for love, strength and self-expression, we could not think of a more iconic couple that better represents Tiffany’s values. We are honored to have the Carters as a part of the Tiffany family.”

In addition to the extraordinary portraits captured of the Carters, there is a upcoming film directed by Emmanuel Adjei and shot by JAY-Z on a Super 8 camera which captures a reimagined musical performance of Beyoncé singing the classic "Moon River" song made famous in the 1961 "Breakfast at Tiffany's" film which will be released on Sept. 15.

Selected by JAY-Z and Beyoncé, the film was shot at the Orum House in Los Angeles where nostalgic flashbacks are interwoven with cinematic, dreamlike visuals. Basquiat’s Equals Pi also appears again as a common Tiffany Blue thread throughout.

In conjunction with Tiffany & Co.'s partnership with the Carters, the jewelry label is also pledging a $2 million commitment toward scholarship and internship programs for Historically Black Colleges and Universities (HBCUs).