Duchess Meghan made a ravishing return to the red carpet alongside her husband Prince Harry this week.

The couple attended NYC's Intrepid Museum for the Salute to Freedom gala where they honored veterans.

During their appearance, the Duchess of Sussex shined in a stunning red gown from Carolina Herrera's pre-fall 2022 collection by creative director Wes Gordon.

The sleeveless dress included a deep-V neckline along with an elongated caped skirt. She paired the look with satin rouge pumps and an elegant, neat updo hairstyle.

Carolina Herrera shared a sketch of the extraordinary look on Instagram where many fans shared comments on the look.

Harry wore a black tuxedo accompanied by his military badges, a bowtie and a pinned poppy that honors military members who've died during war. Meghan wore a poppy on her dress as well.

During the gala, Harry, who served in the British armed forces for a decade, handed out medals to honor members of the military.

MORE: Duchess Meghan responds to tabloid's appeal in lawsuit over letter to her estranged dad 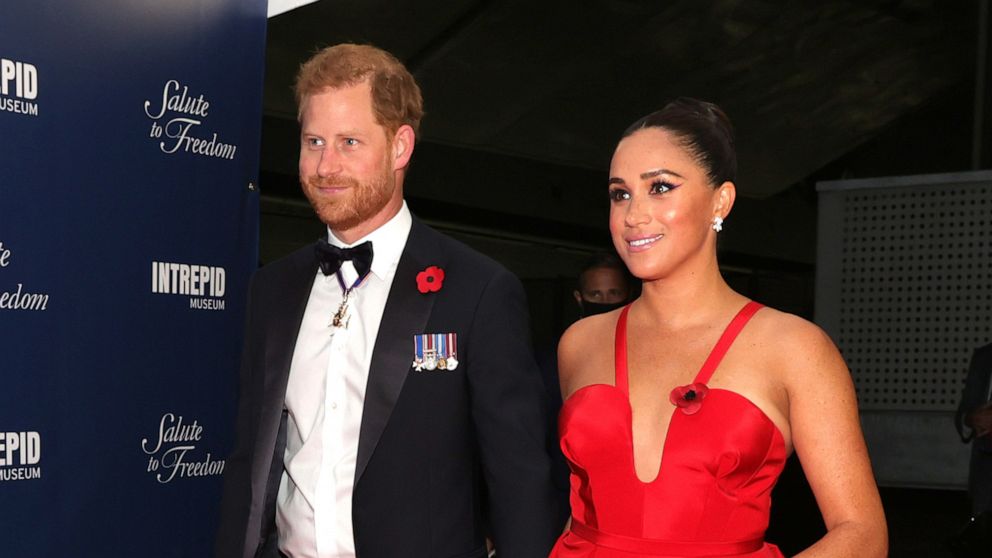 "As many of us see it, service isn't loud. Service is what happens in the quiet and when people aren't looking. It's about how we take care of each other every day. It's about the camaraderie we share … the laughs, the comfort, the pain, the challenge, and yes, the banter," Harry said.

He continued, "My experience in the military made me who I am today, and I will always be grateful for the people I got to serve with – wherever in the world we were."