One deserving bride is living out her biggest Disney wedding dreams.

Morgan Newcomer, a 2022 bride who is finally having her big day after it was postponed due to COVID-19, received the surprise of a lifetime thanks to Disney.

Newcomer, a nurse and Disney superfan who won "GMA's" World's Most Magical Wedding Dress Sweepstakes, kicked off her wedding events with an ultimate Walt Disney World bachelorette party, where she and four of her close girlfriends shared a magical time. The bridal brigade taking on Disney’s Epcot where they explored the world showcase, including Morgan’s favorite, France, seeing the topiaries of Beauty and the Beast and Ratatouille, during the Flower and Garden festival. They also explored the Magic Kingdom, Main Street before it opened, and even met princess Belle outside her castle. At night the friends celebrated with dessert and went on an evening boat ride on the Seven Seas Lagoon to see the Magic Kingdom come alive from the water for Disney Enchantment.

"It's her dream come true!" Newcomer's friend, Brigette Shelton, said of the bride-to-be. 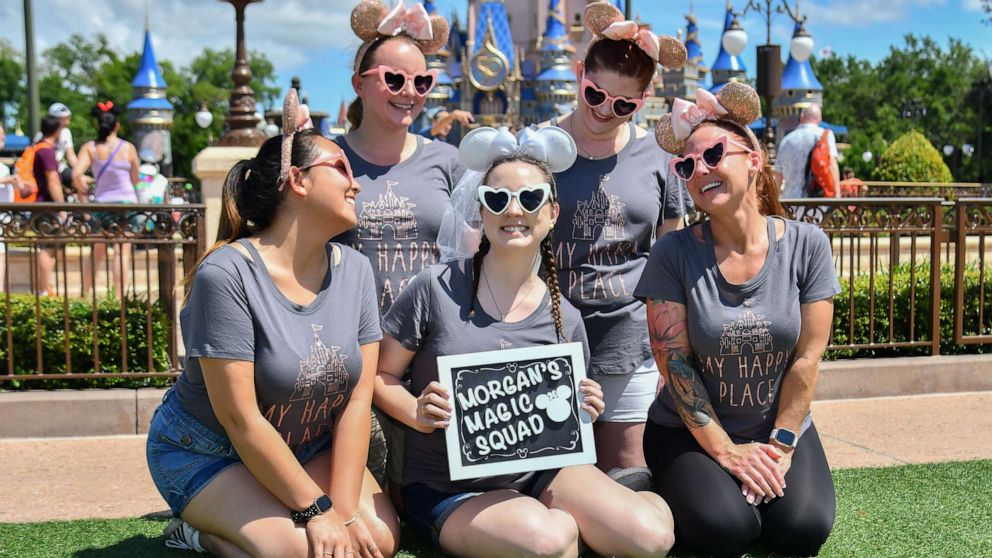 ABC News.
Morgan Newcomer and her friends at Magic Kingdom in Orlando, Florida.
MORE: Say 'I do' in one of these wedding dresses from the 2021 Disney Fairy Tale Weddings Collection

"It's her dream come true!" Newcomer's friend, Brigette, said of the bride-to-be.

Newcomer is finally getting her dream wedding to her now-husband, Bryce Newcomer, in December at the Disney Wedding Pavillion -- the two officially tied the knot in 2020 because Bryce is in the U.S. Army.

The couple met on a dating app while he was stationed in Maryland and she was living in Pennsylvania. Bryce popped the question nine months later.

Just like Morgan, Bryce is also a big Disney fan. When they lived in Georgia, they drove to Walt Disney World six times.

"I love that Bryce will always match with me when we go to the parks if I ask him to," Morgan Newcomer said.

As the winner of the World's Most Magical Wedding Dress Sweepstakes, Morgan Newcomer also received a one-of-a-kind wedding dress inspired by the Walt Disney World Resort's 50th anniversary celebration, which included a wedding dress consultation with Nikki Deeds from Allure Bridals at Franck's Bridal Studio. She was able to try on accessories such as tiaras, earrings and a veil to complete her look.

Morgan Newcomer was also surprised with a honeymoon gift from Aulani, A Disney Resort and Spa in Hawaii, where she and Bryce will be enjoying a five-night stay.