Disney's latest vacation experience takes hospitality out of this world and to a galaxy far, far away for an immersive, first-of-its-kind voyage aboard the brand new Star Wars: Galactic Starcruiser.

Guests become passengers and heroes in their own Star Wars story as they live out a tailor-made galactic adventure at their own pace aboard the Halcyon Starcruiser. The vessel is known for its impeccable service and exotic destinations, like the bustling Black Spire Outpost on Batuu. Plus, you can finally live out your childhood dreams and wield a lightsaber in a training pod and dine on delicacies like Felucian-inspired blue shrimp. 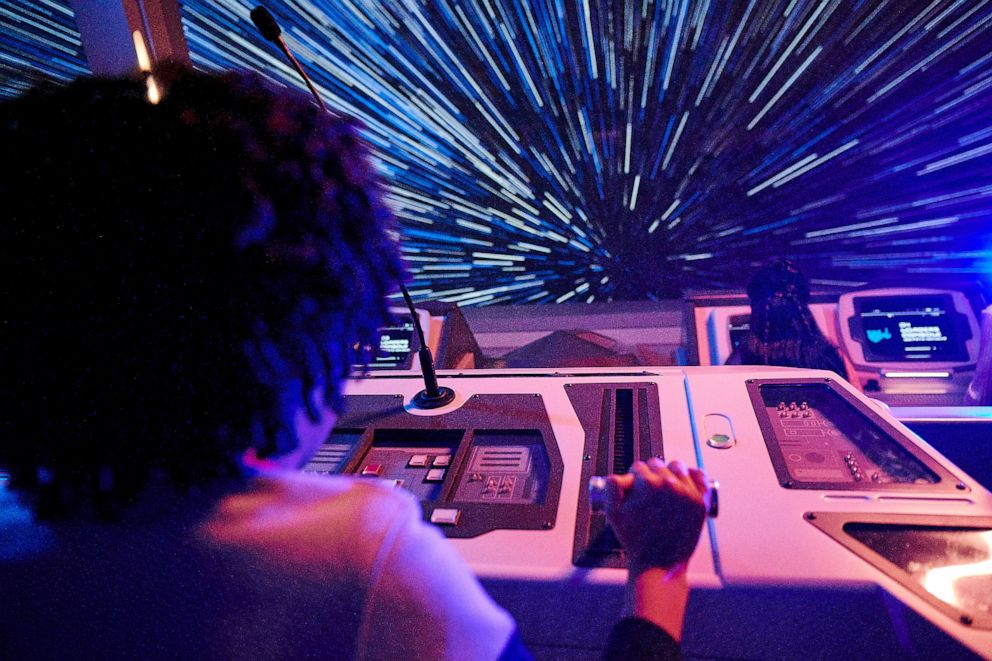 Before Star Wars: Galactic Starcruiser debuts at Walt Disney World Resort on March 1, we got an inside look at the two-night voyage aboard the Chandrila Star Line and after an exhilarating 48 hours we brought the highlights, sights and sounds back to Earth. 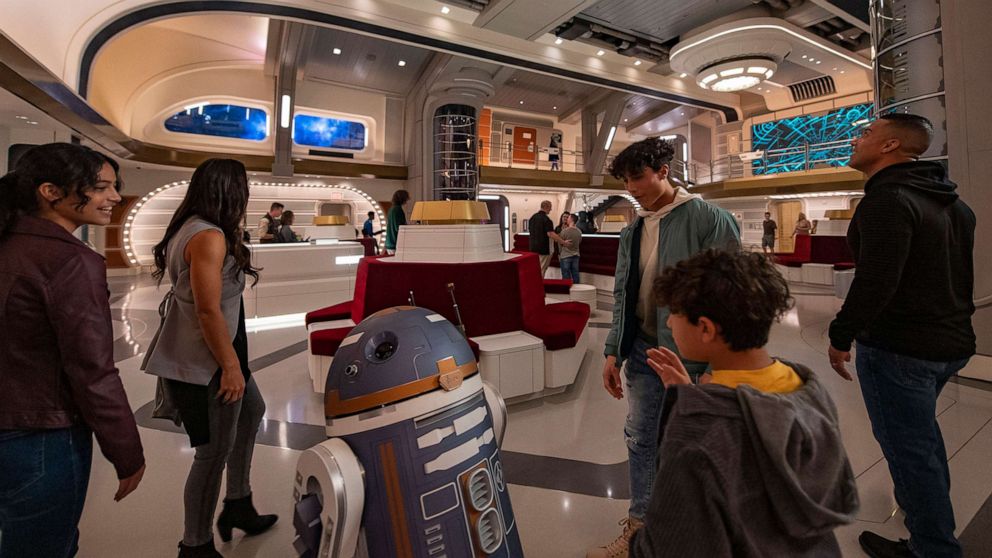 Familiar faces like Chewbacca and new characters emerge throughout the journey as the storyline spins forward.

Captain Keevan is at the helm, encouraging exploration, as cruise director Lenka Mok notifies people they can try their hand at defending the ship with operations training on the bridge, and Sammie the mechanic makes a name for himself while working on more than just systems in the engineering room. Guests also get to enjoy the music stylings of intergalactic superstar Gaya and meet her charismatic manager, Raithe Cole, who has his eyes on more than the stage throughout the voyage.

"We are seeing people play with our characters as if they are action figures in a big Star Wars play set. They get their own personal interaction with them for extended periods of time and run around the ship with these characters leading them on missions," Finstein told "GMA." "They participate in Star Wars in a scale that they have never had a chance to do before. If you're a Star Wars fan you are going to experience Star Wars in a new way and it's very exciting."

As the storyline unfolds, we meet Lieutenant Croy of the First Order and his stormtroopers when they board the ship to investigate suspicious Resistance activity.

Toward the climax of the final night, without giving away any spoilers, guests are stunned by an interaction with a handful of iconic characters as an intense battle unfolds.

"It's really a lot of fun," Chiang added, "anything Star Wars for me, but this level of immersion is unlike anything I've ever done."

Lightsaber training was no doubt the most-buzzed-about activity and for good reason.

The Saja, who trains a group of about 15 passengers at a time, leads you in the pod and lines you up in rows before powering up the electric blue weapon.

Upon instruction, students square up and ground their ready stance holding the base of the lightsaber at their body's center, pushing the button to illuminate the shaft and following a guided laser that sends a low-frequency buzz through your grip as you connect the weapon to the force.

Excursion to Black Spire Outpost on Batuu at Galaxy's Edge 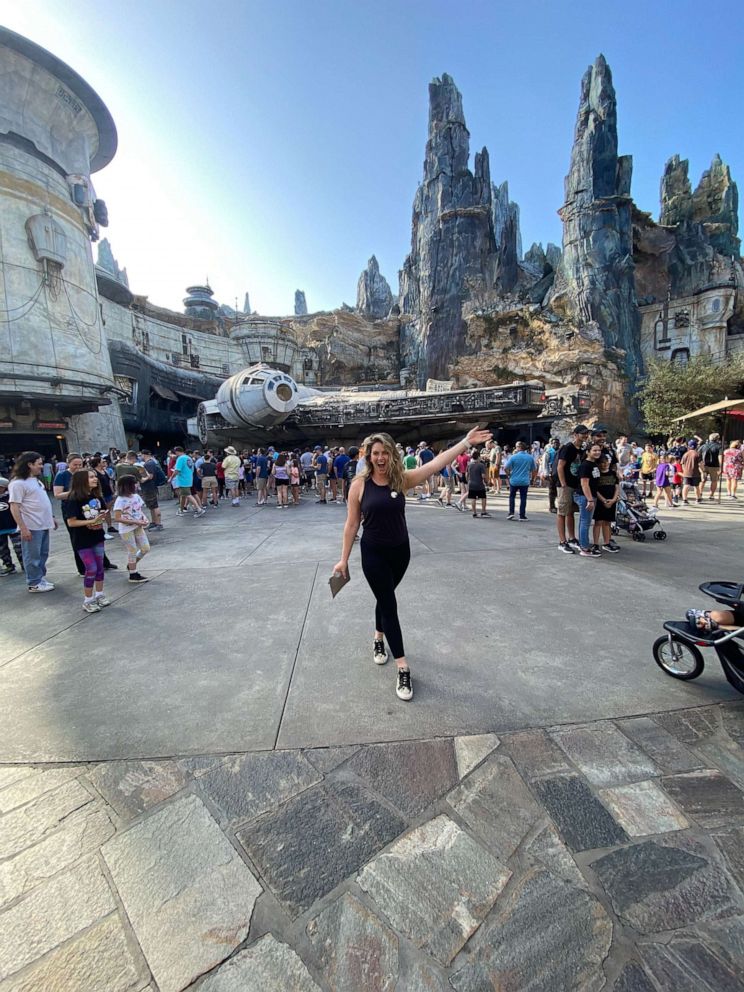 Early on the second day, passengers are invited onto luxurious private transport shuttles to de-board and explore the galaxy's Outer Rim. At this point in each passenger's journey, their interactions have led to curated communications on their datapad to attempt missions for the characters they are helping while exploring the outpost.

A private reservation can be set up for Halcyon guests at the infamous Oga's Cantina, where I made friends with a chemist in order to get some pertinent information back to the ship for my own storyline's mission. The brightly colored, foaming, fizzing and bubbling beverages are a welcome libation break at this point in the planetside adventure and the perfect fuel before enjoying activities like hacking droids and running covert ops for either the dark side or the Resistance. 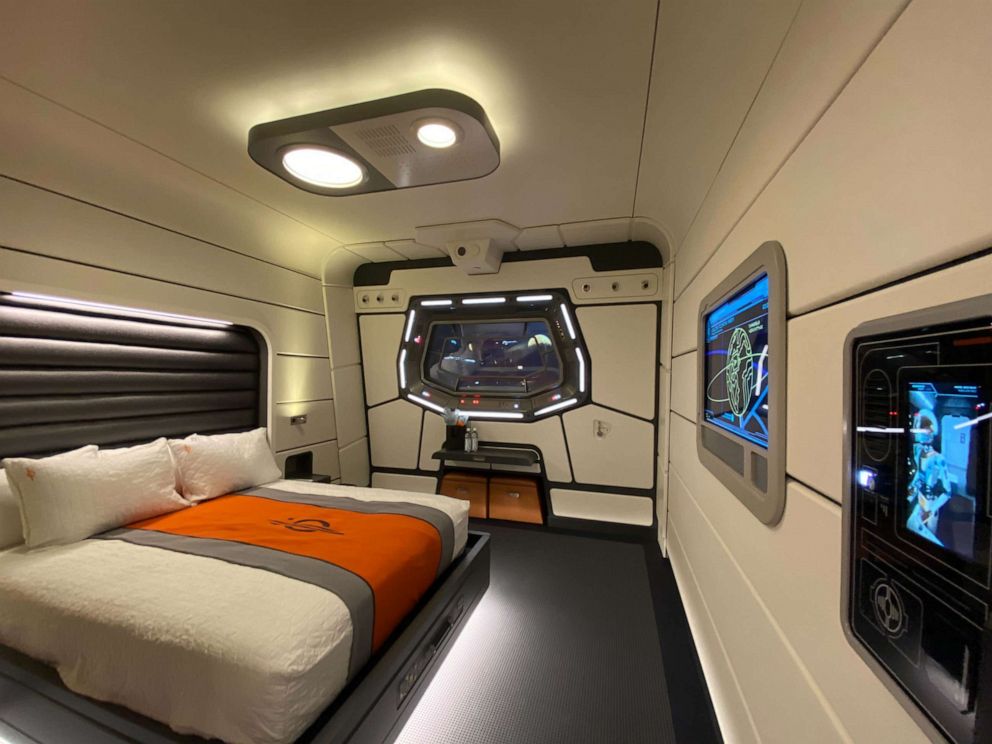 Kelly McCarthy
Cabins for guests aboard the Halcyon Starcruiser.

Guests enjoy a well-appointed pod complete with stunning viewports that overlook the galaxy. The room we stayed in, but really only relaxed in to shower and sleep, had the Earth's equivalent of a king-size bed and two bunk pods. The sleek design was complete with modern functionality like ports for datapad charging and even an in-room digital logistics droid who goes by D3-09 and acts as a catalyst for each individual's daily story to continue with helpful information. By the end, she also became a confidant and friend who I was sad to say goodbye to.

As for off-ship, the special transport shuttle is reminiscent of a luxury bus-like liner and takes less than a 10-minute blast to planet where you are greeted by a private concierge service with cold water, charging ports and offered a direct contact to drop off any goods secured along the excursion, so if you purchase a porg plushy toy or local garments, you can leave them safely with the crew who will free your hands and take it back to the ship. Before departing Batuu, where temperatures can run hot, the crew offers chilled, wet towels and more beverages while waiting for your pod departure.

The specialty Magic Band that is worn throughout the voyage, available exclusively to passengers of the Halcyon cruise, also gives you access to information pads on ship, unlocks rooms and helps save and scan pivotal information specific to your personal adventure that sends feedback to your profile.

Additionally, it is preloaded with lightning lane passes for the two highly popular rides on Galaxy's Edge -- Rise of the Resistance and Smuggler's Run.

The imaginative dining program developed especially for this experience plates up dishes with familiar tastes but unexpected textures, colors and ingredient names to further deepen the immersion of your galactic voyage.

Similar to an Earth-bound cruise, all-you-can-eat breakfast and lunch buffets are available inside the sleek Crown of Corellia Dining Room during the day, but then each night of the voyage it transforms to serve diners a lavish multicourse, table-service menu of both otherworldly and familiar origins.

Night one boasts dinner and a show where I enjoyed a seat at the captain's table in the center of the sunken seating area with an interactive live performance from Gaya -- the Twi'lek musical superstar who moves throughout the room singing her greatest and new hits. The second night offers a Taste Around the Galaxy experience with each course that hails from a different planet, including the highly buzzed about blue crustacean, Felucian shrimp. 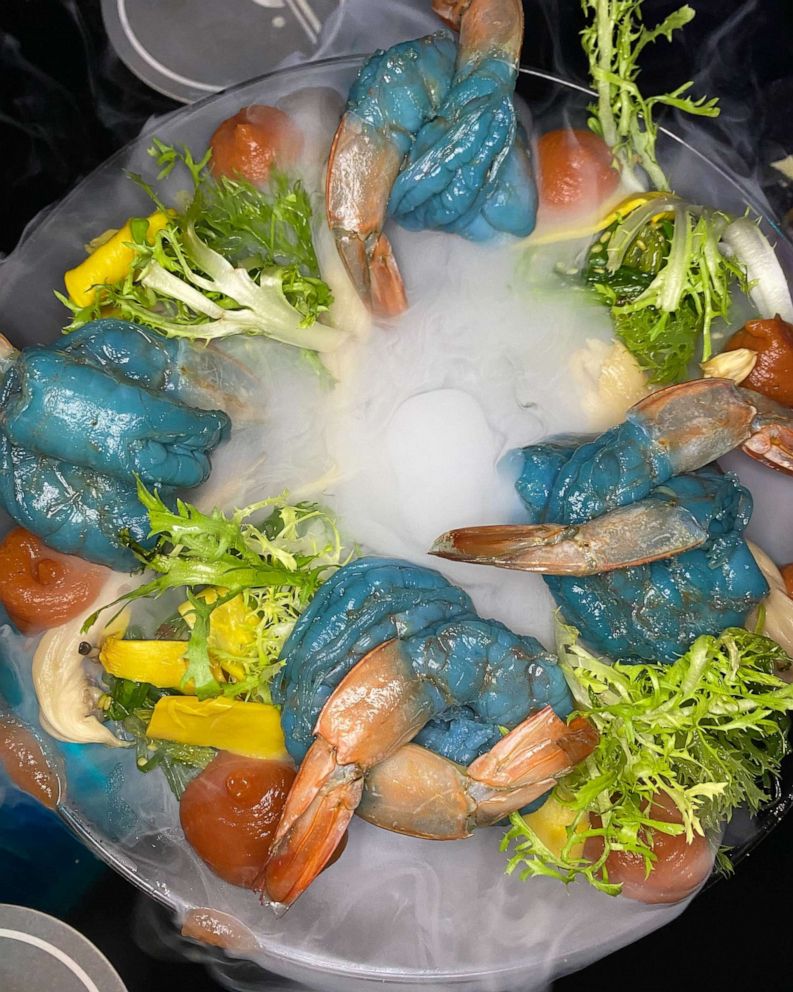 Guests looking for a late-night libation or a game of Sabaac can snag a seat in the Sublight Lounge for drinks like the Fiery Mustafarian complete with lava extract and smokey mezcal or a Hoth Icebreaker made with lemon foam inspired by the icy desolate planet.

A one-of-a-kind Chandrila Collection boutique on board offers an extensive selection of never-before-seen merchandise to enhance the role-play vacation experience. The shop has a sweeping assortment of apparel and accessories for purchase from Lekku head tails, trading pins with the ship's logo and authentic apparel to home goods, hats and backpacks.

Disney is the parent company of Good Morning America and ABC News.