Standing at over 12,000 feet, Mount Fuji was added to the World Heritage List just a few years ago and has long been considered a sacred place. The mountain is Japan's tallest peak and has been the subject of art and literature for hundreds of years, with thousands traveling there each day to reach the summit and gaze at the countryside at dawn.

Climbing Fuji was never going to be an easy task, not just because of the physical demands of the landscape, but because navigating Japan's tallest mountain with a tight schedule, language barriers, and while lugging heavy camera equipment was always going to be a challenge. Add to that Japan's state of emergency due to the COVID-19 pandemic.

Once our team -- correspondent Amy Robach and producers Bruno Roeber, Jimmy Gillings, and me -- landed in Tokyo, we immediately began planning. 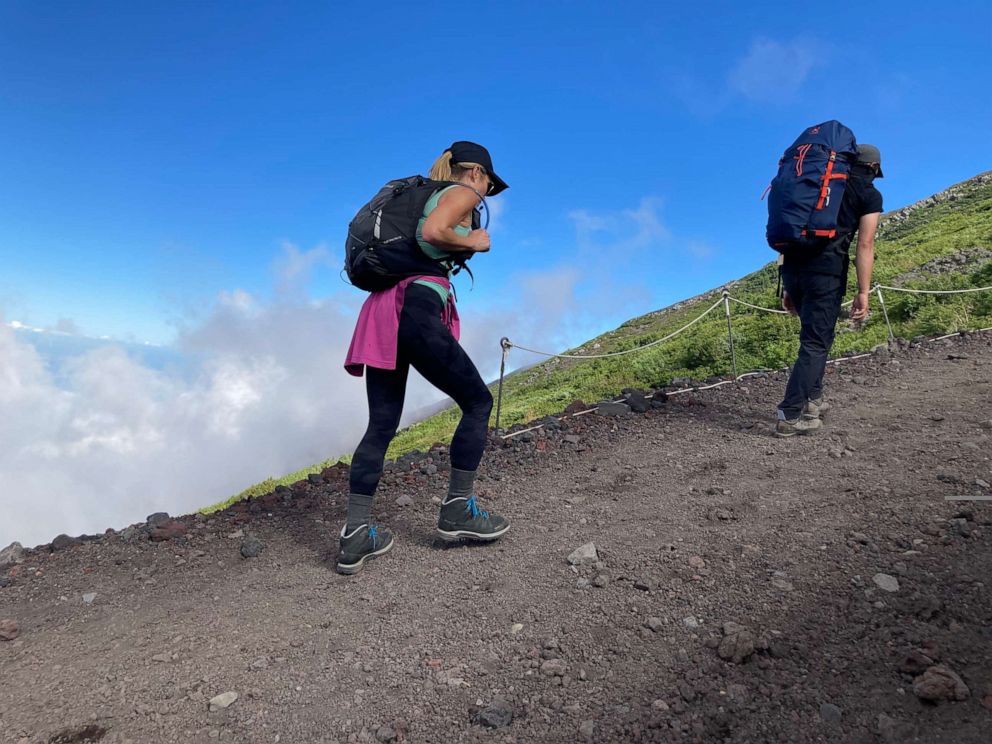 First, we needed to decide which trail we wanted to hike, landing on the Yoshida Trail -- the easier, if not the quickest, path. Making it to the summit seems simple enough, but over the course of the two-day hike climbers are met with falling rocks, slippery terrain, darkness and high altitude, which can lead to severe headaches and nausea. It also was clear that if we were going to do this, we'd need a guide.

Ota San has climbed Mt. Fuji hundreds of times, and recommends hikers visit between July and September. Any other time is dangerous because of heavy snow. Ota San also is the representative director of the Mount Fuji Trail Club, a volunteer group that focuses on the mountain's environment and strives to keep climbers safe.

We met Ota San at the bottom of the mountain's fifth station, where he was waiting patiently for our van to arrive. As we all stepped out, Ota San quickly sized us up, especially one of my woefully unprepared teammates who, he said, needed proper equipment to make the trek. 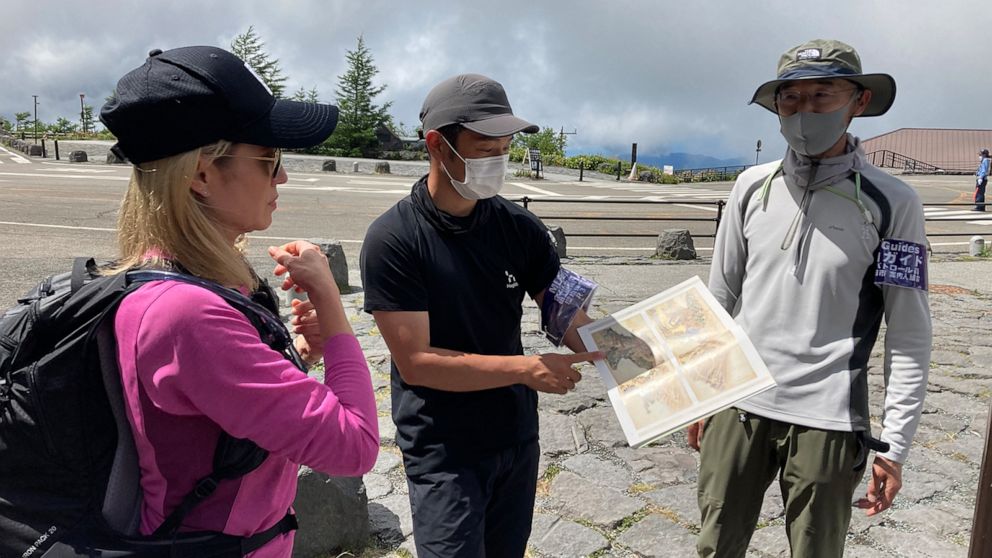 Ota San then showed us a book with detailed drawings of Fuji and he explained through his translator what we could expect: extreme heat at the base, cold weather conditions at the summit, and the possibility of falling rocks on the last leg of our journey. He took out a pen and drew a clear picture of our route -- through the mountain's various stations, where water and oxygen could be provided.

As we began, Ota San set a slow pace and urged us to take deep breaths. He and his team of four guides helped explain the history of the trail.

We were already surrounded by clouds and lush green trees as the hike started, and this, according to Ota San, is the easy part.

Our group climbed the mountain under a unique condition: perfect weather. The sun was shining, the wind was minimal and temperatures were mild. Still, it wasn't easy. We were forced to carry heavy packs -- camera equipment, food, water, winter gear.

The second leg of the climb proved to be much more strenuous than we anticipated. Ota San pointed out that as we moved higher we would encounter rockier terrain, and warned us to take things slow.

The trail not only became rockier, but steeper. We soon found ourselves grabbing onto boulders, leaning forward, and moving at a snail's pace. The steeper trail also meant that our group was going to be spaced out more, and that's why Ota San brought two other guides with him, to make sure we stuck together. 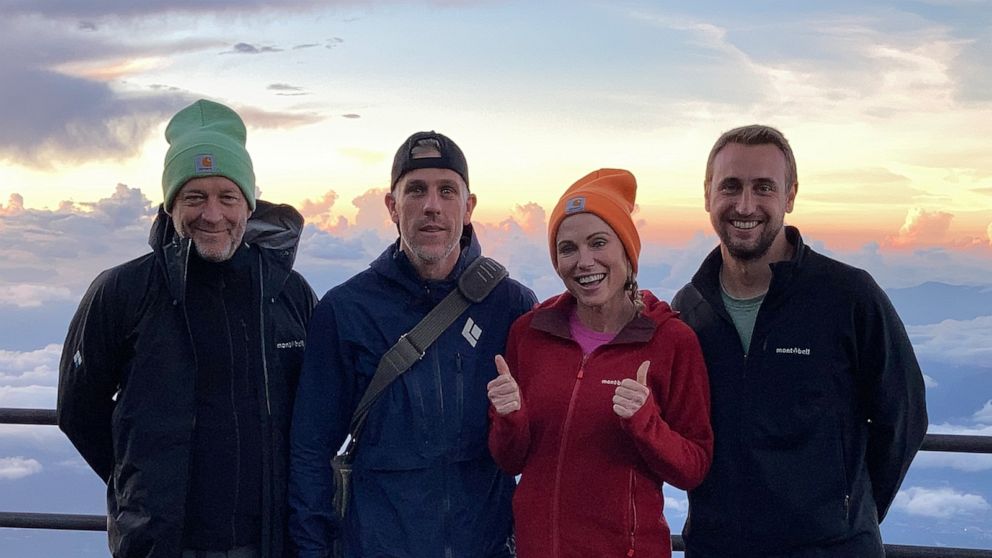 Several hours into the climb, I turned around and noticed that one member of our group was missing, so I waited. I told Ota San to continue on as I went back to check on our colleague.

When I found him, he was drenched in sweat and gasping for air as two guides tried to slow him down. I made the mistake of asking if he was OK, knowing full-well he wasn't. He immediately shot me a look and stammered "Of course I'm not OK. I am suffering!"

The guides said this was due either to dehydration or altitude sickness, so I pulled out some water and managed to get a can of oxygen from one of the stations along the trail. That seemed to do the trick, as our colleague quickly rallied to rejoin the group. I'm not sure if it was the water, oxygen or sheer stubbornness that caused him to recover, but regardless, he made it.

'Please, sleep in this hood'

Five hours into our journey we came across the eighth station, where we planned to stay the night. The station was a small hut carved into the mountainside with a lookout area high above the clouds. Inside, there were rows of sleeping cubbies with thin curtains that separated the hikers.

One of the workers showed us where we were going to sleep and held up a white cloth with a clear plastic window. 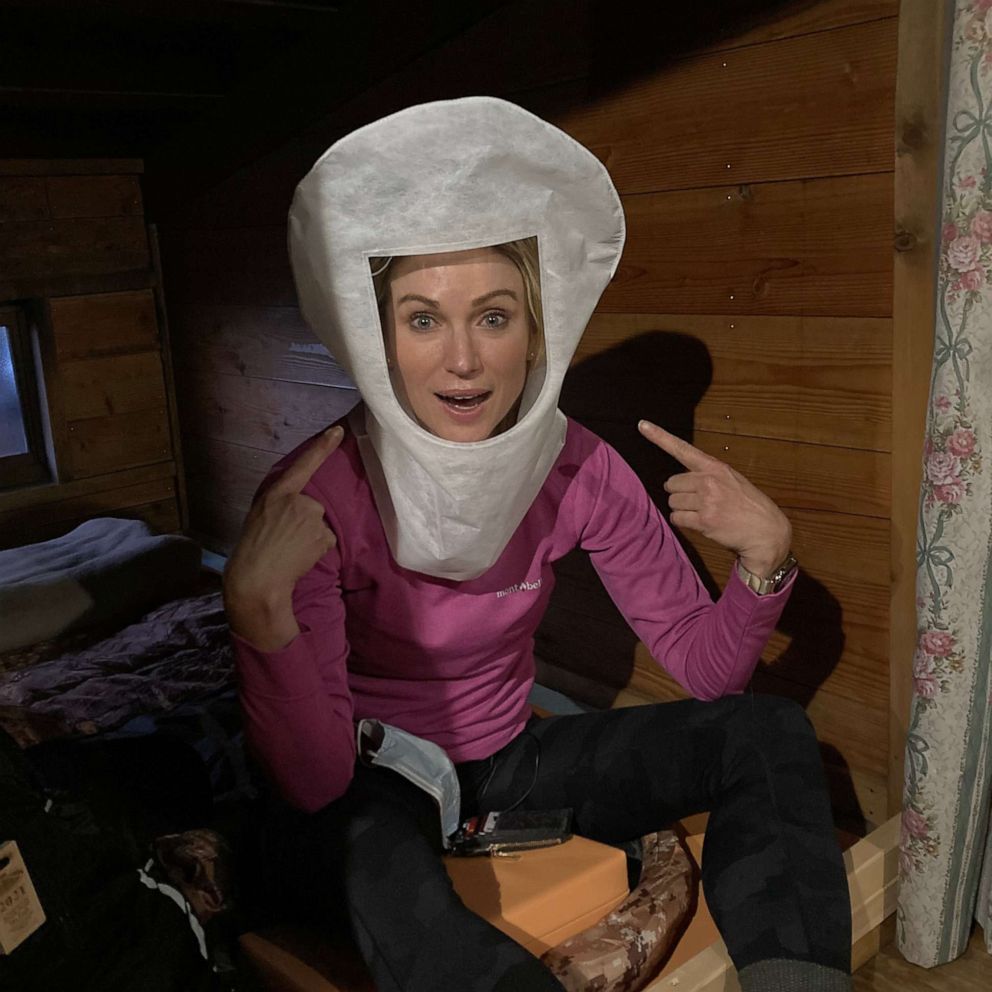 At first I thought it was a towel, or a bag to hold personal items. I was wrong. The worker, through broken English, held up the cloth next to his face and said "Please, sleep in this hood." Our group, slowly realizing what he was asking, just stared at each other. He held up the hood again and said "Please, stop the spread." We live in strange times, and with a majority of Japan's population unvaccinated, we understood why they were taking extreme precautions. Still, the hoods were uncomfortable, tight, and made us feel like beekeepers as we slept.

The cover of darkness

Waking up at midnight, our team geared up for the final leg of the hike. Ota San provided us with helmets, which are recommended in case of falling rocks. As we started our climb we could see the lights of Tokyo in the distance, including the Tokyo Tower, where the ABC News set was located. Hovering above the city was the brightest crescent moon I'd ever seen, the blood orange hue bright in the cloudless sky.

But it was shortly thereafter we noticed hundreds of other lights moving up the mountain -- the headlamps of other hikers making the same journey, and the last thing we wanted was to get stuck behind them.

MORE: Should you delay your trip due to the delta COVID-19 variant surge? Experts weigh in.

As we neared the summit, we started to feel the altitude difference, some of us getting headaches. Once the headaches set in, Ota San had us rest at the old abandoned ninth station, a small hut carved into the rock. As we sat, our guide explained how this location was where many travelers sat to watch the sunrise.

After a few moments we gathered our equipment and made the final climb to the summit, but when we arrived it was still dark.

That was when Ota San suggested we hike to the tallest spot on Japan's tallest mountain. 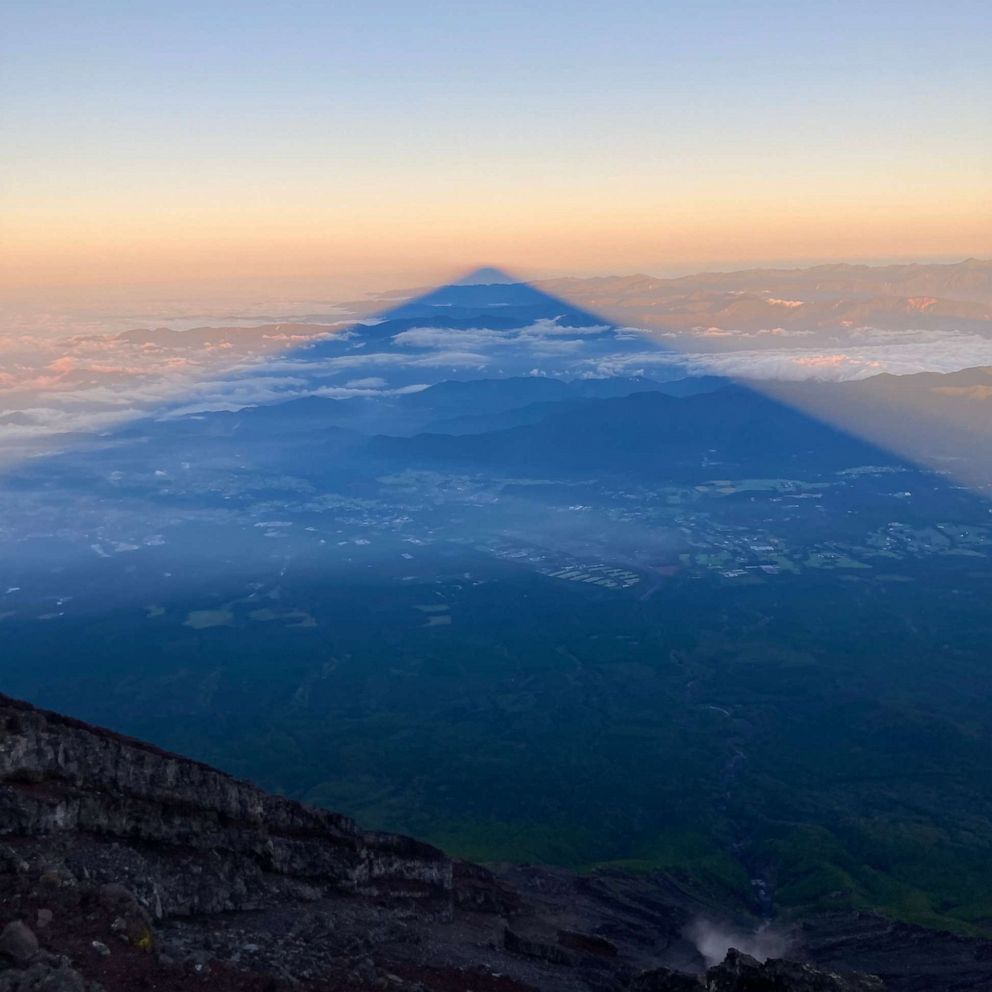 The sun had just started to rise when we began the 45-minute hike around Fuji's massive volcanic crater. We were still in darkness, but Ota San assured us that the hike around the outer rim of the volcano was a must-see, and he was right. As we walked, the sun revealed the massive crater to our right, and while there was no snow on the mountain, the crater still had remnants of ice sheets sticking to the side.

Ota San and his team then brought us to what was one of the most incredible sights we had seen -- Fuji's shadow extending across the countryside. The shadow was only visible in the low morning sunlight, and is only visible briefly, but the perfect triangular shape shooting out onto the horizon is an image none of us will forget.