Pip the dachshund has finally made it home to Sydney, Australia. It's been a worldwide, monthslong trip around the world made possible by the kindness of strangers.

Pip's family -- the Eilbecks -- are a sailing family: Zoe, Guy and their two children. They were in Key West back in March, Zoe Eilbeck told "Good Morning America," when Key West made the decision that all visitors must depart within 48 hours. They took five days and sailed up the east coast to Hilton Head, South Carolina. Then, Australia closed its borders, and the family knew they needed to get home immediately.

It was then they were separated from Pip and the start of her long journey home. 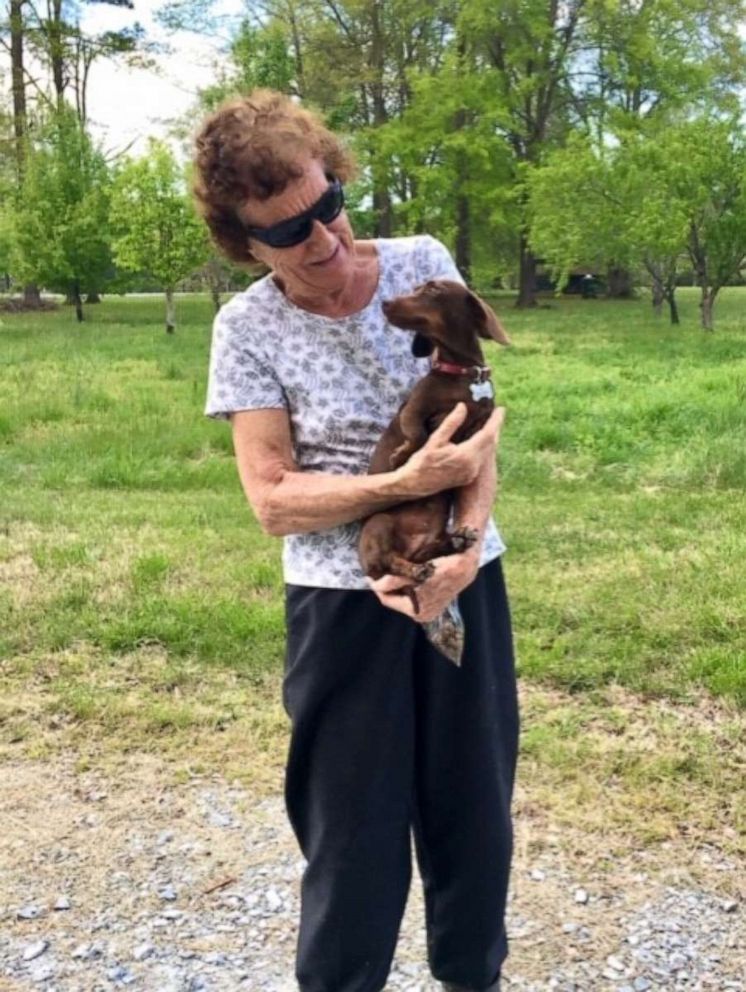 Ellen Steinberg
Lynn Williams was the first person to give Pip a place to stay when her family had to fly to Australia without her.
Editor's Picks
MORE: Underwater art museum finally opens after COVID-19 delay

While Guy prepared the boat for storing, Zoe drove Pip to a friend's house in Hillsborough, North Carolina, and handed her over to Lynn Williams in a car park while the family tried to make arrangements to fly home. "They were canceling flights as fast as we were booking them," Zoe Eilbeck said.

To transport a dog to Australia by plane, Guy said, takes about six months because of the documentation involved. Pets also must fly cargo into Australia and quarantine upon arrival. Because of the speed at which flights had to be booked and decisions made -- plus the very long trip to Australia for tiny Pip in cargo -- the family thought Pip would be better off in the safety of their friend. The family drove to Atlanta, flew to Los Angeles, and got on the last flight to Australia before the borders closed. 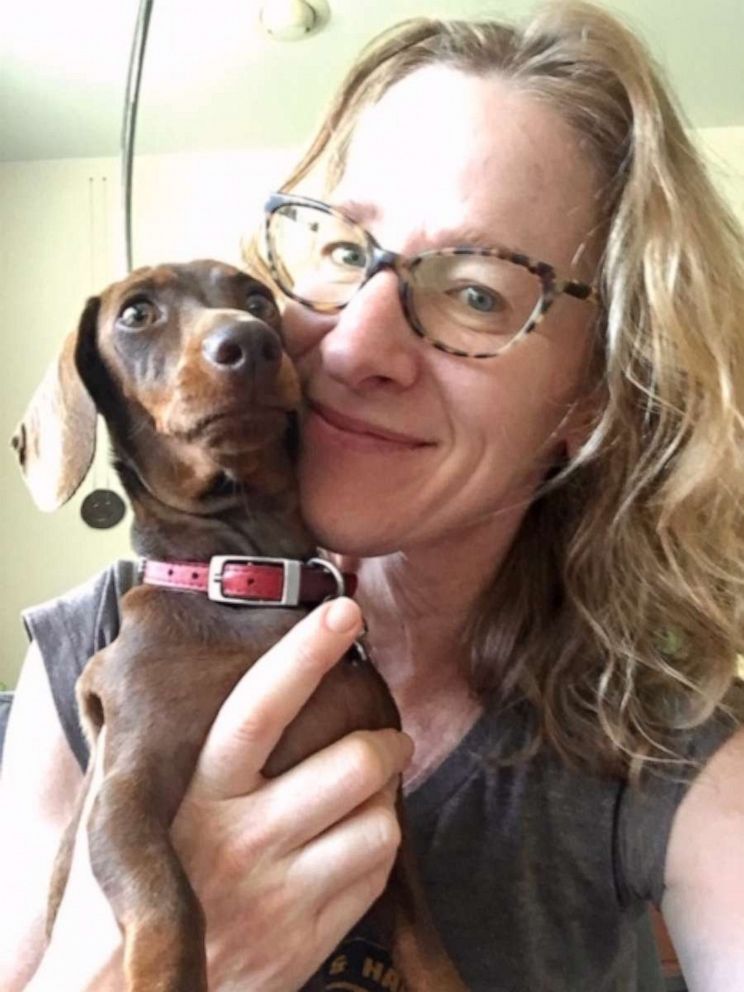 "At this point we thought we were leaving her for 4 to 6 weeks and this whole thing would blow over," Zoe Eilbeck said. "But given the kids, we thought we should get home and then we would come back to get Pip."

But soon the family realized things were about to get much more complicated.

Williams posted on NextDoor and became connected with Ellen Steinberg. Steinberg volunteers at a local animal shelter and when it became clear she would be staying home for a few months, decided to foster a dog. 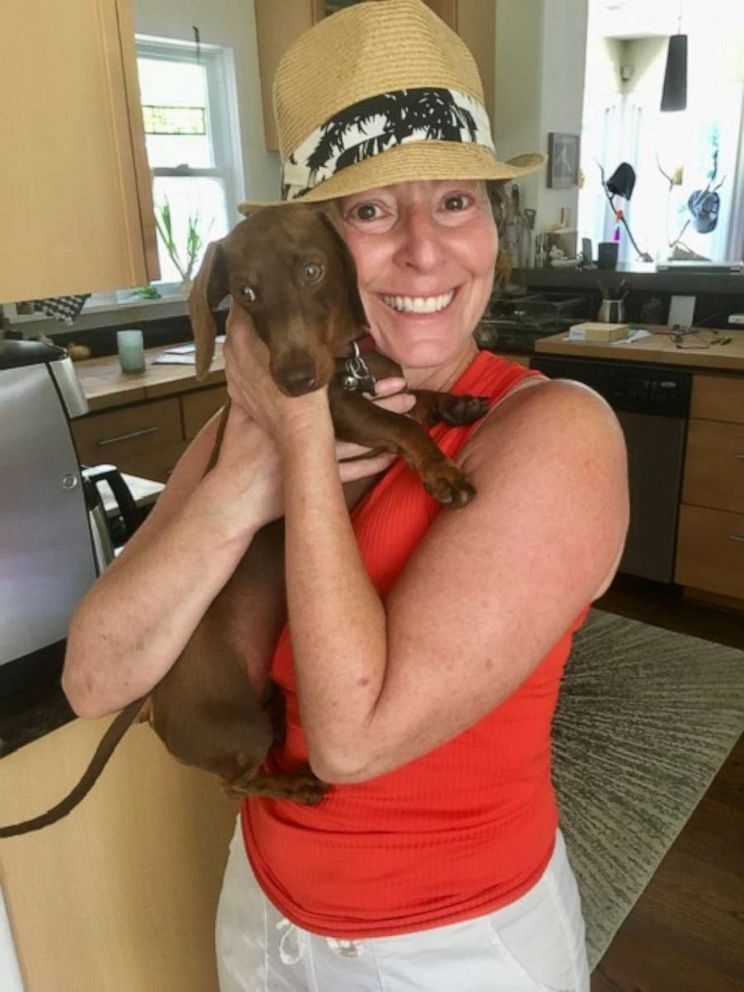 Ellen Steinberg
Stacey Green and Pip.
MORE: Bermuda, Barbados hope to lure travelers to work and live for a year

"She's adorable, tiny, cuddly and sweet," Steinberg said of Pip. "But she had several [behavior] things that she didn't have before as a result of being abandoned so quickly." Steinberg said she thought constantly, "this dog has no idea how hard her family is working to get her back." 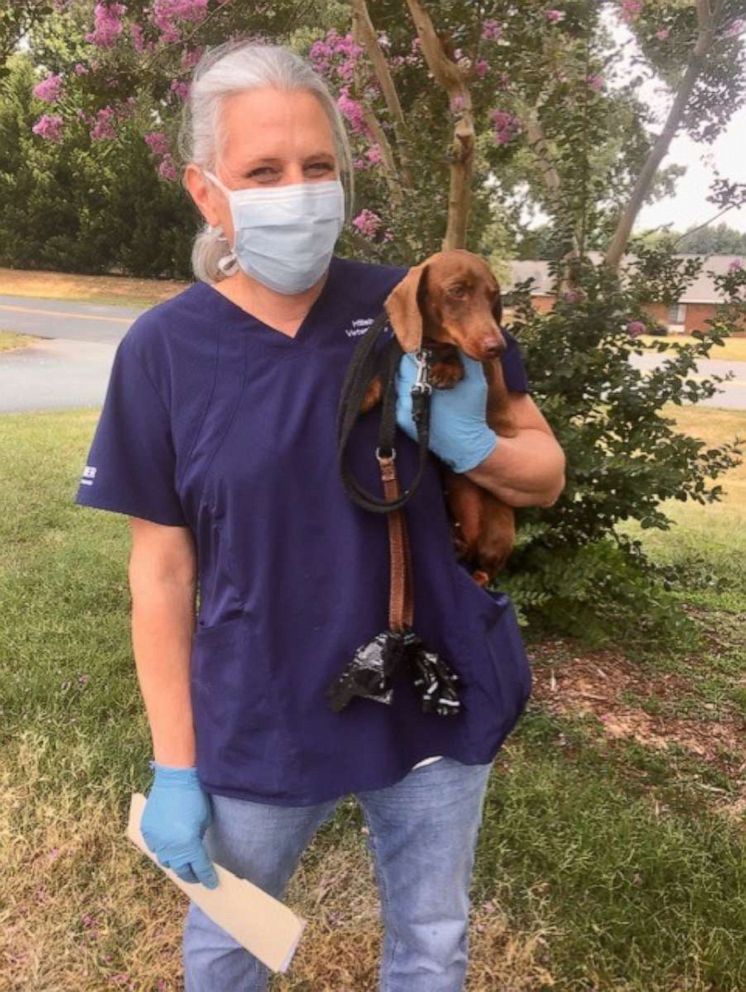 Ellen Steinberg
Nicole Reed was the vet who took care of Pip in North Carolina.

But it would take far more than what the Eilbecks could do to make it happen. After Williams, came Steinberg. Next, a woman named Stacey Green, who took Pip for a few weeks when Steinberg had to travel. There was the vet, Nicole Reed from the Hillsborough Vet Clinic. "Nicole poked, prodded and paperwork-ed all things Pip for months," Steinberg said, readying her to make the journey back to her home in Sydney.

Finally, with the paperwork and medical clearance complete in July -- 18 steps in total -- Pip began her journey home. 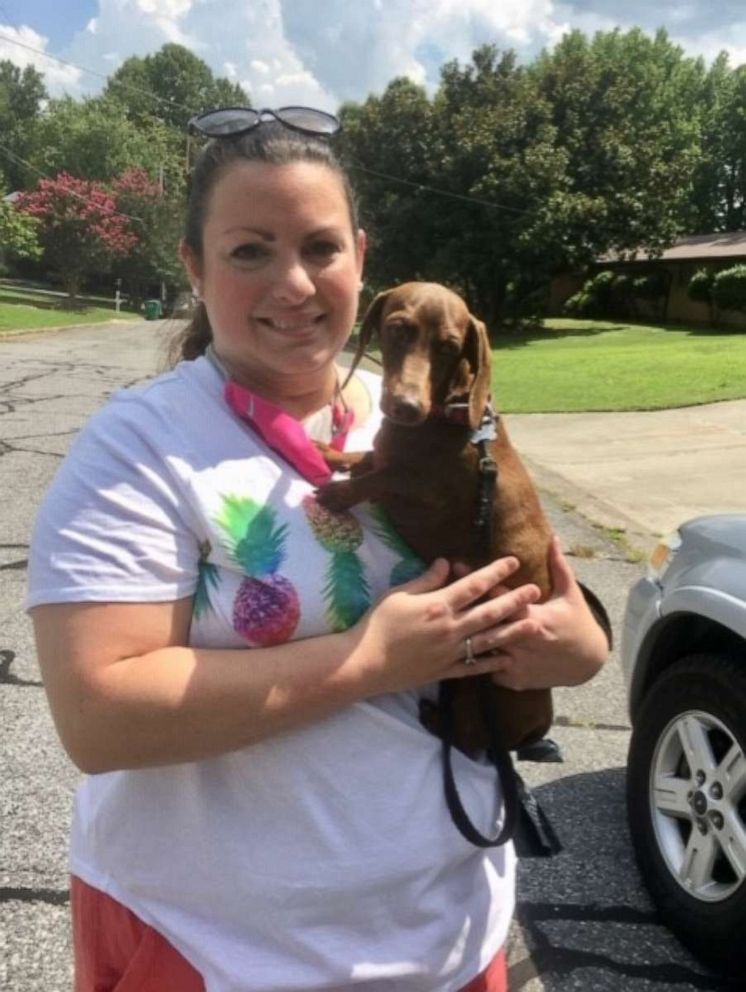 The first part of her trip was getting Pip to Los Angeles. To minimize her time in cargo, Steinberg went on a search for someone willing to fly with her in the cabin. "Who is going to fly across the country at this time?" she said. But that's where Melissa Young, who is on the board of a dachshund rescue group and has three dachshund mixes of her own, stepped in.

"To me she was so brave [to take the risk] during COVID to fly," Zoe Eilbeck said. Young, she said, was a volunteer. She spent the night in LA after her flight and so did Pip. "She lived it up," Eilbeck said.

Then began the hardest part of the trip. "We were extremely worried about her," Eilbeck said. Pip would need to take an 18-hour flight to Auckland with no food or water and be zip-tied in her crate. She stayed in Auckland for a night, then went on to Melbourne, where she would quarantine for ten days before being allowed to board a flight home to Sydney. 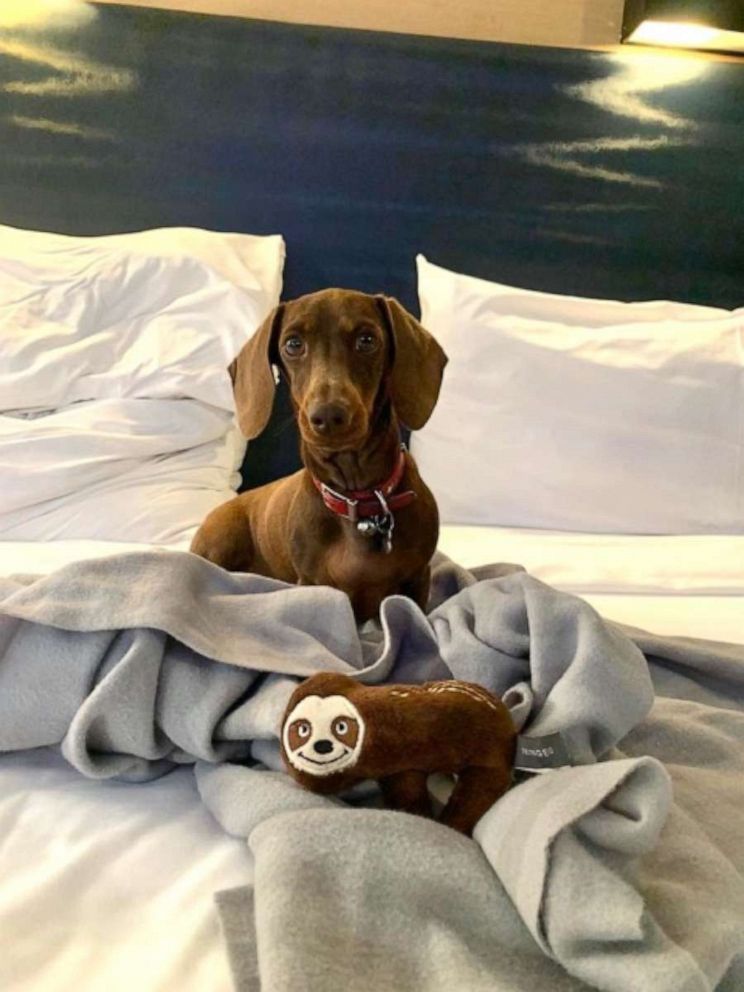 Melissa Young
Pip spent the night in a hotel room in Los Angeles.

Pip was released to Zoe Eilbeck's brother, who lives in Melbourne with his family, on Aug. 3. Because of COVID travel restrictions, the Eilbecks couldn't go to Melbourne to get her. The plan was for Zoe's brother to get Pip and then put her on a flight to Sydney. 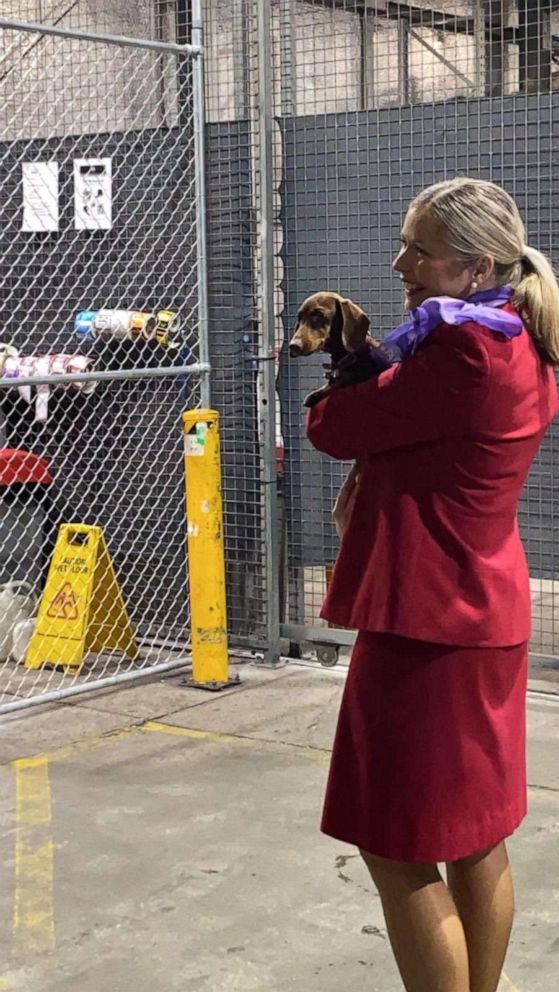 But Pip's flight was canceled and then canceled again. And again. All the while, she waited with her extended family.

And then finally, on Tuesday, after almost five long months, Pip and her family were reunited at Sydney airport. 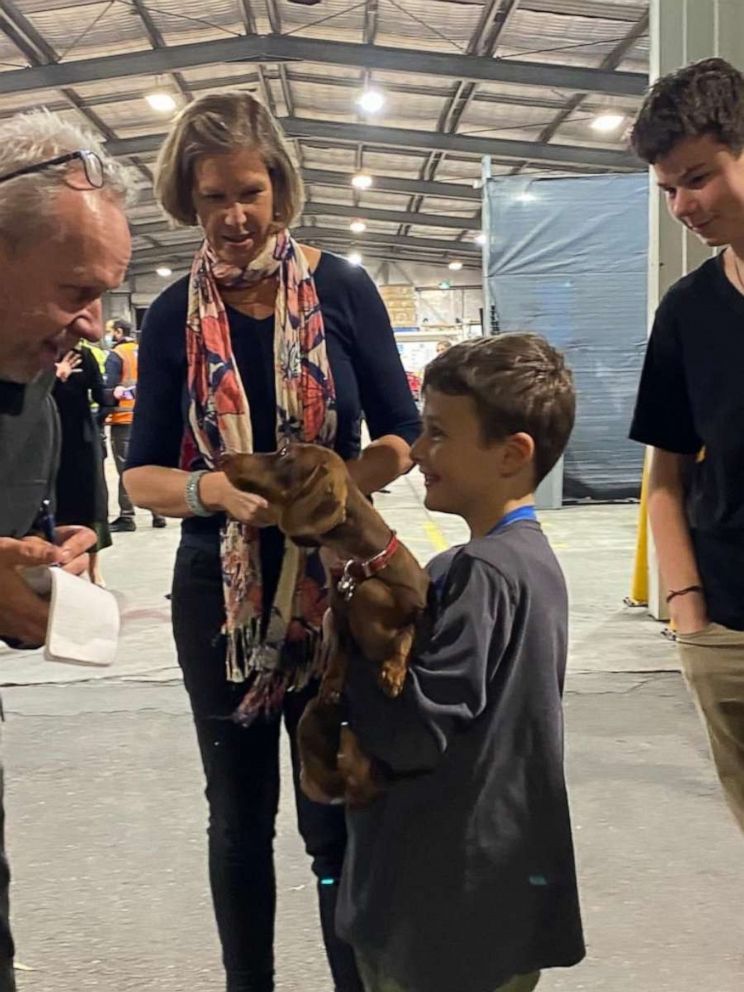 "Every time I tell Pip's story to people, their jaws are hanging open," Steinberg, who Pip's family called the "captain of the relay team." "It required all kinds of people to raise their hand and say 'I'll do it.'"