Chellsie Memmel last competed as a pro gymnast in 2012.

Today, eight years later, she is a 32-year-old mom of two who rediscovered her passion for gymnastics while quarantined in Wisconsin during the coronavirus pandemic.

"I was in the gym more than I ever have been," said Memmel, whose parents own a gym, M & M Gymnastics, in Dousman, Wisconsin. "And I just started practicing more and being in the gym even more."

The experience transformed Memmel, an Olympic silver medalist and three-time World Champion who is now making a gymnastics comeback, with an eye toward possibly competing in the 2021 Olympics in Tokyo. 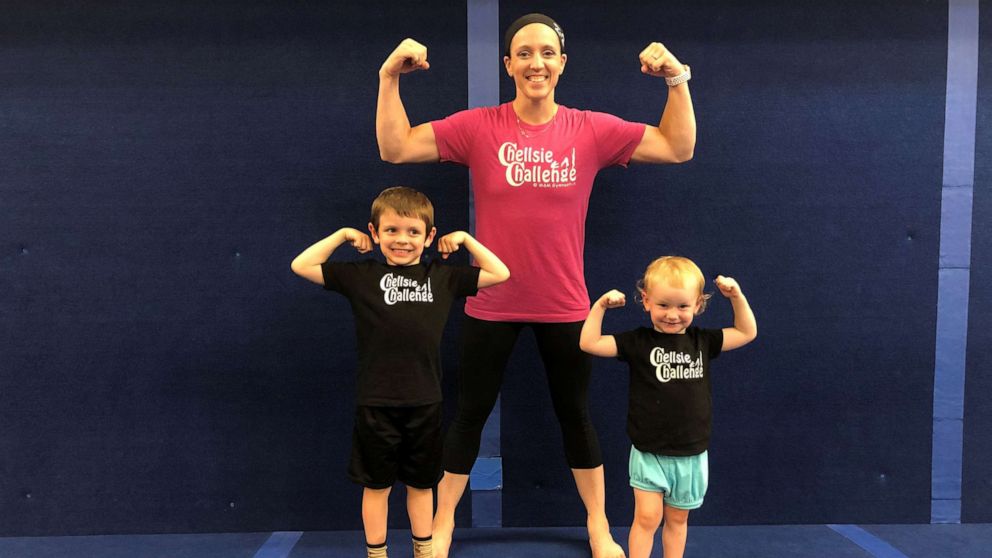 "I haven't said that out loud yet," Memmel told "Good Morning America" about aiming for Tokyo. "My goal is just to see where this takes me. I've committed to training and to try to get to competitions and just to see this where it goes."

MORE: Serena Williams calls post-pregnancy the 'fourth trimester': Why she's right and what women should know

In 2016, for example, the oldest member of the U.S. women's gymnastics team was Aly Raisman, who at 22 was a decade younger than Memmel is today. Russia's Oksana Chusovitina made history that same year as the oldest woman gymnast to ever compete in the Olympic games, at age 41.

Memmel believes she would be the first mother to compete on the U.S. women's gymnastics team. 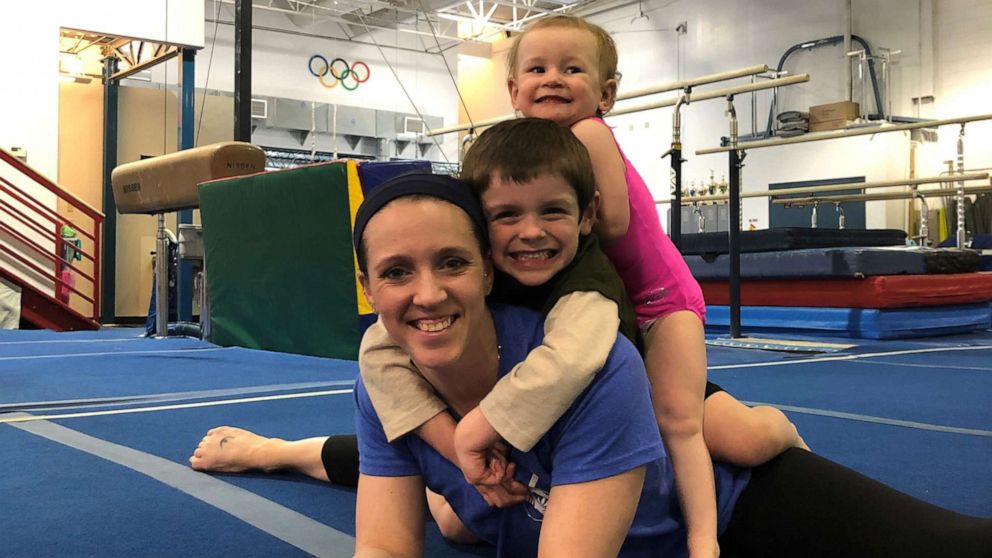 "It's made me a better mom," Memmel said of her revitalized gymnastics career. "When I started doing gymnastics, it lit that fire of something that was a huge part of my life for sure and something that I still love to do."

Memmel retired in 2012 after a series of injuries and after she failed to make the U.S. team for the London Olympics. 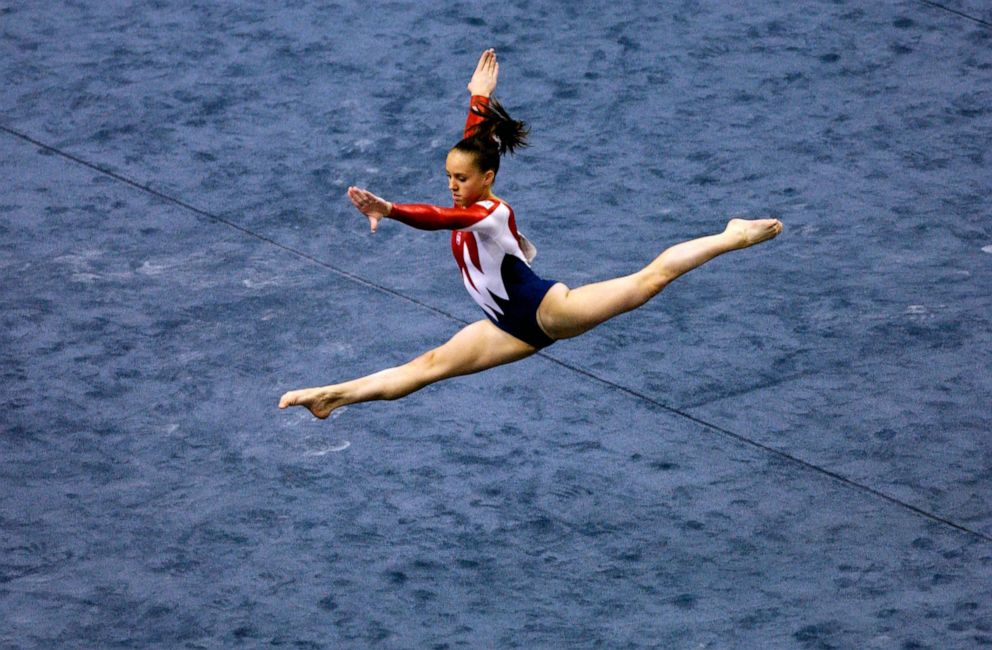 Tim De Waele/Corbis/VCG via Getty Images, FILE
In this Aug. 20, 2003, file photo, Chellsie Memmel leaps during the floor event of the women's team final at the 2003 Gymnastics World Championships, in Anaheim, Calif.

She got married the next year and then had her kids, Dashel, 5, and Audrielle, 2. All the while, she maintained a foot in the gymnastics world through judging and coaching.

It wasn't until two years ago that Memmel decided she wanted to get back in shape after having kids. She started doing "Chellsie Challenges," conditioning workouts that went viral on social media.

"Once I got in better shape I was like, 'I should try flipping and see how that feels,'" she recalled. "I started doing that and just having fun and seeing what I could do and that kind of kept happening."

Memmel now does gymnastics training three days per week and does conditioning on the other days. It's all part of a training plan that she said is both easier on her body and has made her feel stronger than she was even at the peak of her career. 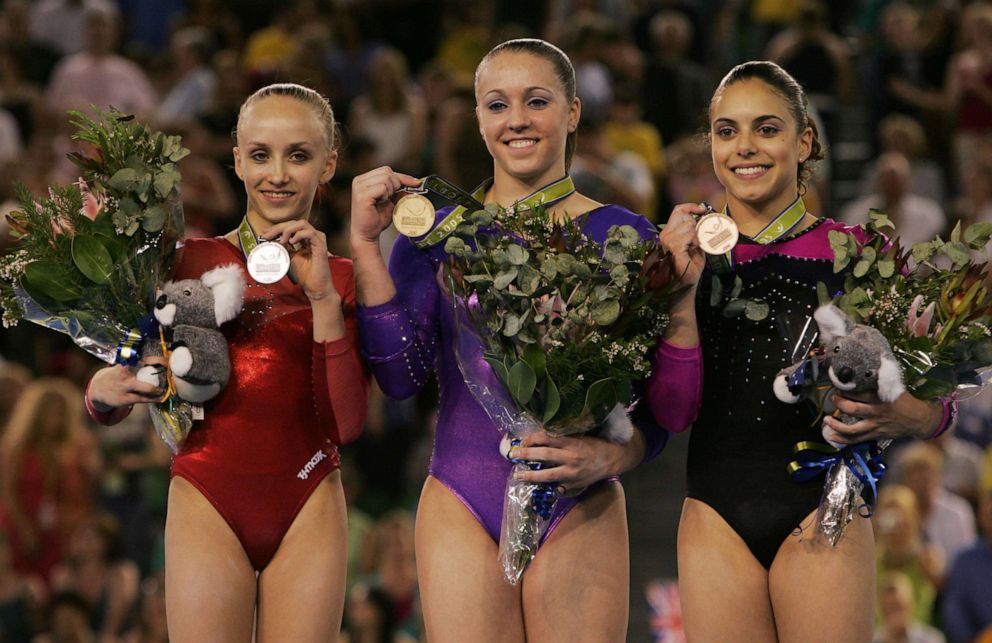 Fairfax Media via Getty Images, FILE
In this Nov. 25, 2005, file photo, Chellsie Memmel (C) and Anastasia Liukin (L) of the US, and Australia's Monette Russo (R), show their medals in the Women's All-Around Finals at the World Gymnastic Championships in Melbourne, Australia.

"Being in shape and maintaining a good level of physical fitness was the hardest part for me when I was younger, the absolute hardest part," she said. "Now my runs feel stronger, some of my jumping just feels more powerful."

Valorie Kondos Field, the former UCLA women's gymnastics coach who led her teams to seven NCAA titles, said Memmel has a level of maturity now that is benefiting her emotionally and physically.

MORE: Watch Simone Biles hit a bull's-eye with an axe

"I think that she has a tremendous chance of making the [Olympic] team, and the reason being is because she's allowed her body to heal so she's actually probably healthier physically than she was when she was at the top of her game during the Olympics," said Field. "What we college coaches have seen is that when gymnasts are mature, they have a second peak in their careers that is actually better then when they're younger." 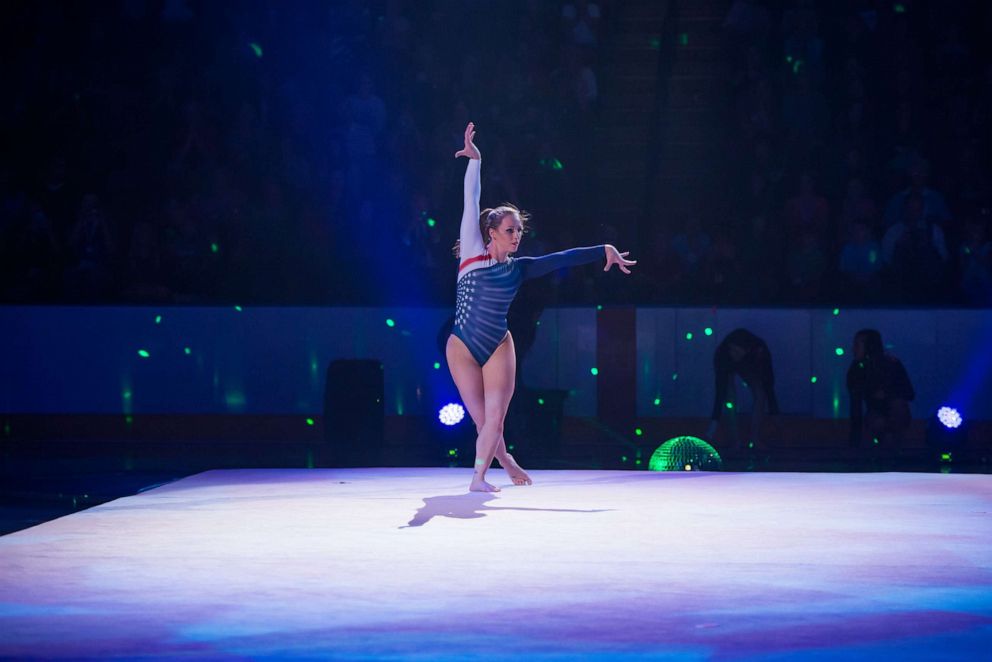 Andrea Hanks/AP, FILE
In this Sept. 27, 2012, file photo, Chellsie Memmel performs a floor routine during the Kellogg's Tour of Gymnastics Champions 2012 at the Maverick Center in West Valley City, Utah.

Memmel, who started doing gymnastics as soon as she could walk because her parents owned a gym, said this is the first time in her career that gymnastics does not have her complete attention. In fact, she started doing conditioning workouts on her own two years ago in part so she could have some "me time" in her day.

"This time around, gymnastics isn't my main focus," said Memmel. "I'm a mom first. My life doesn't solely revolve around it right now."

Memmel's two kids and husband will be by her side in Tokyo if she makes the team. The Olympics were delayed until next summer because of the global coronavirus pandemic.

"The timing for me obviously worked out for the better because there wouldn't have been enough time to get to where I am now and even be thinking about having a shot," said Memmel. "I'm just one person, one sport, but the entire world is going through the same thing, so it's just kind of rolling with it and seeing what happens."

Field said she can already see the country rallying behind a 32-year-old mom of two competing for Olympic gymnastics gold.

"When she thinks about her gymnastics now, it's coming from such a genuine place of her spirit, versus something that she continued doing because she was good at it," said Field. "Imagine having Chellsie to rally behind."