Baby food brand Beech-Nut Nutrition this week announced a voluntary recall of one of its baby food products and said it would stop making the product due to arsenic levels found in some test samples.

The company on Tuesday issued a voluntary recall of one lot of Beech-Nut Stage 1, Single Grain Rice Cereal, according to a statement on its website.

While no illnesses have been reported to date, samples from the cereal tested "above the guidance level for naturally occurring, inorganic arsenic" set by the U.S. Food and Drug Administration (FDA), according to Beech-Nut.

"The safety of infants and children is Beech-Nut's top priority," Jason Jacobs, Beech-Nut's vice president, food safety and quality, said in a statement. "We are issuing this voluntary recall, because we learned through routine sampling by the State of Alaska that a limited quantity of Beech-Nut Single Grain Rice Cereal products had levels of naturally-occurring inorganic arsenic above the FDA guidance level, even though the rice flour used to produce these products tested below the FDA guidance level for inorganic arsenic." 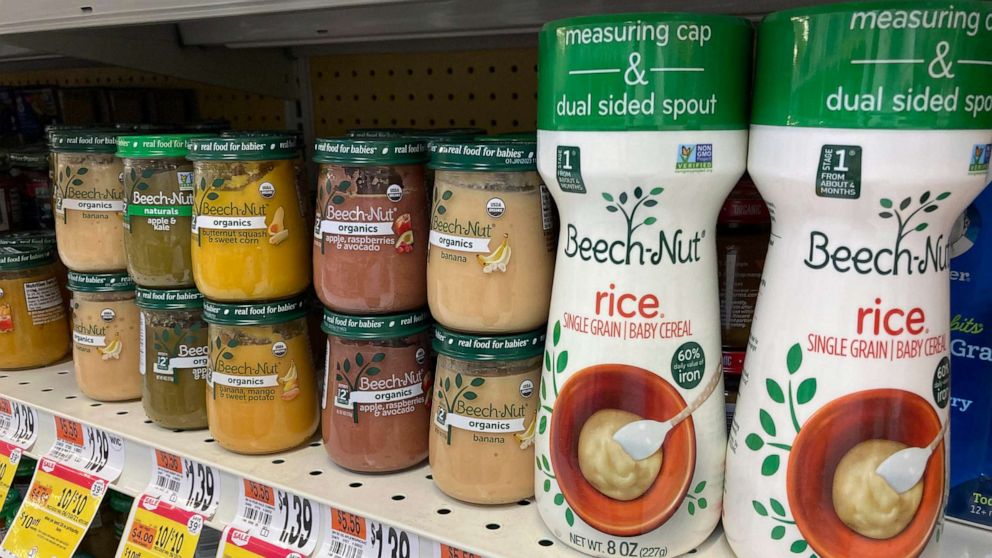 Star Max via AP
Beech-Nut issued a baby rice cereal recall and says it will no longer sell it due to concerns about high arsenic levels.

"Beech-Nut is concerned about the ability to consistently obtain rice flour well-below the FDA guidance level and Beech-Nut specifications for naturally occurring inorganic arsenic," the FDA said in its recall announcement.

The specific Beech-Nut Single Grain Rice item affected by the recall has an expiration date of 01MAY2022 and product codes103470XXXX and 093470XXXX and was sold nationally both in stores and online, according to the company. 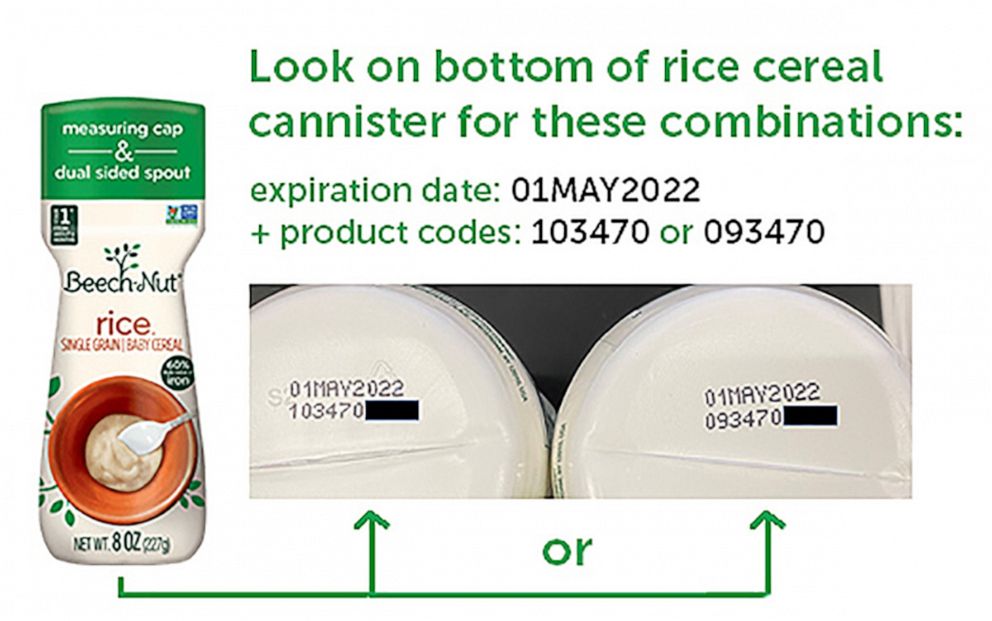 Earlier this year, a congressional report found that some popular baby foods contained "significant" levels of toxic heavy metals that have the potential to harm babies' neurological development.

What parents should know

Exposure to toxic heavy metals poses a specific risk to toddlers and infants because they absorb more than adults and their brains are still developing, according to the National Institutes of Health (NIH).

Diagnosing heavy metal poisoning can also be difficult and symptoms may be easy to miss. Those symptoms include things ranging from dehydration and abdominal pain to changes in behavior, weakened bones, anemia, numbness and weakness and edema, according to the NIH.

Even with those warnings, experts say parents should know that lead toxicity is not uncommon, which is why The American Academy of Pediatrics (AAP) recommends screening for elevated lead levels in all children from ages 9 to 12 months and again around age 2. Heavy metals have been well studied and therapies are available, experts say.

Additionally, experts point out that heavy metals are naturally occurring and can come from a variety of sources. In order to suffer detrimental effects, a person would have to be exposed to toxic heavy metals for a prolonged period of time. A periodic ingestion of the levels found in baby food products would generally not be considered dangerous.

Thursday's report called on parents to be vigilant when it comes to feeding their children, advising them specifically to "avoid baby foods that contain ingredients testing high in toxic heavy metals, such as rice products."

The AAP says parents can take steps to help shield their children from toxic heavy metals, which enter food through water and soil as well as from food manufacturing and packaging.

Parents should serve their kids a variety of healthy foods that are rich in essential nutrients, which can help lower their exposure to metals, according to the AAP.

Rotating the grains children eat can also help since rice "tends to absorb more arsenic from groundwater than other crops," according to the AAP.

Breastfeeding rather than formula feeding can also help reduce exposure to metals, as can checking your water to make sure the lead levels are safe, notes the AAP.

Finally, choosing fish like salmon, cod, whitefish and light tuna that are low in mercury can help, as well as avoiding smoking. Secondhand smoke, from both regular and e-cigarettes, can expose children to metals, according to the AAP.

Parents should be aware that studies have also found toxic heavy metals in organic foods, according to Dr. Darien Sutton, an emergency medicine physician and ABC News medical contributor, who noted the guidelines for reducing exposure to toxic heavy metals can "be difficult for families with low socioeconomic status."