When Christiane Amanpour, chief international anchor for CNN, announced Monday she has been diagnosed with ovarian cancer, she did so with a message to women.

"I'm telling you this in the interest of transparency but, in truth, really, mostly as a shout-out to early diagnosis," Amanpour said on her nightly show on CNN International. "To urge women to educate themselves on this disease, to get all the regular screenings and scans that you can, to always listen to your bodies and of course to ensure that your legitimate medical concerns are not dismissed or diminished.”

Amanpour, who had been off the air for several weeks, shared with viewers that she had a "successful major surgery" to remove the cancer and is now "undergoing several months of chemotherapy for the very best possible long-term prognosis."

Thank you all for your incredible support, I am riding your wave and it will carry me through.#raiseawareness #encourageotherwomen https://t.co/123WA4gKHY

The London-based anchor added that she felt "confident" in her prognosis against ovarian cancer, which is the second most common gynecologic cancer in the United States and the most deadly, according to the U.S. Centers for Disease Control and Prevention (CDC).

What women should know about ovarian cancer

Ovarian cancer originates in the ovaries, which make female hormones and produce eggs, or in the nearby areas of the fallopian tubes and the peritoneum, the tissue that lines your abdominal wall, according to the CDC.

Ovarian cancer can affect females of all ages and races but is most common in women ages 63 and older and is more common in white women than Black women, according to the ACS.

While early signs of ovarian cancer can be vague, the main symptoms are abdominal pain or pelvic pain, bloating and an increase in urination, according to Dr. Jennifer Ashton, ABC News chief medical correspondent and a board-certified OBGYN.

"If these symptoms or others last for more than half the month you want to alert a gynecologist and, again, talk about the fact that it could possibly be ovarian cancer," Ashton said Tuesday on "Good Morning America." 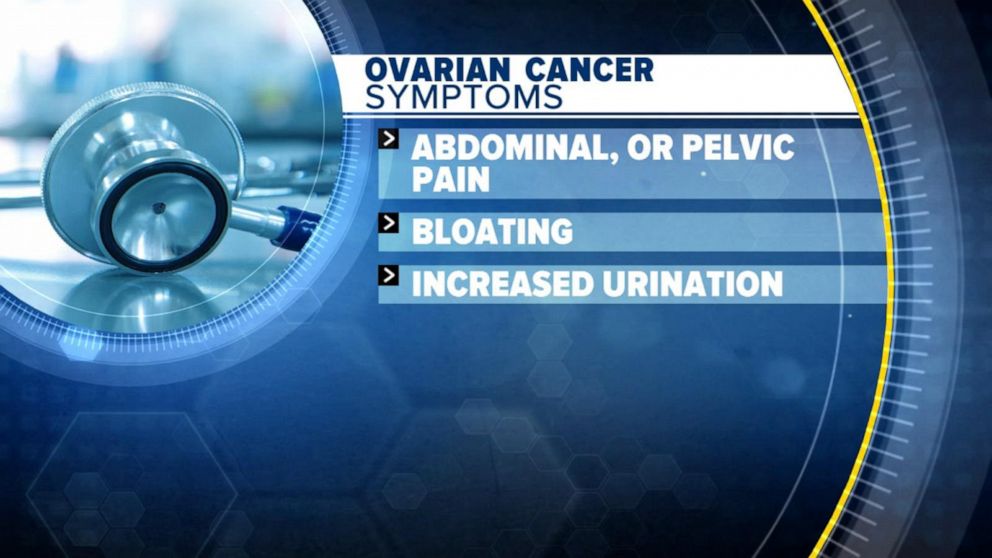 It is particularly important for women to pay attention to symptoms of ovarian cancer and speak openly with their doctor because there is currently no reliable way to screen for the disease, according to Ashton.

In some cases, targeted use of pelvic scans and sonograms or a CA-125 blood test may be used to detect ovarian cancer, but additional testing is "not one size fits all and it is not recommended for all women," explained Ashton.

Treatment for ovarian cancer usually involves a combination of surgery and chemotherapy, according to the CDC, as was the case with Amanpour.

While there is no known way to prevent ovarian cancer, there are things associated with lowering the risk of getting ovarian cancer, including using birth control for five or more years, having given birth, breastfeeding, having had a hysterectomy, having had your ovaries removed and having had a tubal litigation, according to the CDC.