Experts agree climate change is exacting a hefty toll on human health -- from increasing rates of asthma and heat stroke to depression and anxiety. But now, dermatologists are chiming in, too, saying climate change could also impact your skin.

"There are a lot of ways that the skin interacts with the environment," said Dr. Misha Rosenbach, associate professor of dermatology at the University of Pennsylvania and co-founder of the American Academy of Dermatology’s climate change and environmental issues expert resource group.

Your skin is your body's first line of defense against the outside world. Now, some dermatologists are seeing an uptick in some dermatological conditions linked to the burgeoning climate crisis. As the first barrier of protection against different climates, the skin must adjust to these changes, but it can be difficult to adjust to extreme environments.

"As temperatures rise, our skin's ability to adapt to increasing temperatures has its limits," said Dr. Sarah Coates, a pediatric dermatologist and assistant clinical professor of dermatology at the University of California, San Francisco.

Multiple common skin conditions have been linked to climate change. One of them is eczema, a skin condition that can happen at any age and often involves irritating, itchy rashes that can disrupt sleep and overall quality of life. Eczema can flare up due to multiple triggers, including air pollutants.

"It turns out eczema can be exacerbated by wildfire smoke," Rosenbach said. A study published in JAMA Dermatology showed a link between an increase in eczema flares in California during the California Camp Fire in 2018.

Air pollution might also be causing flares in psoriasis and lupus, two different immune system medical conditions that can cause skin rashes.

The air pollution that triggers these flares could make it more difficult to treat these already persistent conditions, some dermatologists say.

Experts also say skin cancer is influenced by changes in climate and could happen more in the future because of it.

"It's warmer in more areas, and so people are outside more, wearing less clothing for most of the year, and that's more sun exposure," Rosenbach explained.

Climate change can also spur infectious disease. Data shows climate change has been contributing to a rise of infections that affect the skin, not only globally but in the United States, which experts say could worsen as the environment changes. This is the result of various factors, including weather changes that affect the vectors that transmit diseases to humans, such as mosquitos and ticks.

Experts say some infectious skin diseases have been occurring during unseasonable times in the U.S., including Lyme disease, according to the U.S. Environmental Protection Agency.

Lyme disease first shows up as a "bull's-eye" rash, but the infection can later manifest into other skin changes.

According to the EPA, new cases of Lyme disease have nearly doubled since 1991, which they label as an indicator of climate change.

Experts say these changes in infectious skin disease patterns are occurring nationwide. The multiple manifestations of climate change -- from air pollution to flooding -- all contribute to skin and overall health across the entire country. Flooding, such as that recently seen in the Southeast and Northwest, can carry pathogens that can damage the skin, Coates said.

"I think you would be very hard pressed to find someplace in the country that is completely unaffected," Rosenbach added.

How to help protect your skin

Experts say there are various things you can do if you experience skin conditions or if they seem to worsen during different weather events. 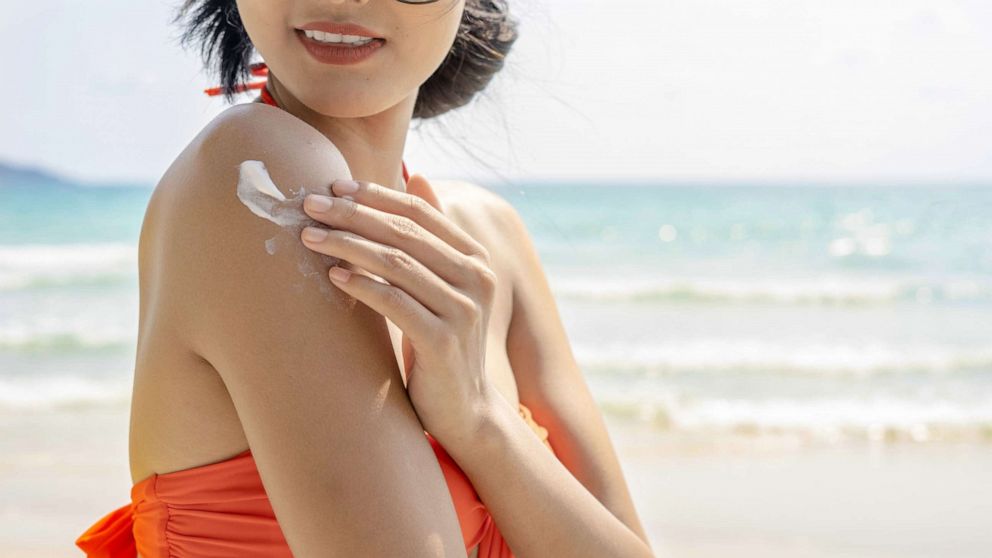 STOCK IMAGE/Getty Images
In this undated file photo, a woman applies sunscreen while spending time at the beach.

Seeing a board-certified dermatologist is key for proper diagnosis and management of the condition, especially during different climates.

"It really depends on the condition that you're talking about," Coates said. "If you have atopic dermatitis (eczema), and you know that wildfire season is approaching, you can be more liberal with your use of moisturizers and emollients that protect your skin barrier from some of the harmful pollutants that can penetrate the skin barrier."

For infectious skin diseases, it depends on the disease and what causes it, but experts say there are still extra measures you can take.

"It's important, when you're hiking outside, to wear long sleeves and to protect yourself from the elements, including mosquitoes and ticks," Coates said, also adding that it's good to stay indoors when it's hot outside.

At COP26, the ongoing U.N. Climate Change Conference in Glasgow, experts are urging nations to take steps to reduce human impact on the environment. They also say everyday people can also make a difference by taking the train rather than flying, buying a hybrid or electric car, or by committing to eating less meat and dairy.

"Climate change is happening to our health," Rosenbach said. "Now we know what we have to do. But it's not just about doing it, it's about how fast we do it."