A college athlete who took time away from her sport to focus on her mental health is speaking out to urge coaches, schools, parents and fellow players to pay attention to the mental health of student-athletes.

"One of my favorite things to tell myself, if I'm not succeeding in the way I want to, I'll put my hands on my heart now to say, 'I love you and I'm listening,'" Cailin Bracken, a sophomore lacrosse player at Vanderbilt University, told "Good Morning America." "And I want people to experience that from their coaches and administrators. I want there to be grace on all ends."

Bracken said of the relationship between parents and kids, "I want for student-athletes and for parents to have an open communication."

Bracken said that as a freshman at Vanderbilt, she struggled with depression after a mid-season concussion, which led her to stepping away from playing on the school’s lacrosse team.

After taking time off from competing, Bracken reentered the sport and now is sharing her story to help others. 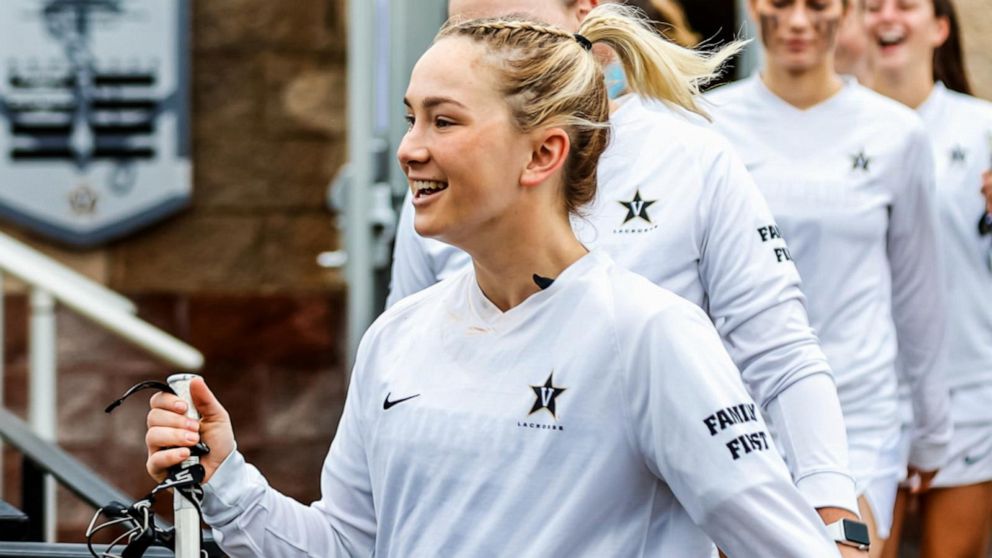 ABCNews.com
VIDEO: Elite athlete opens up about pressure to be the best

Earlier this month, Bracken opened up about her experience in an essay titled, “A Letter to College Sports,” for The Mental Matchup. In it, she describes how college sports can take a toll on student athletes, and how they are met with many expectations from coaches and administrators.

“Playing a sport in college, honestly, feels like playing fruit ninja with a butter knife,” Bracken wrote. “There are watermelons and cantaloupes being flung at you from all different directions, while you’re trying to defend yourself using one of those flimsy cafeteria knives that can’t even seem to spread room-temperature butter.”

“And beyond the chaos and overwhelm of it all, you’ve got coaches and parents and trainers and professors who expect you to come away from the experience unscathed, fruit salad in hand,” she added.

MORE: Ginger Zee on how she overcame the stigma of mental health to talk about suicide, therapy

In her letter, Bracken mentions college athletes like Stanford University soccer star Katie Meyer and Duke University lacrosse player Morgan Rodgers, both of whom died by suicide at the age of 22.

On college campuses in the United States, around 30% of women and 25% of men who are student-athletes report having anxiety, according to data shared by the American College of Sports Medicine (ACSM).

The NCAA found that during the coronavirus pandemic, student-athletes' mental health was even negatively affected, with students reporting stress due to academic concerns, lack of access to their sport, financial worries and COVID-19 health concerns.

Professional athletes like Michael Phelps, Simone Biles and Naomi Osaka have been public in recent years about the pressure, stress and burnout they've faced at the top of their sports, and those are struggles college athletes may feel too.

According to the ACSM, student-athletes face pressures from academics and competing, as well as other stressors like being away home home, traveling for games, feeling isolated from campus and other students due to their focus on sport and adapting to being in the public spotlight.

Bracken said that it is because of the support of her team and coaches that she was able to return to the field, writing, "I was able to navigate my way out of the darkness instead of letting it consume me."

“I want other coaches to just say, 'Hey, how can I be here for you?,' because I never ever want a coach or a parent or teammate to see a situation like Katie Meyer [or] Morgan Rogers and say, 'I wish I had done more,” she told "GMA."

She added that she has been heartened by the response she's received to opening up about her own mental health battle, saying, "I'm so grateful people are listening."

"I had a father reach out to me and telling me that after reading the essay, he drove two-and-a-half hours to his daughter's lacrosse practice and waited outside to give her a hug," said Bracken. "And it was the most beautiful thing, because it's exactly why I wrote it."