Simone Biles is considered one of the greatest female gymnasts of all-time, an athlete who competes on a different level, with four signature moves named after her in three different events.

The level of difficulty undertaken by the six-time Olympic medalist is one reason her decision to withdraw from both the team and individual competitions at the Tokyo Olympics is being applauded by gymnastics experts.

"Gymnastics is a sport where if you make a mistake you can get severely, severely injured," said Valorie Kondos Field, former longtime head coach of the UCLA Women's Gymnastics team. "The worst possible injury you can think of happening can happen in this sport if you lose your focus."

During Tuesday's team competition final, Biles, 24, had planned to do a vault with two-and-a-half twists. Instead, mid-air, Biles lost her way and completed only one-and-a-half twists and stumbled on her landing. 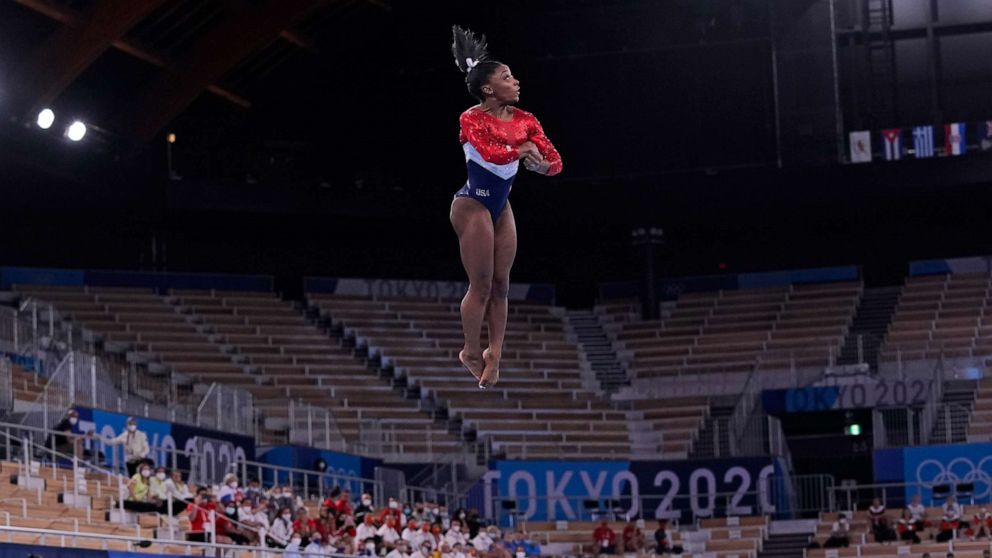 Gregory Bull/AP
Simone Biles, of the U.S. performs on the vault during the artistic gymnastics women's final at the 2020 Summer Olympics, July 27, 2021, in Tokyo. 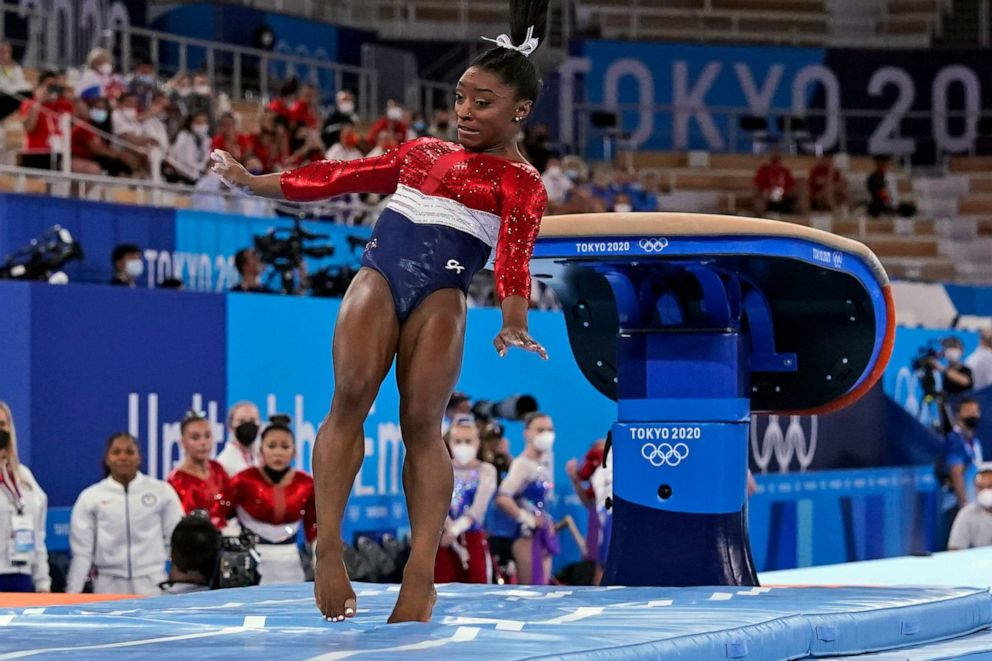 Gregory Bull/AP Photo
Simone Biles, of the United States, lands from the vault during the artistic gymnastics women's final at the 2020 Summer Olympics, Tuesday, July 27, 2021, in Tokyo.

"I had no idea where I was in the air," Biles said in a press conference Tuesday. "I could have hurt myself."

Further explaining her decision, Biles added, "I just felt like it would be a little bit better to take a back seat, work on my mindfulness. I didn't want to risk the team a medal for, kind of, my screw ups, because they've worked way too hard for that." 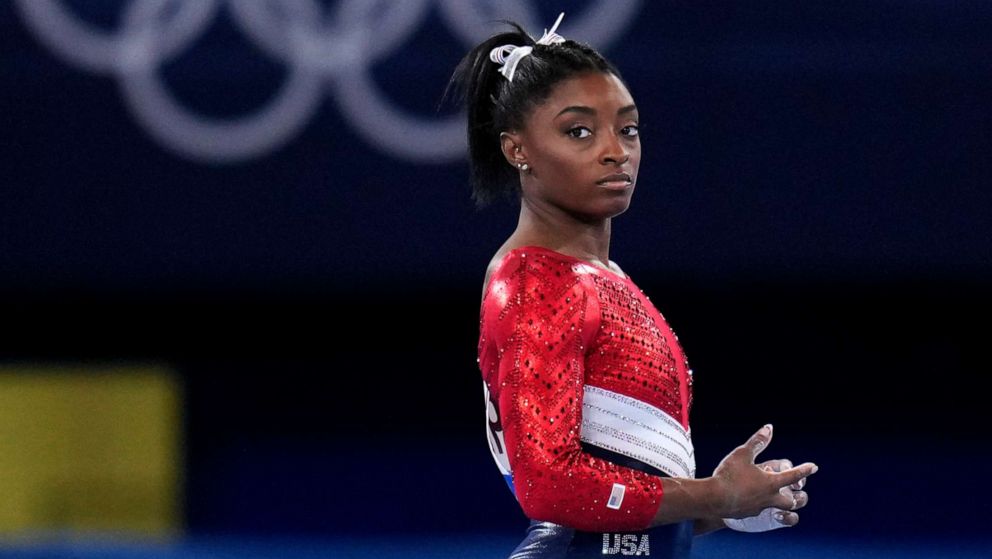 Gregory Bull/AP Photo
Simone Biles, of the United States, waits to perform on the vault during the artistic gymnastics women's final at the 2020 Summer Olympics, Tuesday, July 27, 2021, in Tokyo.

Team USA went on to win a silver medal in the team competition, losing the gold medal to gymnasts from Russia.

On Wednesday, it was announced by USA Gymnastics that Biles would also sit out the individual competition to "focus on her mental health."

"Simone will continue to be evaluated daily to determine whether or not to participate in next week's individual event finals," the sport's national governing body said in a statement. "We wholeheartedly support Simone's decision and applaud her bravery in prioritizing her well-being. Her courage shows, yet again, why she is a role model for so many."

Biles had qualified in all six of the women's gymnastics finals at the Tokyo Olympics -- team, individual all-around, vault, uneven bars, balance beam and floor. She was on track to win an unprecedented six gold medals during the Games, with the aim of becoming the first woman since 1968 to win back-to-back titles in the all-around -- a competition that tests individual gymnasts on each of the four apparatuses.

Dominique Dawes, a four-time Olympic medalist who competed at the 1992, 1996 and 2000 Olympic Games, applauded Biles' decision to put herself first instead of succumbing to pressure and risking physical injury.

"[She] really got lost in the air and if that does happen there is a mental block there and the concern is not only for your mental health but physical health," said Dawes. "And she knew if she was not going to be on her 'A' game, Team USA would not be on top of the podium or maybe even get on the podium."

"What I respect most about her is she's listening to her inner voice and she made a decision that was best for her," she said, adding of her own experience: "During the 2000 Olympic trials I actually quit after [preliminaries]. It was too much on me emotionally; however, I was not able to make that decision. It was very much a controlled atmosphere."

Biles' skill level is so great that the International Gymnastics Federation (FIG) gave the double-double dismount on the balance beam, a signature move by Biles, a lower value because it was considered essentially a safety risk for other gymnasts to try. 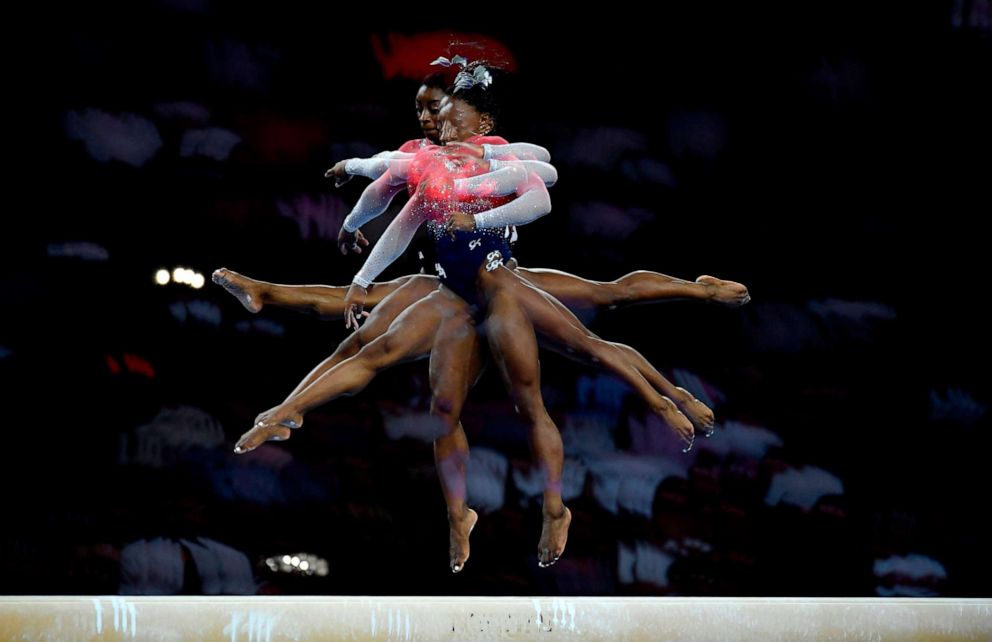 Thomas Kienzle/AFP via Getty Images, FILE
This multi-exposure picture shows USA's Simone Biles performing on the beam during the women's team final at the FIG Artistic Gymnastics World Championships at the Hanns-Martin-Schleyer-Halle in Stuttgart, Germany, Oct. 8, 2019.

"There is added risk in landing of double saltos for Beam dismounts (with/without twists), including a potential landing on the neck. Reinforcing, there are many examples in the Code where decisions have been made to protect the gymnasts and preserve the direction of the discipline," the federation said in a 2019 statement. "The WTC's task is to ensure the safety of all athletes around the world and decisions are not based purely on one gymnast."

Another skill achieved by Biles, the Yurchenko double pike on vault, is considered so dangerous that Biles' coach said the gymnast would have to "beg" her to execute it at the Olympics.

In May, at the 2021 U.S. Classic, Biles became the first woman to ever perform the skill in competition.

Always amazed by you, @Simone_Biles! Keep shining — we're rooting for you! 😍✨

"If she really wants to do it, she's going to have to beg me," Laurent Landi told "On Her Turf" earlier this month. "People seem to forget that it's a very, very dangerous skill … just to have glory and being [in] the Code of Points, it's not enough."

Jacoby Miles, a Washington woman who says she was paralyzed from the chest down due to a gymnastics accident at age 15, took to Instagram to applaud Biles for prioritizing her mental health.

"I experienced those mental blocks throughout my career as a gymnast, and to be quite blunt, it only took one bad time of getting lost in the air in a big flip to break my neck and leave me paralyzed," Miles wrote. "So I'm so, so glad she decided to not continue until she's mentally recovered. Especially at her skill difficulty."

(TLDR: She broke her neck and is now paralyzed.)#SimoneBiles made the smart and correct choice today. pic.twitter.com/EkOeLfgd5J

Jade Carey, a 21-year-old gymnast from Arizona who had the ninth-highest score in qualifications, will compete in Biles' place in the all-around on Thursday, according to USA Gymnastics.

Biles still has the option to compete later this week in the individual finals for vault, uneven bars, balance beam and floor.