Simone Biles will not compete in Thursday's final individual all-around competition at the Tokyo Olympics, a decision that, combined with her withdrawal from Tuesday's team final, has put a spotlight on mental health and the extreme stress elite athletes like Biles are under.

Biles, 24, had qualified in all six of the women's gymnastics finals at the Tokyo Olympics -- team, individual all-around, vault, uneven bars, balance beam and floor. The superstar gymnast was on track to win an unprecedented six gold medals during the Games, with the aim of becoming the first woman since 1968 to win back-to-back titles in the all-around -- a competition that tests individual gymnasts on each of the four apparatuses.

"Simone will continue to be evaluated daily to determine whether or not to participate in next week’s individual event finals," USA Gymnastics said in a statement Wednesday. "We wholeheartedly support Simone’s decision and applaud her bravery in prioritizing her well-being. Her courage shows, yet again, why she is a role model for so many."

Biles left the team competition early Tuesday following a rare stumble on vault. The U.S. women's gymnastics team went on to win a silver medal, with Biles on the sidelines cheering for her teammates.

"I just never felt like this going into a competition before," Biles said at a press conference Tuesday following the team final. "I tried to go out here and have fun, and warm up in the back went a little bit better, but once I came out here I was like, ‘No, mental is not there.’"

"I didn't want to do something silly out there and get injured," she said. "So I thought it was best if these girls took over and did the rest of the job, which they absolutely did." 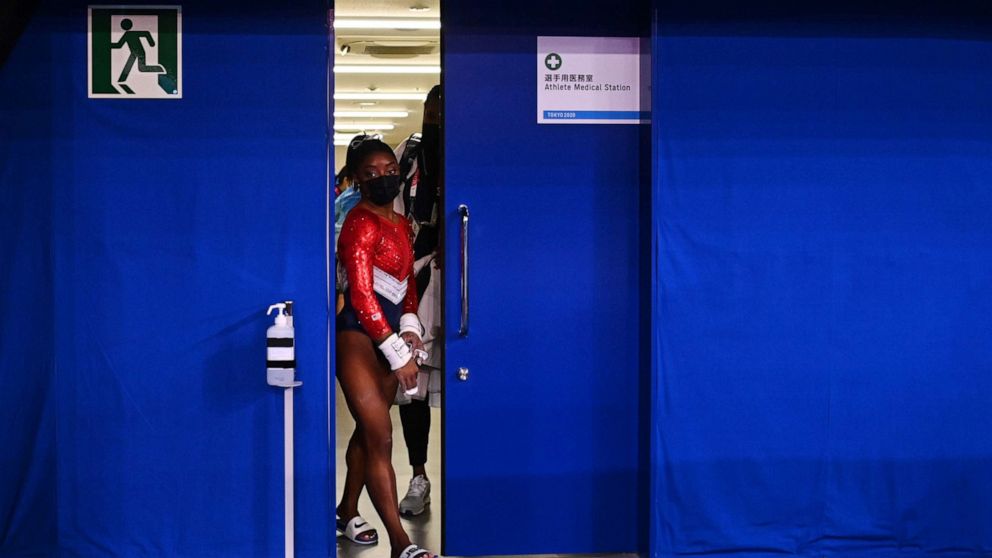 Dylan Martinez/Reuters
Simone Biles of the United States leaves a medical station during the women's gymnastics team final, July 27, 2021, at the 2020 Summer Olympics in Tokyo.

Biles went on to say that this Olympics, her second, has been "really stressful."

The Tokyo Olympics are taking place under strict restrictions due to the coronavirus pandemic, including no fans in the stands and no family members or friends of the athletes allowed to attend. The Games were also postponed one year due to the pandemic.

"I think we’re just a little bit too stressed out," she said. "But we should be out here having fun, and sometimes that’s not the case.”

"I truly do feel like I have the weight of the world on my shoulders at times," Biles posted on Instagram after the qualifying event. "I know I brush it off and make it seem like pressure doesn't affect me but damn sometimes it's hard hahaha! The olympics is no joke!"

Biles' comments on the emotional toll the Olympics have taken on her came as tennis superstar Naomi Osaka was eliminated from the Games after losing a third round match in straight sets.

Osaka, who took a months-long break from tennis due to what she said were mental health struggles, also spoke about the pressure she felt at the Olympics.

"I definitely feel like there was a lot of pressure for this," Osaka said after her loss, adding, "I feel like my attitude wasn't that great because I don't really know how to cope with that pressure, so that's the best that I could have done in this situation."

Earlier this year, another Olympic athlete, Simone Manuel, revealed a burnout diagnosis after a loss at the U.S. Olympic swimming trials, saying her body had, in her words, "completely crashed."

Swimmer Michael Phelps, a 28-time Olympic medalist, has also been open about his mental health struggles, revealing he suffered from depression at even the height of his career.

"I think it's more than a conversation now. I think it's a movement," USA Today sports columnist Christine Brennan said of elite athletes speaking out about mental health. "This is I believe a true movement of some of the top athletes in the world bringing this to everyone's attention."

"And it's not only, of course, helping them but it's helping kids, it's helping others," she said. "These are role models for millions of young people and hopefully they're able to get that message that they can talk about this as well."

Biles' ability to withdraw from Olympics-level competition due to her mental health also appears to represent a change specifically for gymnastics, according to Dominique Dawes, a four-time Olympic medalist who competed at the 1992, 1996 and 2000 Olympic Games.

"What I respect most about her is she's listening to her inner voice and she made a decision that was best for her," said Dawes. "During the 2000 Olympic trials I actually quit after [preliminaries]. It was too much on me emotionally."

"However, I was not able to make that decision," she said. "It was very much a controlled atmosphere."

Dawes said she also noticed at the Tokyo Olympics how Biles went on to cheer on her teammates, calling her "America's biggest cheerleader, and, as a team, the U.S. gymnasts congratulated the Russian gymnasts who went on to win gold.

"I've never seen that before during a competition," she said. "If you look back to my career 25 years ago, we were taught to keep blinders on [and] not communicate. literally with one another many times. let alone our Russian competitors."

"That was definitely a different atmosphere but I think that will be a healthier culture for the sport of gymnastics," added Dawes.

Biles' teammates have also cheered her on amid her mental health struggles.

Sunisa Lee dubbed the silver medal-winning team the "Fighting Four," calling it the, "best team i could’ve asked for."

Another teammate, Jordan Chiles, called Biles her best friend, writing on Instagram, "Words can’t explain how proud I am of you. I LOVE YOU and am literally crying just thinking about everything. WE did this together."

"You don’t just have the weight of America wanting you to win gold, you have infinitely more sponsorships than any other athlete," said Kondos Field. "And then on a personal level you have your team and wanting to do well for your teammates."

"It’s easy for us to put celebrities on that level on a different plane and say, ‘They brought it on themselves. They wanted it all,'" she said. "I hope that we as humans tap into our humanity and understand that all of these Olympians are people. They’re real people with real emotions and real feelings and real pressure." 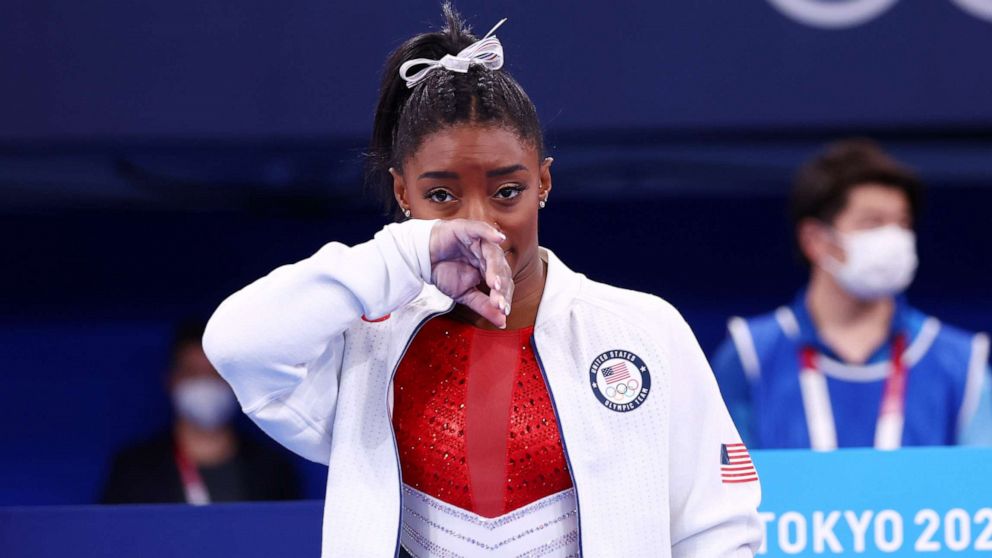 Mike Blake/Reuters
Simone Biles of the United States is seen during the women's team gymnastic finals on July 27, 2021, in Tokyo.

Kondos Field described how different it is for an athlete to experience a mental health issue compared to a physical injury.

"With a physical injury, you can see it and feel it and you know what’s wrong," she said, noting that the adrenaline that comes with physical injuries can also power athletes to continue competing. "With a mental health issue, there’s no X-ray, like with a torn ACL, that can show us what’s going on."

In addition to the pressure of winning gold in Tokyo, Biles has also had a difficult history with the sport of gymnastics.

Biles was one of dozens of gymnasts who spoke out about the rampant sexual abuse by former USA Gymnastics doctor Larry Nassar, who was sentenced in 2018 to up to 175 years in prison.

She told "Good Morning America" in 2018 that she sought out professional therapy and began taking anxiety medicine after speaking out on sexual abuse.

Biles is the only self-identified survivor currently competing in Tokyo.

"With mental stress, the concern I’ve always had is nobody really knows the layers that have compounded to get [an athlete like] Simone Biles to this level," said Kondos Field. "She’s had to compartmentalize so much more than any of us know. It’s not just the game or the stress of being at the top of your game, it’s everything else that we don’t know."

Kondos Field, who went viral in 2019 with a TED Talk titled, "Why winning doesn't always equal success," said Biles should be commended for putting herself and her teammates first by withdrawing from the team competition.

"You’ve got to believe in your team and I know that Simone has always shown support and believed in her teammates," said Kondos Field. "It probably would have been a different result had she competed, but in that moment she didn’t feel that she could, and nobody can question the validity of that. That is her truth."

"It was simply on that given day she felt that her teammates were going to be able to perform better than she could," she said, noting that in gymnastics, competing not at the top of your game can result in severe injury.

Jade Carey, a 21-year-old gymnast from Arizona who had the ninth-highest score in qualifications, will compete in Biles' place in the all-around on Thursday, according to USA Gymnastics.