When Olympic swimmer Simone Manuel revealed a burnout diagnosis after a loss at the U.S. Olympic trials last month, she said it was not just the physical training that led her body to, in her words, "completely crash."

"Being a Black person in America played a part in it," Manuel, who, in 2016, became the first African American woman to win an individual Olympic gold medal in swimming, said about her diagnosis, according to The Associated Press. "This last year for the Black community has been brutal."

What Manuel, who will compete in the Tokyo Olympics later this month, verbalized about being Black in America rang especially true for other Black women.

"It's such a huge problem and issue," said Dr. Blake Banner, a Washington, D.C.-based physical therapist. "[Manuel] speaking out shows us, just regular people in our day-to-day lives, that maybe we're experiencing this."

Banner, 29, said she has faced burnout in her career, noting that it often stems from being the only Black woman in her workplace.

"It just puts this extra pressure on me," she said. "And it's really difficult for me to understand when I am reaching my point where I am burning out because I am always on and I have so many gears running."

Burnout -- the type of extreme stress or fatigue that can lead to everything from respiratory problems to gastrointestinal issues -- is more likely to be experienced by women than men, and more likely to have long-lasting health repercussions for Black women, research shows.

Black women, for example, experience "accelerated biological aging" due to factors like perceived stress and poverty, that makes them an estimated 7 1/2 years biologically older than white women by ages 49 to 55, according to a study published in Human Nature.

Burnout has become more of a recognized issue in recent years, enough so that it is now recognized as a mental health concern by the World Health Organization. But Black women describe it as something that hits differently for them than others.

"If you're just talking about being tired, that's been part of the Black experience forever," said Tiana Clarke, 37, a professor and writer who wrote a viral article two years ago for Buzzfeed, titled, "This Is What Black Burnout Feels Like." "My main point in the article is I don't even know I'm allowed to admit that I'm tired."

5:43
Dr. Jennifer Ashton and Ann Shoket discuss tips to tackle burnout, or a chronic state of stress that leads to physical and emotional exhaustion.

"There's ways that we're all psychologically feeling burnout, but for Black women on a cellular level, this was affecting our blood and affecting our actual life in a more detrimental way than I saw for white people, and the consequences are different," she said. "If we want to talk about burnout and mental health, then we all have different stakes, and especially in the workplace."

Burnout, called an "occupational phenomenon" by the WHO, is described as "resulting from chronic workplace stress that has not been successfully managed."

In addition to the long hours and stress faced by most workers, Black women frequently struggle with the pressure of being "the only," with microaggressions, a lack of opportunities and a pay gap that sees them earn 62 cents to every dollar earned by a white man.

MORE: Feeling burnout? Here are the symptoms and what you can do about it

Outside of work, Black women face health disparities like being twice as likely to die during childbirth or in the months after than white, Asian or Latina women, according to the U.S. Centers for Disease Control and Prevention and the coronavirus pandemic, which disproportionately impacted people of color. And they face the added stress of daily racial unrest, as the United States experienced last year after the killing of George Floyd.

"When there's a police brutality incident, you can't call out of work. If you have a white boss, how do you tell your boss I'm having a difficult time at work today or I need to work from home?" said Clark. "You have to wear the mask that everything is OK because you don't want to lose your job."

Clark said she recalled in her career the differences that came with being the only Black woman in the room, like the commotion caused if she simply wore her hair natural.

"That became the topic of the day, like, 'Oh my God, Tiana, your hair,'" she said. "And I'd have people stopping by my desk and wanting to talk about my hair all day long."

Those types of interactions play a part in why, over the course of the coronavirus pandemic, Black employees who were able to work from home often felt more comfortable. Absent from their own home has been the code-switching Black women often must do to navigate interracial interactions at work, noted Clark.

Among employees working remotely during the pandemic, Black workers reported a 64% increase in their ability to manage stress and a 50% increase in their sense of belonging at work while working from home, according to data released by Future Forum, a research consortium launched last year by Slack.

"I can totally understand how for Black women it has felt more protective to be at home," she said. "I hope more and more that companies and bosses are made aware of the nuances of how stressors in the workplace can affect Black women. I hope that more boardrooms and bosses become more diverse."

'Black women cannot afford to not take care of themselves'

Though the stakes can seem high when it comes to advocating for yourself as a Black woman and slowing down, Clark said it must be done.

"The Black women in my family have always worked two or three jobs so I come from that lineage," she said. "But for me, my article was a really big turning point for myself. I think I had to admit some things to myself and things kind of had to blow up in my own life and I had to hit pause and I had a radical change."

In the case of Manuel, she said she had to stop training for the Olympics and stay out of the pool for three weeks in order to let her body rest after her burnout diagnosis.

The Olympian's physical symptoms that led up to that point included increased heart rate, fatigue, insomnia, depression, anxiety, muscle soreness, isolation and decreased appetite, according to The Associated Press. 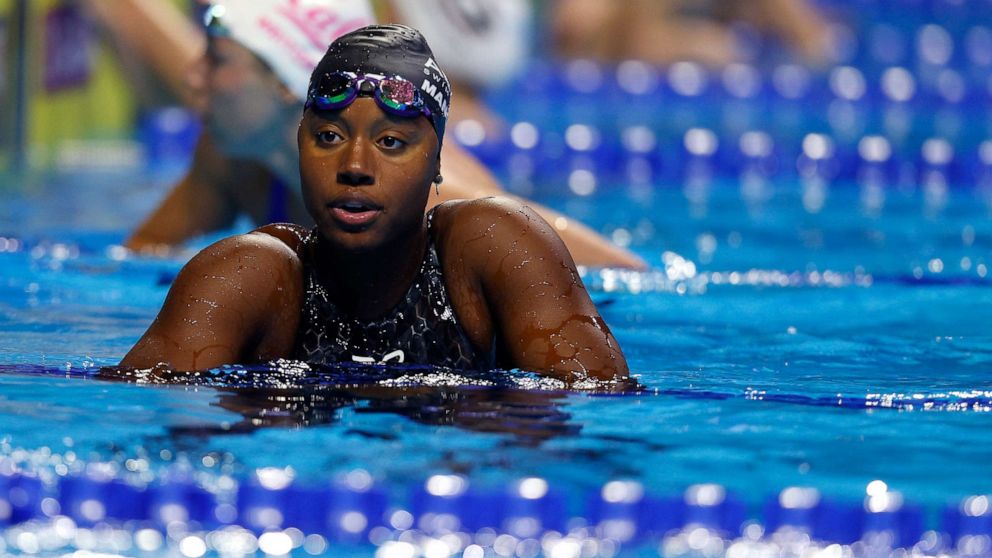 Other signs of burnout, according to the WHO, can include increased mental distance from one's job, feelings of negativism or cynicism related to one's job and reduced professional efficacy.

"We all have a bad day, sometimes even a bad week, but if it's a bad month, something is going on," said Farah Harris, a Chicago-based psychotherapist and workplace well-being expert. "As a clinician, what we're looking for is the frequency and the duration, then we need to pause and say there's a flag here. We need to pay attention."

Harris noted that even being diagnosed with burnout can be difficult for Black women because the diagnostic codes used for mental health disorders were not created with them in mind.

"The way that depression and burnout looks like for Black women is not necessarily the same as it looks for a white woman or a white man or even an Asian woman," she said. "For Black women, it may be presenting as a headache or a stomachache and not talking about the underlying issues."

MORE: Work-place burnout is now officially a recognized mental health concern: What you should know

Two keys to preventing burnout are to notice the signs early, and to develop skills that can be put into practice when rough patches emerge, according to Harris.

"Be preventative and proactive so when the difficulties of life come and stresses come, you're able to manage them better," she said, noting that helpful practices include mindfulness, being fully present, practicing self-care and, importantly, advocating for yourself.

"When you use your voice, you're self-advocating and it also helps you to ask for help, which is not a word or action that Black woman are comfortable in general doing, because, again, we have to be strong," explained Harris. "Use your voice to say, 'This isn't right. I don't like this,' or, 'I need help,' or, 'I need a break.'"

Most importantly, Harris added, "Don't wait until you have full burnout to seek help."