April 11-17, 2022, is Black Maternal Health Week, a time to put a spotlight on and have a national conversation about Black maternal health in the U.S., according to Black Mamas Matter Alliance, a nonprofit organization that founded the initiative five years ago.

Naomi, a 37-year-old Black woman from Portland, Oregon, will have a doula by her side when she gives birth to her seventh child, a daughter, later this month.

By using a doula -- a trained professional who provides support to moms before, during and after childbirth -- Naomi is part of a growing trend of Black women who see having a doula, particularly a Black doula, as a potentially lifesaving advocate during birth.

"I know the intensity of what's happening can lead to a lot of complications," Naomi, who asked that only her first name be used, told "Good Morning America." "When you're tapped out because you're having contractions that take your breath away, you want someone who can step in and knows what to do and knows what you want."

As a Black woman in the U.S. -- which continues to have the highest rate of maternal mortality among developed nations -- Naomi is more than twice as likely to die during childbirth or in the months after than white, Asian or Latina women, according to the U.S. Centers for Disease Control and Prevention (CDC).

Black women like Naomi are also more likely than white, Asian or Latina women to die from pregnancy-related complications regardless of their education level or their income, data shows.

Naomi said she only learned about doulas eight years ago, when she was pregnant with her sixth child and needed someone to be a support person in the delivery room. She was able to access a doula free of cost thanks to a local nonprofit organization, Black Parent Initiative (BPI), that matches Black women with Black doulas in hopes of improving their odds during pregnancy and delivery. 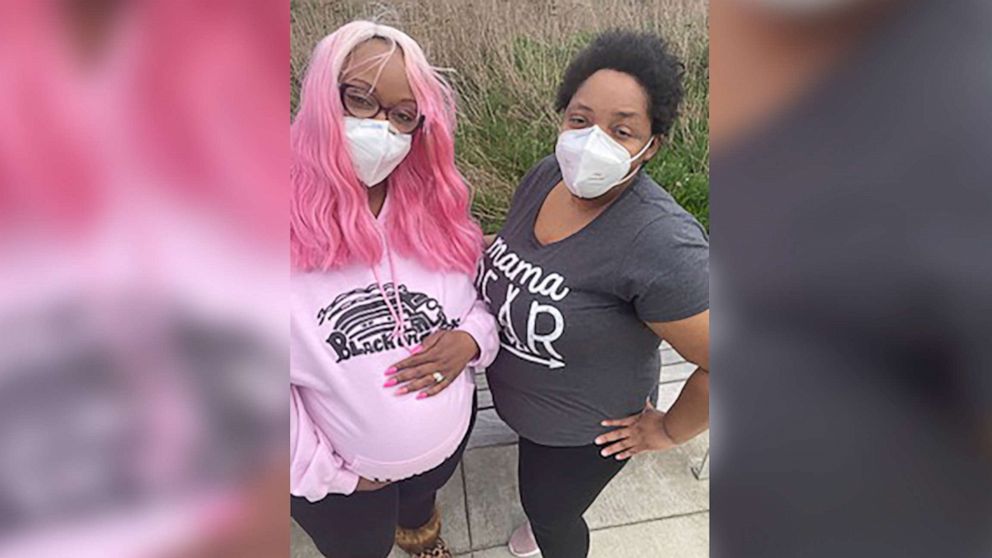 "All those times I gave birth, I wish I would have had a doula," said Naomi, who had her first child in her late teens. "I wish it was available 20 years ago like it is now."

Linda Bryant-Daaka, a labor and postpartum doula and manager BPI's doula program, said interest in the program has increased every year since its founding in 2016, and especially during the past year of the coronavirus pandemic, which both disproportionately impacted Black people and put a glaring spotlight on racial disparities in health care.

"What we've heard from women is that there was so much stress around the pandemic and they had so many family members pass away, they now want to use these services," said Bryant-Daaka. "And they want someone who has that shared, common background or lived experience as them."

Why Black women die at a higher rate than any other race during childbirth is the result of a web of factors, experts say.

Pregnancy-related deaths are defined as the death of a woman during pregnancy or within a year of the end of pregnancy from pregnancy complications, a chain of events initiated by pregnancy or the aggravation of an unrelated condition by the physiological effects of pregnancy, according to the CDC.

One reason for the disparity is that more Black women of childbearing age have chronic diseases, such as high blood pressure and diabetes, which increases the risk of pregnancy-related complications like preeclampsia and possibly the need for emergency C-sections, according to the CDC.

But there are socioeconomic circumstances and structural inequities that put Black women at greater risk for those chronic conditions, data shows. And Black women often have inadequate access to care throughout pregnancy which can further complicate their conditions, according to a 2013 study published in the American Journal of Obstetrics and Gynecology.

Anecdotal reports also show that the concerns of Black women experiencing negative symptoms during pregnancy and postpartum are specifically ignored by some physicians until the woman's conditions significantly worsen, at which point it may be too late to prevent a deadlier outcome.

That is where doulas come in, according to Tracie Collins, a doula and CEO and founder of the National Black Doulas Association (NBDA), a nonprofit organization that connects Black birthing families with Black doulas.

"Black women hire doulas because they want to make sure that they live," said Collins. "It's not a status quo for us."

Dr. Ashanda Saint Jean, a board-certified OBGYN and chair of OBGYN for the Health Alliance Hospitals and Westchester Center Medical Health Network in New York, notes that doulas are a source of non-medical support for pregnant women before, during and after childbirth.

"A doula is a support person who has been trained and educated in labor and delivery," said Saint Jean. "I've had a number of Black patients feel that having a doula is an extra layer of support where they're able to more ask questions about their birthing experience and explore all measures to ensure a healthy outcome."

In Naomi's experience, she and her doula created a birthing plan so that Naomi's doctors and partner would know what she wanted, and the doula made sure the plan was executed during labor.

With a doula, I can relax and focus on labor

"With a doula, I can relax and focus on labor," said Naomi. "She can even tell my partner things like, 'Rub her back right here.'"

"Our health literacy is poor across the board, and then when you add racism on top of that, it just creates another layer," she said. "That's what we're doing with the doula, we're trying to attack that health literacy piece that really affects outcomes." 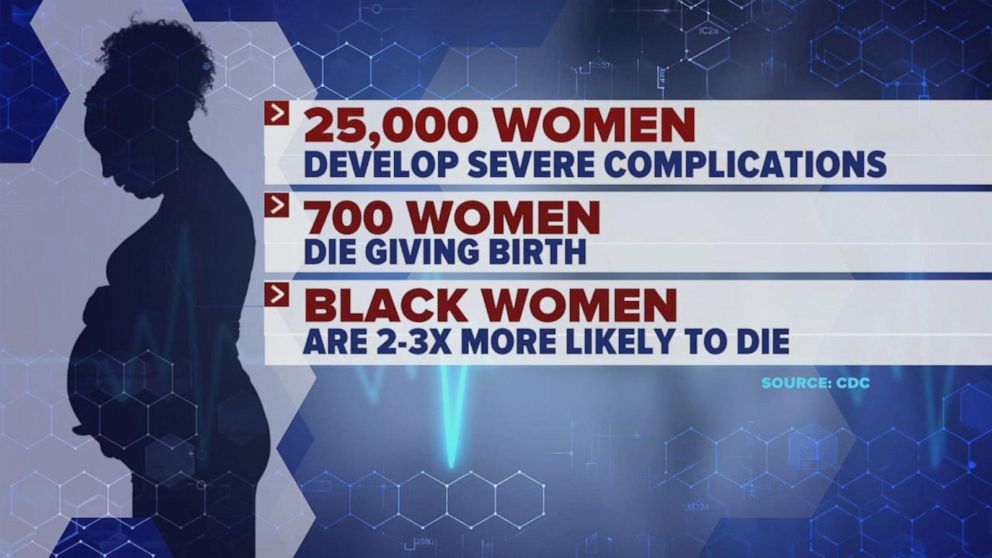 ABC
Around 700 women die as a result of pregnancy or delivery complications in the U.S. each year, according to the CDC.

Studies show that continued support like doulas for pregnant women can help reduce the rate of C-sections, which are higher among Black women.

The postpartum care offered by doulas also helps to increase the rates of breastfeeding, which improves health outcomes for new moms and babies, and decreases the rates of postpartum complications, like blood clotting and blood hemorrhaging, both of which impact Black postpartum women, data shows.

It takes a village not only to raise a child, but also to give birth

"It takes a village not only to raise a child, but also to give birth," said Devane-Johnson. "What we're trying to accomplish here is to create the village to support Black mothers."

An effort to get more Black doulas for Black women

Devane-Johnson and McMillian-Bohler are among the health experts leading the fight to get more Black doulas trained to meet the need of expectant Black women.

They and other experts point to the issue of racial bias in medicine and say it is critical to have doulas who understand and share the same lived experiences as their clients.

"It gives them a sense of comfort," she said.

Venus Standard, assistant clinical professor in the University of North Carolina-Chapel Hill's School of Medicine's department of family medicine, recently received a $75,000 grant to train Black doulas, a program she is working on alongside Devane-Johnson and McMillian-Bohler.

The funding will allow the trio to recruit and train 20 Black women to earn doula certification -- which can cost hundreds of dollars and is often a barrier to entry for Black women -- and also provide business and marketing seminars to "help the newly-trained doulas establish viable businesses," according to UNC.

"There's a lack of trust in within the Black community toward the medical community," said Standard. "There is a better trust value when [a Black pregnant woman] knows that you're going to give them accurate information and information that's needed for them and their particular situation, especially if her provider team does not look like her."

McMillian-Bohler pointed out the trust factor between doulas and patients is especially important because the birthing process is so personal.

"You think about someone being in your intimate space, being with you in your home and potentially coming to the hospital and and sitting in a room with you for 20 hours," she said. "It can be a hard sell so that's why this grant is so important and projects like this are important, so that not only do people know doulas are out there, but that we're growing the body of doulas that look like the people we are caring for."

A help, but not a complete solution to the maternal mortality crisis

Health care providers who are on the front lines of helping Black pregnant women describe a heartbreaking situation of watching women live in fear during what it supposed to be a joyous time.

"I cannot have another Black patient come to me and say, 'I'm scared I'm going to die having this baby,'" said Saint Jean, the OBGYN in New York. "It breaks my heart that in 2021 we still have women in the United States afraid that they will die in childbirth."

And while having a doula is helpful for Black mothers, it is not a cure-all for the maternal mortality crisis in the U.S., experts say.

For one, doulas can cost upwards of $1,000 per birth. While there are efforts to have doulas funded by Medicaid and more insurance plans and there are initiatives like the Black Parent Initiative (BPI) in Oregon that offers doulas free of charge, the access is not equal, according to BPI's Bryant-Daaka. 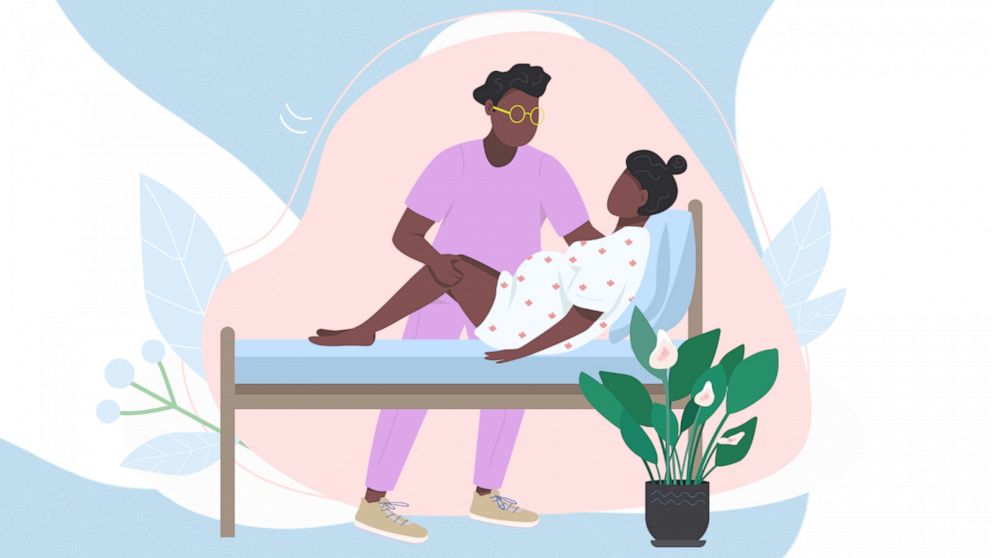 "Everyone should be able to have a doula, no matter what the cost is," she said. "If we know that these services are helpful and are going to save lives and reduce cost on the backend, why would you not want them offered to women who are giving birth?"

Having doulas present is also not going to eliminate all of the underlying issues that put Black pregnant women in more danger, according to McMillian-Bohler.

"Black doulas are not going to fix the oppression and discrimination and those things that are still happening," she said. "Because what you hear [from Black women] that's very consistent is, 'I don't feel heard, 'I'm not listened to;' 'I don't feel comfortable explaining how I'm feeling because I'm not taken as seriously as someone else.'"

Editor's note: This story was originally published on April 13, 2021.