It was no surprise when Simone Biles landed two new historic gymnastics moves at the 2019 Gymnastics World Championship in Stuttgart, Germany, both of which are set to be named after her.

Biles, who already has two other skills named after her on the vault and floor apparatus, will now add two more to the list: the double-double dismount on the balance beam and triple-double on floor.

"Both elements are set to be named after her in the FIG Code of Points following official review," the International Gymnastics Federation (FIG) said in a press release.

There you have it, folks! 👇 @Simone_Biles successfully landed her signature double-double dismount on beam today and the element will be named the "Biles" from now on. #Stuttgart2019 pic.twitter.com/BO38BaCQ8g

But before competition even began, controversy ensued when FIG announced that Biles' beam dismount would be valued as an "H," when it had been widely expected that a skill of such difficulty would be valued higher, as an "I" or a "J."

In gymnastics each skill corresponds to a letter which has a numerical value. For example an "A" is worth a tenth of a point. Each letter thereafter is worth an additional tenth. Had Biles’ beam dismount been awarded a "J," that skill would have been valued as a full point. 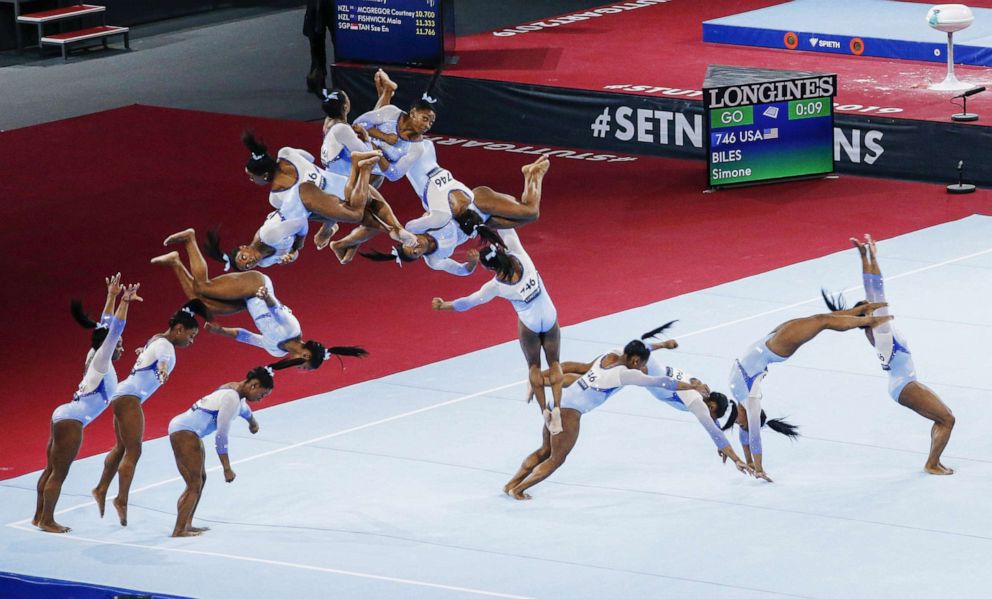 Kyodo via Newscom
Composite photo shows Simone Biles of the United States executing a triple double composed of a double backflip with three twists on the floor exercise during the women's qualifications at the artistic world championships in Stuttgart, Germany, on Oct. 5, 2019.
(MORE: Simone Biles makes history at world championships after nailing 2 signature moves)

When questioned why FIG decided to give the dismount what was considered to be a lower value, the federation released a statement, essentially calling the skill a safety risk for other gymnasts to try.

"In assigning values to the new elements, the WTC takes into consideration many different aspects; the risk, the safety of the gymnasts and the technical direction of the discipline," the statement read.

"There is added risk in landing of double saltos for Beam dismounts (with/without twists), including a potential landing on the neck. Reinforcing, there are many examples in the Code where decisions have been made to protect the gymnasts and preserve the direction of the discipline," the statement continued. "The WTC’s task is to ensure the safety of all athletes around the world and decisions are not based purely on one gymnast." 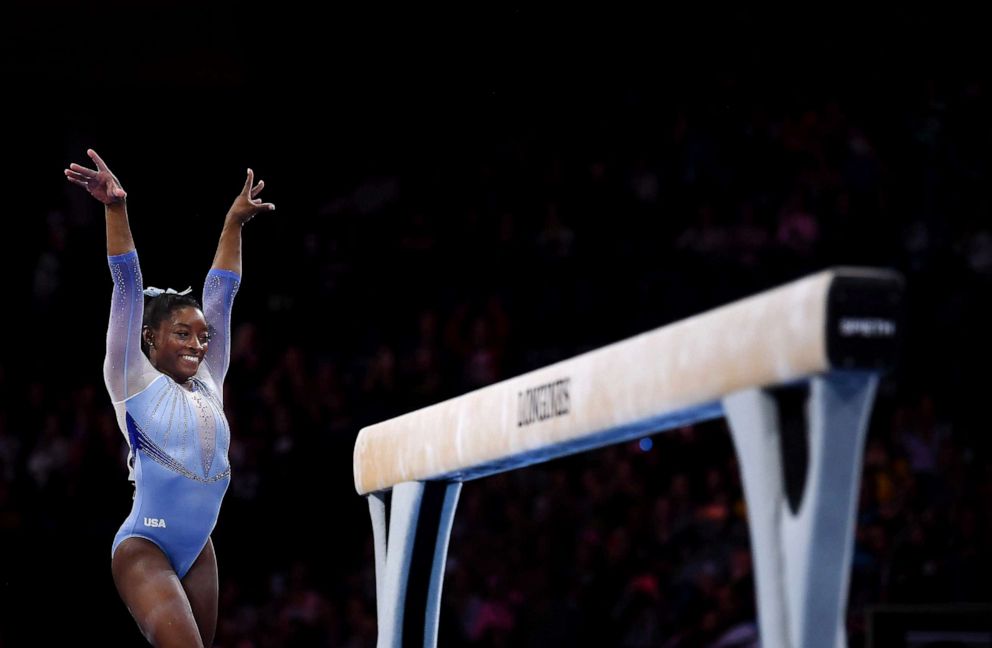 The backlash from Biles' camp after FIG’s value was announced was swift, with Biles tweeting out that the ruling was "bulls--t." Her coach, Cecile Landi, tweeted the decision was "#totalbs."

"If it were [a gymnast from] another country trying it, it would definitely be a J. But because it’s me, it’s so unfair, because, am I in a league of my own? Yes, but that doesn’t mean you can’t credit me for what I’m doing," Biles said in an interview with NBC Sports. "They keep asking us to do more difficulty and to give more artistry, give more harder skills. So we do, and then they don’t credit it, and I don’t think that’s fair. They keep asking for more, we give them more and they don’t credit it. So what’s the point of even asking? If you’re going to give it an H, nobody’s going to try it. But if you give it a J, not saying people will try it more, but at least it makes sense to try it because it’s something to shoot for."

Dominique Dawes, a member of the “Magnificent Seven” U.S. women's gymnastics team that won gold at the 1996 Atlanta Games, said Biles is "very right" in arguing against FIG's value.

"What she’s doing does classify to be a much higher level of difficulty than what it’s currently labeled as," Dawes said Tuesday on ABC News' "The Briefing Room." "She’s ahead of her time. They don’t know how to handle what she’s doing."

When asked about FIG calling the skill a safety risk for other gymnasts to try, Dawes replied, "People won’t be taking that risk because they’re not capable of doing it these days. Only Simone Biles is."

Regardless of the value of the dismount, Biles is consistently beating out every other gymnast in the world by points, not tenths.

Team USA competes in the team finals on Tuesday and individual all-around finals -- where Biles is a massive favorite -- are on Thursday.