The delta variant that caused a surge in COVID-19 cases in the United States this summer is particularly dangerous for pregnant people, new research shows.

Pregnant people infected with the delta variant are more likely to have severe COVID-19 cases, and the variant leads to even worse outcomes for unvaccinated pregnant people, according to research published in the American Journal of Obstetrics and Gynecology, a medical journal.

Nearly two dozen pregnant people died of COVID-19 in August alone, according to the U.S. Centers for Disease Control and Prevention.

Currently, only 31% of pregnant people in the U.S. have been vaccinated against the virus, and that number drops down to 15% for Black pregnant people, according to the CDC.

The agency last week issued an "urgent health advisory" calling on pregnant people and people who were recently pregnant or are trying to get pregnant to get vaccinated against COVID-19, noting the virus causes a two-fold risk of admission into intensive care and a 70% increased risk of death for pregnant people.

The CDC's advisory was too late to help some families who are watching their loved ones fight COVID-19 after contracting it during pregnancy.

Autumn Carver, a 34-year-old mom of three in Indiana, has been hospitalized since late August, when she contracted COVID while 33 weeks pregnant, according to her husband, who said his wife was not vaccinated.

"We have had three miscarriages and saw a risk for us and we got advice not to get the vaccine," said Zach Carver, who shares updates about his wife on Facebook. "She made the decision and I supported her 100%." 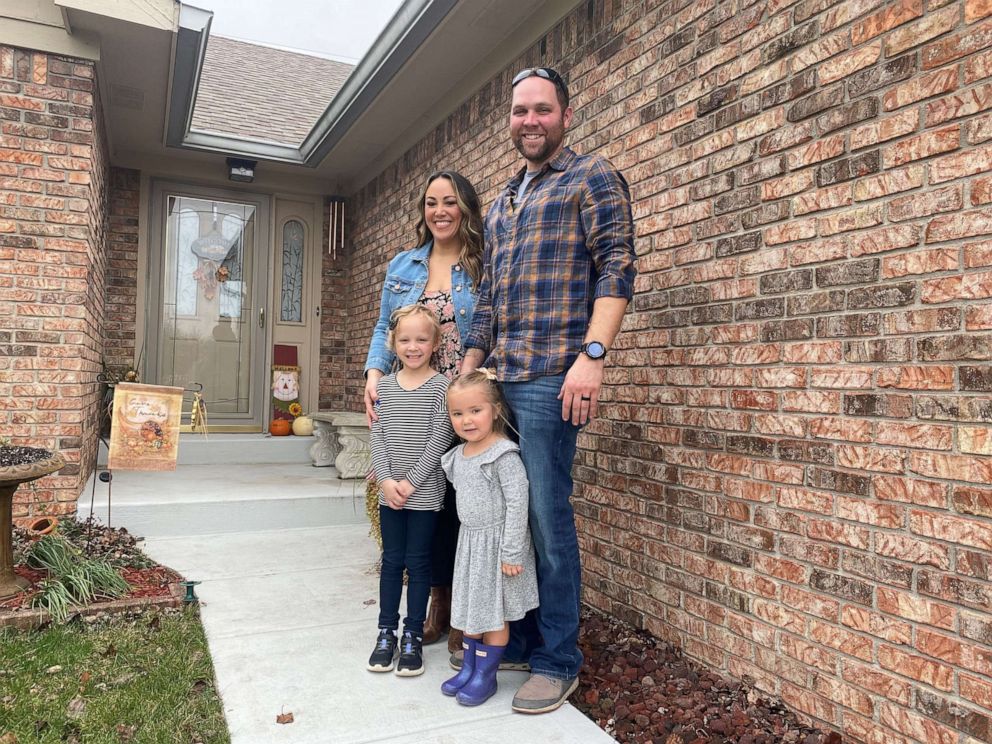 One day after Autumn Carver was hospitalized, she underwent an emergency c-section to deliver the couple's third child, a son named Huxley.

Later that same day, on Aug. 27, she was placed on an extracorporeal membrane oxygenation, or ECMO, machine, which removes carbon dioxide from the blood and sends back blood with oxygen to the body, allowing the heart and lungs time to rest and heal. She has remained on both a ventilator and the ECMO machine since, according to Zach Carver. 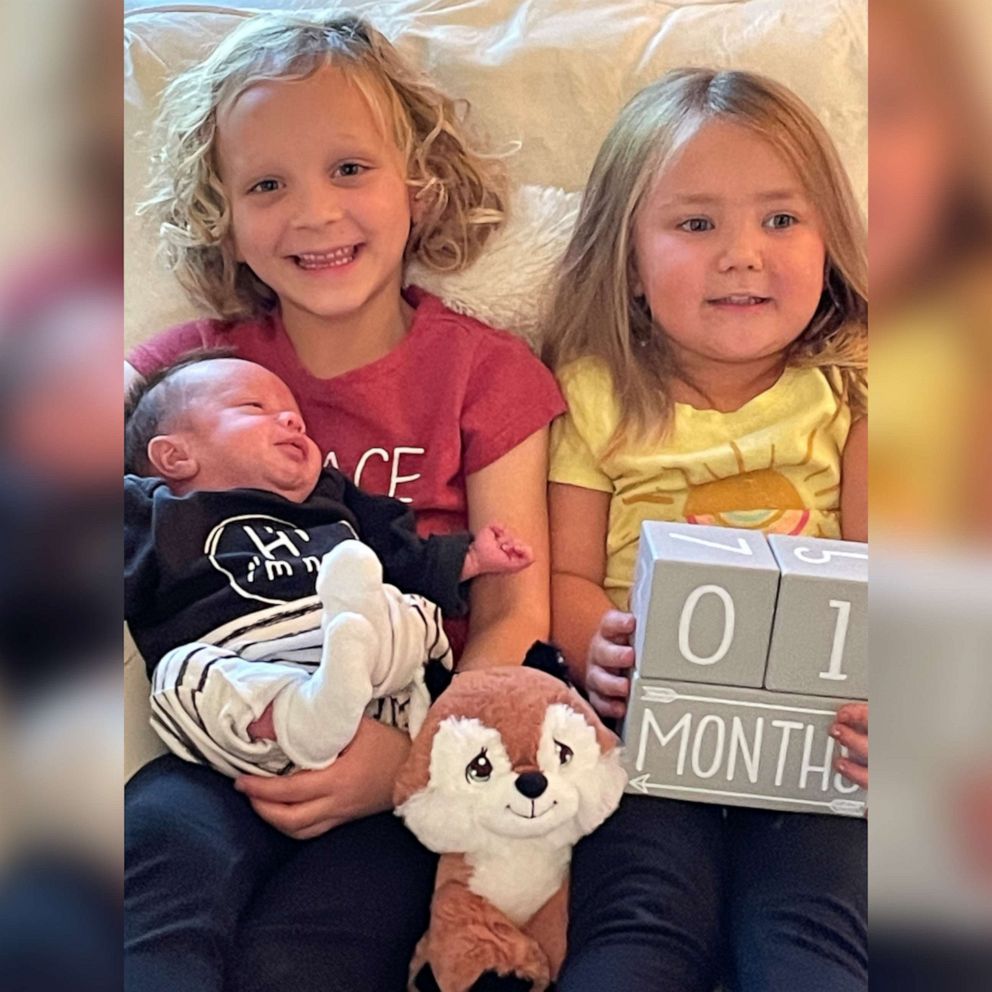 "I’ve heard that she’s going to die countless times, but she’s still here," he said. "We’re praying for time for her to rest on the ECMO machine. This is a new virus and it’s attacked lungs like we’ve never seen before so we just have to give it time."

Autumn Carver had no preexisting conditions and was doing CrossFit workouts right up until she started feeling COVID-19 symptoms, according to her husband. Her last words before she was sedated were that she thought she was going to have a boy, he said.

"Our children are our life and she misses them. She wants to be back with them more than anything in the world, I know that," said Zach Carver, who said his wife is now more alert and responsive, using squeezes of her hand and head nods. "She’s had a lot of hurdles to jump and she’s still fighting hard." 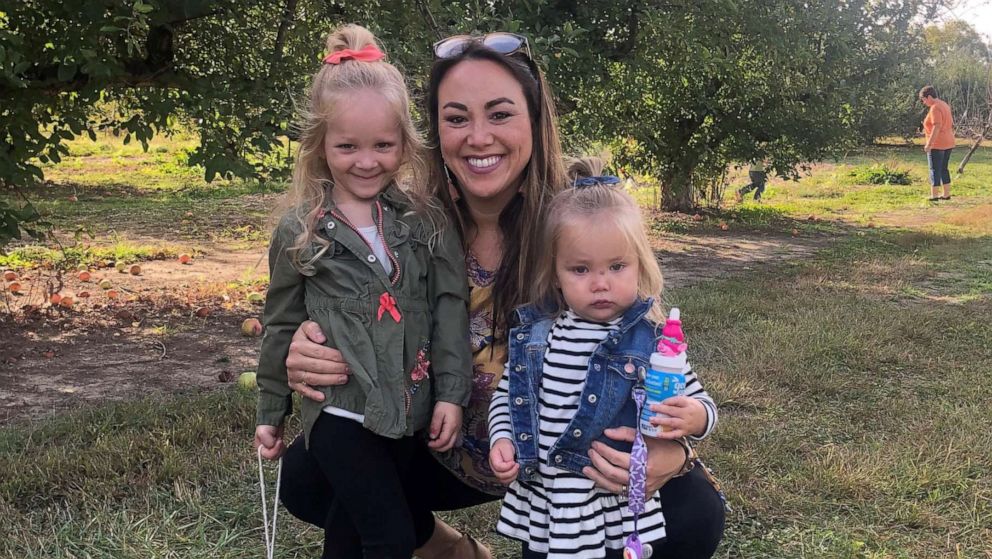 In its new recommendation that all pregnant people get vaccinated, the CDC pointed to data showing there is not an increased risk for miscarriage among people who receive a COVID-19 vaccine.

Both the Pfizer and Moderna vaccines use mRNA technology, which does not enter the nucleus of the cells and doesn’t alter the human DNA. They are the first mRNA vaccines, which are theoretically safe during pregnancy because they do not contain a live virus.

Jamal Chubb, of South Carolina, said his wife, Cierra Chubb, was waiting for more data on the safety of the vaccines for pregnant people before getting vaccinated against COVID-19 herself.

She has spent the past more than 70 days hospitalized and fighting for her life after contracting the virus in her third trimester of pregnancy, he said.

"We didn’t have the information we needed to make a sound choice," said Jamal Chubb, who said he got vaccinated as soon as he was eligible last spring. "The thing we were waiting for was a CDC approval that pregnant women can safely get the vaccine."

Just two days after she was admitted to a hospital in July, Cierra Chubb had to undergo an emergency c-section because her pregnancy was in distress, according to her husband.

She delivered the couple's third child, a son named Myles, on July 26, two weeks before his due date. 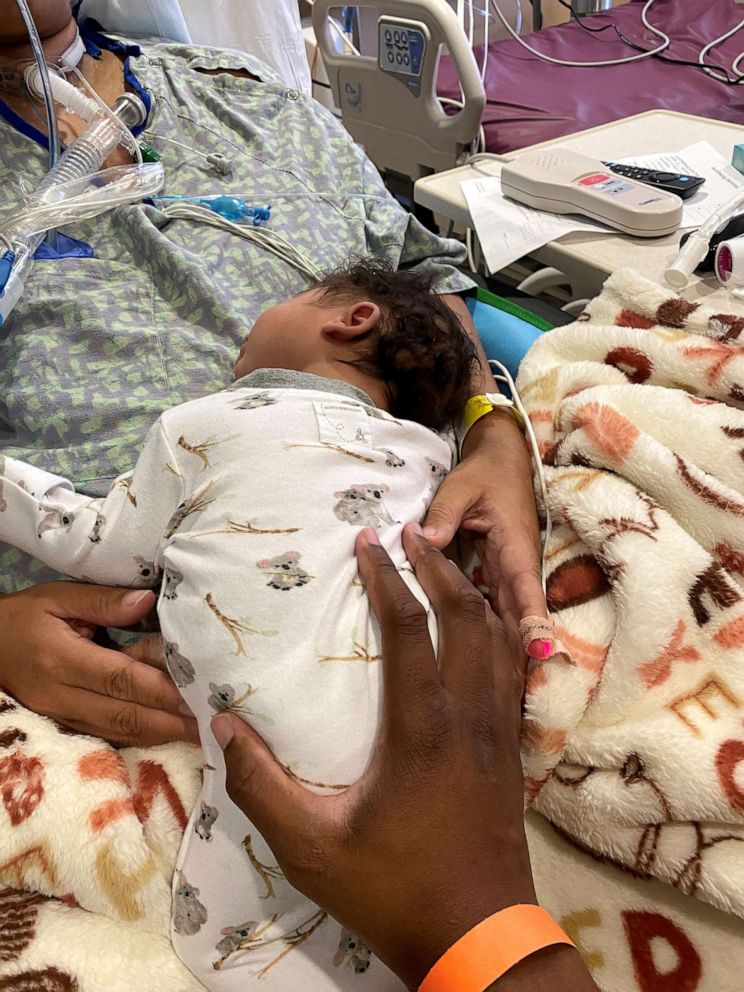 Jamal Chubb
Cierra Chubb has been hospitalized with life-threatening COVID-19 complications since giving birth to her son, Myles, in an emergency c-section.

While Myles was born healthy, Cierra Chubb's condition quickly deteriorated after his birth. She was put on a ventilator and then an ECMO machine, on which she stayed for nearly 30 days, according to Jamal Chubb.

"The [doctors] were only letting me go [into the hospital] to see her on days they thought she was going to die," he said. "They said that even if she woke up, she would not be the same."

MORE: Nurse who lost her baby after contracting COVID-19 urges pregnant women to get vaccinated

After spending close to one month on an ECMO machine, Cierra Chubb's condition began to improve in what doctors say is a miracle, according to Jamal Chubb.

"Doctors went from saying she needed to be put in hospice and that she wouldn’t make it; to today she is walking assisted," he said. "The last month, we've seen her come alive."

Cierra Chubb did not remember giving birth but has now met her son, Myles, and been reunited with her two older children, ages 7 and 2, according to Jamal Chubb, who shares details of his wife's recovery on TikTok in hopes of educating others.

She is still on a ventilator but has regained her cognitive function and is taking some steps with assistance. Though she has improved, she may still require a lung transplant and is facing months and months of rehabilitation, according to Jamal Chubb. 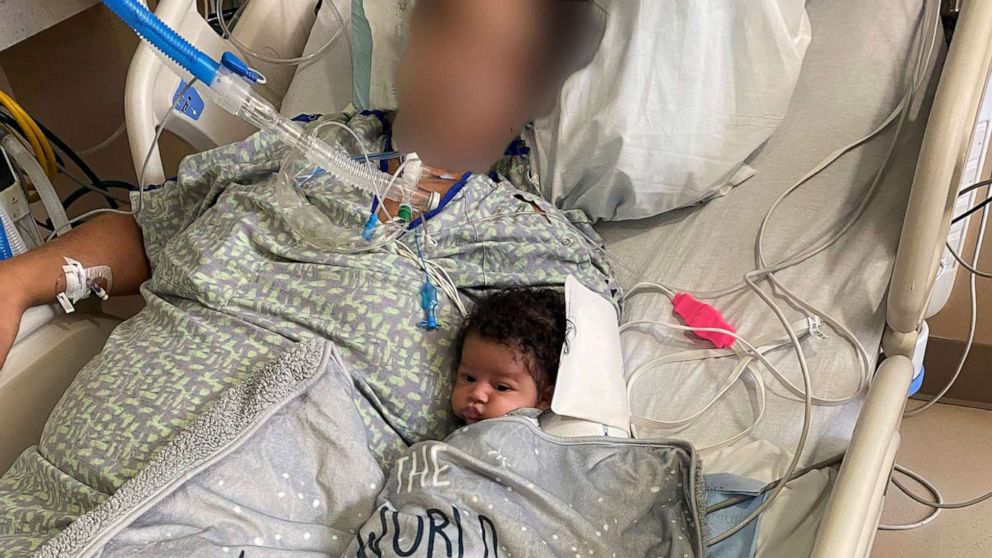 Jamal Chubb
Cierra Chubb has been hospitalized with life-threatening COVID-19 complications since giving birth to her son, Myles, in an emergency c-section.

"There is a good chance she is not going to die, but there are so many looming questions," he said. "I don’t want to watch another person go through what we’ve gone through, so if that means getting a vaccine, then for the love of your family, protect yourself."