A mother who lost her only child to an accidental drug overdose is speaking out in hopes of saving lives as overdose deaths raise national concerns during the novel coronavirus pandemic.

Chandler Cook was clean for over a year before his sudden death on April 21. The 28-year-old had grown fond of his job as head barback at a restaurant in Jacksonville, Florida, and was training to become the head bartender.

When he wasn't working, Chandler spent time camping, biking and attending music festivals. He had a great relationship with his mom, Michele Holbrook.

"He was just an amazing young man," Holbrook of Amelia Island, Florida, told "Good Morning America." "He would give the shirt off his back. In school, if someone was being picked on, he would be on their side. He had a heart of gold."

Holbrook said Chandler emperimented with marijuana and alcohol at the age of 13. At 19, he was prescribed opioid painkillers after a shoulder injury. "When he couldn't get that any longer, he started using heroin," she explained.

"Where a normal human being could go out and have one glass of wine, with an addict, they cannot do any of that," Holbrook added. "It is overboard and I saw that with him." 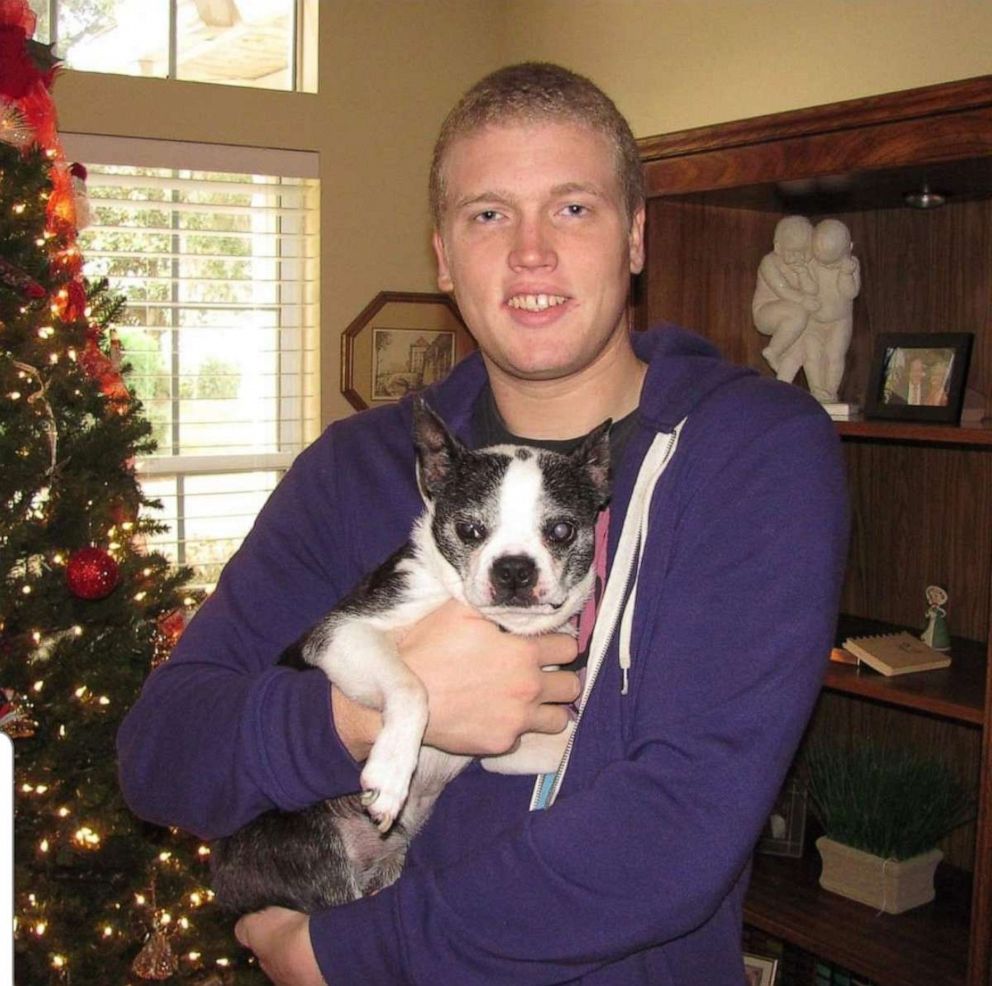 Chandler was revived after a heroin overdose in 2017. He then asked to be checked into a drug rehabilitation center.

"He called and said, 'Mom, I need help. I need rehab,'" Holbrook said. "A counselor helped get him into a rehab in Georgia."

"But of course, it's just that vicious cycle," she added. "After that, he came back [and] started using marijuana and other drugs."

Holbrook said Chandler sold to an undercover officer after returning from rehab and served six months in jail. He was placed in another rehab program in Jacksonville.

"As a mother of an addict, you can get angry because you are so frustrated," Holbrook said. "It's a full-circle process."

In a video soon before his death, Chandler is interviewed by his mother, revealing to her his personal struggles with addiction.

"I want to see the stigma of addiction be dropped," Chandler tells Holbrook in the clip. "I want to see this country get better. I had a tough battle with it, and my battle, it's a lifelong thing." 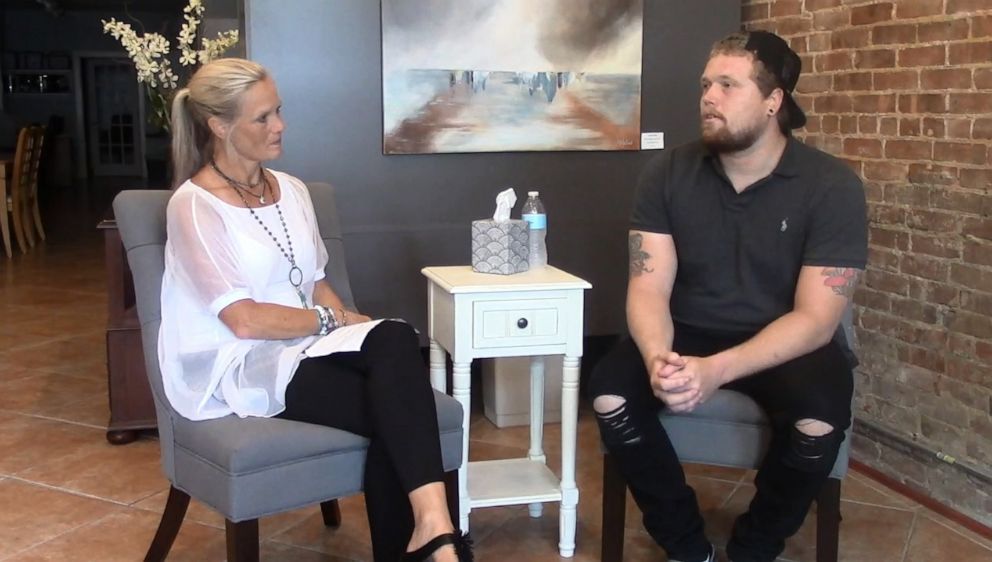 Michele Holbrook
In a recent video before his accidental drug overdose death, Chandler Cook, 28 of Jacksonville, Florida, is interviewed by his mother, Michele Holbrook, revealing to her his personal struggles with addiction.
MORE: How isolation during coronavirus can impact those recovering from addiction

He went on, "Over this past year, I've seen things come back into my life... I have a great relationship with my family again. I have a great job again, I'm healthy, I'm happy."

On April 20, Holbrook texted her son, asking how he was holding up.

"I even said, 'I'll be so glad when I can give you a big hug around the neck,'" she recalled telling him.

Chandler never replied to Holbrook's message. The following day, Chandler's friend called Holbrook to tell her he'd be going to Chandler's apartment to check in on him. 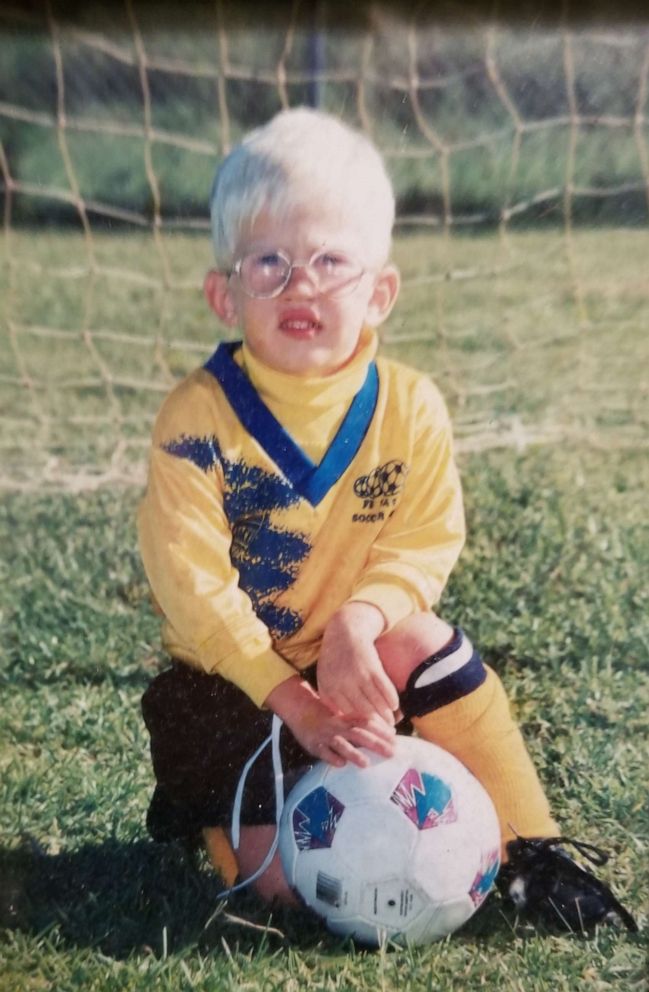 Michele Holbrook
Chandler Cook, 28, is seen in an undated childhood photo. Chandler was clean for over one year before dying of an accidental opioid overdose on April 21 in Jacksonville, Florida.

When Chandler didn't answer knocks, his friends broke the door down.

"I literally almost passed out," Holbrook said. "What do you do when you think your son's dead or you think something's wrong? I remember walking up to his apartment and Jesus said to me, 'It is OK. It is my turn to look after him.' I think that's what will give me peace, is knowing I will see him again." 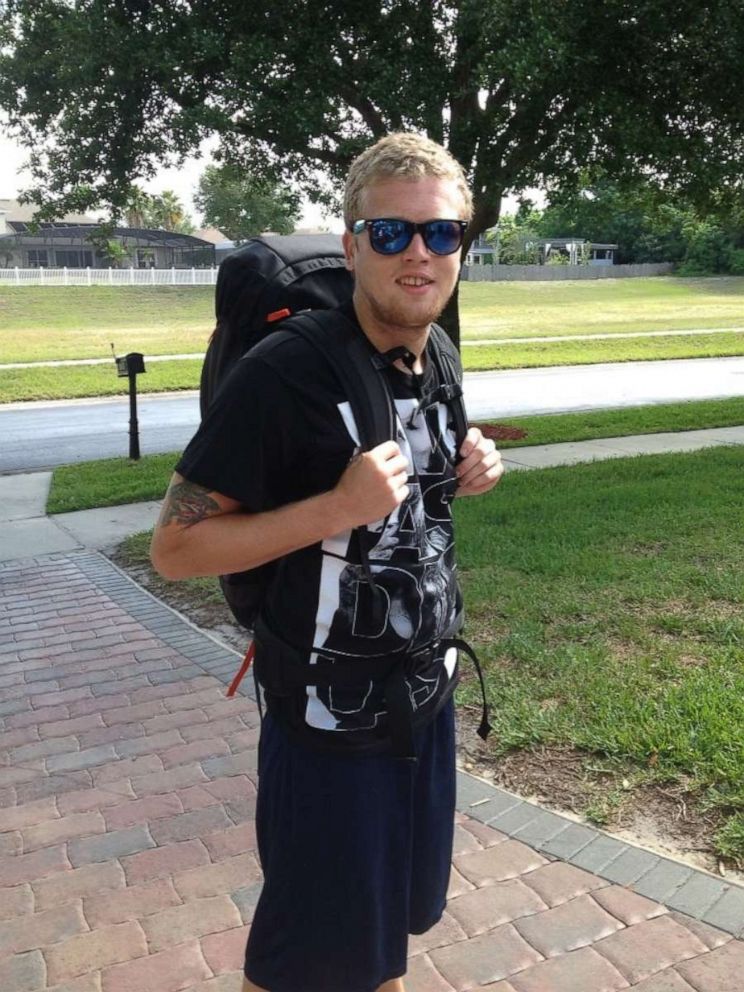 Holbrook looked on as police removed Chandler's body from the scene. His death was ruled an accidental opioid overdose.

Holbrook held a social distancing memorial at her family church. Afterward, 250 cars paraded around the building to honor Chandler.

Chandler is one of many in the nation who have died as a result of a drug overdose over the last few months as the novel coronavirus has killed hundreds of thousands globally.

The COVID-19 pandemic has forced millions of Americans into isolation, as doctors continue to look for a cure.

It's unclear if there's a nationwide trend of drug overdoses happening specifically during the pandemic, though several communities have reported a spike in drug overdose deaths.

In Jacksonville, where Chandler lived, the fire and rescue department reported a 20% increase in overdose emergency calls in March alone. In Columbus, Ohio, the county coroner's office saw a surge in overdose deaths, including 12 in a 24-hour period the first week of April. 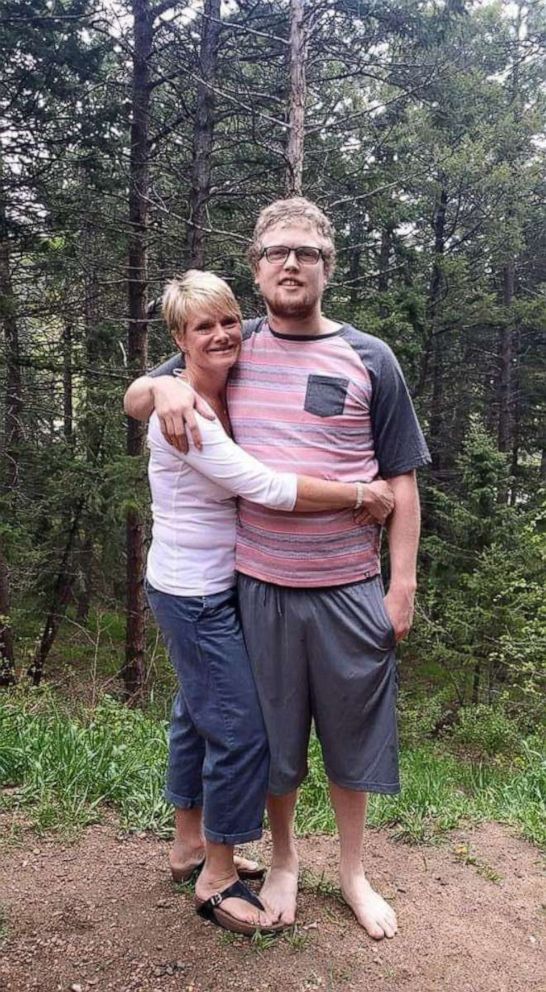 Aliese Alter is the senior program manager for the Overdose Detection Mapping Application Program (ODMAP) Program Office based out of Baltimore, Maryland.

ODMAP is free of charge to first responders and government agencies, and is funded through Washington/Baltimore High Intensity Drug Trafficking Area by the Office of National Drug Control Policy.

ODMAP is a mobile friendly interface which can be accessed by phone, tablet and computer, and which helps those on the front lines of the overdose epidemic track both known and suspected fatal and non-fatal overdose incidents.

Agencies and states are not mandated to use ODMAP, though participation is wide with over 3,300 participating agencies across 49 states, Puerto Rico and D.C. There's been over 265,000 suspected overdoses submitted.

Michele Holbrook
Chandler Cook, 28, is seen in an undated childhood photo. Chandler was clean for over one year before dying of an accidental opioid overdose on April 21 in Jacksonville, Florida.

Since March 24, as stay-at-home orders continue to be enforced, ODMAP has been releasing weekly reports analyzing the possible implications of COVID-19 on the overdose epidemic.

"Although several U.S. communities have reported a spike in overdose deaths, it's still unclear what nationwide trends are, due to several evolving variables," Alter explained.

To understand the full reach of the overdose epidemic, Alter said there's much to consider including seasonality, unemployment rates, the current state of the economy and how it will affect people who use drugs.

Recently, ODMAP released an analysis evaluating the possible consequences of COVID-19 on the overdose epidemic (meaning all drugs, including opioids and stimulants).

What it found was that historic data modeling would not have predicted the increase in overdose activity present in the ODMAP submissions since the onset of COVID-19.

MORE: Challenges mount for those with addiction disorders during COVID-19

The Overdose Detection Mapping Application Program (ODMAP)
The Overdose Detection Mapping Application Program (ODMAP) office based out of Baltimore, Maryland, released an analysis evaluating the possible consequences of COVID-19 on the overdose epidemic, and reported that historic data modeling would not have predicted the current increase observed in ODMAP, which is observed in Figure 3. ODMAP is free of charge to first responders and government agencies after being funded through Washington/Baltimore High Intensity Drug Trafficking Area by the Office of National Drug Control Policy.

Although several U.S. communities have reported a spike in overdose deaths, it's still unclear what nationwide trends are.

May 2020 is showing a continuation of this trend, with an increase of 8% in overdoses in the first six days of the month, when compared to 2019.

As ODMAP notes in its May 13 report regarding overdose data, ODMAP submissions and COVID-19 cases, "correlation does not imply causation."

Though, experts are growing concerned about the effects the pandemic may have on people like Chandler, who Holbrook believes wouldn't have relapsed if it weren't for the current state of the world.

"Once our city and nation and government shut down, he had no where to go," Holbrook said. "Now you're looking at no job, and structure is gone. There's no income and stress. There's isolation and no one to hang out with because we have to follow strict guidelines." 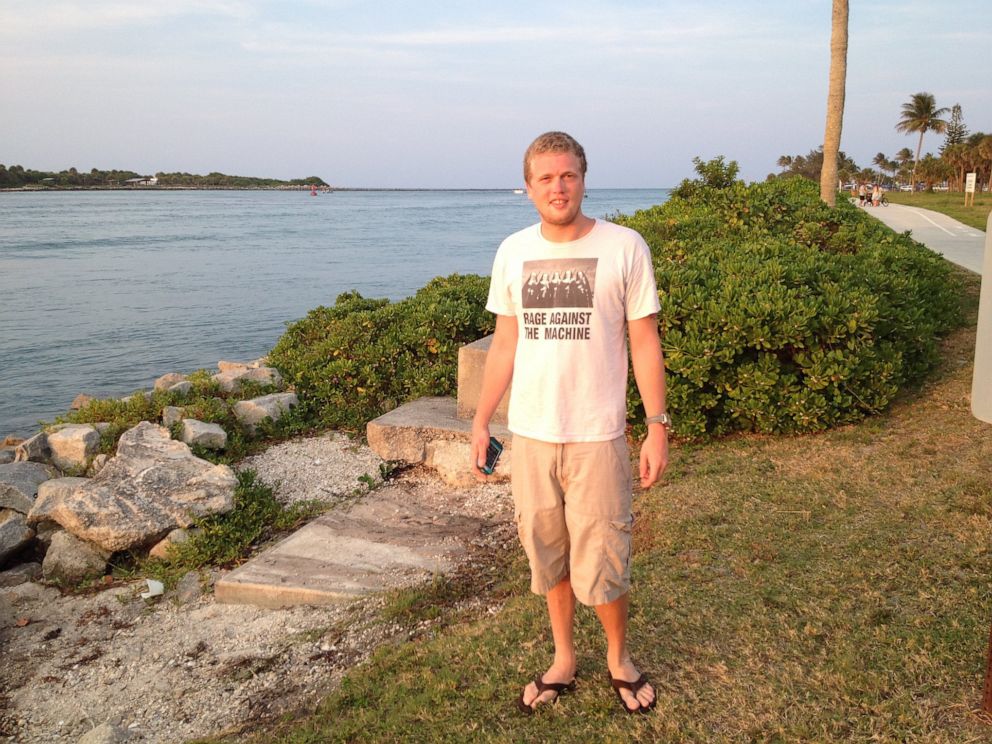 "They lose everything that was helping them stay clean and sober," she added.

In a statement to ABC News in April, regarding increased reports of overdose deaths, U.S. Attorney for the Western District of New York James Kennedy Jr. said, "I think we need to consider the role that social isolation coupled with nonstop reporting on the pandemic may have on the feelings of desperation and hopelessness among those struggling with substance abuse."

"Amidst the current crisis, we need to remember that substance abuse existed long before COVID-19, and it will likely remain long after we have wiped out the virus," Kennedy added.

Recovering from addiction during the COVID-19 pandemic

Dr. Janet Taylor is a psychiatrist at Centerstone of Florida and treats people with addiction.

Taylor said isolation can be more challenging to recovering addicts as they may rely on routine and positive distractions to maintain sobriety.

And with more than 38 million Americans left jobless, daily routines have arguably been compromised.

"Employment is important for positive mental health and self esteem." Taylor told "GMA." "A lot of my clients are really frustrated and feel like they're going stir crazy. Historically, they would turn to using and some have. Many are trying not to, but those cravings and desires, especially to control moods, people struggling with addiction have to deal with it every single day."

Additionally, those in recovery have been stripped from normal resources due to social distancing guidelines.

Taylor admitted help may be harder to find, but it's crucial to get creative in order to stay clean and sober. 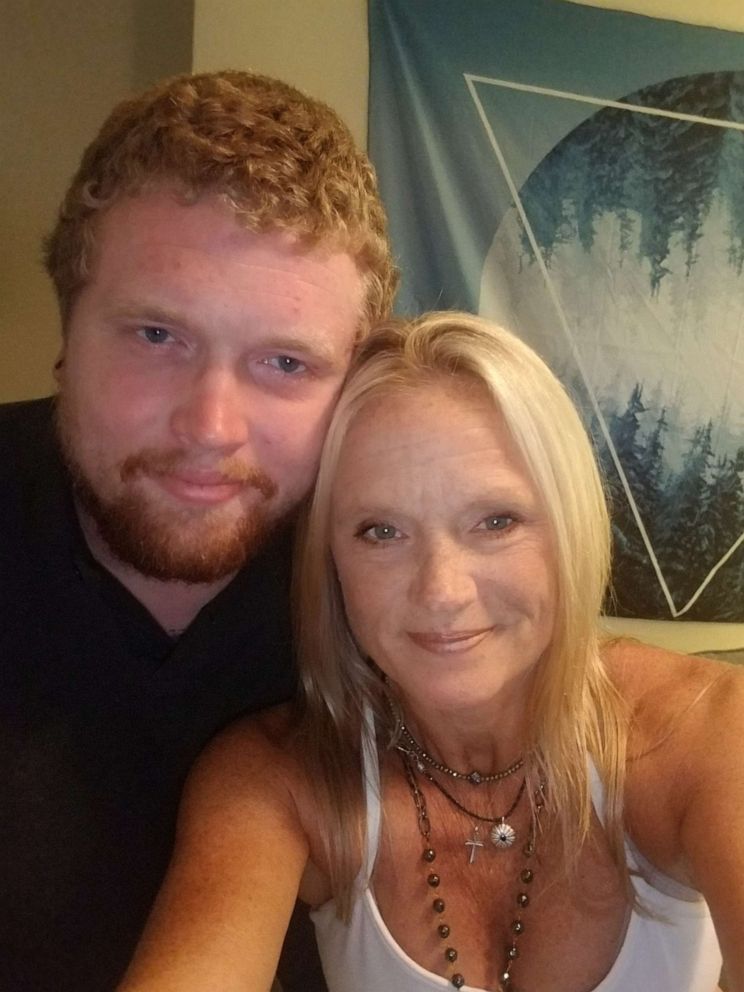 Those cravings and desires, especially to control moods, people struggling with addiction have to deal with it every single day.

Here, Taylor offers advice for people struggling with addiction during the pandemic and their loved ones.

1. Reach out to your sponsor.

3. Keep active, whether it be mental or physical.
"It's a time to self-reflect and think about your sense of purpose," Taylor said. "Think about small goals, like the fact that you didn't use in a day. Work on GED, a resume. Do positive activities to help you so when restrictions are lifted, you're ready."

6. Call 911's non-emergency line and its dispatchers can direct you to appropriate resources.
"Treatment is there 24/7. It may be harder to access, but be resourceful," Taylor said. "Now is not the time to stop what you're doing."

7. For family in friends of people in recovery, it's important to check in.
"Some burn bridges, and you'll have firm boundaries," Taylor said. 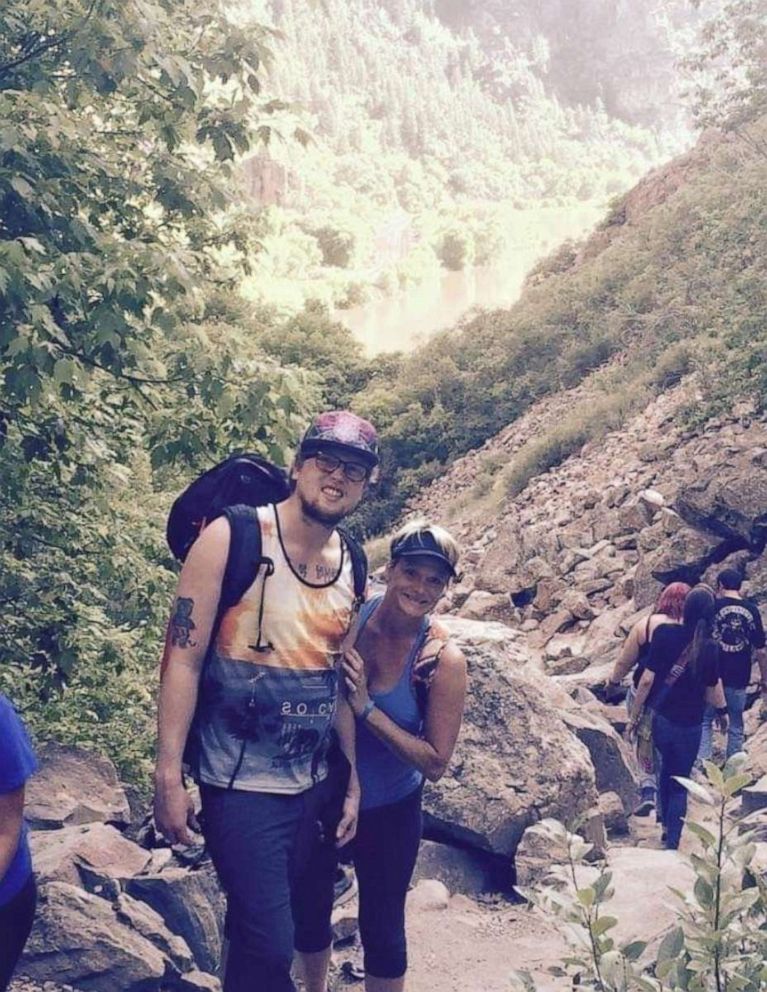 Holbrook agreed, even offering her own telephone number to those who come across Chandler's story. "If your family member is struggling, Zoom them, FaceTime them," she said.

Holbrook, who does advocacy work for the Children's Tumor Foundation, now hopes to start a non-profit educating kids in Chandler's memory.

If you're struggling with addiction, the Substance Abuse and Mental Health Services Administration can help you locate a treatment facility. Their helpline is free, confidential and open 24 hours a day: 1-800-662-HELP (4357).