For the past month, Katelyn Evans, a high school junior, has juggled her school work and extracurricular activities with a very unique role: being part of the small group helping to make sure a COVID-19 vaccine is safe for kids.

Katelyn, who lives with her mom and brother in a suburb of Cincinnati, is one of around 100 children taking part in the trial for Pfizer's Covid-19 vaccine at Cincinnati Children's Hospital.

Pfizer made headlines earlier this week when it announced early analysis showed its coronavirus vaccine to be 90% effective at preventing symptomatic cases of COVID-19.

"It's just really cool knowing that I got to be part of something," Katelyn told "Good Morning America." 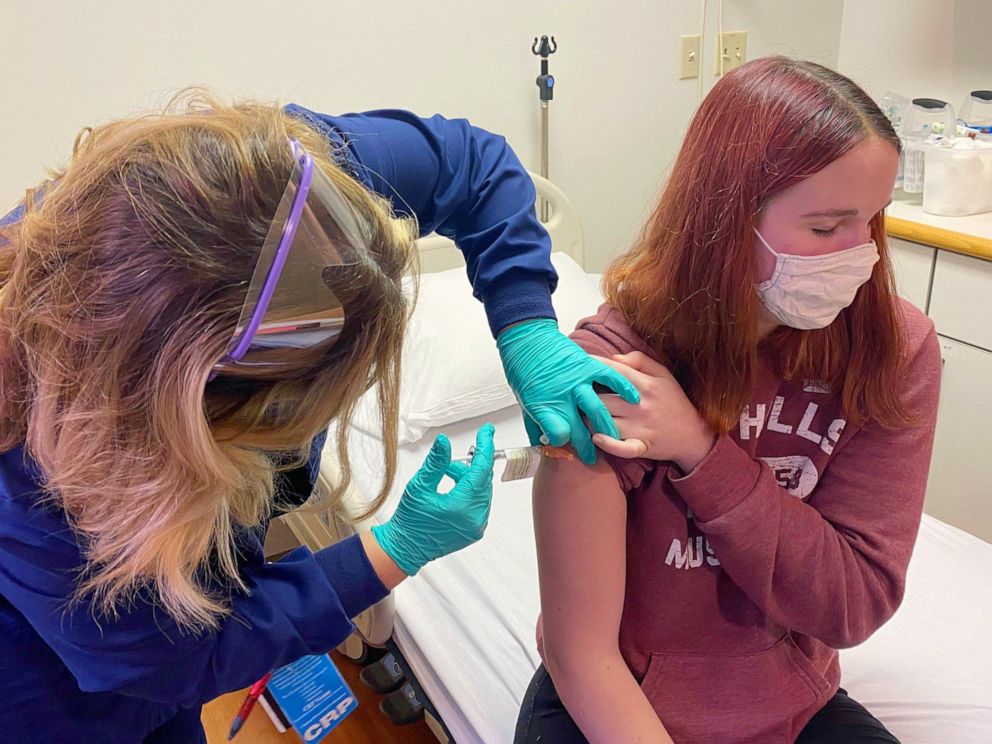 Katelyn found out about the vaccine trial through her brother, who saw it on the news. The whole family signed up to be part of the trial, but only Katelyn was selected.

Following trial protocols, the teen does not know whether she received a placebo or the actual vaccine.

"I trust the doctors and the nurses and scientists," said Katelyn's mom, Laurie Evans, when asked if she had concerns about enrolling her daughter in the trial. "And I hope other people will sign up to do it." 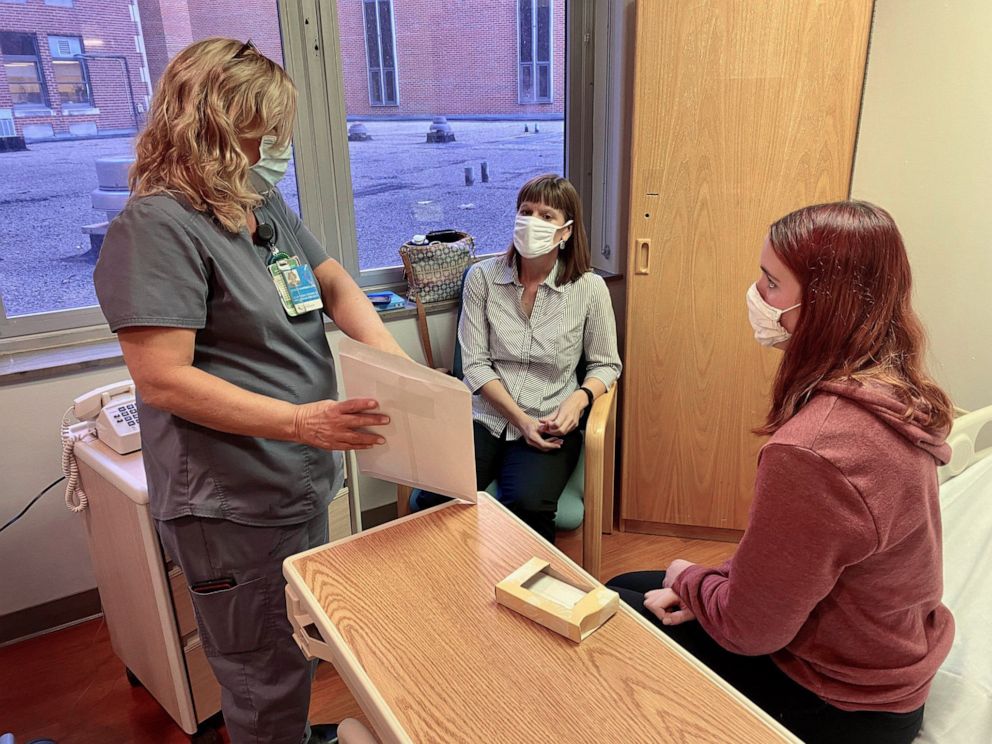 Another child in the trial, Abhinav, whose parents asked that his last name not be used, raised his hand to be part of the vaccine research after his father, a bone marrow transplant physician, took part in the adult trial. His father, Sharat, said he experienced few side effects and felt safe enrolling his son in the trial, to both hopefully protect him from COVID-19 and to help others.

"I’m happy that he’s part of a clinical study that would not only help him but eventually the community at large," said Sharat, who participated in Phase 1 of the trial earlier this year. "Although there could be some anxiety, what I can say is that most of the data suggests that the vaccine is well tolerated and the side effects are minimal, so the benefits outweigh any risks."

Children participants like Abhinav and Katelyn undergo two shots over the course of around six hospital visits, which they said they're able to do after school. Abhinav and Katelyn, who both returned to in-person schooling this fall, said they hope a vaccine helps things get back to normal.

"I think that the trial could actually help in not only protecting me but also other kids and other people," said Abhinav. "I would also encourage other kids to take it." 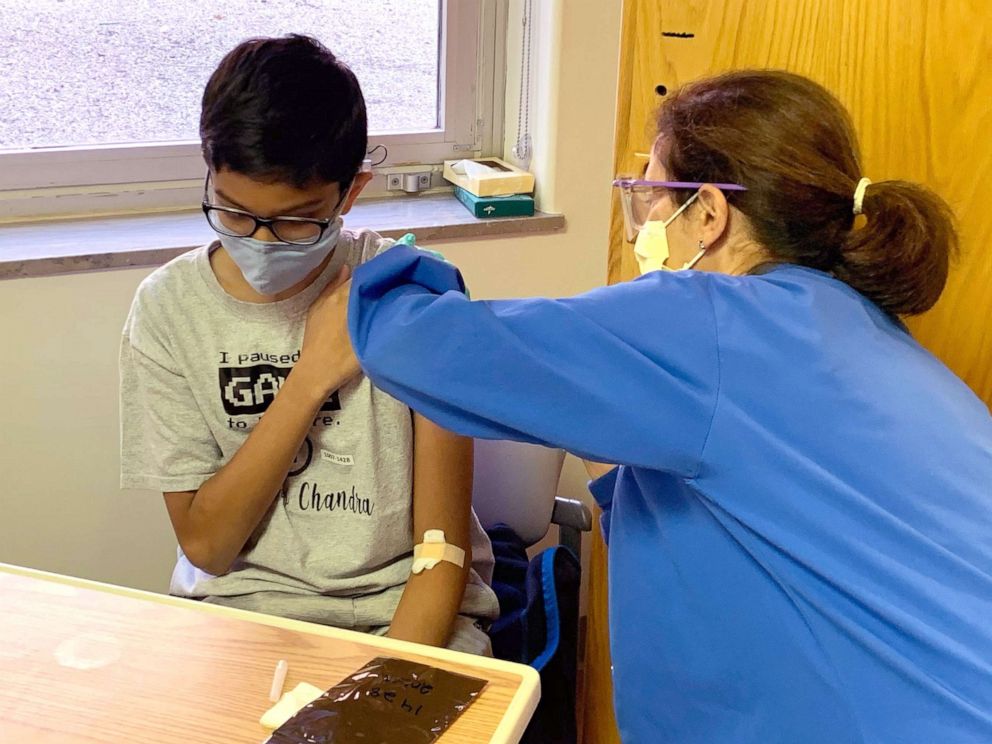 Sharat said he and his family saw it as "really exciting news" when Pfizer announced the data showing its vaccine to be 90% effective at preventing COVID-19.

The company, along with co-developer BioNTech, published safety data reviewed by an independent data-monitoring board over the weekend that found 94 COVID-19 infections in a study that enrolled nearly 44,000 people, which Albert Bourla, chairman and chief executive officer of Pfizer, called “among the very good that we’ve seen in any vaccine so far.” Some participants got the vaccine while others received a placebo shot.

Dr. Anthony Fauci, the nation’s top-infectious disease expert, has said the results suggesting 90% effectiveness are “just extraordinary," adding, "Not very many people expected it would be as high as that.”

MORE: Pfizer CEO on coronavirus vaccine: 'We feel very good about the safe

Pfizer tested the vaccine on adults first and then gradually opened its trials to children, following safety protocols, according to Dr. Robert Frenck, who is leading the trial for Pfizer's COVID-19 vaccine at Cincinnati Children's Hospital.

"In clinical trials, typically what we’re going to do is start in adults and to get information about the vaccine in adults, and then once we have a good handle as far as the safety profile in adults, if it would be a disease it would affect children, then we would be looking to move into testing in children," he said. "We have a very good understanding of the safety from this vaccine in adults … which then allowed us to move down into adolescents." 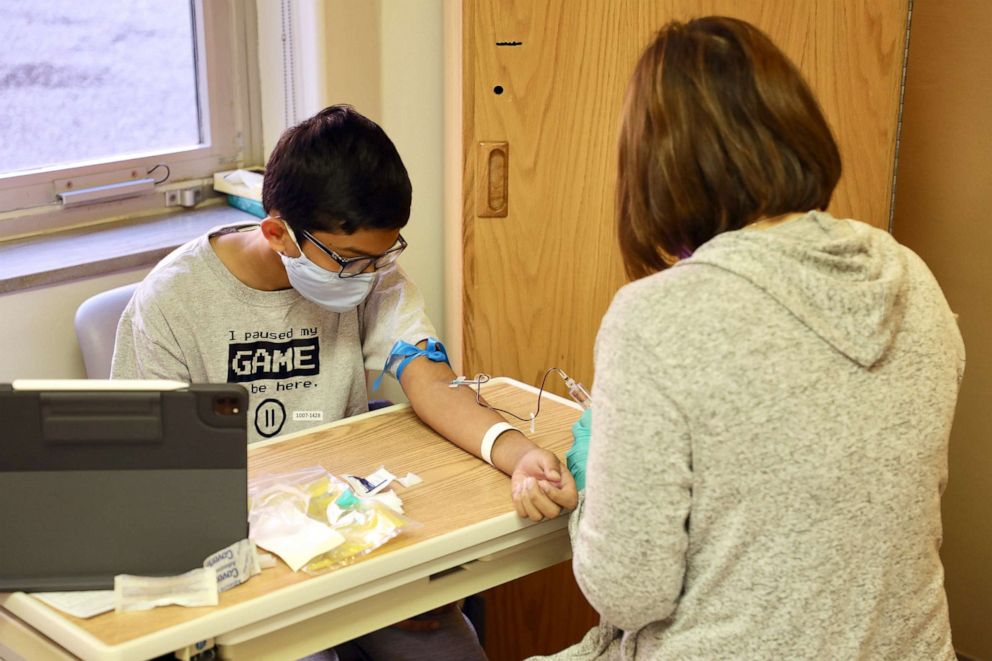 While children have not faced as many deaths from COVID-19 as adults, particularly people in the high-risk category of being over age 65 and/or having preexisting conditions, they can still get the virus and even more importantly, they can transmit the virus to adults, according to Frenck.

"That's one of the things I’m concerned about, is that a child or adolescent may not realize that they have COVID, they may not be getting that sick, but they have something and they’re transmitting it to their parents or their grandparents," he said. "So that’s why it’s so important to be studying this vaccine and immunizing children and vaccines, too."

The United States remains the worst-affected nation during the coronavirus pandemic, with more than 10.6 million diagnosed cases of COVID-19 and at least 242,918 deaths.

Pfizer's vaccine does not use any active virus, which means the vaccine cannot give a person COVID-19, explained Frenck.

The way the vaccine is being made also means it could be available very quickly once it is approved, according to Frenck, who noted, "Within months I think we’ll have lots and lots of doses in the United States available for people who want vaccines."

MORE: US will allow pharmacists to administer vaccines to kids as vaccine rates drop during coronavirus pandemic

Nearly 200 vaccine candidates for COVID-19 are being tracked by the World Health Organization, at least 10 of which are in crucial phase three studies. Of those 10 potential vaccines in late-stage trials, there are currently five that will be available in the United States if authorized or approved.

Frenck said he wants to assure people, especially parents, that the apparent speed of the vaccine hitting the market does not mean that researchers are "cutting any corners."

"People should feel comfortable that this vaccine and all vaccines for COVID are being tested with great rigor," he said. "We’re doing everything the way that we normally do. If anything we may be compressing the time a little bit by having people work seven days a week and shifts around the clock to be able to collect data, to be able to analyze data, but we’re not cutting any corners."

Health experts have warned of a decrease in routine childhood immunizations during the coronavirus pandemic because families were following stay-at-home orders or fearful of going into doctors' offices for vaccinations.

One of the biggest roles Frenck and other health care professionals will play once the vaccine is released to the public is an education campaign making sure people are aware of the vaccine and confident of its safety.

6:07
Chairman and CEO Dr. Albert Bourla talks about the development process, refusal to participate in Operation Warp Speed and more.

"I can tell you as soon there’s a vaccine available I’m going to be rolling up my sleeve and I know my children have already told me, ‘Dad, when can I get my vaccine?'" said Frenck, a father of two. "The study for these COVID vaccines are being done at very high levels of safety and I think people should feel comfortable."

Frenck said he believes hand washing -- a critical preventive measure for COVID-19 as well -- and vaccines are the two most important things that have been done in medicine.

"If you look at the number of lives that vaccines have saved, it outpaces every other preventative medicine thing we do," he said. "The other thing that people don’t understand or don’t remember, and it’s a good thing they don’t remember, is that 100 years ago, one out of every five children died before they were 5 years old, and the reason they don’t have that kind of death rate anymore, most of that is attributed to vaccines."