Women who exercise while pregnant are not only helping themselves, but their babies too, according to a new study.

Newborns whose moms exercised during pregnancy may have improved heart health and reached movement milestones earlier than other babies, according to researchers at East Carolina University.

The researchers compared the outcomes of 1-month-old babies from a group of 71 pregnant women who were randomly assigned to exercise or not exercise during their pregnancy. The women who exercised performed 50 minutes of moderate-intensity, supervised aerobic exercise, three times per week.

The researchers found that exercising during pregnancy resulted in babies who are more adept at movement, and possibly more likely to be active as they grow older. throughout their lives.

“Because physical activity is a modifiable risk factor of childhood obesity, these findings suggest that exercise during pregnancy may potentially reduce childhood risk of obesity,” the researchers wrote in their study, published in August issue of the journal Medicine & Science in Sports & Exercise. 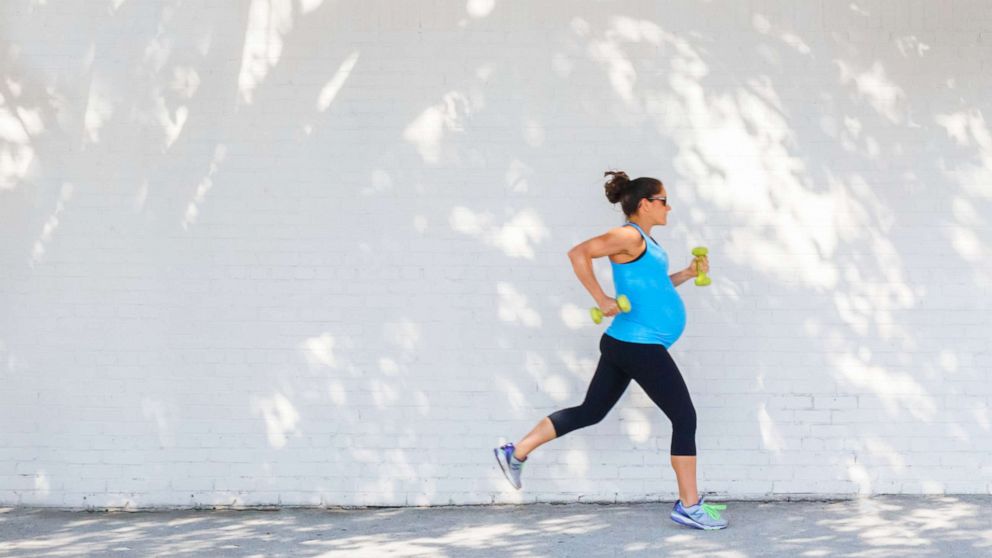 Getty Images
In this file photo, a pregnant woman is shown jogging.

Exercising before birth can also help with labor, research has shown. A study published last year found that women who exercise just three times per week during pregnancy have a shorter labor.

Here are five questions answered about exercising during pregnancy.

1. How often do pregnant women need to exercise?

The American College of Obstetrics and Gynecology (ACOG) recommends that pregnant women get at least 150 minutes of moderate-intensity aerobic activity every week.

2. What types of workouts are good for pregnant women?

Women who were already runners may be able to keep running and jogging during their pregnancy, but should check with their healthcare provider first.

3. Are there any specific workouts to avoid?

Stay away from any sports or specific exercises that could harm yourself and the fetus if you fall, according to Ashton, who cites activities like skydiving, scuba diving and skiing.

ACOG recommends staying away from contact sports and sports that put you at risk of getting hit in the abdomen, like soccer and basketball, and "hot yoga” or “hot Pilates,” which may cause you to become overheated

4. Are there are any reasons to not exercise during pregnancy?

Every woman should consult with their midwife or obstetrician on the types and amount of exercise they should do while pregnant.

Women who are at high risk for pre-term labor or who have severe anemia, pregnancy-induced high blood pressure, placenta previa after 26 weeks of pregnancy, cervical insufficiency and certain types of heart and lung diseases should not exercise while pregnant, according to ACOG.

5. Are there precautions pregnant women should take during workouts?

Pregnant women should avoid standing still or lying flat on your backs as much as possible during exercise, according to ACOG.

ACOG also recommends drinking lots of water before, during and after a workout to stay hydrated, and wearing loose-fitting clothing and not exercising in heat to avoid becoming overheated.