Sleeping too much or too little each night can harm adults' brain performance, increase symptoms of depression and weight and raise the risk of Alzheimer's disease, according to a new study.

The study, published in the journal JAMA Neurology, found that sleeping six hours or less per night or nine hours or more per night negatively impacted adults' health.

"There appears to be a real sweet spot," said Dr. Jennifer Ashton, ABC News chief medical correspondent and a board-certified OBGYN. "People who got less than six hours of sleep on PET scan brain imaging had a higher rate of these brain plaques that we’ve found in association with Alzheimer’s disease."

"However, too much, just as bad. Nine or more hours associated with poor cognitive performance," added Ashton, who was not involved in the study.

The ideal amount of sleep per night is seven to eight hours, the study found.

MORE: This doctor helps Olympians with their sleep. Here are his tips to sleep like a champion.

"This really speaks to the fact that more is not better," said Ashton. "Your brain needs a certain amount of sleep, but too much actually kind of puts your brain to sleep in some ways."

The findings of the study -- which looked at data from more than 4,000 adults in United States, Canada, Australia and Japan -- reemphasize the important role sleep plays in achieving optimal health, according to Ashton.

ABC News
A new study looked at the link between sleep and Alzheimer's disease.

She noted that not getting enough sleep each night affects your immune system and has been associated with everything from increased risk of heart attacks and stroke to depression and obesity.

"I always say sleep has a [public relations] problem. We look at it like a luxury. In fact, it is a medical necessity," she said. "We need to prioritize this on par with our nutrition and our fitness for optimum health."

Ashton added, "I always tell people, ‘If you are not feeling right, look at your sleep first.’"

Here are Ashton's four tips for achieving a good night's sleep, in her own words: 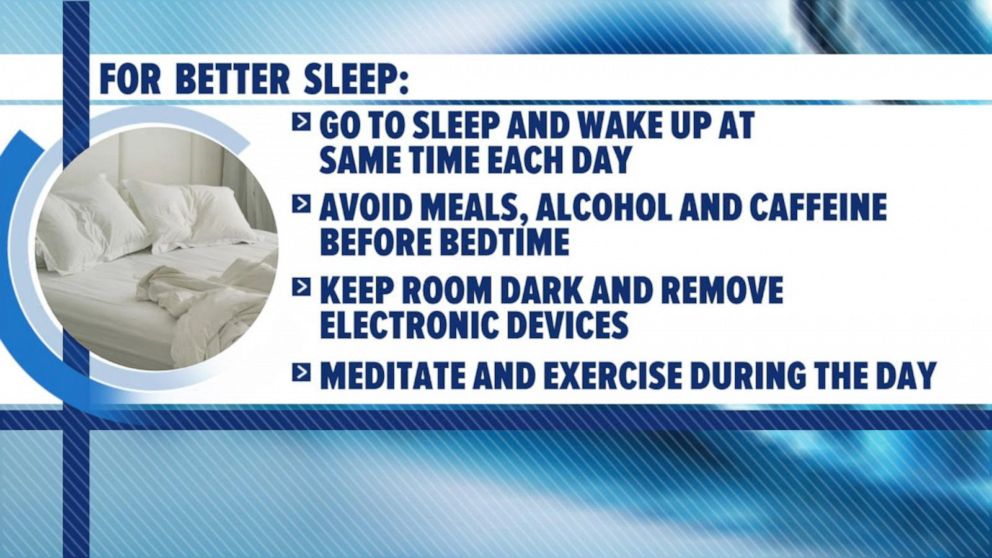 1. Follow a consistent sleep schedule: That means, if possible, every day go to sleep and wake up around the same time. You can’t make up for this on the weekend.

2. Avoid heavy meals, alcohol and caffeine in the couple of hours before bedtime.

3. The environment is really important. You want to keep your bedroom cold, dark and quiet, without something with a screen.

4. Meditation and exercise during the day have been shown to increase sleep at night.