When Daniel Macias was suddenly hospitalized with COVID-19 in early April, doctors were running out of options for treatments as his condition quickly worsened.

“The doctors told us my dad had a 20 percent chance of living,” Macias’ daughter, Giselle Aguirre, told “Good Morning America.” “Knowing that this is where he was at, where his life could be coming to an end, we knew that he would fight with everything in him, because how much he loved us.”

The family from Walnut, California, soon learned about an experimental treatment for COVID-19, taking plasma from someone who has recovered, rich with antibodies to fight the virus, and giving to a person who’s struggling to fight it. Recently, the Mayo Clinic released a study that found transfusions of convalescent plasma into sick patients is safe.

As news of the treatment option, first used to combat the Spanish flu in 1918, came to light, ABC News correspondent, Kaylee Hartung, who was diagnosed with the virus in March, wondered if she’d be eligible.

Hartung described in a first-person account written last month how she was frustrated by the process of figuring out how to donate.

“I filled out the American Red Cross online donor request form, a very simple questionnaire asking if you were diagnosed with a COVID-19 lab test,” she wrote. “And then I waited. Quarantined at home, I had nothing but time.”

Three weeks after volunteering and more than 28 days symptom-free, she was finally able to donate.

MORE: Obama tells graduating HBCU students to step up because leaders 'not even pretending to be in charge'

“In less than an hour, 650 milliliters of my 'golden' plasma filled a bag. It was a rather painless process,” she wrote. “The brief physical discomfort I felt was a small price to pay for the potential payoff.”

The Red Cross informed Hartung her plasma was sent to help three critically ill patients. They tracked one unit to Pomona Valley Hospital where they learned the results for Macias were almost immediate.

“It was just right away the next day, he started doing better,” Macias’ nurse, Lisa Diaz told “GMA.”

Just three days after receiving the plasma transfusion, Macias was taken off the ventilator, according to Diaz. He was finally able to breathe on his own.

After 33 days in the hospital, Macias was released. Back home, his family organized a surprise of a lifetime – a car parade of friends and family to welcome him, including Hartung. 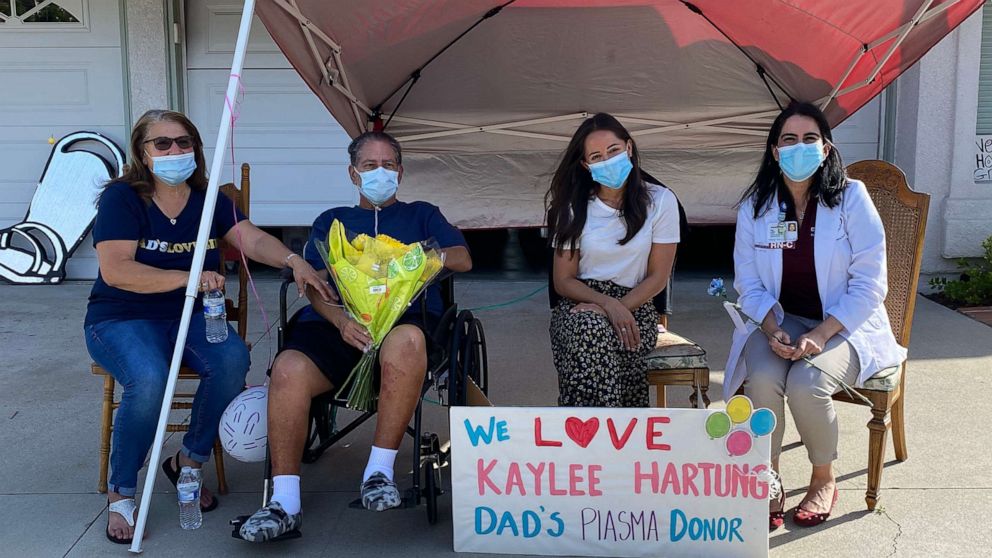 Jenna Harrison/ABC News
Kaylee Hartung poses for a photo with her plasma recipient, Daniel Macias, a COVID-19 survivor, his wife, Maritza, and his nurse, Lisa Diaz.

“Kaylee, you gave me something that only the Lord can do with you,” Macias told Hartung. “Thank you, I love you, I’m here for you.”

“The greatest honor of my life is to be able to do this for you,” Hartung replied.