They even became a topic of debate leading up to the vice presidential debate in early October, when Vice President Mike Pence's team objected to then-Sen. Kamala Harris's request for a divider to separate the candidates. The vice president's office eventually agreed, but not before questioning the necessity and efficacy of the barriers to combat transmission of the novel coronavirus.

MORE: Tents, igloos and barriers, here's how the virus can spread from table-to-table

"Plexiglass dividers do compartmentalize air, and reduces risk to some degree," according to Professor Howard Stone, chair of the department of mechanical and aerospace engineering at Princeton University.

New videos of demonstrations conducted by Stone and his research team and shared exclusively with ABC News show how ​particles, such as those that contain virus, can travel up to and around plexiglass barriers. 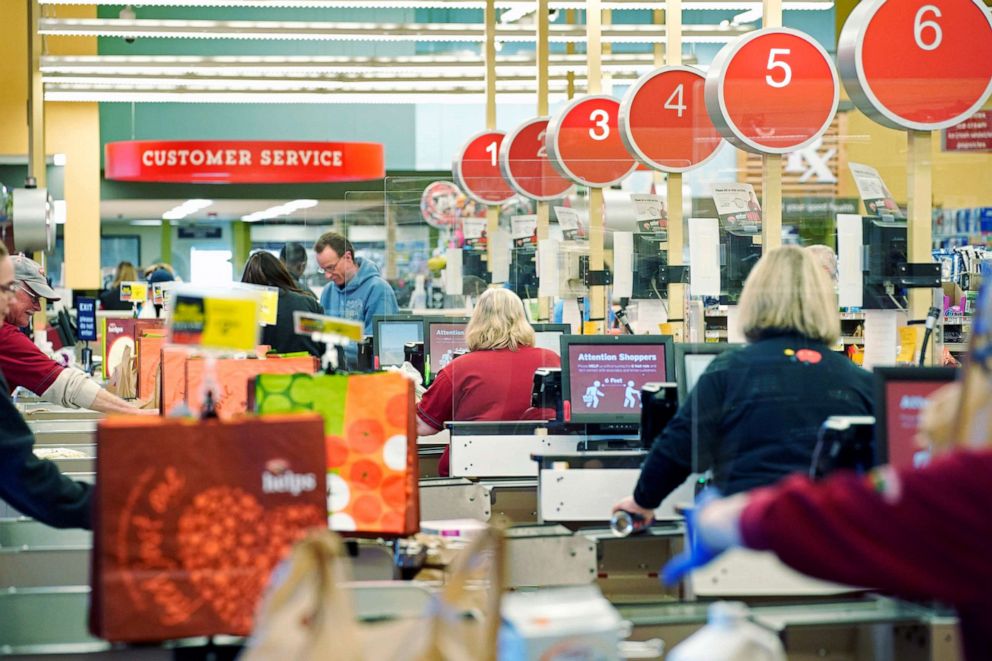 Portland Press Herald via Getty
SCARBOROUGH, ME - MARCH 27: Cashiers ring out customers at the Hannaford supermarket in Scarborough on Friday, March 27, 2020. Hannaford stores have installed plexiglass barriers at the cash registers as a safety precaution for cashiers and customers during the coronavirus outbreak. (Staff Photo by Gregory Rec/Portland Press Herald via Getty Images)

Researchers used a fog machine and a tube to mimic the conditions that exist when someone speaks or breathes.

"The fog shows what happens to small particles that you naturally produce when you breathe, speak, sing. And if you're infected, some of those small droplets will contain virus," said Stone.

In one video, the green fog is propelled in a constant jet stream toward the plexiglass barrier, which Stone said could be a visualization of where particles travel when a person speaks continuously. 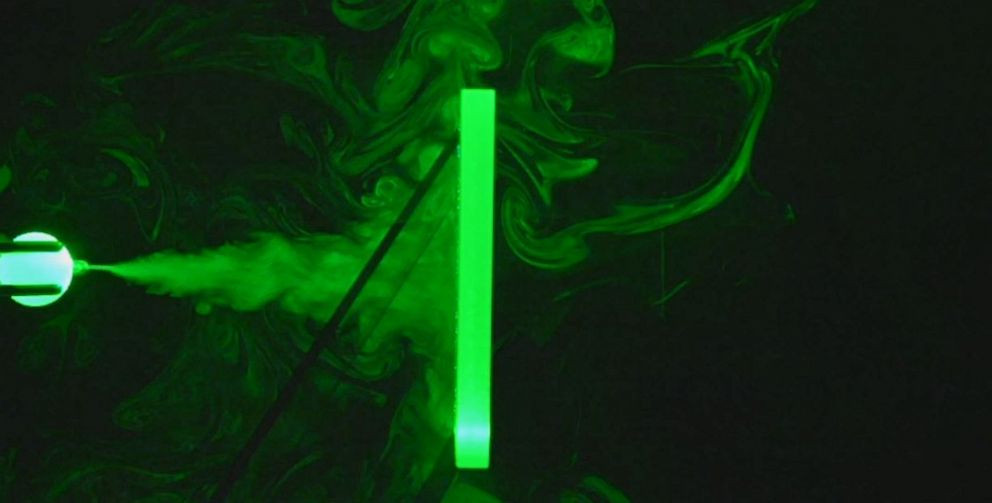 The green fog cannot move through the barrier, so it comes to the edge and picks up other currents, and eventually some fog works its way around to the other side of the barrier, according to Stone.

In another demonstration, green fog is dispersed in periodic pulses, visualizing a person inhaling and exhaling directly in front of a plexiglass divider. Some particles in that video traveled above, below and around the plexiglass divider. 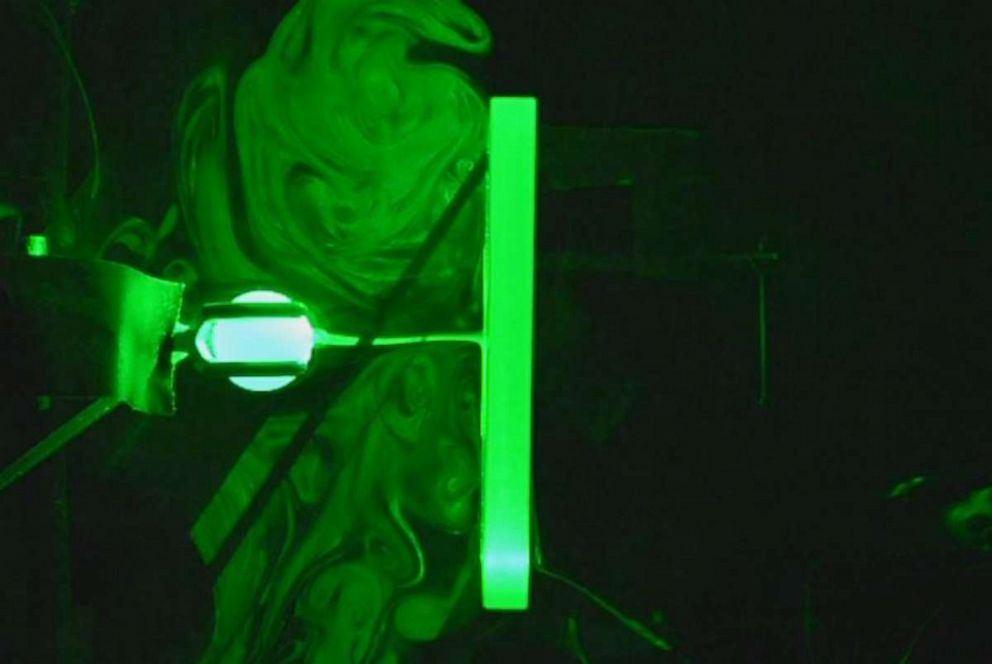 Recent studies have suggested that a range of 300 to 1,000 particles are needed to infect a person with the coronavirus, but more study is needed for us to be confident about the threshold for infection, according to Dr. Jay Bhatt, internist and ABC News medical contributor. "That's why we need to be really careful because even a small amount of virus may potentially infect someone."

Computer simulations created by A. Foster and M. Kinzel, a Ph.D. student and assistant professor, respectively, from the University of Central Florida show the potential movement of particles from an infected person breathing and speaking in an indoor space with plexiglass dividers.

A person's exhaled air is warmer than a standard indoor room temperature, and just like a hot air balloon, warm air rises, said Michael Kinzel, professor of mechanical and aerospace engineering at the University of Central Florida. As seen in the two-minute time-lapse simulation, the viral particles rise with the infected person's breath, and interact with the ventilation system. The ventilation system can potentially drive the particles around the barriers and into neighboring seating areas, according to Kinzel.

One of the requirements of a standard ventilation system is to replace the air inside a room with fresh air from outdoors. The amount of times the inside air is fully exchanged with outside air is referred to as the air exchange rate. 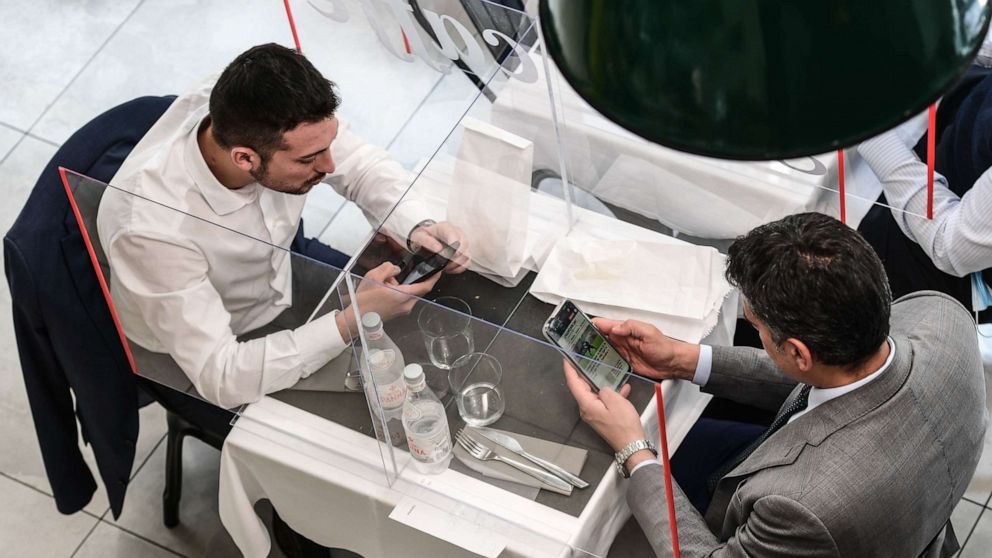 Miguel Medina/AFP via Getty Images
People have lunch at a table partitioned with plexiglas at the Goga Cafe on May 18, 2020 in central Milan during the country's lockdown aimed at curbing the spread of the COVID-19 infection, caused by the novel coronavirus. - Restaurants and churches reopen in Italy on May 18, 2020 as part of a fresh wave of lockdown easing in Europe and the country's latest step in a cautious, gradual return to normality, allowing businesses and churches to reopen after a two-month lockdown. (Photo by Miguel MEDINA / AFP) (Photo by MIGUEL MEDINA/AFP via Getty Images)

Medical experts agree that while plexiglass dividers have benefits, there are limitations and they need further study.

"Plexiglass dividers aren't a zero-risk approach. They need to be used in addition to masking, distancing and hygiene," said Bhatt.