By Lizann Robinson
Share —
Sign up for our newsletters to get GMA delivered to your inbox every morning!

A woman who is an aspiring physician was surprised with $10,000 for medical school Saturday after being credited with helping to save the life of a National Hockey League (NHL) coach.

The Vancouver Canucks and Seattle Kraken surprised the woman, Nadia Popovici, 22, at their game Saturday night in Seattle.

Popovici was attending a game between the two teams in October when she spotted what she believed could be a cancerous mole on the neck of Brian "Red" Hamilton, an assistant equipment manager for the Canucks.

After the game, Popovici tried to get Hamilton's attention by writing a note on her phone and holding it up to plexiglass for him to see.

Together with the @SeattleKraken, we awarded Nadia Popovici a $10,000 scholarship for medical school as a show of our appreciation 👏 pic.twitter.com/VgK8aMgJTA

"I put mole, doctor and cancer in red and made them bold," Popovici told ABC News' Will Reeve in an interview that aired Monday on "Good Morning America." "I just held it up to the plexiglass and knocked."

Hamilton, a nearly two-decade veteran with the Canucks, according to ESPN, said he paid attention to Popovici's message because of her persistence. 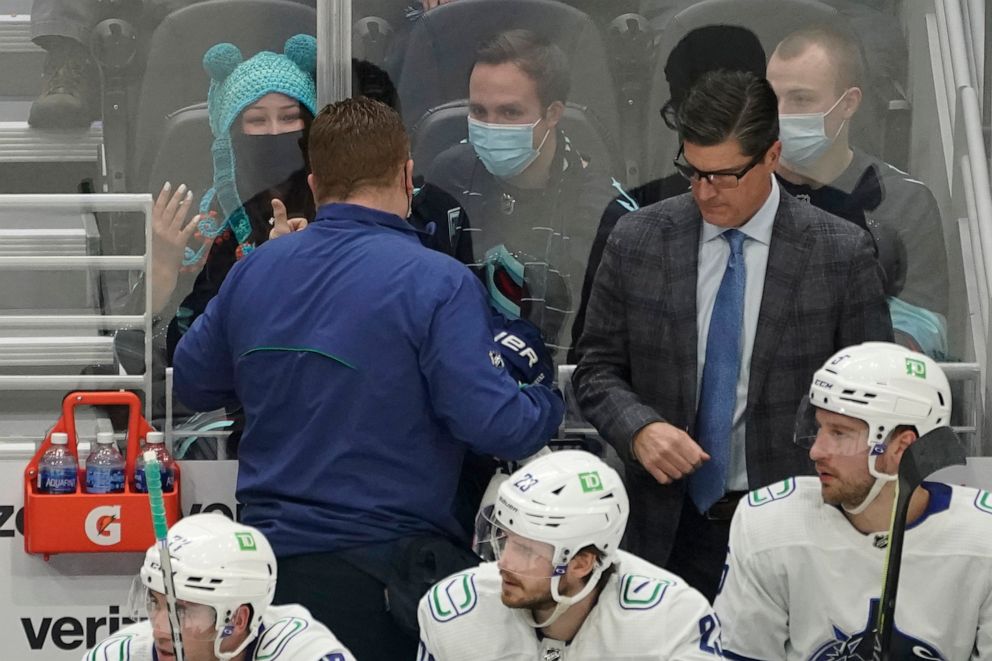 Hamilton went to the doctor and had his mole biopsied, discovering it was a malignant melanoma in phase 2, according to ESPN. He said his doctor told him the early detection saved his life.

"His line to me was, ‘I’m going to diagnose you with cancer. I’m also going to tell you that you have an angel in your life, because if you didn't get that thing out in five years, you would not be here,'" Hamilton recalled of his conversation with his doctor.

On Saturday, as the Canucks prepared to play again in Seattle, the team sent out a tweet with a letter from Hamilton asking hockey fans to help them find Popovici.

"I am trying to find a very special person and I need the hockey community's help," Hamilton wrote. "To this woman I am trying to find, you changed my life , and now I want to find you to say thank you so very much."

"The message you showed me on your cell phone will forever be etched into my brain and has made a true life-changing difference to me and my family," the letter continued. "Your instincts were right, and that mole on the back of my neck was a malignant melanoma and thanks to your persistence and the quick work of our doctors, it is now gone. ... We are looking for this incredible person and we need you to share with your friends and families to help us find a real life hero so I can express my sincerest gratitude."

#HockeyTwitter, we need your help!

Please RT to spread the word and help us connect Red with the woman he considers his hero. pic.twitter.com/HlZybgOnjf

According to ESPN, Popovici's mother, Yukyung Nelson, saw the tweet when it was reposted in a Kraken fans' group on Facebook.

"Oh my gosh!!! This was my daughter!!!" Nelson wrote. "She just got accepted into multiple medical schools. We have season tickets behind the opposing team and she noticed the mole on the back of his neck so she typed a message into her phone and knocked on the glass window to get his attention. She finally got his attention and he looked quickly and then nodded. We didn't think anymore of it. This is absolutely amazing!"

Popovici, who missed the social media commotion because she was sleeping after working an overnight shift at a crisis hotline, eventually made it to the game Saturday night, where she met Hamilton.

The internet community helped us find Brian's hero, Nadia, and tonight they met in person where he got to express his sincerest thank you to her for saving his life.

A story of human compassion at its finest. pic.twitter.com/66ogo5hB1a

She described herself as "speechless" after hearing Hamilton thank her for saving his life.

Popovici, who plans to attend medical school in the next year, said of the moment she held up her phone to Hamilton, "I almost talked myself out of it, and it's just the butterfly effect. Seriously, it’s so amazing."

"The reason for the letter (today) was that I really wanted her to know her persistence and everything she did to get my attention, she saved my life." -Brian (Red) Hamilton pic.twitter.com/XQO2ZsEAtA

Hamilton said he was glad he was able to let Popovici know that she saved his life.

"She's the person that did this," he told ESPN. "She saved my life. She needs to know her efforts were valid and bang-on, and the reaction to her efforts resulted in this coming off of my body. Imagine if you're walking around and you've saved a life, but you have no idea you saved a life? I want her to know and I want to say thank you to her."