Erica Chidi, co-founder and CEO of LOOM, a women's health education platform, is making her private health journey -- a six-year battle with uterine fibroids -- public, she said, in hopes of making other women feel less alone.

"It can be a really lonely journey, especially because fibroids are what I consider invisible obstacles, not something someone can see and have immediate empathy," Chidi, 35, told "Good Morning America." "You can feel like, 'Maybe it's not as bad. Maybe I don't need to talk about it as much, but, for me, I knew how much I was suffering and how much I was struggling and how important it felt to share about that."

Chidi said when she first started experiencing symptoms like heavy menstrual bleeding, persistent bloating and cramps and exhaustion around six years ago, she had no idea they were symptoms of uterine fibroids -- non-cancerous tumors that grow in or on the wall of the uterus or womb, according to the National Institutes of Health.

Though she had been going to her OB-GYN for annual check-ups, Chidi said it wasn't until she pointed out to her doctor a large, hard lump in her stomach that she got a transvaginal ultrasound, an imaging procedure used to examine the vagina, uterus, fallopian tubes, ovaries and bladder, according to the National Cancer Institute.

The procedure found 10 uterine fibroids, the largest being the size of a grapefruit, according to Chidi, who is also a doula and co-host of the Goop podcast. 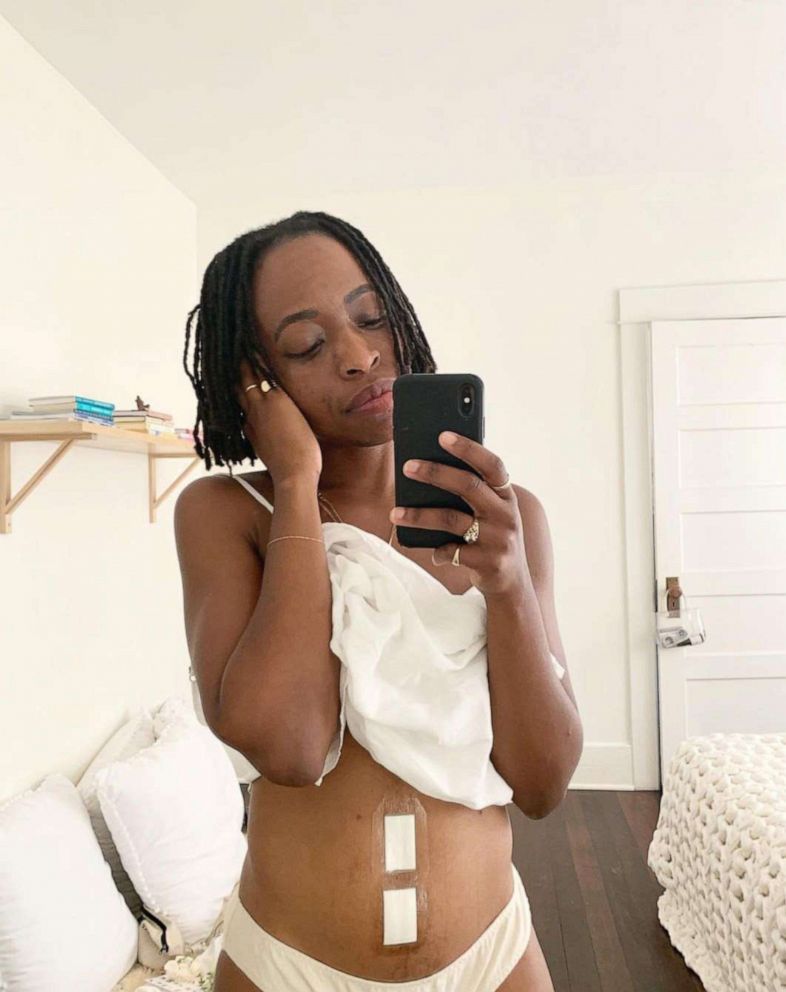 Erica Chidi
Erica Chidi is pictured while recovering from a 2019 procedure to remove uterine fibroids.

"I was really shocked by how many were found," she said. "My uterus was stretched to about 10 weeks of pregnancy ... which is why I was having so much bloating and also explaining the bleeding."

At that time, in 2019, Chidi said she chose to undergo radiofrequency endometrial ablation, a "minimally invasive surgical procedure used to treat heavy menstrual bleeding," according to the Food and Drug Administration. The procedure, which targets the inner lining of the uterus, or endometrium, may shrink but does not remove uterine fibroids. 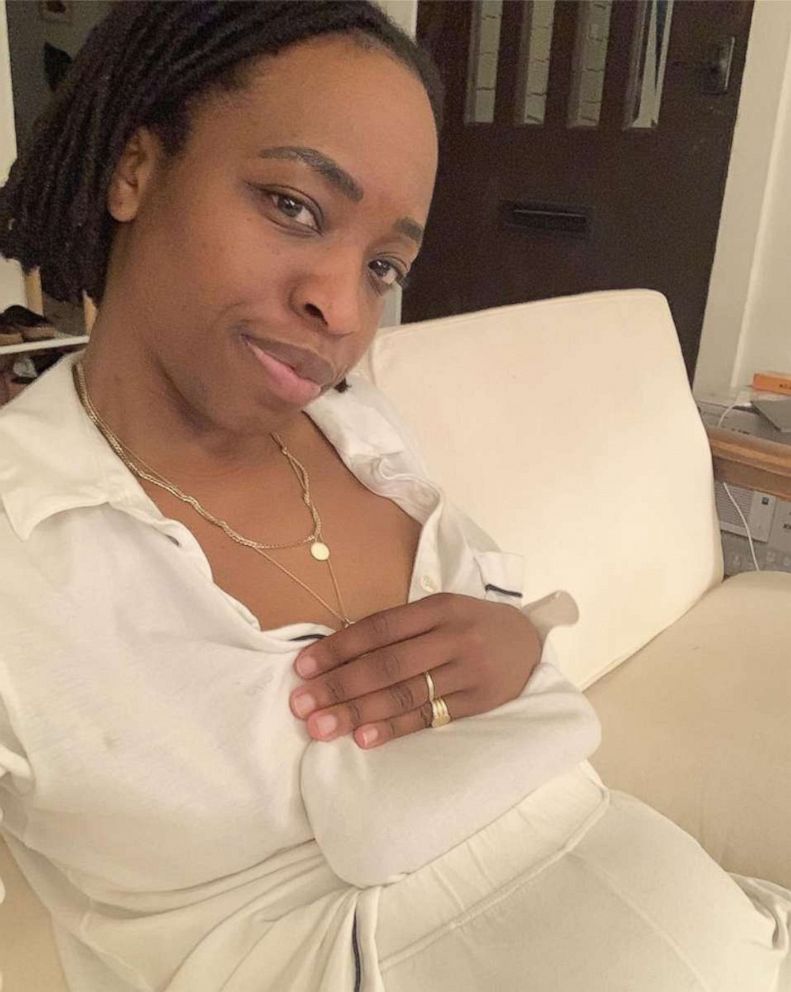 Erica Chidi
Erica Chidi is pictured while recovering from a 2019 procedure to remove uterine fibroids.

The procedure was a success, according to Chidi, but two years later, she said her symptoms of bleeding, bloating and discomfort had returned.

This time, Chidi said doctors found 23 uterine fibroids in her uterus, equivalent to the weight of a 6-month pregnancy.

"For almost two years, I was just walking around everyday feeling very much like a 6-month pregnant person, but without the amazing feeling of pregnancy," said Chidi. "Just that intense physical labor in your body without a happy ending."

Due to the growth of her fibroids, this time Chidi said she chose to undergo a myomectomy, which is a surgical procedure to remove uterine fibroids.

After undergoing the three-hour surgery in April, Chidi said she is feeling better than she has in years. 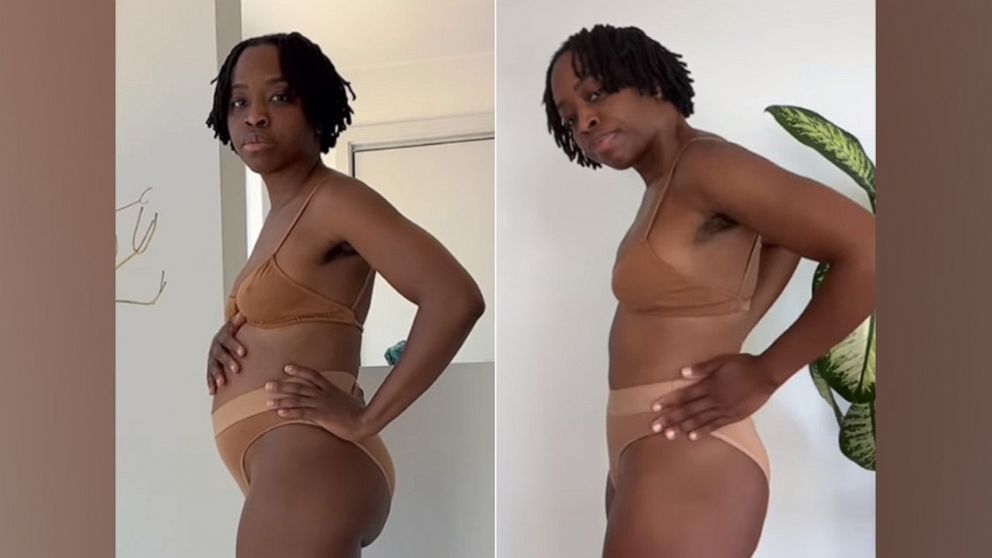 Erica Chidi
Erica Chidi, 35, is pictured before, left, and after undergoing surgery in May 2022 to remove uterine fibroids.

"The place that I was before I had the surgery had become my normal so I thought that's how I was supposed to feel every day," she said. "It's been really incredible to just slowly be reintroduced back to what my true baseline is."

Chidi said while a full recovery is expected to take six months post-surgery, she already has more energy and less bloating and heaviness inside her body.

She said once she realized how common uterine fibroids are, especially among Black women, she wanted to share her story.

MORE: Breaking the stigma of painful periods: 'They should not be debilitating'

As many as 80% of women develop fibroids by the time they reach age 50, and Black women are more likely to develop fibroids than white women, according to the Office on Women's Health at the U.S. Health Department.

"What I think is so important about having this conversation is that now there is more and more information coming forth about fibroids," said Chidi, adding that she hopes that means women are getting the "the support that they need" earlier.

Chidi said she also hopes people learn from her story to listen to their bodies and to self-advocate at the doctor's office by asking for the testing and imaging they need if there is concern for uterine fibroids.

"The sooner that you can bring it to the table the better, in the sense that there are things that can be done sometimes to help fibroids when they are really small," she said. "By the time I found mine, they were really large and surgery was going to be the only intervention that could help."

What to know about uterine fibroids

Uterine fibroids are most common in women of childbearing age, reaching their peak when women are in their 30s to 50s and then becoming less common after menopause, according to the Office on Women's Health.

Fibroids, which are typically round growths, can range in size from an apple seed to a grapefruit. The typically benign tumors may cause no symptoms in some people but debilitating symptoms in others, including stomach and back pain, heavy menstrual bleeding, longer and more painful periods, bloating, frequent urination and anemia, due to blood loss, according to the American College of Obstetricians and Gynecologists.

Miscarriages and infertility may also be symptoms of uterine fibroids, according to group.

While there is no known cause of fibroids, factors that may increase their risk include aging, obesity, family history of uterine fibroids, vitamin D deficiency, high blood pressure and no history of pregnancy, according to the Office on Women's Health.

While all women can present with fibroids, African-American women have the highest rates. Every woman should have regular and open conversations with their doctor to monitor and manage these symptoms, and treat as needed, the American College of Obstetricians and Gynecologists says.

Symptoms and treatment options depend largely on the size and location of the fibroid, according to Dr. Jennifer Ashton, ABC News chief medical correspondent and a board-certified OB-GYN.

For example, fibroids that are small and do not cause symptoms, often require no treatment.

Signs to ask a doctor about treatment for fibroids include symptoms like heavy and painful periods, bleeding between periods, infertility or concerns about the growth or type of tumor itself, according to ACOG.

Treatment for uterine fibroids may include medications to reduce the symptoms of fibroids, but ACOG notes medications like birth control pills "may not prevent the growth of fibroids."

There are also multiple surgical options for fibroids, ranging from the minimally invasive endometrial ablation to more complicated procedures like a myomectomy to remove fibroids or a hysterectomy to remove the uterus entirely.

"There are more options today than ever before," Ashton said. "When women go for their treatment options, they need to ask about all options, not just the one that surgeon can do himself or herself."