When Chloe McKnight was born 15 months ago, she had what looked like a slight scratch on her forehead, according to her mom, Ashley McKnight.

As Chloe grew, the mark grew too, becoming more prominent and beginning to resemble a red stain on her forehead, according to McKnight, from Oro-Medonte, Ontario.

At less than 2 months old, Chloe was diagnosed with a hemangioma, a noncancerous tumor made up of extra blood vessels, according to the American Academy of Pediatrics.

Hemangiomas, sometimes known as baby birthmarks, are the most common benign tumors in infants, occurring in around 5% of all births in the United States, according to the AAP. 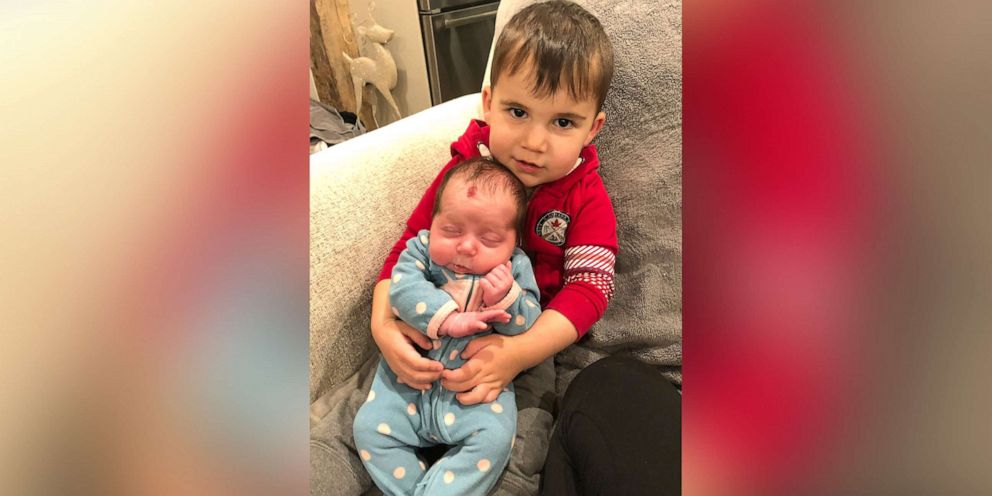 Ashley McKnight
Chloe McKnight, pictured as a newborn, was born with a hemangioma on the top of her forehead.

While most hemangiomas go away on their own, Chloe's kept growing, according to McKnight.

"It didn't look like it was reserving at all and it just gradually got larger and larger," she said. "At first it was just really flat and red, and then it started to grow in height." 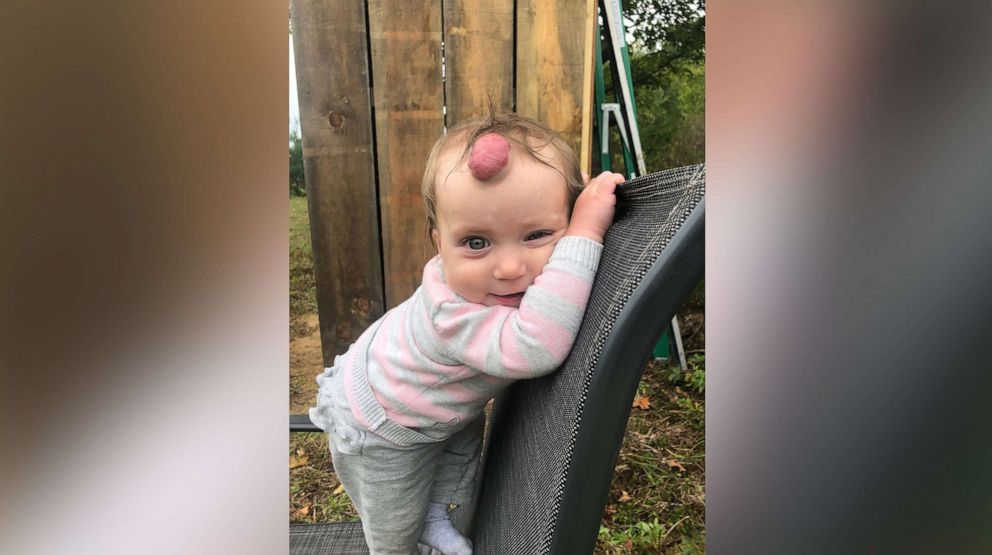 Ashley McKnight
Chloe McKnight was born with a hemangioma on the top of her forehead.

McKnight, also mom to two sons ages 3 and 5, said she extended her maternity leave out of concern for Chloe's safety.

"It's basically a tumor of blood vessels that would bleed if she were to bump it," said McKnight. "Always that was in the back of our minds, just making sure that she never hit it or anything."

As the tumor grew, McKnight said she and her husband and Chloe's brothers treated it as just part of Chloe, touching it and kissing it, but acknowledged that it drew attention in public.

"If you were going out, you would always be reminded of it because people would obviously look up and be curious and wonder what it is," she said, adding that the coronavirus pandemic helped the family to be in their "own little bubble" at home.

As Chloe got older and the tumor continued to grow, McKnight said she and her husband searched for a surgeon who could remove the tumor with as little damage as possible to Chloe's face. 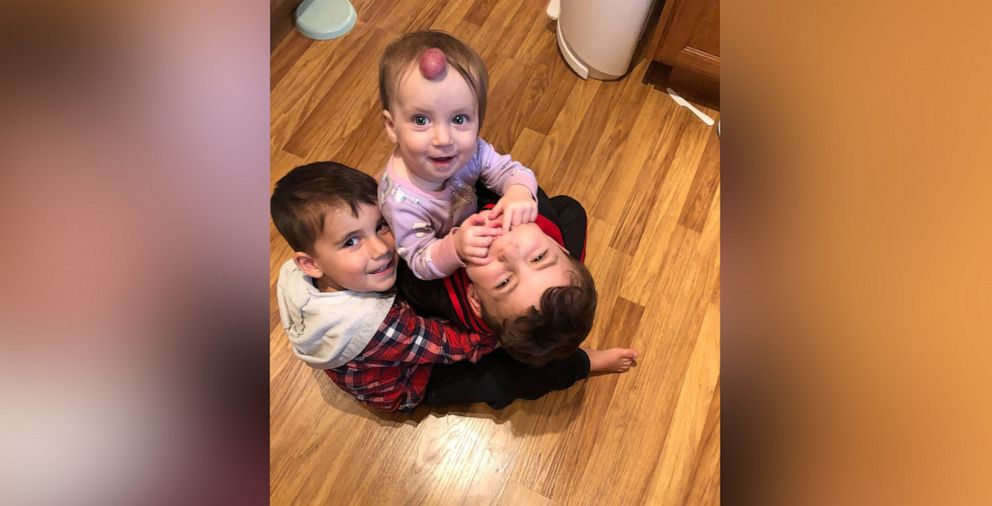 Ashley McKnight
Chloe McKnight plays with her two brothers prior to undergoing surgery to remove a hemangioma on her forehead.

Through a Facebook group for parents of children with hemangiomas, the McKnights met Dr. Gregory Levitin, director of vascular birthmarks and malformations at New York Eye and Ear Infirmary of Mount Sinai in New York City.

Levitin described Chloe's tumor as "unusually large" and one for which "there is no textbook" when it comes to operating.

"When I get these large ones, to have one on the forehead skin is an incredibly challenging area because you don't have a lot of extra tissue to borrow from," he said. "It acts like a cancer in the sense that it invades and takes up valuable tissue in the face."

In January, Chloe and McKnight traveled to New York City for Chloe to undergo surgery.

MORE: Twins who survived one of the rarest separation surgeries in the world are now thriving toddlers

Levitin removed Chloe's tumor in a three-hour surgery in which he focused on not only controlling the blood vessels in the tumor, but also making sure her face appeared the same after surgery.

Levitin was able to successfully remove Chloe's hemangioma and the recovery has been surprisingly easy, according to McKnight. 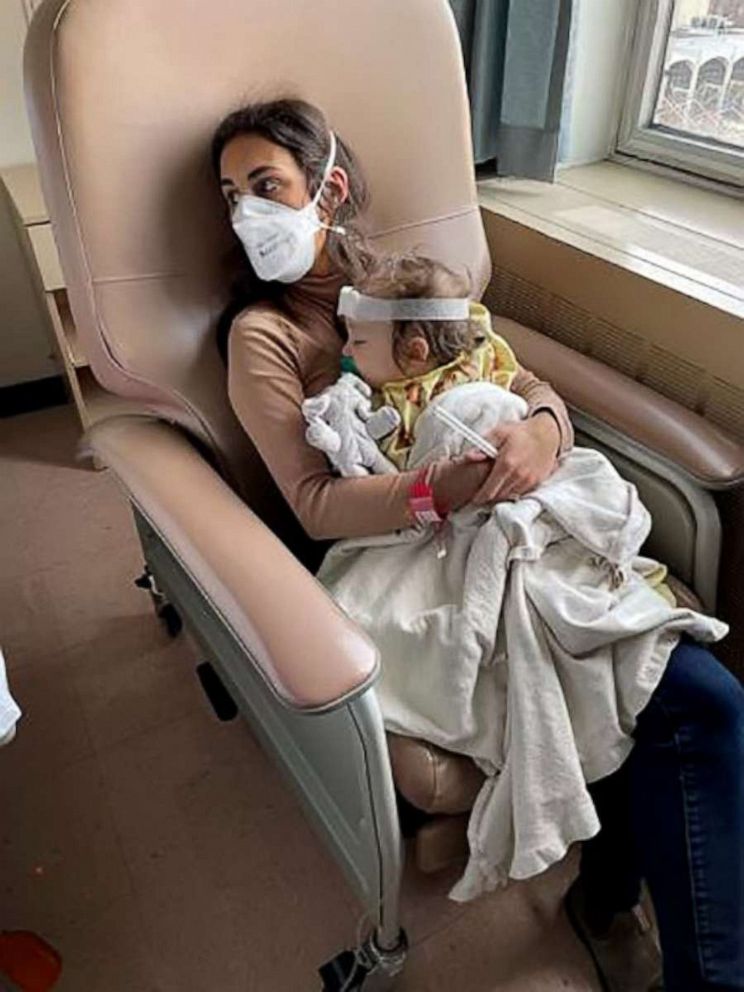 Ashley McKnight
Chloe McKnight rests on her mom, Ashley, after undergoing surgery to remove a hemangioma from the top of her forehead.

"I feel like she had a harder time with teething pain than with this whole process," said McKnight. "It made me realize how resilient children are."

While the swelling on Chloe's forehead will take more months to go down, the toddler is even more active than before surgery, according to McKnight. 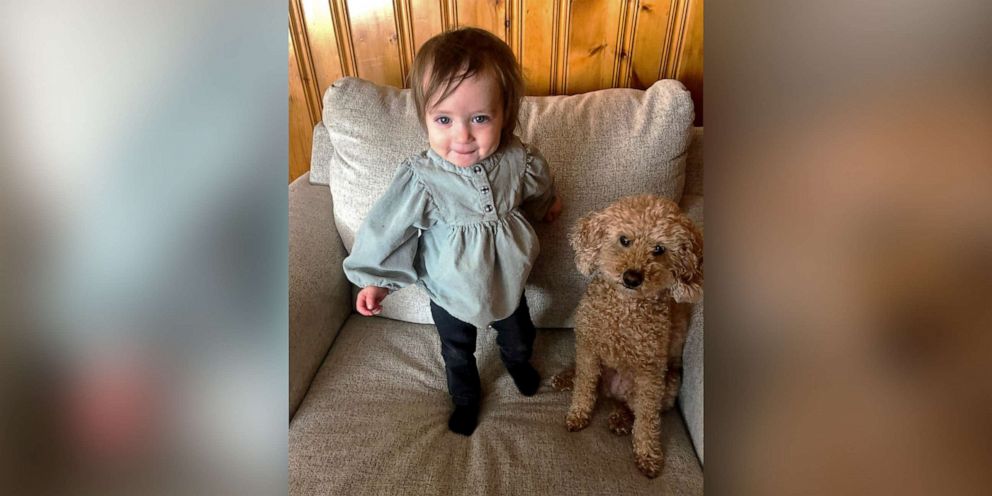 Ashley McKnight
Chloe McKnight underwent surgery at New York Eye and Ear Infirmary of Mount Sinai to remove a hemangioma from the top of her forehead.

Levitin said he often sees a transformation like that in patients because hemangiomas can be unknowingly taxing as they take up energy stores in the body.

"They take up a lot of blood volume and, in doing so, process a lot of the blood and nutrients," he said. "I hear many stories about parents who feel within 24 hours that there's been a transformation in their children's behavior and energy." 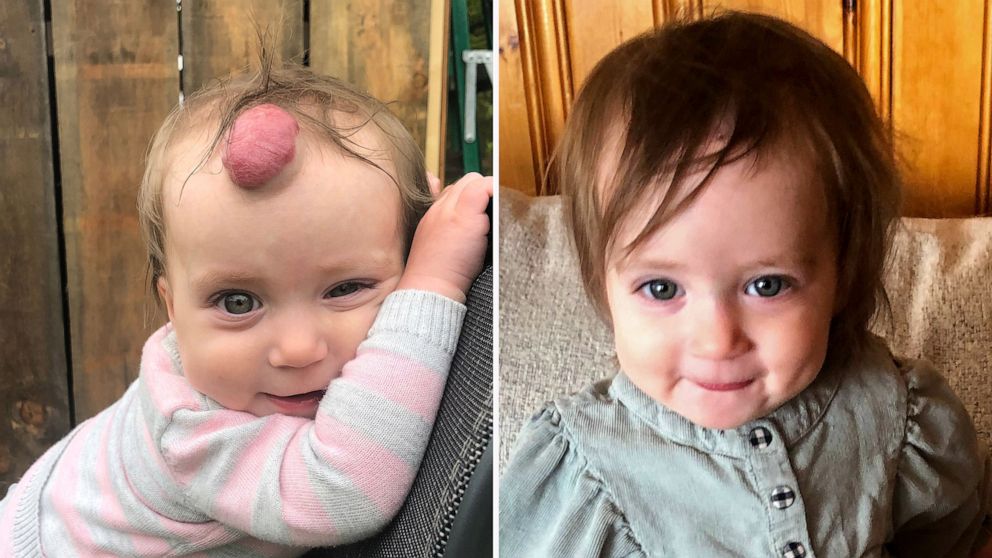 Ashley McKnight
Chloe McKnight was born with a hemangioma on the top of her forehead. In these two images, she is pictured before and after undergoing surgery to remove it.

Levitin described it as "incredibly rewarding" to be able to make such an impact on a child.

"It's an incredibly rewarding part of my job when I can take a child from a mother's arms and return her back to that mother's arms afterwards completely changed and with an appearance which is how she was first born, and now how she'll live for the rest of her life," he said.