Zibby Owens is the founder and CEO of Zibby Mag, a literary lifestyle destination, Zibby Books, a publishing home for fiction and memoir, and Zcast/Zibby Audio, a podcast network including her own award-winning show Moms Don’t Have Time to Read Books. She is the author of Bookends: A Memoir of Love, Loss, and Literature and a regular contributor to Good Morning America. Vulture called her “NYC’s Most Powerful Book-fluencer.”

There are so many wonderful books coming out in October that it’s hard to narrow them down. This month I chose humor, levity and inspiration over darkness. Why? I think we all need a boost as fall swings into high gear. Now, when we pull on those light jackets and pull up our boots, we can tuck any of these into our bag as we head off and try to keep our heads high despite whatever the winds may bring in. 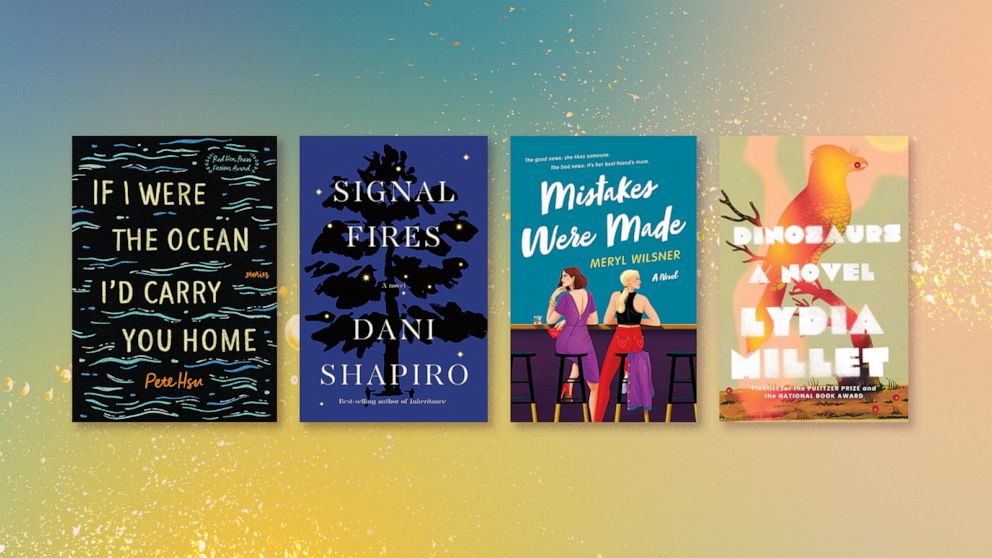 “I’m Wearing Tunics Now: On Growing Older, Better, and a Hell of a Lot Louder” by Wendi Aarons

I’m in the mood for a laugh. Aren’t you? Wendi Aarons delivers just that in her clever look at middle age starting with a museum cashier offering her the senior discount when she was in her early fifties.

“Never Meant to Meet You” by Alli Frank and Asha Youmans

From the duo who wrote "Tiny Imperfections" comes a new heartwarming novel about a neighborhood into which a new child and his attention-getting uncle arrive. Tragedy shakes the community as life expectations shudder and shake but Marjette Lewis plows through with laughter and tears.

“If I Were the Ocean I’d Carry You Home: Stories” by Pete Hsu

Pete Hsu’s debut story collection chronicles scenes from a life adrift in this reflection on the many ways we’re expected to adapt to the world today.

“The Last Chairlift” by John Irving

It’s long. But don’t let that dissuade you. Let it excite you that there’s that much new John Irving material to read. I mean, John Irving! "The World According to Garp!" "A Prayer for Owen Meany!" "The Cider House Rules!" "A Widow For One Year!" His first novel in seven years takes place in Aspen, Colorado, in 1941. It follows Little Ray, a former national skier, who moves back east to have her son. Years later, her grown son returns to the Hotel Jerome in Aspen where he encounters some ghosts. Read on. You won’t be able to stop.

“The Bequest” by Joanna Margaret

A novel set in Scotland, Italy and France surrounding the mysterious death of a professor, "The Bequest" centers on Ph.D. student, Isabel. When her old friend goes missing, but leaves a coded suicide note, it’s up to Isabel to solve the 400-year-old mystery ... before it’s too late.

“Bad Vibes Only: And Other Things I Bring to the Table” by Nora McInerny

I’ll read anything Nora McInerny writes. Her last two books, "No Happy Endings" and "It’s Okay to Laugh (Crying is Cool, Too)," tackled the loss of her young husband with humor. In the meantime, her podcast, "Terrible, Thanks for Asking," has exploded. "Bad Vibes Only" brings eagerly awaiting fans more fabulous, heartfelt, funny essays about culture, appearance, aging and more.

Listen to our past podcast here and learn about her non-profit Still Kickin’ here.

Author of twelve novels and two collections, Lydia Millet spins a dazzling tale about a man who walks from New York to Arizona and becomes enmeshed in the lives of the next-door neighbors living in the glass house.

MORE: Authors Jo Piazza and Christine Pride spark conversations about friendship and race in 'We Are Not Like Them'

“Our Missing Hearts” by Celeste Ng

Reese Witherspoon selected "Little Fires Everywhere" as a Reese’s Book Club pick and turned it into a hit show, propelling Celeste Ng from your average New York Times bestselling author to a true Hollywood celebrity. Celeste’s new book, "Our Missing Hearts," uses her deft introspection into an examination of family life that also characterized her previous work. This time, a young boy living in a dorm with his librarian father after his mother leaves them, vows to find his mom whose writing the government condemns. When he gets a letter from her, he confronts systemic obstacles in her discovery.

Attend virtually and watch me interview Celeste live with the Temple Emanu-El Streicker Center on Nov. 1 at 11:30 am.

An Amazon First Reads pick, "Token Black Girl" follows Danielle through her upbringing in a predominantly white environment. She underwent painful hair treatments, food restriction and other punitive measures to shape herself and eventually went into a career in fashion and beauty, on which she now reflects in this candid look at race in media.

Dani Shapiro is one of my favorite authors. Her first memoir, "Slow Motion," is the book I cite most often as the memoir that made me love memoirs. (And now I’ve even written one!) Inheritance, her latest memoir, was a bestseller. Now comes Signal Fires, Dani’s first novel in fifteen years, which is getting all sorts of buzz. An accident involving three teenagers on Division Street tears families apart and unites others under a veil of secrecy from which a young boy, years later, must soldier through. Dani has done it again in this poetic narrative about the heart of families.

Attend virtually and watch me interview Dani live with the Temple Emanu-El Streicker Center on Nov. 29 at 11:30 am.

Listen to our earlier podcast here.

“You Don’t Know What War Is: Diary of a Young Girl from Ukraine” by Yeva Skalietska

This is "The Diary of Anne Frank" for the current war being waged in Ukraine. It’s almost unfathomable that the war can be going on as we all sit here and read, but so be it. Now we can crack open a spine to turn our attention to a 12-year-old girl whose diary entries take us from a bunker in Ukraine to safe solace in Ireland and open our eyes more to the atrocities being endured elsewhere.

“Listening in the Dark: Women Reclaiming the Art of Intuition” by Amber Tamblyn

Actor, author, and activist Amber Tamblyn has assembled quite a cast of her own for this anthology about the need for women to listen to their fundamental truths including Samantha Irby, America Ferrera, Ada Limon and many other notables.

“Daughters of the New Year” by E.M. Tran

A debut novel about five generations of Vietnamese women, "Daughters of the New Year" relies on the astrology charts to make meaning. Contemporary daughters reveal secrets as their lives unspool to their mother and past ancestors showing how they even ended up in America.

“Tranquility by Tuesday: 9 Ways to Calm the Chaos and Make Time for What Matters” by Laura Vanderkam

I’m a bit obsessed with time. I always feel the sands of the hourglass diminishing and operate like I’m always racing against it. Sleep late? No, not a minute to waste! I’ve turned to Laura Vanderkam before to learn from her intricate time tracking system and how she helped many work from home. But now her main advice is counter-intuitive: to make a stressed, time-constrained life more bearable, add more!

Listen to our past podcast here.

“Mistakes Were Made” by Meryl Wilsner

They call this “raunch-com.” Author Meryl Wilsner’s (they/them) first chapter alone might make you blush with a scene between two women in a one-night-stand, only to discover that one is the other’s friend’s mom. Things heat up quickly in this spicy narrative written by a past fan-fiction writer turned upmarket novelist.